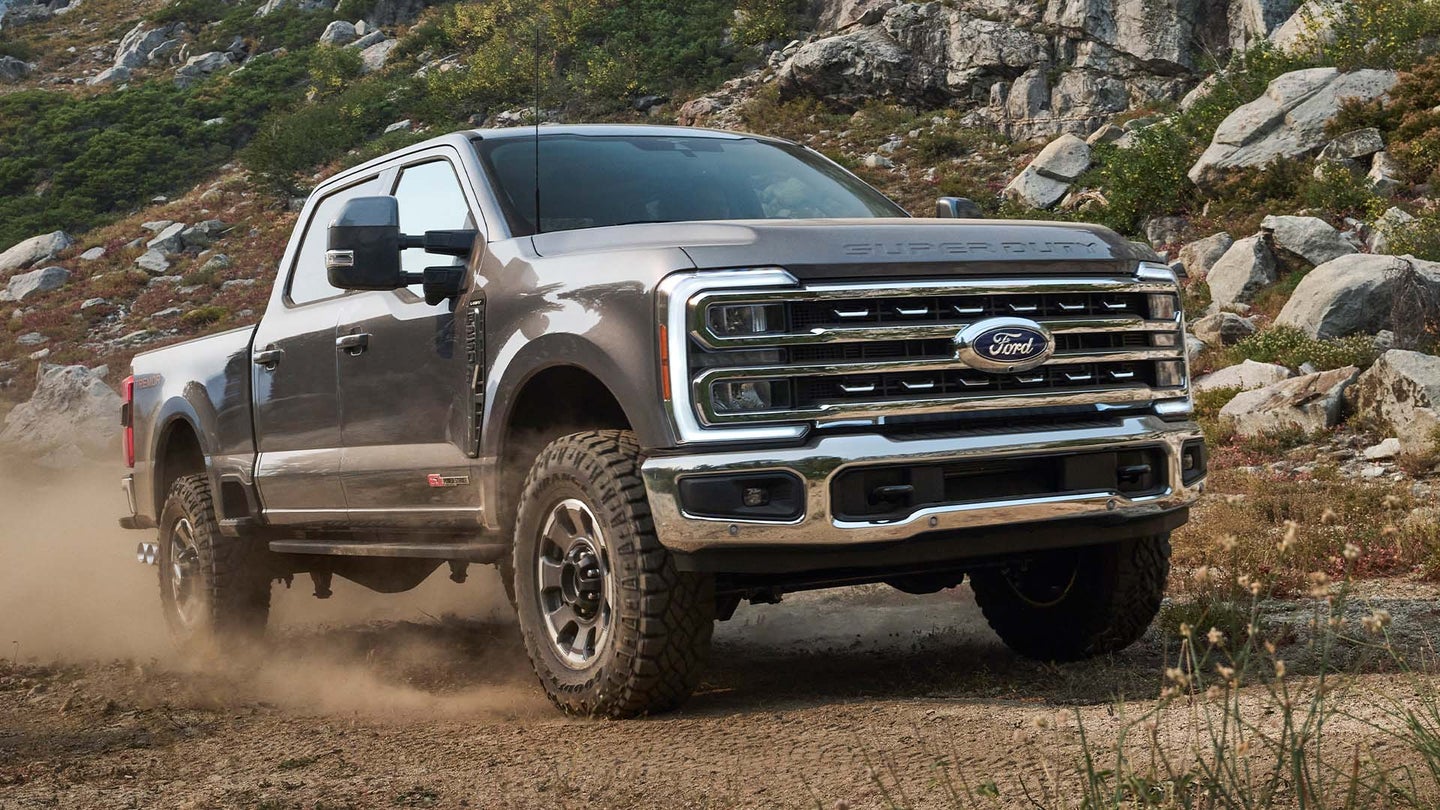 The 2023 Ford Super Duty is here, and there’s no denying it looks different from before. You can decide for yourself whether or not that’s a good thing, but it’s a great big truck that makes great big promises when it comes to work and performance. There are two new engine options, a Pro Power Onboard mobile inverter, smart towing technologies, and a ton of creature comforts on the high-end models. Let’s get down to it.

This generation’s redesign is striking—I don’t think anyone will fight me on that. We halfway knew what to expect after test mules were spotted far and wide showing that new front end with the tall headlights, but now we know what it looks like without camo cladding. Most trims have LED headlamps, though the most basic XL trucks still use halogen units. Each version has a unique grille and there are lots of available wheel options with appearance packages galore.

You might’ve also noticed the integrated bed step that’s located just behind the cab. It’s a nifty feature that used to be everywhere and is making a welcomed comeback. Think of it like an old stepside without the flared fenders.

Underneath the restyled sheet metal, Ford has four powertrain options on offer with a new 6.8-liter gas V8 serving as the base engine. It seems to be a shrunken version of the 7.3-liter that so many people have come to love, though we don’t know how much power it makes because Ford isn’t saying yet. Likewise, it’s not revealing horsepower or torque numbers for the revised 6.7-liter Power Stroke diesel or its newly introduced high-output version with a different turbo, improved exhaust manifolds, and special tuning. Ford claims the latter will have the highest numbers in its class, which would mean more than 475 hp and 1,075 pound-feet.

Every 2023 Super Duty comes with a 10-speed automatic transmission, no matter the engine, and four-wheel drive is standard on XLT trucks and above. That’s a unique approach but one that makes sense as relatively few people are buying fancier models with 2WD. If you need your truck to hit the headlining max tow and payload numbers—which Ford isn’t unveiling yet, either—then you’ll want the basic XL.

Ford spent a lot of time and effort improving the cab from a comfort and usability standpoint. Even the aforementioned XL comes with an eight-inch touchscreen as standard, while every version after that gets a 12-inch diagonal display. There’s also a digital 12-inch gauge cluster that modernizes the interior even more; it’s the first time we’re seeing this in a Super Duty, and it’s borrowed from the F-150. Max recline seats also make an appearance on top trims.

That big screen serves as the truck’s command center with 5G wireless capability, a first in the segment. That enables faster mapping as well as on-the-fly software updates that can be applied while driving down the road. An intelligent Trailer Navigation gizmo plans your driving route based on what you’re pulling, making it easier and quicker to get where you’re going with a load on. Handy onboard scales also help make sure you’re within the truck’s payload and tongue weight limits.

Really, there are a ton of doo-dads to make towing safer and easier. There are cameras at the top of the tailgate so when you drop it to hitch a gooseneck or fifth-wheel trailer, you have a clear view. If you still don’t feel comfortable turning the wheel yourself, you can use Pro Trailer Hitch assist, which backs the truck up with the twist of a knob and gets you hooked up in a cinch.

Then, once you get to the worksite (or campsite), you can plug into the Super Duty’s 2.0-kilowatt Pro Power Onboard system. It’s not as potent as the F-150 PowerBoost hybrid’s 7.2kW setup, but it still provides enough juice to run power tools and the like. Importantly, there’s no 220-volt outlet in the bed, which limits what you can power with your F-250 or F-350.

Ford will start building the new Super Duty at its Kentucky Truck Plant in Louisville and the Ohio Assembly Plant in Avon early next year. Pricing will be announced closer to the launch date. Let’s all hope that these supply shortages get sorted between then and now because, at present, they continue to dominate headlines.