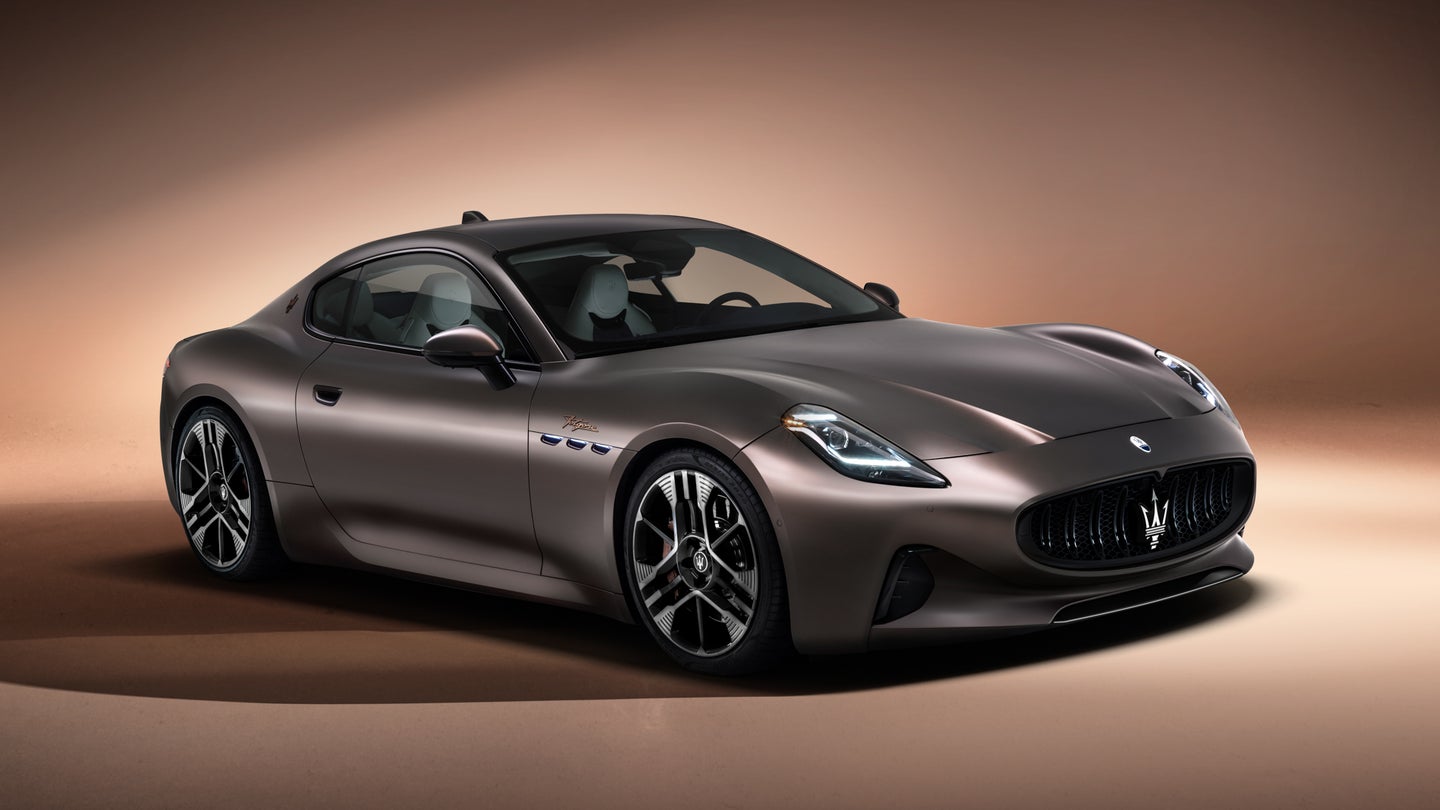 The covers are off the 2023 Maserati GranTurismo coupe and it’s about time. It’s been 15 years since the debut of the first-gen GranTurismo, which gave Maserati plenty of time to come up with a suitable replacement. At first glance, it looks like Maserati has used that time wisely, as this new GranTurismo features a new platform, a new engine, and even an all-electric variant.

Despite the 15-year gap between cars, this new GranTurismo isn’t all that different looking from its predecessor—not a bad thing. The predecessor is still a stunner today and this new one is no different. Even if the GranTurismo’s perfect two-door GT car shape remains, its all-new bodywork now gets vertical headlights, similar to the MC20 supercar, and a clamshell hood with two deep scoops. Maserati calls the hood a “cofango,” which is a cute little Italian portmanteau of “cofano” (hood) and “parafango” (fender). Whatever Maserati wants to call it, it’s a clamshell hood and the new GranTurismo features a refreshingly classic GT car shape that will only get better with age.

However, it’s anything but classic under the skin. For once, Maserati seems to be every bit as high-tech as its competition. Its new modular, lightweight architecture is made up of 65% aluminum, with some magnesium sprinkled in, and was designed from the ground up to use both internal combustion and electric powertrains. It’s also capable of all-wheel drive now, which wasn’t available on the old car.

The GranTurismo will come in two gas-powered flavors—Modena and Trofeo—but both will use the same Nettuno engine, just in different states of tune. The Modena will be the base car, with 483 horsepower, a ZF eight-speed automatic, and all-wheel drive. Stepping up to the Trofeo model gets you 542 horsepower but the same drivetrain. According to Maserati, the Modena hits 62 mph in 3.9 seconds and has a top speed of 188 mph. While the Trofeo does the same 0-62 mph sprint in 3.5 seconds and gets its top speed bumped to 199 mph.

However, unlike other Maserati models, the Trofeo isn’t the highest-performance version. Instead, that honor goes to the GranTurismo Folgore, the first electric Maserati. The Folgore model gets three electric motors, one at the front axle and two at the rear, giving it a total of 749 horsepower. Having two electric motors at the back axle, one for each rear wheel, gives it real-time torque-vectoring without the need for a limited-slip rear diff. And hooligans rejoice—Maserati will let you turn off the front motor, turning it into a rear-wheel drive, electric drift machine. Naturally, with far more power, the Folgore is the fastest GranTurismo variant and 62 mph in gut-churning 2.7 seconds and reaching a 199 mph top speed.

Providing the electric juice for those three motors is an in-house T-shaped battery pack with an 83 kilowatt-hour capacity. Thanks to its 800-volt architecture, the Folgore can charge at 270 kilowatts, which Maserati claims can provide 100 km (62 miles) of range in just five minutes. Maserati also claims that the Folgore sits lower than any other EV on the market, so hopefully it handles as well as it accelerates.

One of the more interesting things about the Folgore is its noise. Plenty of automakers are giving their electric performance cars synthetic acceleration noise, usually with some sci-fi feel, to make the otherwise silent performance more exciting. Porsche started it, with the Taycan’s spaceship noises, and BMW most recently made it more famous by hiring Hans Zimmer (The Dark Knight) to compose a sci-fi soundtrack for its EVs. But Maserati is doing something pretty interesting. It’s taking the natural whine of the Folgore’s electric motors and combining it with a synthetic noise inspired by its old-school V8s to create a sound that’s entirely fake but still somehow connected to the actual sound of the car, which could be neat. If car companies are going to make synthetic sounds, at least get creative with it, right?

Oddly, Maserati didn’t show off the new GranTurismo’s interior but it does come pretty well equipped, as you’d expect from a six-figure GT car. A 12.3-inch main screen combines with an 8.8-inch “comfort display” for your infotainment needs, while the driver gets a 12.2-inch digital gauge cluster that’s configurable with several different modes. Maserati’s digital assistance can be woken up with “Hey Maserati,” which can recognize voice commands for navigation, climate, and media controls. A digital clock replaces the iconic analog clock in classic Maseratis (lame) and it also gets a digital rearview mirror (cool). It also gets wireless Apple CarPlay, Android Auto, and Baidu CarLife.

Maserati didn’t provide any pricing or release dates but there are reasons to be excited. I’ll admit to being a sucker for Maseratis, even the bad ones. Maybe it’s because I’m Italian and I can’t resist. Whatever the reason, I’m crossing my fingers that the new GranTurismo is good and I’m especially excited for an electric grand touring car with classic Maserati looks and a unique soundtrack.