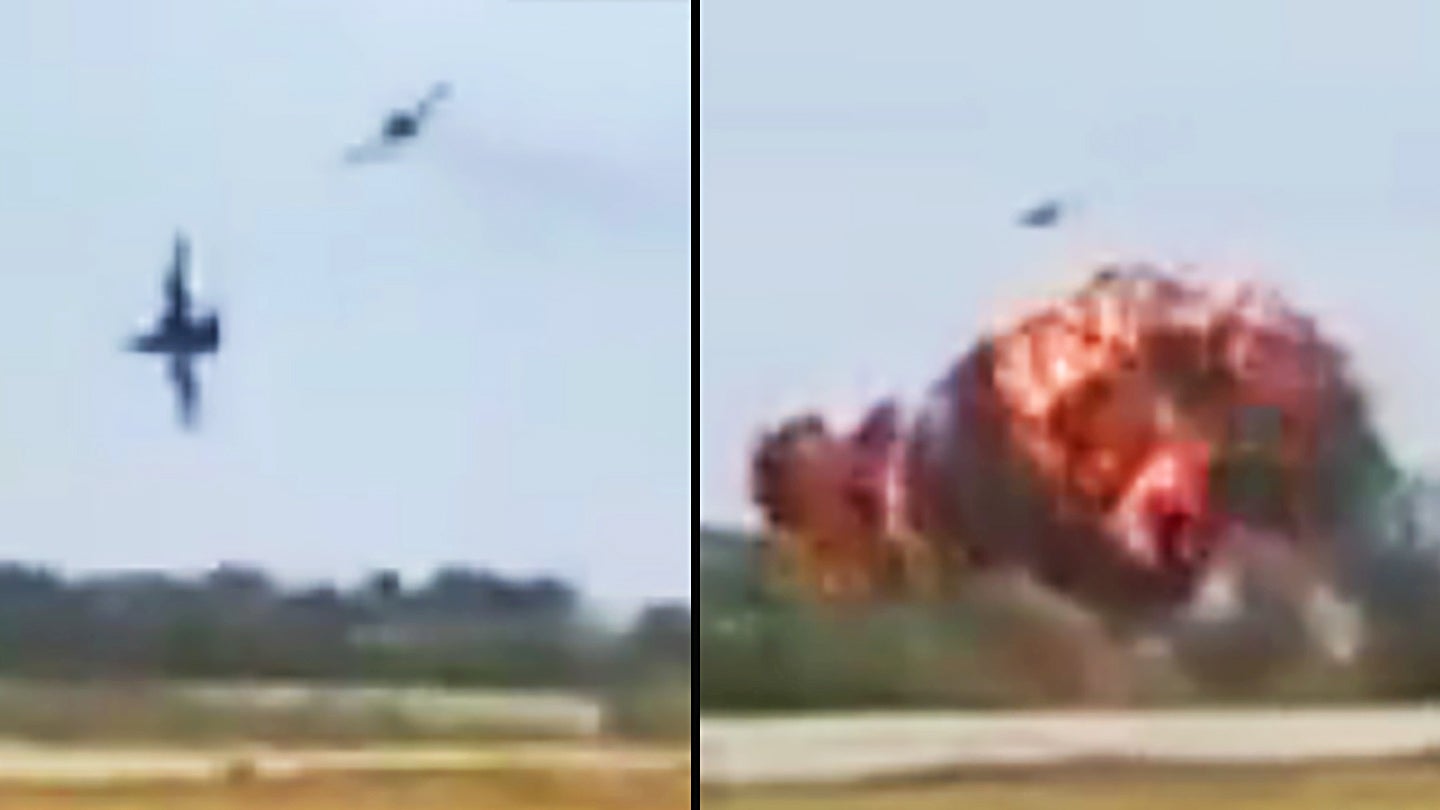 Video has recently emerged showing the fiery demise of a Russian Su-25 Frogfoot attack jet, moments after taking off from its base, apparently on a mission as part of the ongoing war in Ukraine. The Su-25 has been playing a significant role for both sides in the conflict, and losses have been high for Russia and Ukraine, a reflection of the hazardous missions these aircraft typically fly.

The incident, seen in the tweet embedded below, however, appears to be something different, with strong indications that it was the result of either a pilot error or some kind of mechanical failure. Neither of those possibilities bodes well for the Russian Aerospace Forces, or VKS, as Ukrainian troops continue to make impressive gains on the ground. There is mounting evidence of Russian airpower being overworked both in terms of personnel and platforms. This, combined, with the increasing threats they face, is having an impact on the ability of the VKS to provide useful air support.

The video in question, seen below, which is 39 seconds long, begins with two gray-painted Russian Su-25s taking off in formation. The date of the incident is unknown.

Each of the subsonic jets appears to be armed with a pair of five-round B-13 pods for 122mm (4.8-inch) S-13 unguided rockets, plus external fuel tanks, a very typical payload for this conflict. Russian ‘V’ (or possibly ‘Z’) markings on the tailfins can also be made out, these being applied for identification of Moscow’s assets, and another familiar feature of the campaign so far.

An observer on the ground watches as the jets lift off the runway and, as they make a banking turn to the left, departing the base, the second jet in the formation suddenly gets into trouble. The Su-25 decelerates as its left wing drops toward the ground. Moments later, the number two Frogfoot has crashed, leaving a fireball in its wake. There is no sign of an ejection from the pilot.

In fact, the whole incident unravels so fast that it seems the pilot may not even have had time to try and eject, at least within a survivable envelope.

As to what went wrong, we can only speculate at this point, although several analysts have already put forward possible explanations on social media. Among the potential causes is pilot error. Even a momentary lapse of concentration could have seen the second jet fly into the jet wash or wake of the lead, which could have led to a loss of control.

The pilot could also have had a moment of disorientation, as regards the respective position of their aircraft, the lead aircraft, and the ground. That could have triggered an incorrect input on the throttle, as at least one expert observer has posited. Just getting too close to the other jet and overcorrecting could have led the jet to wing into the ground as it was at low speed and high gross weight. Others have suggested that the wing of the second Su-25 could have clipped the lead jet, but that is by no means clear from the (admittedly poor-quality) video and the positioning of the jets makes this seem somewhat unlikely.

The issue of fatigue could potentially also play a factor, especially amid months of high tempo of operations from an unfamiliar forward operating base. It would certainly not be the first instance of a fatigued pilot (or member of the ground crew) making some kind of mistake or misjudgment.

Again, all this is speculation, and a mechanical problem is also very much a possibility.

Potentially, the jet could have suffered engine failure, which would account for the sudden loss of speed. There’s also no obvious sign of an engine flameout or the smoke, fire, or debris that might otherwise result from a catastrophic engine malfunction. Furthermore, a complete loss of power would require both the Su-25’s turbojets to fail at the same time although, flying low and loaded with weapons and fuel, a single engine failure could still have been irrecoverable.

Other mechanical issues could have been at play too. Six months of combat operations will have taken a major toll on the VKS tactical jet fleet and we don’t know what peacetime standards have been relaxed to keep sortie rates up.

For now, what exactly went wrong for the second Su-25 is simply unknown.

Another mystery is where the video was taken. There are few clues available, with the only other obvious features being distinctly temporary — a Mi-8 series helicopter and a scarecrow, a typical feature at Russian airbases to help reduce bird strikes.

There have been multiple suggestions online that the video was taken in Crimea, where Su-25s and helicopters are currently only found at Dzhankoy. Stefan Büttner, an expert in Russian airbase infrastructure, told The War Zone that this seems an unlikely candidate since the background scenery doesn’t fully match.

Other options where helicopters can be found operating from between the runway and main taxiway are Millerovo and Taganrog. Of these, Büttner contends that the former is almost certainly the location, also based on comparison with other videos and imagery.

It’s also worth noting that Millerovo in particular has seen Su-25 operations flown by pilots from the Wagner mercenary organization. These aircrews are typically considerably older, having returned to frontline flying after retiring from the VKS. This, too, could have been a factor in the accident. Previously, a 63-year-old retired Russian major general was reportedly shot out of the sky by a Stinger shoulder-fired anti-aircraft missile while flying a Su-25 over Ukraine, as you can read about here.

More generally, there have been recent accounts of the changing tactics that Russian Su-25s have been employing in the conflict, driven, above all, by the growing threat posed by Ukrainian ground-based air defense systems.

In recent days, defense analyst Guy Plopsky, who tweets as @GuyPlopsky and has long studied Russian airpower, has provided some very interesting inquiries in this regard.

First, based on an unofficial account from the Russian Fighterbomber Telegram channel, describing fighting in the Kharkiv area, Russian Su-25s are facing some of the highest concentrations of Ukrainian air defenses anywhere in the country. In particular, the Ukrainians have been using ambush tactics, to engage the last aircraft in a formation, after they have made their attack.

In response, Russian Su-25s are now only striking targets with known coordinates, avoiding loitering and looking for individual targets to attack. Weapons used are freefall bombs and unguided rockets, reflecting the limited precision-attack capabilities of the Frogfoot and the lack of suitable guided weapons.

Only attacking targets of known coordinates greatly reduces the flexibility of on-call airpower, especially since it relies on accurate information being available on the ground, and that any mobile targets don’t move before the Su-25s can hit them.

Overall, this unconfirmed account speaks to the malaise that currently faces the VKS, and especially the Su-25s, which are charged with the close support of ground forces.

As Plopsky observes, as long as Russia is unable to counter Ukrainian medium- and long-range air defense systems close to the frontlines, due to shortcomings in its defense-suppression capabilities, its tactical aircraft are forced to operate at low level.

“Su-25 series ground-attack aircraft reportedly typically operate at very low levels of 50 meters [around 160 feet] or less,” Plopsky notes. “This reduces both the situational awareness of Su-25 pilots and the room for pilot error.”

And, of course, it also brings the Su-25s into closer contact with Ukrainian low-level air defense systems, including newly arrived German-made Gepard self-propelled anti-aircraft guns. The latter has reportedly been particularly effective during the recent counteroffensive.

This is by no means a new phenomenon and, for some months now, we have seen Su-25s (as well as Russian attack helicopters) lob salvos of unguided rockets to minimize their exposure to such defense systems. At the same time, it greatly reduced their effectiveness as ‘flying artillery.’ You can read more about that tactic and its implications here, as well as the overall poor performance of the VKS in Ukraine so far, here.

With a steady stream of new Western air defense equipment headed into Ukrainian hands, the job of Russian Su-25 pilots is only getting more complicated.

Reportedly, the new tactics used by Russian Su-25s around Kharkiv, at least, have resulted in much lower rates of attrition. Up to now, at least 20 Russian Su-25s have been lost in the conflict, based on open-source data, making them the most at-risk of any fixed-wing VKS assets. The real number is almost certainly significantly larger.

At the same time, it is safe to assume that the level of accuracy achieved by the attack jets is dropping off, too. Just when Russian ground forces need the support of these jets the most, it seems the effectiveness of the Su-25 is being blunted by Ukrainian tactics. The loss of another Frogfoot, apparently together with its pilot, could be considered symbolic of the wider problems facing the Russian Aerospace Forces, and the soldiers that rely on them.