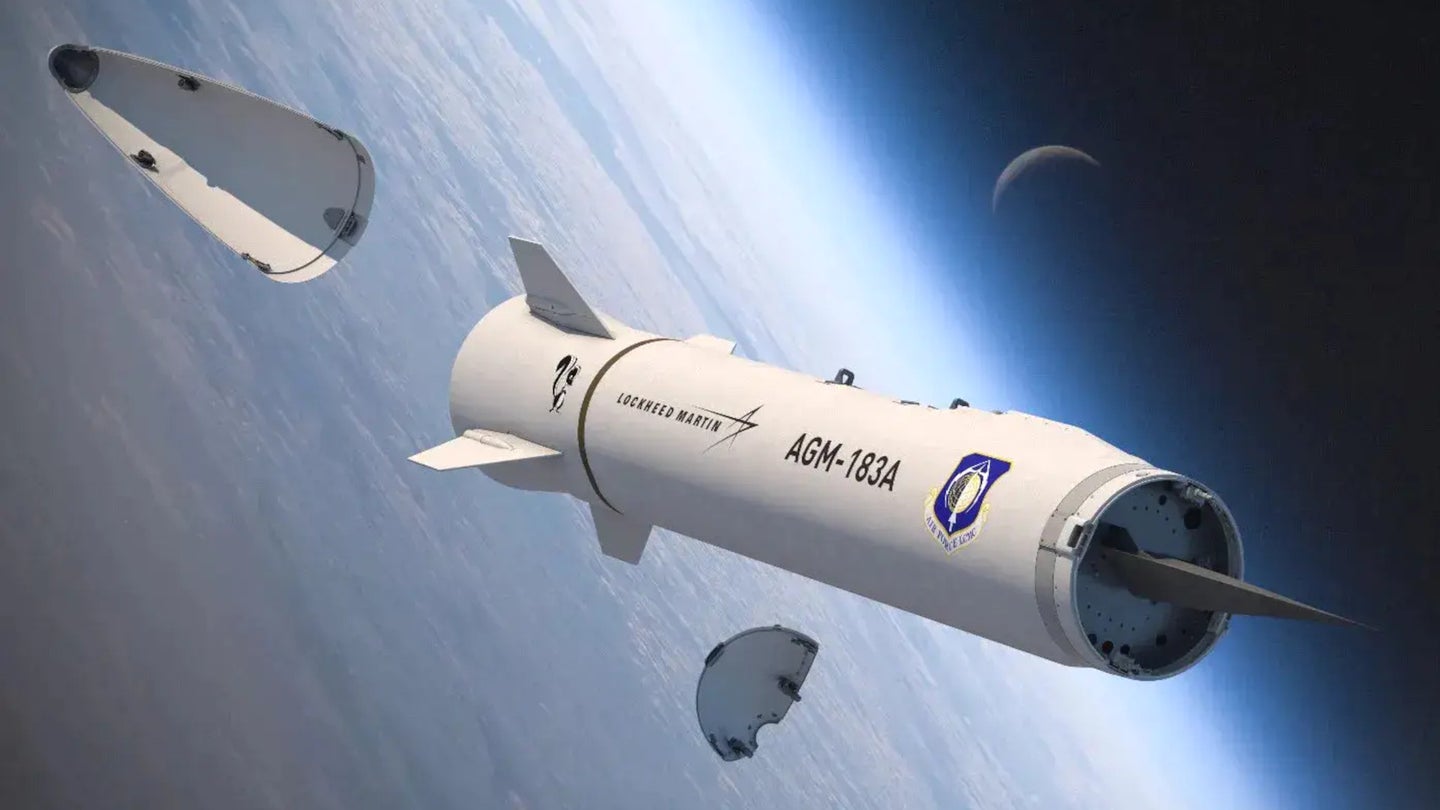 The U.S. Air Force and Lockheed Martin say that they have conducted the first successful end-to-end test of a complete prototype of the AGM-183A Air-launched Rapid Response Weapon, or ARRW. The service says that the missile successfully released its unpowered hypersonic boost-glide vehicle payload, which carried a live warhead and reached speeds in excess of Mach 5 before hitting a designated target area. This is a major accomplishment for a program that saw its initial live-fire flight testing last year marred by difficulties, which called its future into question.

The test occurred on December 9, with a B-52H bomber assigned to the 96th Test Wing launching the prototype ARRW off the coast of Southern California, according to a press release the Air Force issued today. This is the first time a so-called AGM-183A all-up round (AUR) has been live-fired in testing.

The Air Force has previously conducted a number of live-fire ARRW AGM-183A tests, but these were all focused on demonstrating the performance of the weapon’s rocket booster. The first successful booster test occurred in May. That followed two failed tests and another mis-launch that the service characterized as a partial success based on the still-useful data obtained.

“Following the ARRW’s separation from the aircraft, it reached hypersonic speeds greater than five times the speed of sound, completed its flight path and detonated in the terminal area,” the Air Force said of the December 9 launch. “Indications show that all objectives were met.”

A warning notice had also been issued earlier last week indicating a major missile test would be carried out from the Point Mugu Sea Range on December 9, which is situated off the California coast to the southwest of Los Angeles and where previous AGM-183A flight testing has taken place. Plane spotters caught a B-52H in flight that appeared to be carrying an ARRW heading toward the Pacific on the day of the launch. Various specialized aircraft, including High Altitude Observatory (HALO) Gulfstream business jets and one of NASA’s WB-57F high-altitude research planes, which have been associated with ARRW testing in the past, were tracked online flying around the test area at the time of the test, too.

As designed, the AGM-183A uses its rocket booster to propel the complete missile to an optimal speed and altitude, after which its nose cone separates and a boost-glide vehicle is released. Unlike a traditional ballistic missile, that unpowered vehicle then flies along a relatively shallow, atmospheric flight path to its target at hypersonic speeds, defined as anything above Mach 5.

The boost-glide vehicle is designed to have a high degree of maneuverability, giving it the ability to make erratic course changes along its route. This, together with its very high speed, presents significant challenges for opponents when it comes to detecting or tracking the incoming weapon. This, in turn, makes it very difficult for an enemy to react effectively, either in terms of attempting to intercept the vehicle or simply trying to relocate assets or take cover. Hypersonic weapons are very challenging to intercept due to their speed and atmospheric flight profile to begin with.

Details about the explosive warhead that ARRW’s boost-glide vehicle carries are limited. However, past reports have indicated that it is an advanced blast-fragmentation type intended to leverage the weapon’s high speed to create an especially effective hail of shrapnel.

The test last Friday is an important step forward for the ARRW program.

“The ARRW team successfully designed and tested an air-launched hypersonic missile in five years,” Air Force Brig. Gen. Jason Bartolomei, Armament Directorate Program Executive Officer, said in a statement accompanying the service’s press release. “I am immensely proud of the tenacity and dedication this team has shown to provide a vital capability to our warfighter.”

“This successful test is a result of the commitment, rigor, and dedication of the joint U.S. Government and Lockheed Martin team to develop hypersonic weapons on accelerated timelines to meet critical national security needs,” Jay Pitman, Vice President of Air Dominance and Strike Weapons at Lockheed Martin Missiles and Fire Control, said in a separate press release. “We are proud to partner with the U.S. Air Force on ARRW, and with this test, we are on the cusp of an operational capability that can be deployed to the men and women in uniform.”

However, though the AGM-183 has long been touted as being set to be the Air Force’s first-ever operational air-launched hypersonic missile, its future remains highly uncertain. Despite the progress demonstrated this year, top Air Force officials, including Secretary of the Air Force Frank Kendall, have continued to be cautious when discussing the service’s plans for the weapon going forward.

Earlier in the year, the Air Force acknowledged that it had scrapped plans to begin formal purchases of AGM-183As in its proposed Fiscal Year 2023 budget and would instead use “procurement” funds for additional research and development work. The latest draft of the defense policy bill, or National Defense Authorization Act (NDAA), for that fiscal cycle, zeroes out that procurement line item entirely, though it is unclear if equal funds for ARRW would be still approved under this legislation in a more appropriate research and development account.

“You obviously wouldn’t buy something that doesn’t work,” Andrew Hunter, Assistant Secretary of the Air Force for Acquisition, Technology, and Logistics, told reporters in July. “But even if it does work, it’s got to be the right contribution to the overall weapons mix.”

The Air Force, in cooperation with the Defense Advanced Research Projects Agency, is also currently pursuing the development of an air-breathing hypersonic cruise missile that could provide an alternative, at least in some regards, future long-range high-speed strike capability to ARRW.

All this being said, the Air Force has been taking steps clearly intended to support a possible early operational fielding of the ARRW next fall. Last week, the service announced that airmen had validated procedures for routine loading AGM-183As onto the B-52H.

Whatever the case, the Air Force has now demonstrated the basic functionality of the complete AGM-183A missile, which still has the potential to become the service’s first-ever operational air-launched hypersonic weapon.