The Sungai Besi-Ulu Kelang Elevated Expressway (SUKE) has been officially launched by senior works minister Datuk Seri Fadillah Yusof, who announced that the new highway will be open to the public tomorrow (September 16), 12.30 pm.

For now, the fully-completed Phase 1 will be accessible. This stretch spans from the unmissable signature Cheras-Kajang interchange to Bukit Antarabangsa. The portion from Sri Petaling and Kesas (where Endah Parade is) to Cheras-Kajang will open at a later date.

The toll fare for the SUKE highway has yet to be announced, however passage is toll-free for one month from its opening tomorrow. The SUKE has three toll plazas – Alam Damai, Bukit Teratai and Ampang. The latter two are in the first phase that is 16.6 km long, that is now open. 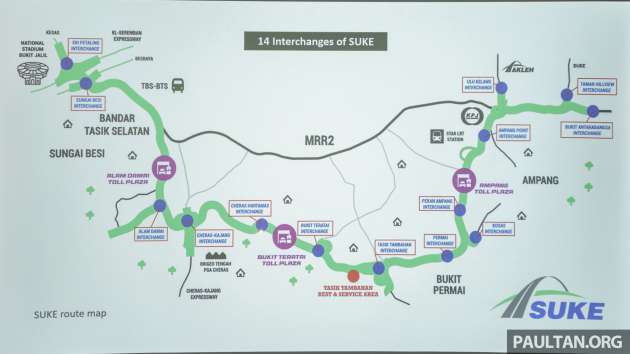 SUKE has 14 interchanges along its 24.4 km main line length (57.7 km if one includes all the interchanges), and these are Sri Petaling, Sungai Besi, Alam Damai, Cheras-Kajang, Cheras-Hartamas, Bukit Teratai, Tasik Tambahan, Permai, Kosas, Pekan Ampang, Ampang Point, Ulu Kelang, Hillview and Bukit Antarabangsa. As mentioned, the stretch that is now open is from Cheras-Kajang (on the Grand Saga, near Plaza Phoenix) to Bukit Antarabangsa.

Concessionaire Prolintas (which also has AKLEH, Guthrie, LKSA and the upcoming DASH in its highway portfolio) says that SUKE is an effective traffic dispersal solution for the eastern part of KL that is projected to relieve traffic on the MRR2 by 30%, Jalan Ampang by 36% and Jalan Loke Yew by 12% during peak hours.

SUKE isn’t just useful, but it’s unique. The 90% elevated highway has a couple of first-in-Malaysia features and a nice viewpoint. We’ve already detailed Malaysia’s first helicoidal ramp, a spiral that goes two loops at the Cheras-Kajang interchange before joining the highway. This was done out of necessity – full story here.

You’ll be joining the SUKE at its highest section. At 56.4 metres tall, equivalent to an 18-storey building, this is the third highest elevated road in Malaysia, after Penang’s Bukit Kukus paired road and the Rawang Bypass. The elevated segmented box girder that spans the crossing is also the highest superstructure so far in Malaysia – again, this was born out of necessity.

As you head towards Ampang from the CKE interchange, the KL skyline is on your left, and the hills are on your right. At Tasik Tambahan, an elevated site on the hill has been earmarked for an R&R with F&B outlets, sort of like a “SUKE Lookout Point” with a panoramic view of KL.

Another unique feature is at the Jalan Ampang area, where the bifurcated (split) structure design allows sunlight to reach the Ampang River, which has also been straightened. Sunlight is necessary for a healthy river ecosystem, so this is a good move even if it costs more. Under the highway structure is a linear park with a 1.6 km jogging trail.

Another unique SUKE feature is the imposing double-deck structure at Alam Damai in Cheras, where each tier heads in a different direction. This structure is in Phase 2, which will open at a later date.

Outside of the SUKE, Prolintas has also upgraded the Jalan Ampang stretch that runs below the new highway, as well as rebuilt buildings affected by the construction. Roads in the hilly and accident-prone Hulu Langat area were also upgraded with a new system and less severe gradient – we’ve detailed all the impact-minimising and CSR initiatives here, along with eco-friendly measures such as Green Building Index (GBI) features for the toll plazas and full LED lighting (SUKE is 100% lighted) here.

For more on the signature helicoidal ramp, the highway’s highest point and the scenic future hillside R&R – click here. Does the SUKE benefit you? If yes, how does it fit in your daily commute and what do you think of the time gained vs the toll fare? Cheras and Kajang residents, what’s your view?