Sunoco Ultratech Gasoline is Better for Your Car Because of NASCAR 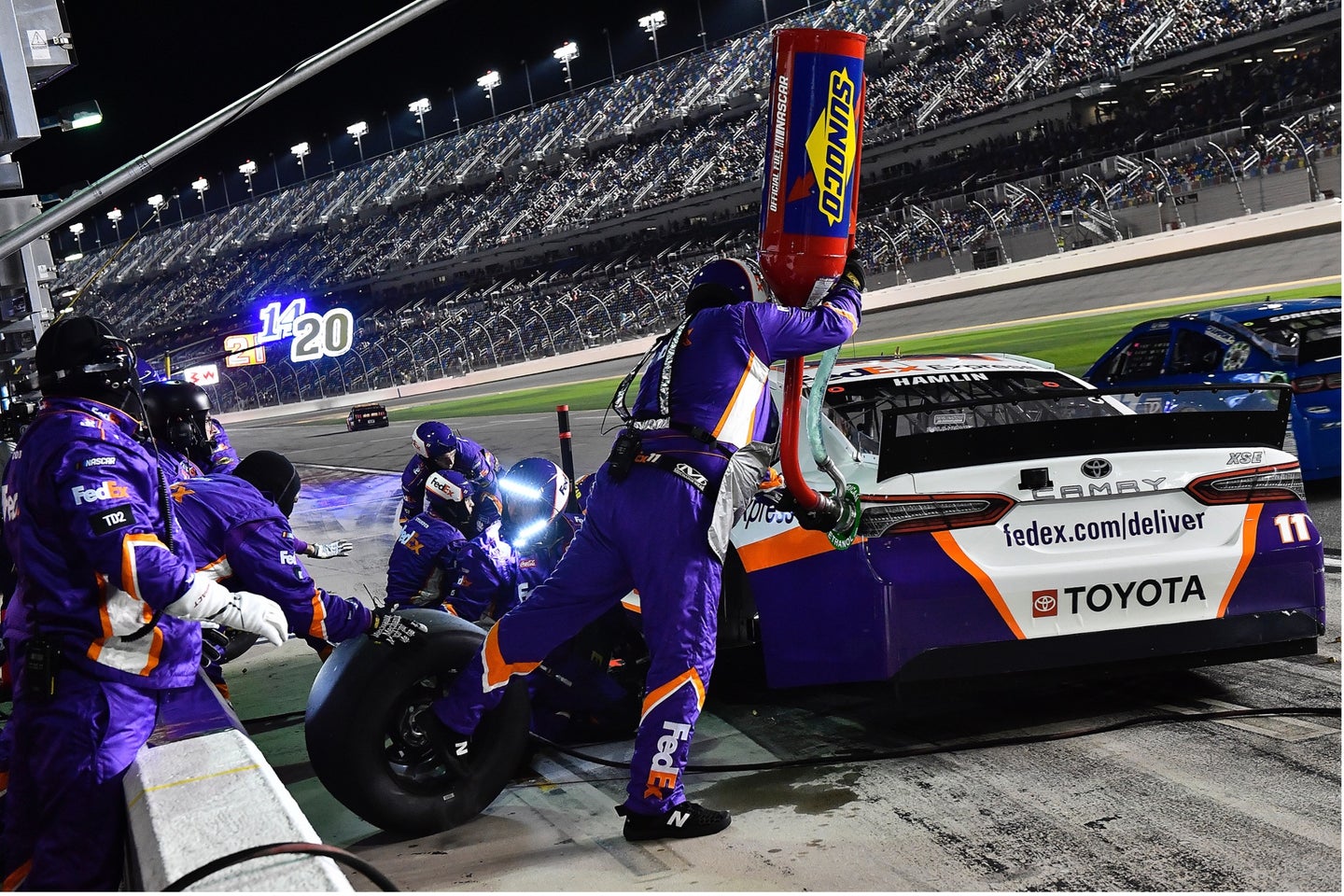 Hitting speeds over 200mph, a NASCAR Cup Series V8 runs between 7,000 and 10,000 RPM for nearly 3 hours—that’s over a million and a half revolutions. That’s just a single race, not including practice, or qualifying. Now, consider those engines must last two complete race weekends without a teardown. Your car will never see anything that extreme in its lifetime, but the lessons learned on the racetrack help your car run longer, cleaner, and more efficiently on the street.

Sunoco has been the official fuel supplier for NASCAR since 2004, but its expertise with race fuels goes back to the 1960s. Today, Sunoco Green E15, NASCAR’s Cup Series fuel, is part of the racing organization’s strategy to not only make racing better for the fans through dependability and consistency but also part of its Green Initiative to lessen its carbon footprint. All the lessons learned not only make better race fuel but distill down (pun intended) into qualities that make the Sunoco Ultratech gasoline at your local station the best it can be.

You probably don’t realize the fuel you get from the pump isn’t always the same, intentionally. Street fuel is formulated specifically for the temperature and barometric pressure of the area where it will be used. Gasoline has to be in a vapor state to ignite, so in areas that are cold and/or have higher barometric pressure, the vapor pressure is raised. Hot and low-pressure areas are the opposite. Controlling the vapor pressure and boiling point of street gasoline is vital for making cold starts possible and preventing vapor lock.

NASCAR races aren’t run in the variety of conditions we see around the country in different seasons, but those V8s have something else your road car doesn’t—a pit crew. For every race, the tune of the engine is painstakingly adjusted to optimize for conditions. Because of this, Green E15 is the same exact fuel at every track. Since these cars run right on the edge of their performance envelope, any variation in the fuel could cause a team to have a bad, and expensive day. Being able to nail the formulation of Green E15, every gallon, of every day of the season means Sunoco can deliver the exact gasoline you need, when you get it at the pump.

Octane On the Brain

The next time you hear someone describe anything but fuel as “High-Octane,” ask them what octane is. There’s a 98% chance, they have no idea. Sunoco’s Green E15 race fuel is rated at 98 AKI octane, while street gas is normally between 87 and 93 AKI octane. Here’s the misunderstood part, the higher-octane rating doesn’t mean it burns hotter or has more chemical energy, it means the fuel has more resistance to combustion from heat and pressure. Yes, the higher the octane, the more stable the fuel. Stop saying your strong coffee, spicy chicken wings, and new social media campaigns are high-octane.

NASCAR V8s are running at higher temperatures and with higher compression ratios than your street engine, that’s why they require higher octane fuel. Your streetcar may require higher octane fuel than regular unleaded, and it will normally tell you inside the fuel door or at the very least, in your owner’s manual. Running the required fuel in your car will prevent detonation and allow your engine to perform as the factory intended. However, if your car only requires regular, normally 87 AKI octane, you won’t see a performance advantage from a higher-octane fuel. Caveat emptor: a few manufacturers have begun giving different performance ratings for different octane fuels. The car’s computer can adjust everything from turbo boost pressure, to ignition timing to take advantage of higher octane fuels.

No matter how good your fuel is, it will eventually leave deposits in your fuel system and engine. That’s why Green E15 contains the same additives as Sunoco’s Ultratech street gasoline. Every aspect of performance from horsepower to fuel economy, to reliability, depends on keeping deposits out of your intake system from throttle plates to intake valves.

Detergents work like soap or what’s called a surfactant. The molecules have one end which grabs the carbon off engine components while the other end attaches to the carrier fluid, the fuel, and literally washes it away. While this certainly improves the performance of NASCAR Cup engines, several studies have demonstrated the importance of Top Tier certified additive packages in street gasoline.

Fewer Emissions Is the Mission

On the surface, a racing organization focused on getting 40 cars running 200 mph for 500 miles may not seem to have much of an environmental focus. That’s simply untrue and in 2008, NASCAR Green was launched to communicate how racing can make everyone’s cars more environmentally friendly.

Every team on the grid is using the same fuel—Sunoco Green E15, the same fuel tanks, and the same displacement engines. Maximizing fuel economy and power output per gallon have always been a priority in racing. The team that can squeeze the most power and the best fuel economy out of those set parameters is going to have the best chance of being first across the finish line.

While how much fuel you burn is the biggest factor in carbon emissions, the fuel itself can also shrink your footprint. Green E15 is a blended fuel that uses 15% ethanol. Ethanol is an alcohol made from corn, in this case, all American-grown corn. It’s reduced NASCAR’s carbon emissions by 20% since its introduction.

Your Next Pit Stop

NASCAR has trusted its engines to Sunoco fuels for nearly 20 years and over 15 million competition miles. The quality and consistency of Green E15 have not only improved the racing but also helped decrease the series’ environmental impact. Sunoco’s Ultratech street gasoline can help your car run cleaner and longer, thanks to those lessons learned at the track.

The post Sunoco Ultratech Gasoline is Better for Your Car Because of NASCAR appeared first on The Drive.