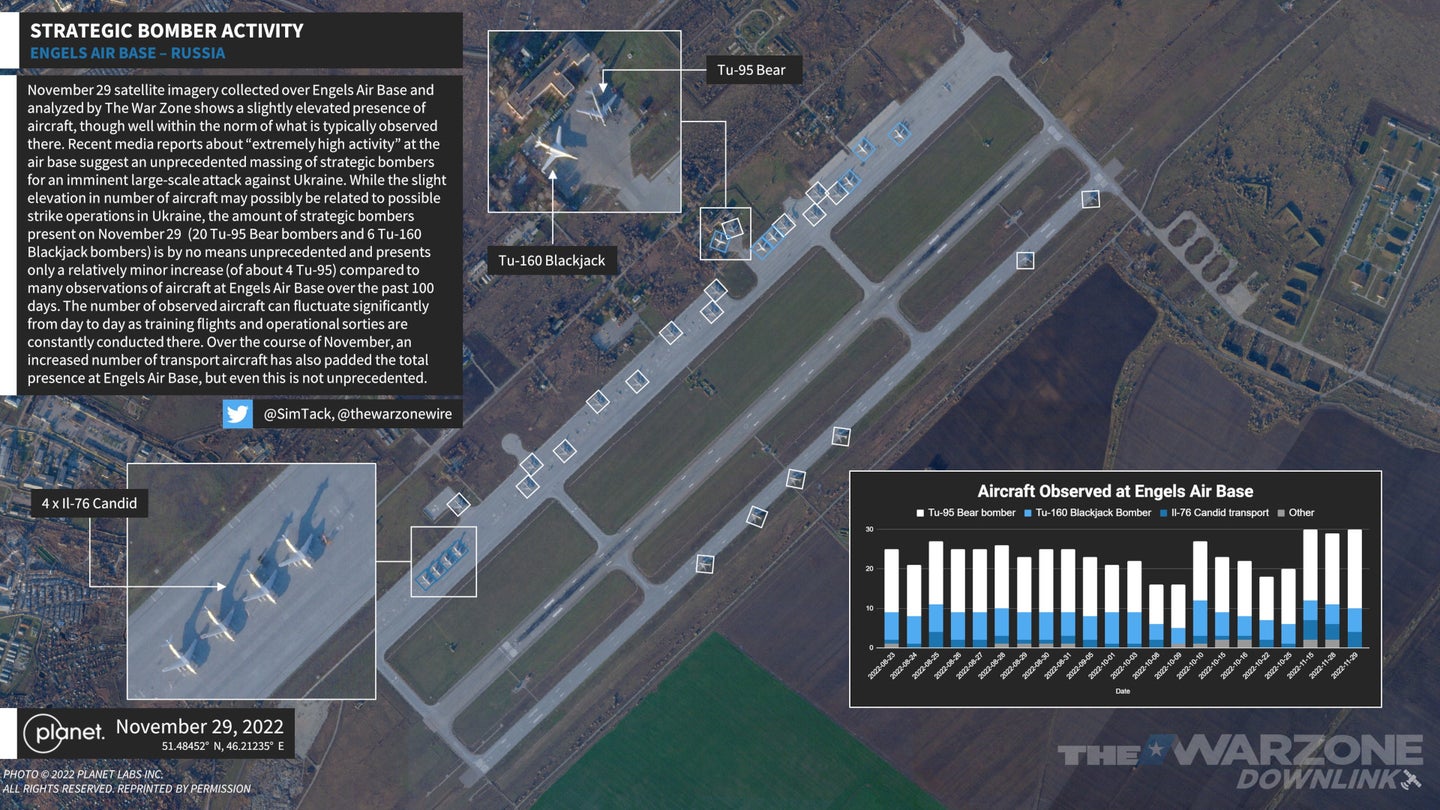 Recent satellite imagery of Engels Air Base in western Russia has shown a very near-term increase in the number of Tu-95MS Bear and Tu-160 Blackjack bombers deployed there. This has prompted a flurry of media reports that claim a new massive cruise missile strike on targets in neighboring Ukraine may be imminent. While this may be the case, additional historic imagery The War Zone has reviewed shows that the total number of bombers observed at Engels this past weekend is well in line with established trends in the force posture at this base since Russian forces first spilled over the Ukrainian border en masse in February. As such, these conclusions, based on very little data, are highly questionable if not outright unsubstantiated.

Germany’s Der Spiegel was the first to draw specific attention to the recent arrival of additional bombers at Engels, also sometimes referred to as Engels-2, focusing on images taken on November 28, which it had obtained from commercial provider Maxar Technologies. The outlet reported, citing independent experts, that the presence of 20 bombers, a mixture of Tu-95MSs and Tu-160s, represented a significant increase in activity at the base.

A subsequent review of available additional imagery from Planet Labs by The War Zone‘s Downlink team does show an increase in bombers, as well as other aircraft, at Engels this past weekend compared to earlier in November. A total of 31 aircraft, including 20 Tu-95MSs and six Tu-160 bombers, are visible in a November 29 shot from Planet Labs of Engels, compared to just 16 seen in another one taken on November 15. There has also been a notable increase in Il-76 Candid airlifters at the base in the past month or so. Other types of aircraft are also visible in the satellite imagery at the base.

In the course of Russia’s war on Ukraine, at least so far, bombers have typically been used to execute stand-off missile strikes from within Russian airspace. In terms of missile armament, the Tu-160 can carry up to 15 Kh-55 series cruise missiles or 12 newer Kh-101/102 types. The Tu-95MS can be armed with six Kh-55s or eight Kh-101/102s. There are nuclear and conventional variants in the Kh-55 family, while the Kh-101 and Kh-102 are conventional and nuclear-only, respectively. You can read more about the missiles and other munitions these bombers can carry here.

However, analysis of additional imagery of Engels dating back to May shows multiple instances where the total number of aircraft at the base was in the high 20s or low 30s. It is worth noting that unobscured high-resolution imagery of Engels is not available from Planet Labs for all days this year, but the shots the company does have in its catalog clearly call into question the idea that the total number of bombers that were seen at the base on November 28-29 reflects an unusual fluctuation in activity.

It is no secret that Engels is one of Russia’s most prominent air bases in the western part of the country and it is the permanent home to two full regiments of bombers, one equipped with Tu-95MSs and another with Tu-160s. There are often surges of activity there ahead of major routine exercises, such as the Zapad large-scale drills that have typically been held on a biennial basis across western Russia and neighboring Belarus.

As a more recent example, satellite imagery of Engels taken on October 10 showed a large number of bombers and other aircraft deployed there – 28 in total – ahead of Russia’s annual Grom strategic nuclear drills. Those drills may have been the reason that a trainload of 4×4 BPM-97 armored cars with unique turrets and other vehicles tied to Russia’s strategic nuclear forces was observed on the move earlier that month. Pictures and videos of that train that appeared on social media triggered a slew of highly speculative and unsubstantiated media reports about this being a sign of a potential imminent nuclear strike or provocation against Ukraine, as you can read more about here. To date, there do not appear to be any clear indications that what was dubbed a “Nuclear Train” had any connection, related to nuclear weapons or not, to the ongoing war in Ukraine.

This is not the first time that Russian bomber movements have been widely categorized as “unusual,” despite evidence to the contrary. In October, other reports focused on the sudden arrival of bombers at Olenya Air Base in northwestern Russia’s Kola peninsula near Norway, prompting discussions about whether this might have been a threat aimed at NATO, as well as Sweden and Finland, over support for Ukraine. At the same time, similar to the situation at Engels, these deployments were not necessarily out of the ordinary for Olenya, which is a major Russian air operations hub in the region. Concerns that Russia was about to stage provocative bomber sorties from Olenya, something that is itself not unheard of, turned out to be largely unfounded.

All this being said, given Russia’s ongoing war on Ukraine and the very real concerns about the potential for that conflict to spill over at least in other parts of Europe, even by accident, any major movement of bombers to a base like Engels is certain to draw attention. The fact that the recent increase in the number of at Engels is well in line with the known ebb and flow of aircraft at that base does not preclude the possibility that a new major round of Russian missile strikes on Ukrainian targets is coming soon. Russia’s military has been actively engaged in recent weeks in a campaign of large-scale strikes targeting Ukraine’s national power grid with a clear intent to, among other things, increase the hardships on average Ukrainians in the middle of winter.

More bombers at Engels or not, Ukraine very much remains under threat from the sky. This is a reality that the country’s foreign partners have been very actively trying to help with in recent months with the delivery and planned delivery of a number of different short and medium-range surface-to-air missile systems, including more modern types like U.S.-supplied National Advanced Surface-to-Air Missile Systems (NASAMS) and IRIS-T SLMs from Germany. Discussions are ongoing about the potential transfer of additional and more capable air defense capabilities, including U.S.-made Patriots.

So, if new large-scale Russian strikes do ultimately come in the near future, it will remain to be seen how many total missiles the Russians will employ, as well as how many actually hit their targets, and what this all might say about their total remaining stockpile. The War Zone, among others, has reported extensively in recent months about the likelihood that Russia’s inventory of conventionally-armed cruise missiles, as well as ballistic missiles, has, in some cases, shrunk to critical levels since February.

There have now been reports that authorities in Russia are looking to buy large numbers of short-range ballistic missiles from Iran to bolster their arsenal. Claims, which the U.K. Ministry of Defense subsequently indicated appeared credible, had first emerged last month saying that the Russians had even begun stripping the warheads from older nuclear-tipped cruise missiles to turn them into impromptu conventional weapons or decoys, as you can read more about here.

All told, there very much remains a possibility that the Russians could be planning to launch a new round of major missile strikes against Ukraine in the near future, but the total number of bombers, or other aircraft, at Engels Air Base does not appear to reflect any unusually significant surge in activity there.

The post Surge In Russian Bombers At Air Base Not As Ominous As Media Claims appeared first on The Drive.