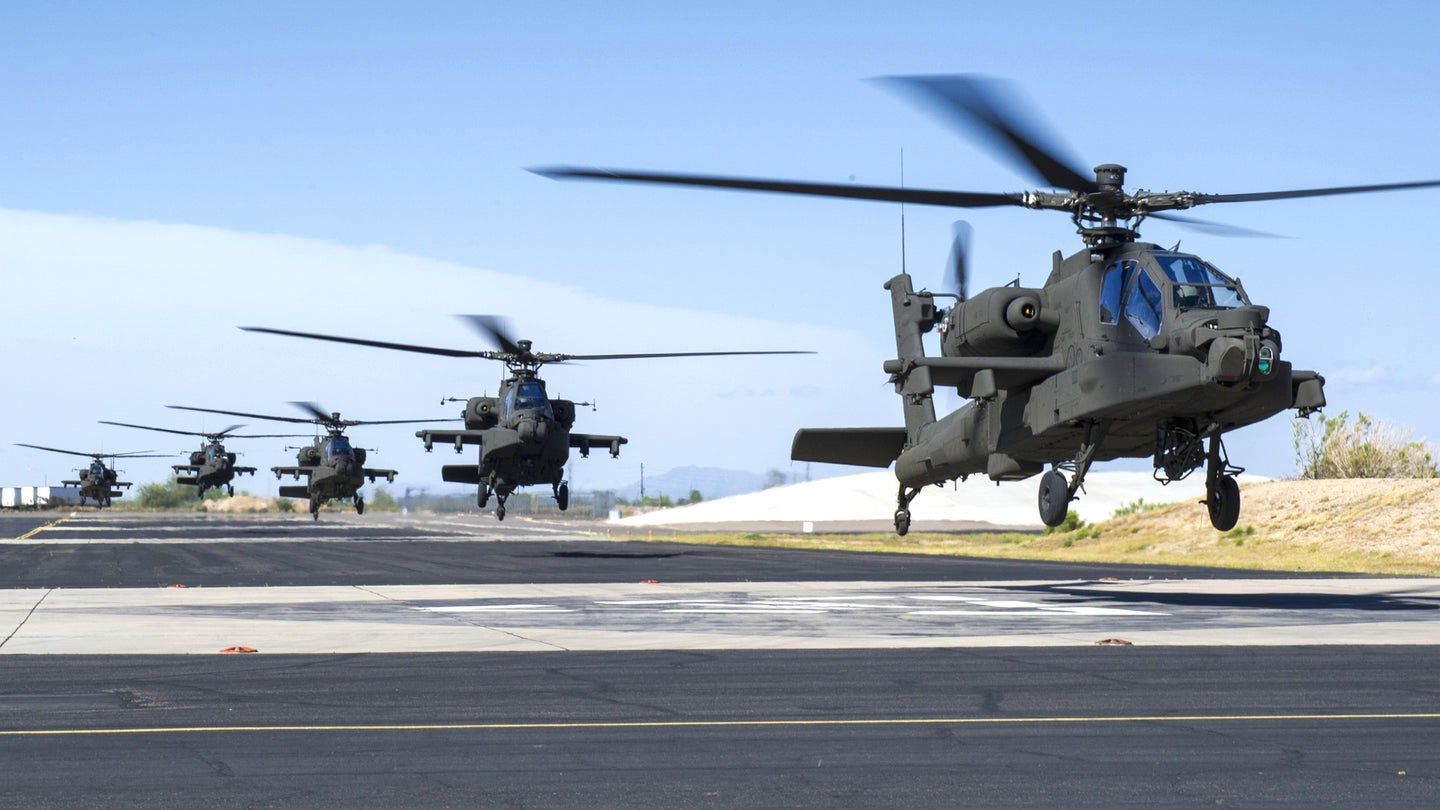 Poland says it plans to buy as many as 96 Boeing AH-64E Apache attack helicopters, which will replace its aging fleet of around 30 Cold War-era Mi-24 Hind gunships and then some. This would also make the Polish Land Forces the second-largest AH-64 operator worldwide, behind the U.S. Army.

The announcement reflects a broader multi-billion-dollar Polish military spending spree, spurred in part by the current conflict in Ukraine. Just this year, authorities in Poland have announced places to purchase of 48 FA-50 light combat jets and 180 K2 tanks, among other things, from South Korea, as well as 250 M1A2 SEPv3 Abrams tanks from the United States. This follows other major procurement programs in recent years, including an order for 32 F-35 Joint Strike Fighters.

Polish Deputy Prime Minister and Minister of National Defense Mariusz Błaszczak, who was in Germany today as part of the latest meeting of the U.S.-led Ukraine Contact Group, was the first to make the announcement about the Apache deal, via an unexpected post on Twitter earlier today. The AH-64E had been competing with Bell’s AH-1Z Viper for Poland’s long-running Kruk (meaning Raven) attack helicopter tender.

“We sent an inquiry to the USA regarding the acquisition of 96 AH-64E APACHE helicopters in the latest GUARDIAN version for the needs of the Aviation of the Land Forces,” Błaszczak said according to a machine translation of his Polish-language Tweet. “Along with helicopters, we will also obtain technology transfer.”

Apache Guardian is the formal name of the AH-64E variant.

“Boeing is honored the Government of Poland has selected the AH-64E Apache for the Polish Armed Forces’ new attack helicopter fleet. An Apache selection strengthens U.S-Polish military ties by enhancing interoperability and cooperation between Poland, the U.S. Army and NATO nations,” a subsequent press release from Boeing said. “During the procurement process, Boeing established significant cooperative partnerships across Polish government and industry. Our partnership with the Polish Armaments Group, in particular, will continue to expand as we implement training and sustainment efforts with local industry.”

From the start, Poland has hoped that the Kruk program would provide significant opportunities for local industrial participation. However, the program, which dates back to 2016, had long made only slow progress. In the meantime, the Polish Army Aviation has continued to fly its Mi-24D/V Hinds, some of which were deployed in the past on operations in Iraq and Afghanistan. These helicopters have undergone some upgrades, including night-vision goggle compatibility and improved navigation equipment, to keep them viable until a replacement can be fielded.

There had been rumors a decision regarding this program was finally imminent, but it was expected to be disclosed at the 30th annual International Defense Industry Exhibition (MSPO), which wraps up tomorrow in Poland. However, if the way in which Boeing was disclosed as the winner of the Kruk competition was unexpected, Błaszczak’s comments on how many Apaches Poland is now apparently looking to buy was a much bigger surprise. From the start, the Polish authorities have said that the Kruk program was seeking to acquire 32 new attack helicopters, essentially a one-for-one replacement for its Cold War-era Hinds.

Whether or not any of the additional 64 Apaches that authorities in Poland are now looking to buy might be intended to replace any other types currently in service, such as armed examples of the Mi-2 and W-3 light helicopters, is unclear. What the total pricetag for the greatly expanded order might be is also not clear. Australia’s recent plan to buy 29 AH-64E helicopters is expected to cost around $3.8 billion, which could put the Polish deal closer to $12.5 billion, depending on the particulars of the complete package.

Boeing’s offer to Poland was for “AH-64EV6, with MUM-T [manned-unmanned-teaming] capability,” Adam Hodges, Capture Team Lead for Vertical Lift International Sales at Boeing Defense, Space & Security, had told reporters at MSPO, according to Breaking Defense. However, “the level of interoperability will be detailed on [the] base of government to government talks, and will depend on customer requirements and US Government.”

The V6 subvariant of the AH-64E is one of, if not the most modern configurations of the Apache. The U.S. Army is in the process of bringing its AH-64E fleet up to this standard, which includes a raft of improvements and new capabilities, beyond the improved ability to work cooperatively with unmanned aircraft. Compared to earlier AH-64Es, V6 types feature an expanded suite of sensors, as well as communications systems and data-links, which improve their ability to spot and engage targets, especially during over-water operations, as well as detect and avoid threats. You can read more about the complete V6 package here.

Poland’s future AH-64Es could potentially benefit from other efforts to expand the helicopter’s capabilities beyond the V6 package. For instance, the U.S. Army is working to integrate Israel’s Spike-NLOS missile onto its Apaches, which will give them added flexibility when engaging various targets.

The Polish military’s selection of the AH-64E could possibly serve as a springboard for further Boeing rotorcraft purchases, too. The company has identified Poland as a potential customer for the CH-47F Chinook transport helicopter, to replace at least a portion of the country’s Soviet-era Mi-8T/MT and Mi-17 Hips.

The sheer number of AH-64Es that the Polish government wants to buy now underscores the country’s general drive to modernize its armed forces, something that only looks to have grown in size and scope since Russia’s launched its all-out invasion of Ukraine in February. The employment of heavily armored vehicles and various anti-armor capabilities to counter them – the latter being one of the Apache’s primary mission sets – have been central features on both sides of that conflict.

Even before the Russian invasion of Ukraine, authorities in Poland, which is a NATO member, had cited concerns about potential Russian aggression as part of justifications for military modernization and increased defense spending. The Polish government is also now faced with a new need to outright recapitalize some equipment stocks, including portions of its tank fleets, as a result of having transferred significant amounts of equipment to its Ukrainian counterparts.

If nothing else, if Poland’s current Apache plans come to fruition, its current military modernization efforts will include becoming the second biggest user of the AH-64E anywhere on Earth.