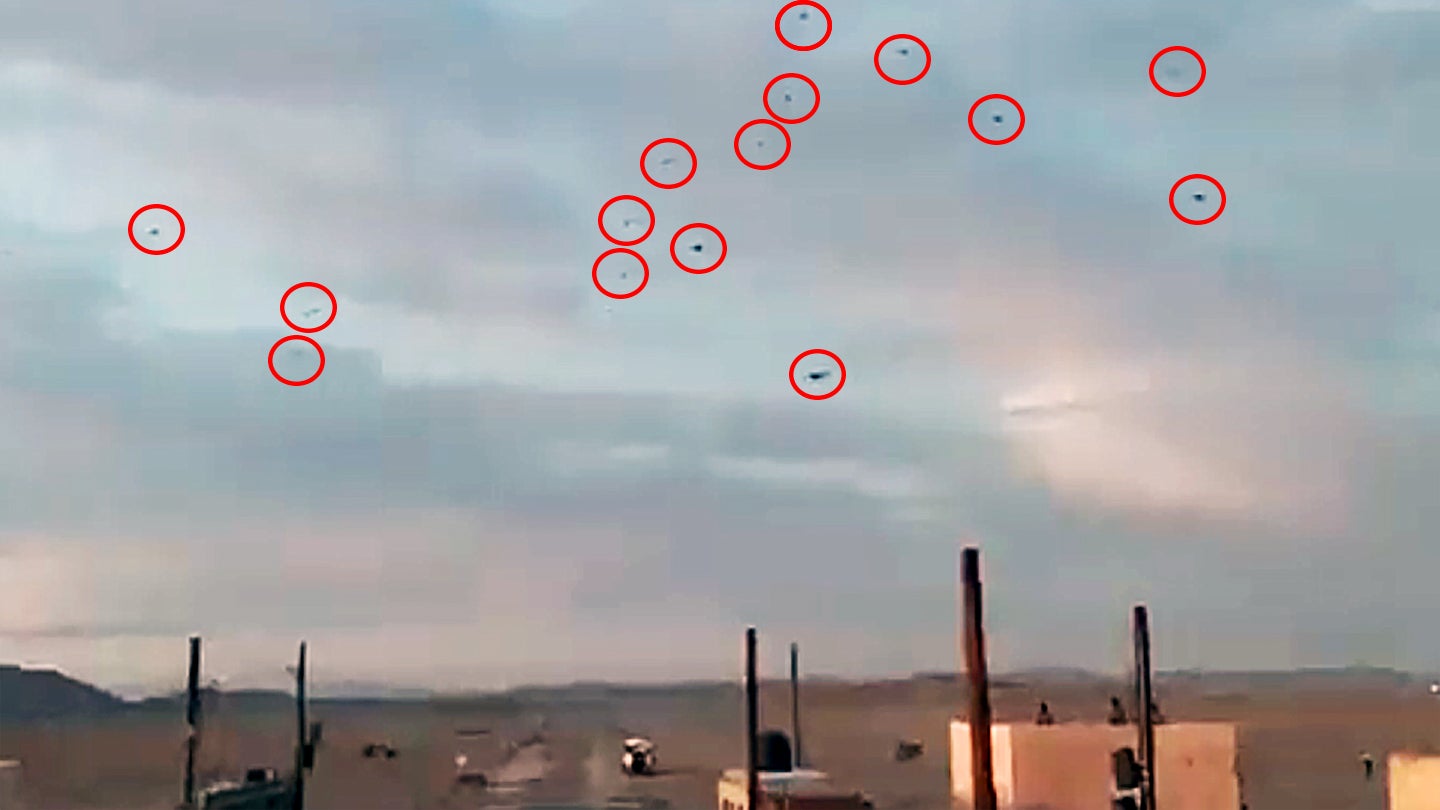 After years of more or less being in denial of a rapidly growing and uniquely problematic threat, the battle of Mosul six years ago saw homemade explosive-laden drones constantly attacking friendly forces. This forced the Pentagon to begrudgingly accept this new ‘democratized’ weapon of warfare for which it had little defense — small and easy-to-field weaponized drones — as a major threat. Since then, the U.S. military has been running flat out trying to catch up to what is a rapidly evolving range of capabilities that are now causing havoc on battlefields and beyond. One ominous video posted by the commander of the U.S. Army’s National Training Center sums up what our troops are going to be facing in the future and how the military is racing to prepare for it.

Brig. Gen. Curtis Taylor posted the video on Twitter under his official account, with the caption stating:

“At sunrise this morning a swarm of 40 quadcopters all equipped with cameras, MILES, and lethal munition capable launched in advance of 11th ACR’s [11th Armored Cavalry Regiment] attack on a prepared defense by 1AD [1st Armored Division]. Drones will be as important in the first battle of the next war as artillery is today.”

The video definitely gives off a stark sci-fi vibe with dystopian overtones. A charge at dawn using, in essence, flying robots, also reinforces just how much things have changed in a relatively short period of time. The setting is a military operations in urban terrain (MOUT) facility, one of a number of elaborate training grounds at the National Training Center (NTC), which lies adjacent to Fort Irwin in California.

As the general noted, the barrage of drones is part of a simulated attack by the 11th Armored Cavalry Regiment (ACR) on elements of the 1st Armored Division that have been exercising at the NTC deep in California’s Mojave Desert. 11th ACR is the resident opposition forces (OPFOR) unit — basically the aggressors — who mimic enemy tactics, capabilities, and hardware. The unit has decades of experience in causing trouble for visiting units as they play the bad guys under a huge range of scenarios and circumstances splayed out across the sprawling NTC. Perhaps they are best known for their highly modified vehicles and camouflaged helicopters they use to masquerade as the enemy.

The job of the 11th ACR has only become much more complicated in the digital age, including everything from cyber and advanced electronic warfare to, yes, drone swarms. While there have been many testing and developmental exercises where large groups of drones are used, including at the NTC, a video of a 40-drone swarm deployed at the hands of OPFOR certainly is a site to behold.

The fact that the drones are fully integrated with MILES — the long-evolved ‘laser tag’-like Multiple Integrated Laser Engagement System that allows for simulated kills and casualty scoring across the NTC – is quite impressive. As the general states, these can simulate suicide drones and can play the role of deadly weapons in their own right.

Countering such a swarm remains a major problem. Depending on the concept of operations, electronic warfare remains one of the best bets, especially for countering large groups of drones spread out in the sky, but everything from kinetic means — missiles and guns, as well as even other drones — to lasers and high-powered microwaves are deep in development or beginning to be fielded on a wider basis.

The problem with missiles, guns, and even lasers is that they can only knock down a single drone at a time, so being overwhelmed and your defenses quickly overrun is a very real proposition, especially considering the relatively low barrier to entry. Drones that use man-in-the-loop control systems — basically, someone is flying it remotely — are easier to counter than an autonomous swarm as they rely on a direct and persistent two-way communications link that needs to maintain line-of-sight. When drones themselves pick and prosecute targets cooperatively and autonomously as a group, with little or no real-time human direction, things get much more challenging. Think hive mind here that can adapt on the fly to maintain its maximum potential. It is a very resilient and very troubling threat to counter. This capability is not science fiction and will increasingly be something to worry about, especially when facing a peer adversary like China which has been actively developing it in various forms for years.

Regardless, it is very encouraging to see the Army prioritize confronting a swarm attack during high-end training. It’s unclear how regular the use of mock drone swarms at the NTC is, but the Army has employed what appears to be a similar 40-drone ‘system’ there on multiple occasions since 2019. A team led by the COLSA Corporation operates that swarm under contract to the service’s Threat Systems Management Office (TMSO), part of the Program Executive Office Simulation, Training, and Instrumentation (PEO STRI) at Redstone Arsenal in Alabama.

The COLSA Corporation says that this swarm was the first to receive a formal approval for use from the Army and has also been employed on other test and training ranges. Army OPFOR elements also employed a mock drone swarm at the Joint Multinational Simulation Center (JSMC), part of the service’s 7th Army Training Command in Germany, back in 2017, but it’s not clear if this was the swarm developed by the COLSA-led team. The use of the swarm at JSMC was said to be a first-time event, though it’s unclear if it was the first time such a system had been employed in any Army exercise or if this statement was specifically limited to training conducted by this center in Germany.

We have reached out to the Army for more information about its use of drone swarms in training exercises.

Low-end swarm OPFOR is in some ways even more important than traditional land-combat OPFOR as it is a much more foreign threat for soldiers to confront. Thus, not just emulating it to a limited degree, but being able to stress test frontline units so that they can know what to do if a swarm were to attack is certainly a very important capability to have.

Obviously, there are implications of these types of attacks far from an active battlefield, as we have warned of for many years. This video is somewhat well timed as it was released on 9/11. One could easily argue that the next 9/11 is most likely to come from a drone swarm attack than any other physical threat.

The post Swarm Of 40 Drones Over Fort Irwin An Ominous Sign Of What’s To Come appeared first on The Drive.