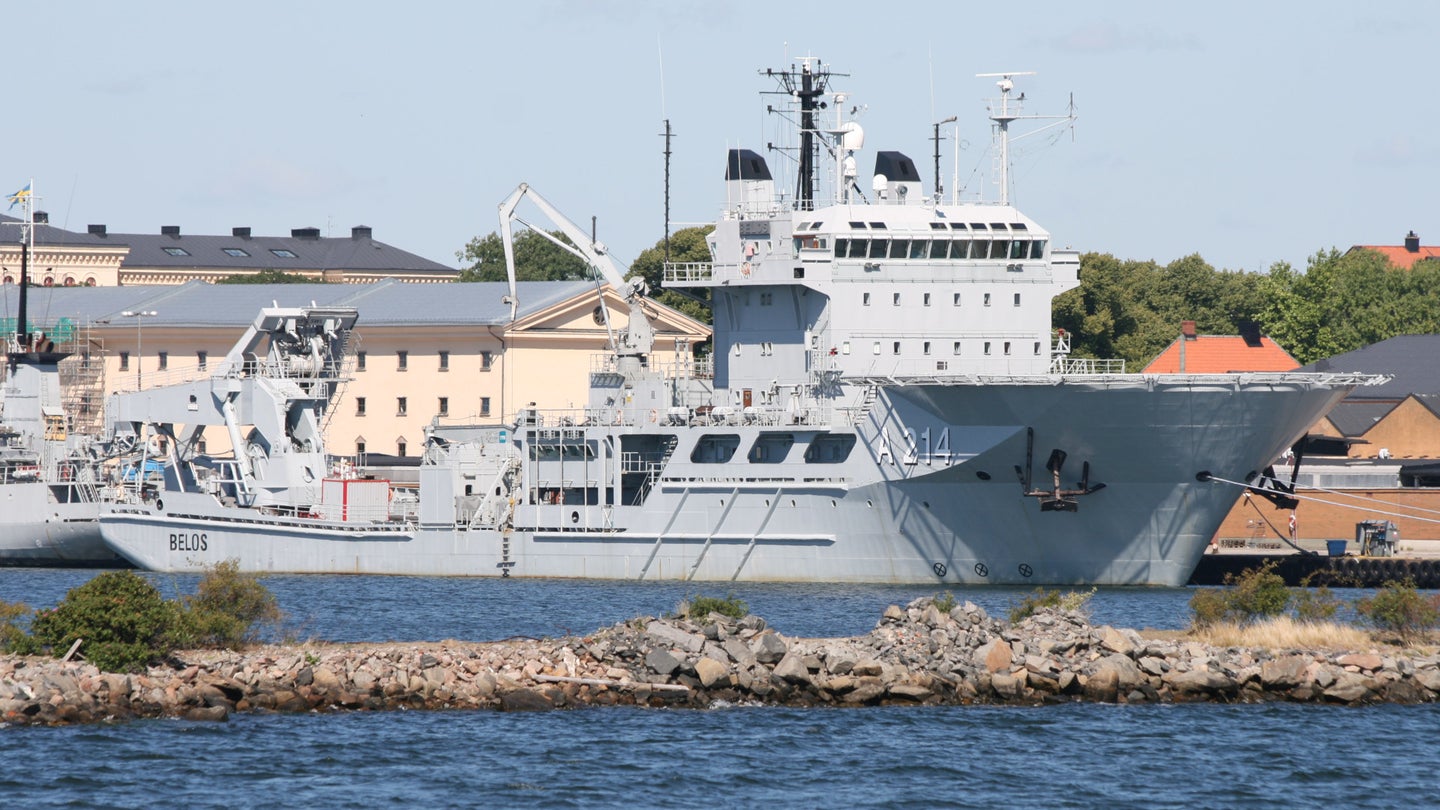 The Swedish Navy is deploying a submarine rescue ship capable of carrying out specialized deep-diving missions as part of its ongoing response to the all-but-certain sabotage of the two Nord Stream underwater gas pipelines in the Baltic Sea last week. Authorities in Sweden separately said that there looked to be a curious and unexplained increase in gas flowing out a breach in one of the pipelines, despite expectations that the contents of both lines would have entirely escaped by this point. Russia, which has denied implications that it was responsible for the apparent attacks and has accused the West without evidence of carrying them out, now says that a portion of the Nord Stream 2 line may still be operable.

Swedish Navy Capt. Jimmie Adamsson told the Associated Press earlier today that a submarine rescue ship would join elements of the country’s Coast Guard that have been monitoring the gas bubbling to the surface from the ruptured pipelines and helping ensure vessels can safely navigate through the area since last week. Though the submarine rescue ship was not named, Sweden’s Navy only has one vessel dedicated to this mission, the HSwMS Belos.

HSwMS Belos was originally built in the Netherlands as an offshore support vessel before the Swedish Navy purchased it in 1992 and converted it into a submarine rescue platform. The ship, which has since received additional upgrades, can employ deep-diving remotely operated vehicles (ROV) and deploy the rescue submersible URF, among other capabilities. As such, the ship is ideally suited for supporting various deep-water salvage and other similar activities, in addition to carrying out submarine rescue operations.

The Associated Press’s report said it was unclear at this time whether the HSwMS Belos might immediately begin any kind of underwater survey after arriving at the site of the pipeline breaches, but Swedish authorities have launched an investigation into the incidents. It’s hard to see any other reason for deploying this ship in this context and there is a clear need to get close-up looks at the pipelines and the surrounding areas of the seabed to do any real investigating.

At present, what is known is that at least four separate breaches in the Nord Stream 1 and 2 pipelines – two in each pipeline – were detected last week after a series of large underwater explosions were recorded. All of the ruptures occurred in international waters. However, two of them affected sections of the pipelines that lie in areas within Sweden’s declared Exclusive Economic Zone (EEZ) in the Baltic Sea, while the other pair is situated inside Denmark’s EEZ.

Danish authorities said over the weekend that gas appeared to have stopped flowing out of the holes in both the Nord Stream 1 and 2 pipelines. Today, the Swedish Coast Guard said that amount of gas coming from the smaller of the two breaches in the Nord Stream 2 pipeline appeared to have increased for unknown reasons and said it was unclear when it might actually stop. Last week, multi-national firm Nord Stream AG, in which Russian state gas company Gazprom has a controlling stake and that operates both pipelines, said it expected the flow at least out of Nord Stream 1 to have stopped by today.

The exact circumstances behind the pipeline incidents are still murky. In a rambling and fiery speech decrying the West ahead of announcing the annexation of occupied Ukrainian territory last week, Russian President Vladimir Putin had accused “Anglo-Saxons” – very likely intended to refer to the United States and the United Kingdom, at least – of attacking Nord Stream 1 and 2. Authorities in Russia, who say they are conducting their own probe into the incidents, have not provided any hard evidence to support these allegations. The U.S. government has vehemently denied any involvement.

The European Union (EU), NATO, and various individual members of those organizations, have now said that all the available evidence points to the ruptures being the result of deliberate attacks. However, at the time of writing, there still appear to be no formal accusations against Russia or any other actors, though fingers are increasingly pointing at Moscow.

Russia has a long history of weaponizing energy resources to advance its geopolitical aims, and Gazprom had completely halted the flow of gas through Nord Stream 1 in August, ostensibly due to maintenance issues. The amount of gas moving through that pipeline had already been throttled earlier in the year in what appeared to be a retaliatory move over Europe’s response to Russia’s invasion of Ukraine.

Whatever, the case, Gazprom issued a statement today saying that Nord Stream 2 may still be operable. The Nord Stream 2 pipeline is actually comprised of two parallel lines, one of which the Russian state gas company says appeared to be untouched. There had been concerns previously that the damage to Nord Stream 1 and 2 would effectively put them out of commission for good. After gas stops leaking from the affected pipes, saltwater will rush in, causing corrosion. This, coupled with the possible forming of ice plugs in the lines that would need to be cleared, could make repairs cost-prohibitive.

Who is responsible for the apparent attacks, as is how they might have been carried out, remains unclear. Experts and observers have noted that the unexpected increase in gas flowing out of the breach in the Nord Stream 2 pipeline can only come from one source, though the exact reason could still be innocuous.

In addition, the fact that one-half of the pipeline could be undamaged entirely would be to the benefit of the Russian government, which has continually offered to supply gas through it if the Germans and others defy American sanctions and other pressure. Much of Western Europe is currently in the throes of an energy crisis. While efforts have been ongoing for months now to decouple from Russian energy resources, the loss of gas through the Nord Stream 1 pipeline can only further exacerbate the situation. If European countries were to turn to the Nord Stream 2 pipeline it would, if nothing else, be a major propaganda victory for the Kremlin. It would threaten to drive a wedge between EU and NATO members over ongoing efforts to support Ukraine’s fight against invading Russian forces.

Questions have been raised about whether the apparent pipeline attacks might reflect a larger campaign targeting European energy supplies. Last week, reporters emerged about worrisome drone activity around Danish and Norwegian offshore oil and gas platforms. Norway’s armed forces have responded to those incidents with a very visible increase in presence – including aerial patrols by stealthy F-35A Joint Strike Fighters and the deployment of various warships – around the country’s energy infrastructure in the North Sea.

Whether any of the ongoing investigations, which may now be hampered in part by the apparent continuing flow of gas out of one of the breaches in Nord Stream 2, can conclusively determine who might have been responsible remains to be seen. Regardless, the ruptures have certainly become a new and serious flashpoint between Russia and the West beyond the immediate conflict in Ukraine.

The HSwMS Belos could help provide answers to at least some of the still-unanswered questions about the pipeline incidents.