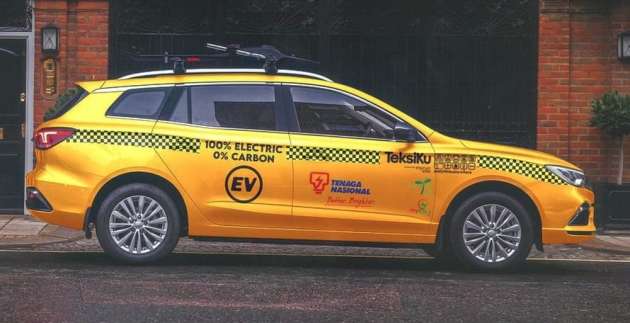 Further details have emerged about the Mysuri Biz Technologies programme to deploy 1,000 electric vehicles (EVs) as taxis in the country. As reported last month, the service – which will be offered by the company under the TeksiKu banner – will begin operating in November, and while a MG will be the first model to be deployed under the programme, it will be the MG5 instead of the MG ZS EV.

This was revealed by Mysuri Biz Technologies CEO Mohd Noor Ghazali, as reported by Harian Metro. “The MG5 EV will be the first model to be introduced, with the BYD e6 and the MG ZS EV SUV due in the next phase,” he said. With 700 units of the MG5 set to be brought in, the wagon-based EV – which is also being used by SMRT in Singapore – will form the bulk of the TeksiKu EV fleet.

He also outlined some additional details of the programme, which has been in the pipeline since 2020. Around 100 MG5 EV units will be deployed in Langkawi, where there will be used during the Langkawi International Maritime and Aerospace Exhibition 2023 (LIMA ’23) that runs in May next year. He said the objective is to promote the use of electric vehicles and to attract more EV users to the island.

While charging infrastructure support in the public domain will be provided by TNB, Mysuri will also implement a network of chargers for taxi drivers to recharge their vehicles. Besides a number of main charging centres, chargers are also due to be installed in key locations such as airports.

Mohd Noor said that around 80% of these charging stations will be 22 kWh AC units, while the rest will be 60 kWh DC fast chargers. Aside from the Klang Valley, charging points operated by Mysuri will also be installed in cities like Johor Bahru, Johor and Penang, and will be accessible to users through the MyCaj app.

The EVs, which will be made available to drivers under a lease-to-own scheme via the Koperasi Jurupandu TeksiKu cooperative. Individuals interested in the programme will have to pay RM20 to become a member of the coop and subscribe to a minimum share of RM250 and above.