Tesla Semi’s Enormous Battery Might Weigh 11,000 Pounds on Its Own 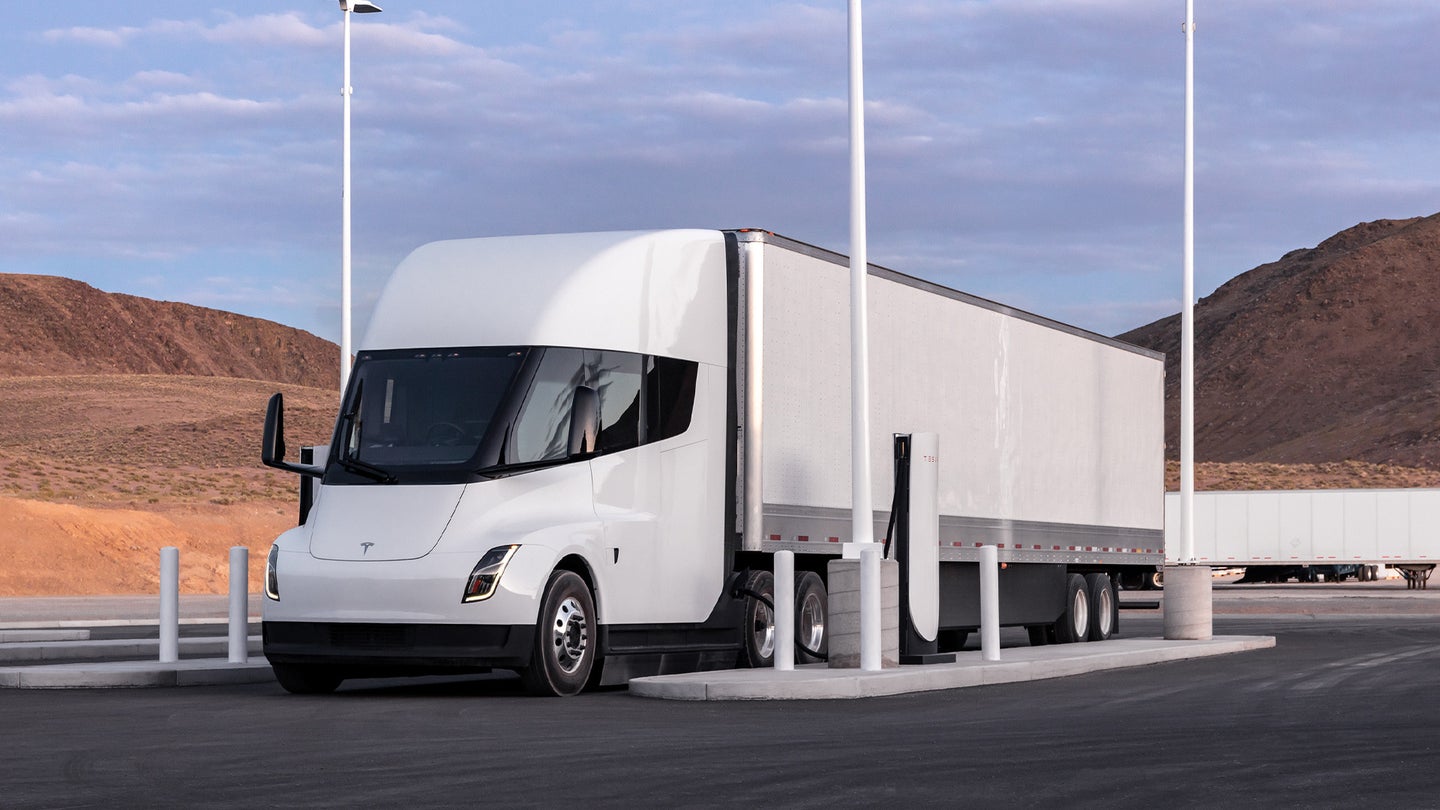 It’s official: the first electric Tesla Semi has been delivered to PepsiCo and Frito-Lay. Tesla held a delivery event Thursday in Sparks, Nevada, to commemorate the event, complete with a load of snacks carried by one of the Semis. Even though I wasn’t there in person, the show still gave me something to chew on.

During the event, Tesla CEO Elon Musk revealed that the Semi is rated for 500 miles of range with a fully loaded trailer, which meant that the battery pack inside the truck would have to be absolutely ginormous. How big, exactly, is unknown; however, Musk took to Twitter early Friday morning to reveal roughly how efficient the truck is, which helps me make estimations about capacity and weight.

Based on those efficiency numbers, a bit of napkin math shows just how large the battery pack might be. A rating of 1.7 kilowatt-hours per mile equates to a pack size of around 850 kWh, or around 8.5 times the size of a Tesla Model S Plaid’s battery.

Multiple sources claim the 100-kWh battery pack you’ll find in a Model S weighs around 1,300 pounds. While it’s unclear how much the Tesla Semi weighs without a trailer, the truck’s battery pack alone could weigh as much as 11,000 pounds—a figure that can quickly eat into a loaded Class 8 truck’s maximum gross weight of 80,000 pounds. For comparison, the GMC Hummer EV weighs 9,000 pounds, and an unladen semi-truck can weigh as much as 25,000 pounds, according to JD Power.

Now, it’s important to note that the total weight of the battery pack could vary depending on the type of cells used in production as well as the number of components in a battery pack. Still, a rough weight of 11,000 pounds for the pack alone shows just how heavy battery-powered vehicles can be.

Tesla believes it can further increase the efficiency of the Semi, according to Musk. At 1.6 kWh per mile, the Semi would be able to travel around 530 miles with a full load, and at a potential 1.5 kWh-per-mile rating, that would mean 566 miles on a full charge. It’s unclear if the efficiency optimizations would be delivered via an over-the-air update or through future hardware improvements.

PepsiCo’s deliveries mark the very first production Semis in the wild. The snack company pre-ordered 100 trucks five years ago when the Semi was first announced in 2017, which unofficially represents around 10 percent of the total number of reservations tracked by the public. Tesla says that it will also be using these Semis to haul freight in its own supply chain, meaning that it expects to produce a number of trucks for its own use in the coming months.

The post Tesla Semi’s Enormous Battery Might Weigh 11,000 Pounds on Its Own appeared first on The Drive.