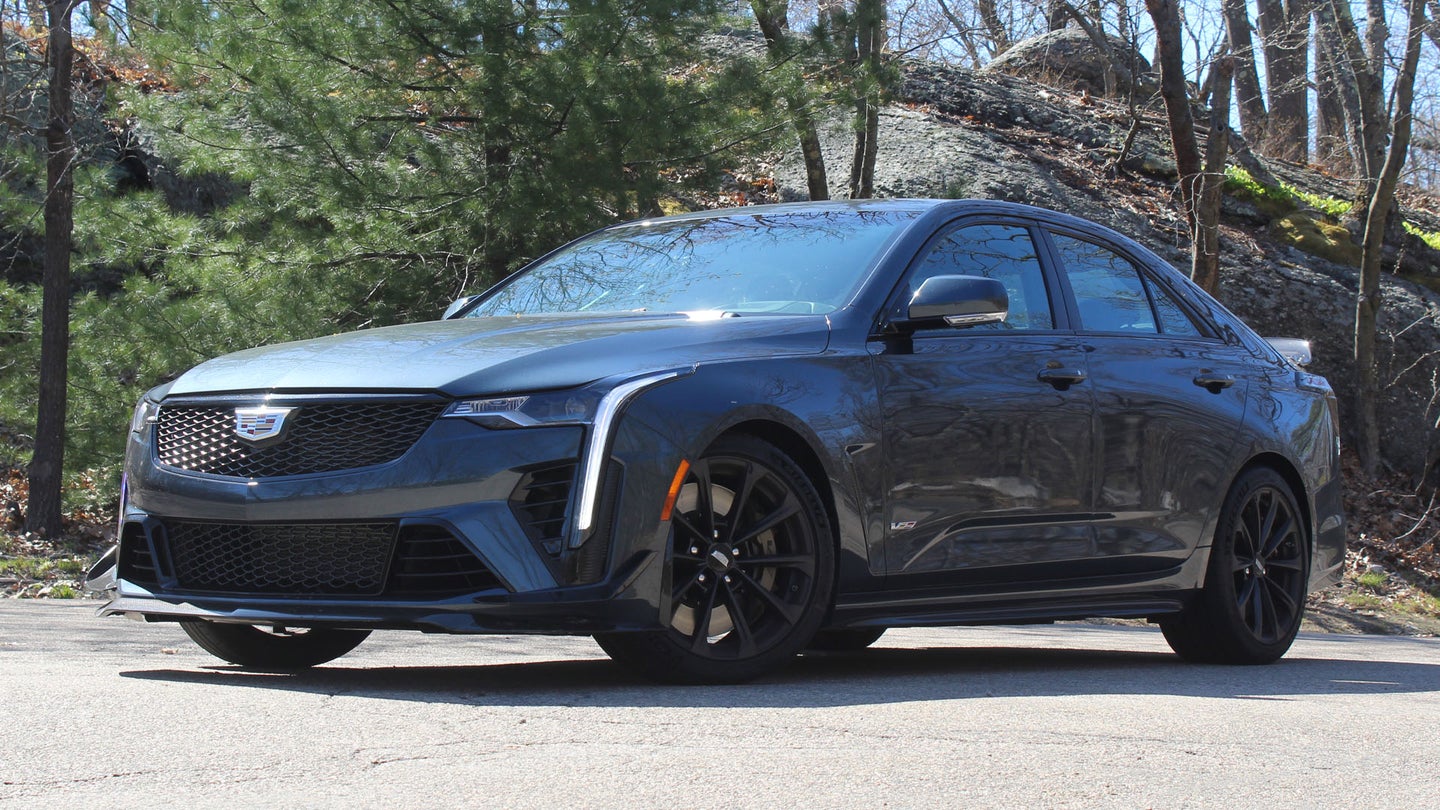 A lot of good sports cars take some getting used to. The BMW M2 CS, the new Nissan Z, and even my own C7 Corvette all took some adjustment before I started to really love them. Arguably BMW’s best driver’s car, Nissan’s shiny new sports car, and even my own personal dream car are all great in their own ways but aren’t without flaws that take time to get accustomed to. Keep that in mind. Now consider this: Within five minutes of driving the 2022 Cadillac CT4-V Blackwing, it was clear that this thing was an all-time great.

There is no better stick-shift sports sedan for sale today, save perhaps the V8-powered CT5-V Blackwing. On paper, you’d assume the CT4-V Blackwing’s prime BMW competitor would be the M3 or M4. But it’s a bit of an open secret that the M2 is generally regarded as the best-driving and most rewarding BMW M currently on offer. The CT4 doesn’t absolutely butcher it in terms of all-out performance, but that’s never something BMWs did to their rivals, either. All things considered, though, the Cadillac is just a better machine to drive. It has, finally, beaten the Bavarians at their own game.

The strange part about this is that Cadillac’s performance cars haven’t exactly made a quantum leap. They’re cheaper than the competition, sure, but it’s always been that way. They’re arguably better looking than anything from BMW, but that’s on BMW more than anyone else. [Ed. note: Debatable, but I’ll allow it. -CT] What Cadillac has done with the CT4-V Blackwing is basically make a better ATS-V at a time when there are only two automakers in the building putting out manual sports sedans—and one of those automakers isn’t quite what it used to be.

Caddy’s high-performance V offerings have only been getting better since their introduction in the early 2000s. BMW’s M cars have been gradually losing their luster for years. It’s only a matter of time before their trajectories cross and roles reverse. With the CT4-V Blackwing, it looks like it’s already happening.

The CT4-V Blackwing is the highest-performing version of Cadillac’s compact, entry-level sedan, making it more or less a successor to the ATS-V. It’s up to you to decide whether it looks as good as the old car, but vertical lighting elements front and rear make it obvious we’re dealing with a Cadillac. Really, the most important changes are found inside. The interior is more than acceptable for the car’s price, especially when you consider the available features. Just based on looks alone, everything inside is finally stuff that’s easy on the eyes and nice to the touch.

Making it all move is an engine that’s basically the same as that of the 464-horsepower ATS-V, but a fair amount of tuning has taken place to make sure it’s the best it can possibly be. The LF4 twin-turbo 3.6-liter V6 now makes 472 hp and sounds better than before. The CT4-V Blackwing is available with either a 10-speed automatic transmission or a six-speed manual. Rear-wheel drive is mandatory.

You know how I said I knew how great this thing was in the first five minutes? I can actually walk you through them. Starting it up and getting going, the clutch felt good, and not even just in the context of a new car. It picked up at a predictable point in the travel and was easy to modulate carefully. Then I reached for second gear and noticed the revs dropped right off—it didn’t hang up high in the rev range, as other new manual cars might do. Once I got into a few tighter turns, the electric steering was surprisingly very communicative.

So far, the clutch, gear change, and steering were all stellar. Then, I merged onto the highway. The engine sang up to its 6,500 rpm redline with ease. It sounded great, felt smooth, and reacted to downshifts with an automatic rev-match eagerly. The CT4-V Blackwing isn’t mind-blowingly fast, but its 472 hp is very usable. In fact, it feels closer to 350 hp in terms of usability rather than the 500 it’s actually approaching. In the past, this engine has been called-out for sounding and feeling a little unrefined, but that’s just not the case anymore. It revs very freely and doesn’t buzz up by the redline at all. With a tune, this car would be an absolute missile.

The chassis is also extremely buttoned down, which is something I could appreciate even on the Interstate. Some sports sedans have adjustable magnetic shocks—great—but the softest settings are still rock hard and the hardest settings are straight-up uncomfortable. The CT4’s adjustable suspension is not like this. In its soft setting, it’s extremely compliant and well-damped, absorbing imperfections and potholes with ease without rolling around. In the track setting, however, it’s appropriately very stiff. That is, after all, what the track setting is for.

Blackwing CT4 is utterly flat through the corners. Although you can’t feel them working, there’s definitely some magic going on with the MagneRide 4.0 shocks in an active sense. Imperfections mid-corner are ironed out and accounted for in ways that are very confidence-inducing. Same goes for the brakes, which are attached to a pedal that feels natural and delivers intuitive stopping power in relation to pedal input.

Wonderfully cohesive and capable, it was clear right off the bat that this is a feeling BMW has been chasing for a long time and one that the Blackwing delivers in spades.

The ride quality, engine sound, brake feel, steering, and more can also all be altered independently and assigned to the custom “V-Mode,” which can be enabled on a whim via a button on the steering wheel.

For the record, it’s soft suspension, second-notch-from-the-loudest exhaust, the most aggressive brake feel, and light steering for me.

The lows are few and far between in this thing, but, to make things even better, Cadillac has made it so that you can actually turn a lot of the annoyances off.  For example, track mode exhaust pops and bangs way too much, but this can be solved by simply setting a V-Mode with a quieter exhaust and track for everything else.

Inside, the eight-inch infotainment screen is slightly smaller than it should be, although to focus on that would be missing the point of this car. Rear headroom is also not great—I’m around six feet and didn’t have much space—but again, fairly insignificant in the bigger picture.

On the other hand, the interior is very well-appointed in terms of fit, finish, and features. Heated and cooled seats with lumbar massage are available and very pleasant. Everything you touch and see, with few exceptions, looks and feels great. The physical controls all make sense and, of course, driving inputs—throttle, steering, brakes, clutch, and especially the shifter—have been tuned to perfection.

But who wants a base model? Let’s add some options. If it were my money, I’d want a sunroof, the heated/cooled lumbar massaging seats, orange paint, and a head-up display. Ticking off all of the packages required to get these things and the total is still $69,890—still almost three grand less than an optionless M3. The outgoing M2 CS I drove, keep in mind, came in at $93,095 as-tested. Alternatively, the Lexus IS500 is also much cheaper at $58,500, and it has a V8. The Audi RS3 is also around the same cost, starting at $59,995.

Each of those competitors is worthy in its own respect. Want a V8 and Japanese refinement? The IS500 is a good choice. Likewise, the sound from the five-cylinder engine in the Audi RS3 is hard to beat. None of them besides the M3 and the Cadillac are offered with three pedals, though. For a lot of enthusiasts, that’s a dealbreaker, especially considering stick-shift sedans like this are very likely going away soon.

This is a performance car so the sustainability isn’t as relevant as it would be on other vehicles, but it’s worth mentioning. The EPA’s official fuel economy figures are pretty dead on. Expect 15 to 17 mpg around town. On the highway, it can be juiced for a little bit more than the EPA says, but not by much. I saw around 23 to 25 mpg pretty consistently. This is about where most other cars in its class land so it’s not especially good or bad. The CT4-V Blackwing does not have auto stop-start nor does it have any sort of “eco” driving mode.

At MSRP, the CT4-V Blackwing handily undercuts the M3. But with the way the market is right now? It’s a total toss-up. One dealer might sell you a bigger and overall superior CT5-V Blackwing for what another marks up a CT4 to. On the topic of CT5-V Blackwing: I’ve only gotten a chance to drive one briefly, but it’s the only other stick-shift sports sedan I’ve driven that’s considerably better than this one in many ways.

It was never guaranteed that Cadillac’s sports sedans would finally end up like this, but the CT4-V Blackwing approaches sports sedan perfection. Cadillac did it: it beat the Bavarians at their own game. The catch is it’s only sticking around for one generation and everybody—especially dealers—is all too aware of that. We finally have our cake, but eating it is complicated.

That’s not gonna stop me from maintaining that this is an all-time great, though. Prepare for resale values to never go down.

The post The 2022 Cadillac CT4-V Blackwing Finally Beats the Germans at Their Own Game appeared first on The Drive.