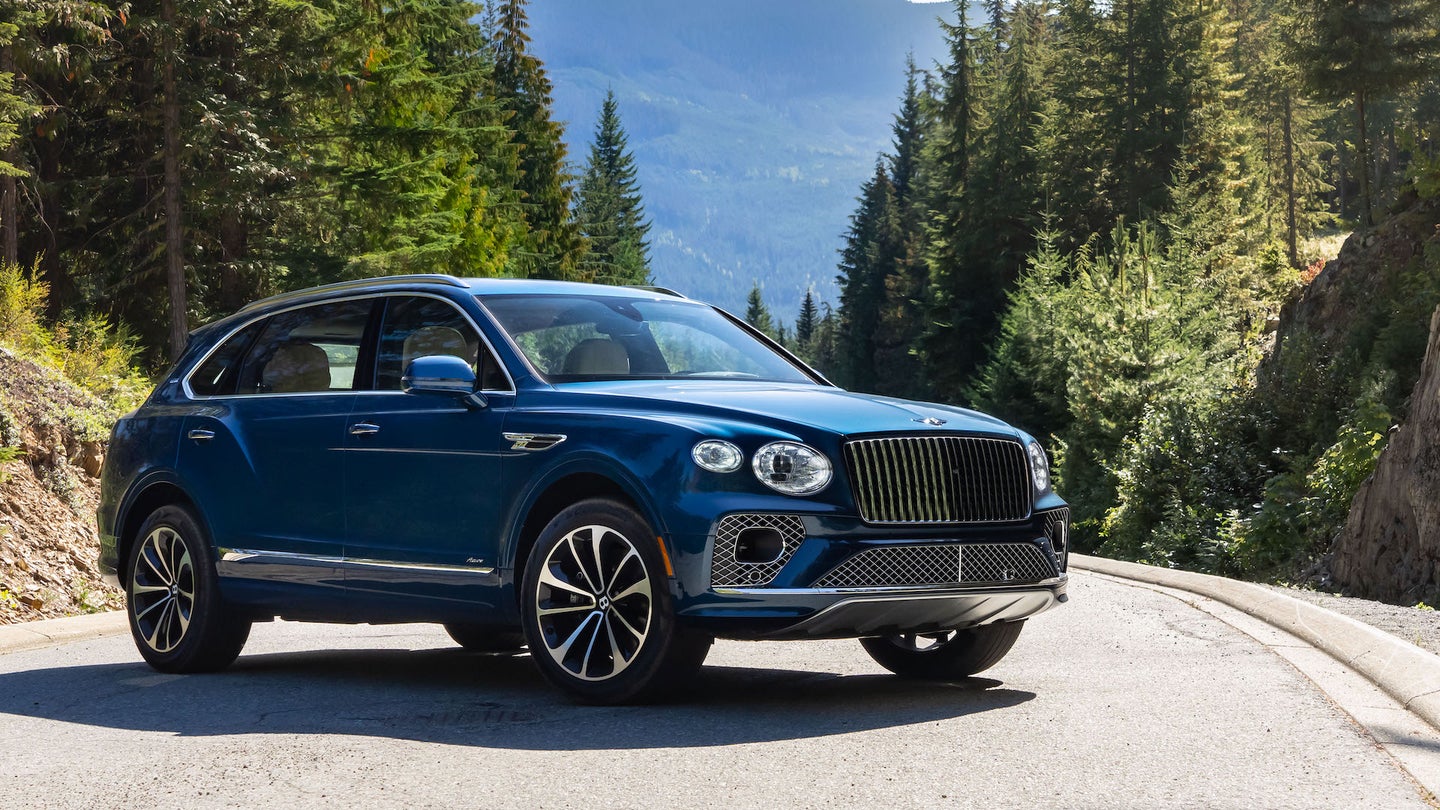 Stand around at the departures area at any big-city airport and take a look at what’s rolling up to drop off VIPs these days. Instead of Lincoln Town Cars and S-Class Mercs, it’s big, hulking SUVs like Chevy Suburbans and Cadillac Escalades—or, if you’ve done real well in life, perhaps a 2023 Bentley Bentayga Extended Wheelbase. And why not? Sporty driving dynamics certifiably do not matter here and SUVs are easier to get in and out of, ride comfier on account of there just being more distance between ass and road, and let their celeb/dignitary occupants smugly look down on the unwashed, normie masses. SUVs are the new executive limos, there’s little doubt about it.

So, when Bentley was faced with the task of indirectly replacing the Mulsanne by stretching either the Flying Spur sedan or the Bentayga SUV (but not both), the choice was simple. With all of the extra length happening in the rear row and featuring a new Airline Seat, the Bentayga EWB chauffeur-mobile is the Bentley to be driven in.

And what a car it is to be driven in.

As its name suggests, the big new enhancement here is about seven inches (or precisely 180 mm) of extra wheelbase and rear legroom. However, Bentley insists that the EWB isn’t just a simple stretch job. Physically longer than both its rivals in the Range Rover LWB and Rolls-Royce Cullinan, the longboi Bentayga apparently consists of 2,500 new parts, huge changes to the body-in-white, a repositioned sunroof, and a completely new underfloor. Its manufacturing facility needed new tooling, fixtures, and a modified build hall, and the whole ordeal apparently cost the company somewhere in the nine digits.

You wouldn’t necessarily gather this simply looking at it, though, because from the outside, the Bentayga EWB just looks like a Bentayga with an abnormally large rear door. It looked a bit odd to me at first, too, but after being in its presence for a while, it actually fits the vibe of this car quite well. Although, I still think it would be better proportioned if the B-pillar was moved back a bit. When I presented this idea to Bentley Exterior Design Manager Crispin Marshfield, he actually agreed with me, but explained that doing so would have added exorbitant development costs and made it harder for passengers to get in and out of the back. Fair enough.

The rest of it is classic Bentayga. Strong character lines over the rear wheels set itself apart from more pedestrian family haulers, as does the chrome, gated-community gate grille. And y’know how some BMW headlights say “BMW Laser” somewhere on the side? The ones on the Bentayga look as if they should be branded “Tiffany & Co.”

Inside, the opulence continues. Everything is covered in creamy leather, polished wood, or cold, chrome alloys. Knurled knobs click with a deliberateness that you just don’t find in regular cars, while the 10.9-inch touchscreen is elegantly integrated into the dash. Graphics and fonts are clear and, like, vaguely nautical. The in-dash clock looks very expensive and is flanked by air vents that open and close via cufflink-style rods that look and feel almost Victorian. As Harry Styes might say, one of my favorite things about this Bentley is that it, y’know, feels like a Bentley.

Standing next to one as it started up, the Bentayga comes to life with a refined, restrained, and ultimately-quite-nice-sounding snarl. That 4.0-liter twin-turbo V8 makes 542 horsepower, 568 lb-ft of torque, and lets the EWB hit 60 mph in 4.5 seconds—0.1 seconds slower than the lighter, regular-length ‘Tayga. Car tops out at 180 mph. Nobody is buying an extended-length Bentley to go drag racing, though, so when it comes to the much more crucial aspect of highway passing, the big executive hauler will overtake fools all day long with a valiantly smooth demeanor and a muted-but-mighty V8 voice.

Despite this fundamentally being the same engine found in the Porsche Cayenne Turbo GT I happened to have driven recently, it sounds very different. While that Cayenne sounds like the sort of car to turn up to dinner parties with a full-face helmet and energy-drink branded race suit, the Bentayga is like that same person but with a proper tux on.

This “kinda the same but also not at all” parallel with its Porsche GT platform-mate also applies to the way the Bentayga EWB handles. Piloting it around town, there’s an accessible genericness to the way it moves. “Yep, it feels like a softer, uber-fancy Cayenne,” I found myself thinking. It’s light-feeling and a bit lacking in character; less stately British barge and more cosplaying VW. Get it out onto more open roads, however, and the work that’s gone into Bentley-ifying this car’s MLB Evo platform becomes very apparent indeed. Extremely smooth and comfortable, all of the Bentayga’s inputs have a measured, albeit still easy, weight to them that makes it feel very much like a four-dollar-signs-on-Yelp luxury product.

It floats over the pavement in a deliberate and extremely solid way, soaking up bumps of all sizes. At the same time, electric active roll control means there’s little to no body lean when navigating fast highway curves. Surprisingly, the steering even chatters a bit at speed and isn’t quite as numb as you might expect. Brakes, meanwhile, are effortless and make it dead-easy to bring the Bentayga to a stop completely jolt-free. Even aggressive stomps on the accelerator are smoothed out enough to not disrupt occupants too badly.

Overall, it’s just a pleasurable, easy car to operate gracefully and shows the impressive adaptability of this platform and powertrain.

Partly thanks to the introduction of rear-wheel steering—a Bentley-first, believe it or not—the Bentayga EWB also drives way smaller than it is, with a certifiably tight 38.7-foot turning circle that Bentley claims is smaller than even the regular-wheelbase Bentayga’s.

Riding in the Bentley Bentayga EWB

Arguably, the entire reason the EWB exists, however, is for the benefit of rear passengers and, as a rear passenger, the Bentayga EWB is quite remarkable. Even before you get to marvel at the sheer space and cosseting toys, however, you’re greeted with yet another Bentley-first feature: power-closing doors. Two switches on the rear center console labeled “door close” let you do just that without reaching outside and pulling on said door. That shit’s for poor people.

As its premise suggests, the rear quarters of the Bentayga EWB are massive. For reference, I am about five-foot-seven (five-foot-eight on Tinder) and stretching my legs out as far as they could go while keeping my feet flat on the floor, there were several inches of legroom left to spare.

The so-called Airline Seat itself—a throne Bentley claims to be the most advanced car seat ever—is appropriately cozy. There’s a pillow on the headrest Mercedes-Maybach-style and absolutely everything is adjustable. Auto-sensing climate control takes into account contact temps as well as surface humidity to automatically adjust seat heating and ventilation to maintain optimal comfort, while postural adjustment subtly moves parts of the seat around to prevent numbness over long rides. Dual rear air ionizers keep the air fresh and meant passing by a forest fire on this first drive was barely perceptible to the nose.

That passenger-side rear seat can, of course, go into full recliner mode with the front passenger seat moved forward and the footrest deployed. Coupling all of this with the not-bad-at-all six-program massage function meant being in one of the most genuinely relaxing postures you can be in short of lying down in the comfort of your own bed.

It’s all controlled by a little touchscreen in the rear center console that can pop out for easy, handheld operation. This little screen lets you control media and radio, 22 ways of seat adjustment, climate, and can even provide a live peek at how fast your driver is going. The software here works quite well and was easy to navigate while the device itself is a nice item. Housing a reasonably high-res display, it feels heavy, tight, and high quality in the hands and even has that nice, textured chrome on the back that ties it in with the rest of the interior.

The comfortable ride and impressive sound insulation combine with the reclining seat and all of its functions to create a sublimely serene passenger experience that easily tops most actual first-class airline seats.

As complete, competent, and wonderfully luxurious as the Bentayga is, it ain’t perfect. No car is.

First off, the soft- and automatic-close rear doors can be finicky. Those auto-close motors mean you can’t slam the doors shut but if you don’t close them properly, the soft-close function doesn’t always work. This resulted in more than one occasion where either my fellow journalist drive partner or I tried to drive off but couldn’t because a door wasn’t closed properly. Not very cash money. And while the auto door close function is indeed quite novel, I don’t love the location Bentley has chosen to place the buttons. Instead of putting these somewhere on the center armrest, they’re on the center console, which requires bending forward quite a bit (especially if you’re sat in the full-lean recliner mode), a move that I’m not entirely convinced requires less total physical effort than, y’know, just reaching out and closing that rear door without mechanical assistance.

Secondly, the 20-speaker Naim audio was never going to sound bad, of course, but I’m not sure it’s anything to write home about, considering the arena this car plays in. Does it sound appreciably better than, say, the Volvo XC90’s top Bowers system? I don’t think it does.

What’s more, there was an annoying rattle under heavy bass. Unexpected and unbecoming for a car of this luxury caliber.

Door- and speaker-related qualms aside, the Bentayga EWB is a pretty marvelous car. Serene as hell to be driven in and solidly buttery to drive, the extended Bentayga is the Bentayga to get if you ferry rear passengers with any frequency and—now that the Mulsanne is gone—absolutely the Bentley to get if you plan on pairing it with a chauffeur.

Unless you have a garage that’s abnormally short, there’s little penalty going EWB over the regular-length Bentley SUV. Rear-wheel steering curbs (no pun intended) any maneuverability issues and, after being around it for a day, the stretched look actually makes the SWB Bentayga look stubby in comparison. As for the issue of money, Bentley is charging a $30,900 premium for the bigger rear quarters over a standard Bentayga, which, considering that car already costs at least $198,725, feels like chump change. The Bentayga EWB comes to a base MSRP of $229,625.

The ones tested, however, were Azure models, which bump the price up to $266,225. While Bentley’s “Speed” variants up the excitement and, uh, speed, Azure does the opposite. Developed in collaboration with neuroscientists who apparently studied fatigue—a research subject I myself also happen to know quite well—Azure aims to maximize smoothness and comfort. On the Bentayga, this means 22-way, heated and ventilated front seats, that six-program massage, adjustable side bolsters, a heated steering wheel, special headrests, 48-volt active anti-roll control, adaptive cruise control, a head-up display, Night Vision, unique wheels, unique seat quilting, mood lighting, and more driver aids than standard.

It’s often suggested that “money doesn’t buy happiness,” but it certainly buys comfort. The supremely comfy 2023 Bentley Bentayga EWB may be the closest thing Bentley has to something bus-sized but, after a jaunt in its sumptuous, massage-capable, climate-controlled Airline Seat, I’m not sure I’ll be able to go back to being in anything that actually identifies as a real bus ever again.

Got a tip or question for the author about the Bentayga EWB? You can reach him here: [email protected]

The post The 2023 Bentley Bentayga EWB Is a First-Class Seat Before You Even Get to the Airport appeared first on The Drive.