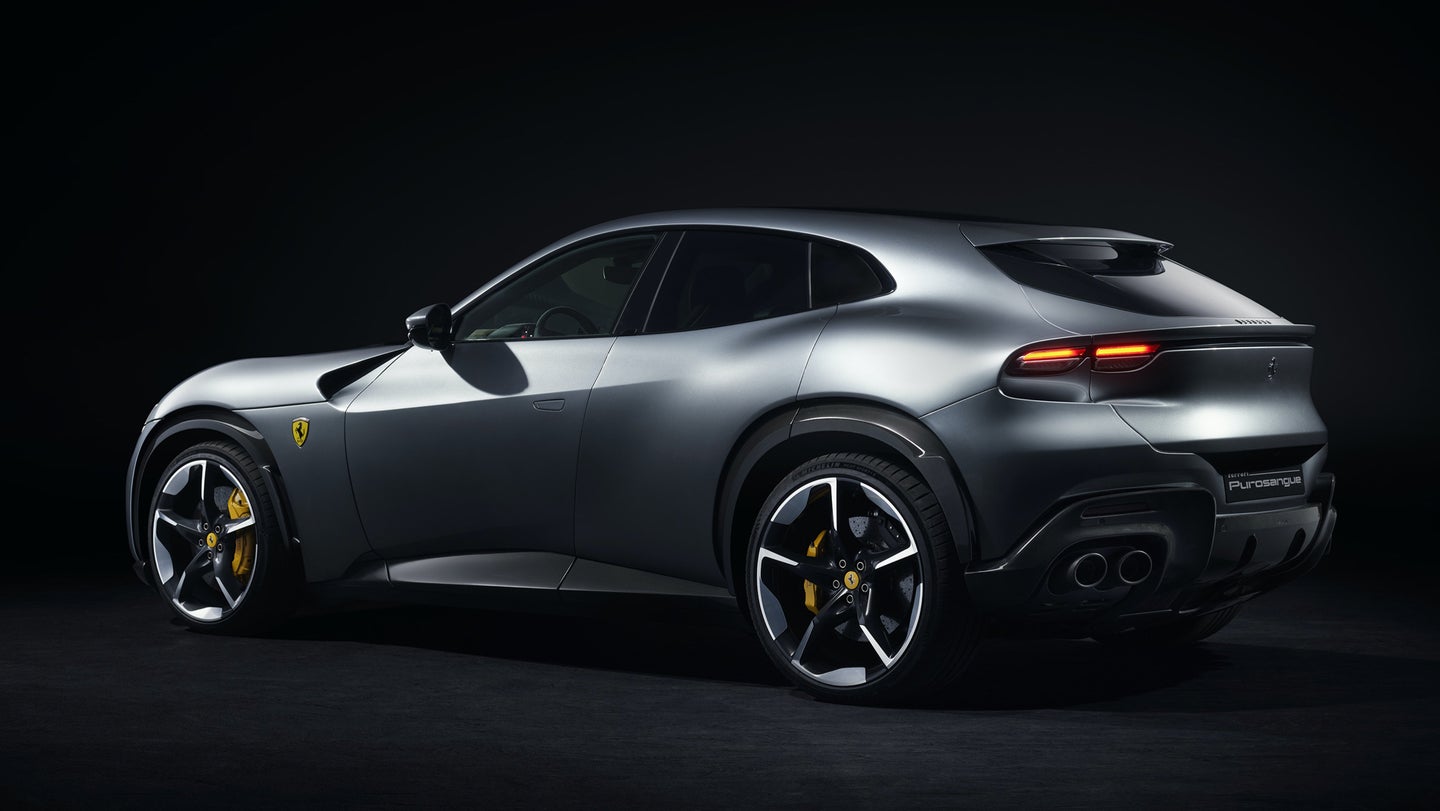 Ferrari finally did it, folks: it gave into making a high-performance luxury SUV. Err, sorry—FUV, which apparently stands for “Ferrari Utility Vehicle.” It’s the 2023 Ferrari Purosangue, and it’s got a glorious-sounding, 715-horsepower, naturally aspirated V12 and rear-hinged rear doors.

We’ve seen plenty of teasers already and heard the V12 engine note, but now we’re seeing the whole thing. This isn’t a hardcore off-roader, but rather an enlarged Ferrari for the road, complete with a sleek fastback roofline and a big rear hatch. It’s Ferrari’s first four-door four-seater, built to be comfortable, luxurious, and fast—more as an extension of Ferrari’s long history of great 2+2 coupes than anything.

Let’s talk about the Purosangue’s party piece first: that V12. Ferrari is almost overcompensating in its quest to make its first SUV a “real Ferrari,” installing a 6.5-liter V12 under the Purosangue’s long hood that’s good for 715 hp and 528 pound-feet of torque. According to Ferrari, 80 percent of that torque is available at just 2,100 rpm, which should make it a blast to drive. Ferrari claims a zero to 62 mph time of just 3.3 seconds, a zero to 124 mph time of 10.6 seconds, and a maximum speed of 192.6 mph.

The V12 itself, codenamed F140IA, boasts a 65-degree angle between the V, high-pressure direct injection, a dry sump, equal-length exhaust manifolds, cylinder heads derived from those of the 812 Competizione, and an 8,250-rpm redline. Ferrari says its engineers even dived into its F1 knowledge bank to create a system that recognizes the octane rating of the fuel in the tank and adjusts the timing to suit it. All in all, the F140IA engine is enough to make the Purosangue the most powerful four-seater Ferrari has ever made.

The Purosangue’s hood is long for a reason—that V12 has a front-mid-engine placement, and its gearbox is a rear-mounted eight-speed oil-bath dual-clutch transaxle, enabling the Purosangue to have a 49:51 weight distribution. An electronic torque-vectoring differential that Ferrari calls a “Power Transfer Unit” sits in front of the V12 to enable four-wheel drive.

The bodywork isn’t quite as beautiful as those classic 2+2s Ferrari tried lumping the Purosangue in with, but it’s quite functional. Ferrari spent a lot of time developing the aerodynamics of the bodywork, rear diffuser, and underbody to allow the Purosangue to cut through the air as efficiently as possible. The front bumper and wheel arch trim actually create an air curtain that aerodynamically “seals” the front wheels and prevents turbulent airflows from being generated there. There’s also a suspended rear spoiler atop the hatch to further optimize the way the Purosangue cuts through the air. The spoiler has another purpose, too: cleaning the rear window. The lower surface of the wing is directed at the rear window in order to keep it clean without the need for a rear window wiper.

One of the Purosangue’s coolest features is its electric rear-hinged rear doors—much like those found on Rolls-Royces—which Ferrari calls “welcome doors.” These were designed to be more compact than standard front-hinged doors while still allowing a decent amount of room for passengers to get in and out. All four seats are independently adjustable, heated, and recline-able. As you might expect, the Purosangue has the largest rear hatch space ever on a Ferrari, but in case it’s not enough, the rear row of seats folds down, too. The hood is also hinged in the front as a callback to some of Ferrari’s iconic models.

The Purosangue’s chassis was designed to be exceptionally rigid, making use of high-strength aluminum alloys in its lower structure and a spaceframe design. Ferrari made extensive use of thin-walled, hollow castings that kept structural rigidity high but weight low. High-strength steel was used for the areas that needed the most reinforcement, such as those components that are most important for crash-protection reasons.

Ferrari developed a new active suspension system for the Purosangue to reduce the effects of body roll and optimize handling over bumps to make the big SUV feel more like a sports car. It employs Multimatic’s True Active Spool Valve tech, which uses both 48-volt electric motor actuators as well as spool-valve hydraulic dampers in one unit to more precisely control each wheel’s movement. The Purosangue is also the first Ferrari ever to get hill descent control—a fairly standard SUV feature that allows the vehicle to maintain one speed as it descends a steep grade.

Making an SUV that doesn’t feel like an SUV was clearly a big deal, as Ferrari took extra care to keep the Purosangue’s center of gravity as low as possible. There’s a carbon fiber roof standard, although a full-length electrochromic glass roof is available as an option. The driving position is also closer to the floor than in most SUVs in an attempt to make it seem more like a car, and the dashboard itself was inspired by the SF90 Stradale. Ferrari says it shaved 15 mm from the height of the transmission alone by using a more compact clutch assembly and a dry-sump system.

The Purosangue also benefits from a greatest hits list from other modern Ferraris: independent four-wheel steering and the latest versions of its vehicle dynamic control systems. There’s a 10.2-inch display in the center of the dashboard for the car’s infotainment system, which has the same interface carried over from other current Ferraris.

New for the Purosangue is a standard Burmester 3D High-End Surround Sound system, an air quality filter that keeps out particles of up to PM 2.5 out of the cabin, plus the option to get a high-strength fabric used in military uniforms in place of the usual carped as a flooring material. Apple CarPlay and Android Auto also both come standard for the first time on a Ferrari—better late than never on that one.

So, regardless of whether you think the Purosangue is pure heresy or not, it sounds like it should be a lot of fun to drive. What do you think?

The post The 2023 Ferrari Purosangue V12 SUV Is Here To Make Money, Break Purist Brains appeared first on The Drive.