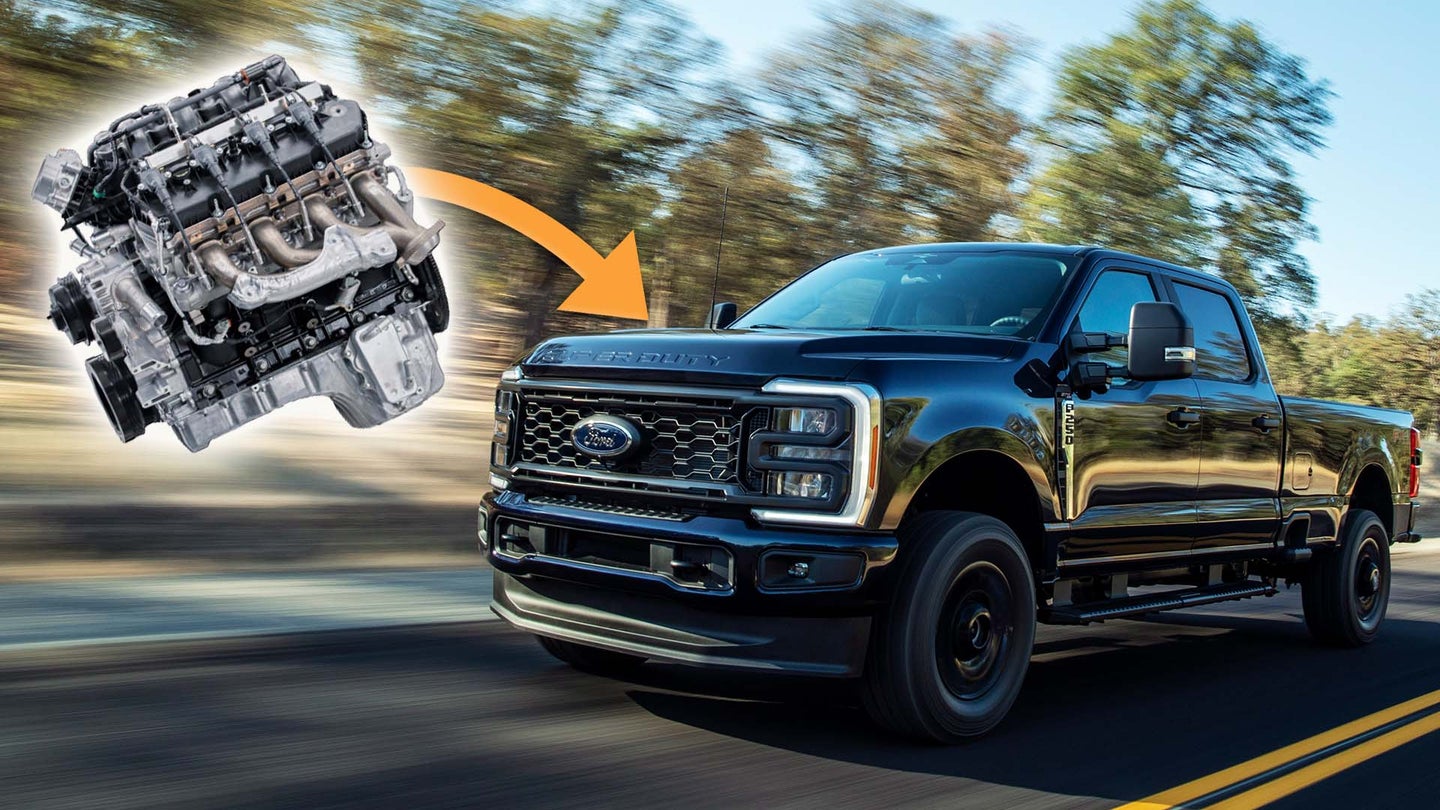 Sometimes, rumors turn out to be true: the 2023 Ford Super Duty will be available with a new 6.8-liter gasoline V8. It’s slated to replace the aging 6.2-liter that served as the outgoing model’s base engine for years, and as expected, it’s more or less a smaller-displacement version of the 7.3-liter Godzilla that’s become such a fan favorite. We don’t know everything about the new power plant just yet, but the Super Duty’s spec sheet reveals a few key details.

The 6.8-liter is still a basic cast-iron pushrod engine with a cam-in-block design, just like the 7.3-liter. Similarly, it sticks with aluminum heads and two valves per cylinder. It’s got an identical bore of 4.22 inches, but stroke is reduced from 3.98 to 3.68 inches, accounting for the lower displacement. Compression gets a slight bump to 10.8:1, compared to 10.5:1 in the larger lump. It’s a minor change, though, and the new engine is still designed to run on 87 octane fuel.

Ford hasn’t released any power outputs for the new Super Duty. Speculation suggests that the extra displacement of the new engine would give it a healthy power bump over the 6.2-liter, which makes 385 horsepower and 430 pound-feet of torque. The Godzilla 7.3-liter V8 makes 430 hp and 475 lb-ft of torque in the 2022 Super Duty, so it’s likely the new 6.8-liter will fall somewhere in the middle.

Pushrod engines are typically seen as old hat and incapable of the efficiency and performance of more modern designs. However, U.S. automakers have continued to push the limits of the older valvetrain tech decade after decade. Plus, pushrod units are often smaller and lighter compared to overhead-cam engines. This is part of what makes the LS such a popular swap, after all.

The change may mark the end of the road for the 6.2-liter Boss V8. The Super Duty was its last application still in production. It first debuted in the Ford F-150, all the way back in 2010, and it also popped up into Ford’s E-Series van line over the years.

Meanwhile, the Godzilla 7.3-liter seems to be a darling at Ford of late. It’s been popping up everywhere, including Mustangs and school buses. There’s even been talk of a mightier Megazilla crate engine on the way, which just sounds righteous.

Given this pedigree, it won’t be surprising if the new 6.8-liter quickly wins itself some fans. All it needs to do is offer a little more power and solid reliability, and it should be more than capable for the job.

The post The 2023 Ford Super Duty’s New 6.8L V8 Is a Destroked Godzilla appeared first on The Drive.