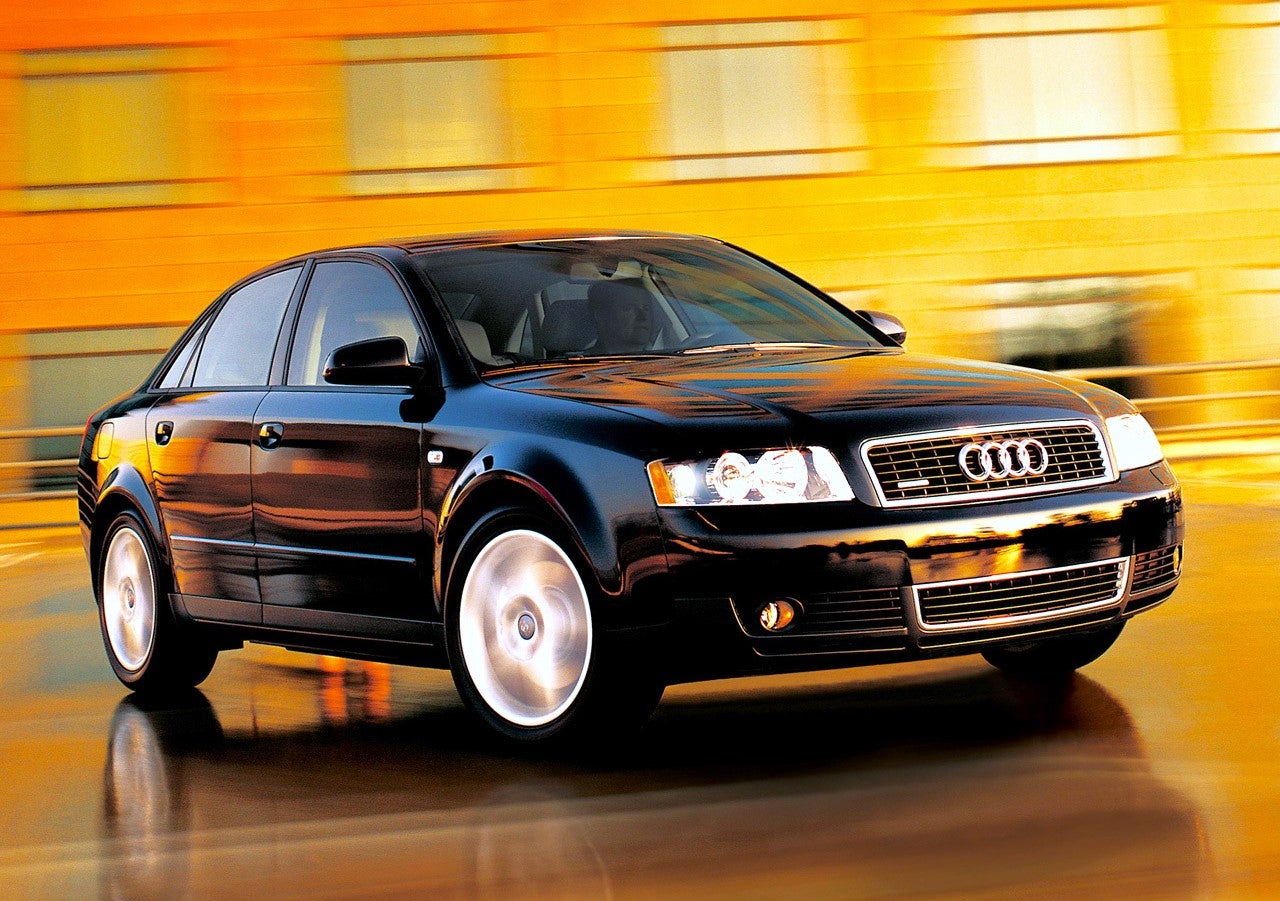 The early 2000s were one of the most significant eras ever for automotive technology, especially within Audi‘s headquarters in Ingolstadt, Germany. The Volkswagen Auto Group brand was fresh off the massive success of the B5-generation A4 and S4 and had just thrown a dual-clutch gearbox in its Audi TT. With the B5’s momentum, Audi moved toward a new company-wide design language that ushered in the B6-generation A4 and S4 for the 2002 model year.

The B6 made only a brief three-and-a-half-year appearance in the US market before the B7 arrived, but it was still a neat compact sedan that could be optioned with fun engines and all-wheel-drive. It was also packed full of enthusiast potential that was proven in motorsports around the world, and many aftermarket tuning companies still support the car to this day. Here’s why picking up a decent example on the used market, either as a fun daily or weekend project, could be your ticket to inexpensive-all-wheel-drive fun.

When new, the B6 Audi A4 featured an athletic-looking design compared to the previous B5. Like its larger sibling the A6, it possessed more rounded-off edges, kind of like if one were to hook a tire pump up to the B5’s body and inflated it a few PSI. This is most noticeable in its rear end, particularly looking at the taillights and rounded trunk lid. With its wider stance, pronounced arches, and clean lines, it’s a design that’s aged well and looks svelte compared to modern compact sedans (though, what cars of the era don’t?). A set of 17- or 18-inch wheels, such as 18-inch Audi Avus wheels from its V8-powered sibling the S4, really sets it off, and a light suspension drop goes a long way. But more on its aftermarket potential later.

For the U.S. market, these svelte sedans, wagons, and convertibles have two engine options: a turbocharged 1.8-liter four-cylinder (known among enthusiasts as the 1.8T) and naturally aspirated 3.0-liter V6. Both are regarded as fun engines, but I’d opt for the 1.8T, as there’s a lot more available in the aftermarket for boosting its power. The V6 made 220 horsepower and 221 lb-ft or torque, whereas the 1.8 put down 170 and 177.

For sending that power to the ground, front-wheel-drive variants have a CVT automatic transmission, while Quattro all-wheel-drive-equipped models have either a five-speed manual or five-speed conventional automatic. The quickest combination off the showroom floor was the V6 with Quattro and a manual gearbox, which clocked in a zero-to-60-mph run of 6.8 seconds via Car and Driver‘s stopwatch when new. Not bad for weighing in at 3,200 pounds. By comparison, the 1.8T Quattro variant hit the mark in 8.1 seconds, again per Car and Driver‘s measurement.

If I were to come up with my own description that encapsulates European car ownership, I’d say, “German cars have annoying issues and demand constant attention.” I know, it’s not the most poetic line, but in typical German fashion, it’s plenty frank.

The B6 has its share of issues, including ignition coil failure, coolant and oil leaks, and timing belt failures, with the latter being especially concerning. Both engines are interference engines, which means a snapped belt can lead to catastrophic damage like broken pistons and bent valves (20 of them in the 1.8T, 30 in the 3.0), or worse. Though, PCV system failures, oil sludge buildup, and a host of electrical gremlins aren’t outside the realm of possibility, either, and various enthusiast forums go over all of them in great detail.

The B6 requires close attention because of the factory maintenance intervals that these and other older Audis possess. If you keep up with them, and keep an eye on the car’s overall health, the A4 will live a long fulfilling life. Especially if you shorten them a tad, such as changing the full synthetic oil every 5,000 miles instead of 10,000.

Deferred maintenance will quickly dissolve any hope of rewarding ownership, especially for cars that haven’t been in production since 2005 and might be rolling around on their original bushings, tie rods, suspension components, and drivetrain fluids. No matter the car that’s at the top of your list, getting as much service history as possible, as well as a thorough test drive and inspection all go a long way.

When new, reviewers dug that the B6 A4 had great interior ergonomics, was made of quality materials, and was put together with premium fit and finish. Because of this, it was regarded as a solid entry point into European luxury car ownership. Although the A4’s interior might look a tad dated by today’s standards, the simplicity of it all and lack of massive screens and/or digital instrument clusters is a breath of fresh air.

To get the best all-around experience out of the B6 A4, I’d opt for a 1.8T model with a manual transmission and all-wheel drive. The turbo-four was a little underpowered from the factory—7.4 seconds to 60 in a luxury compact sedan wasn’t ideal. But the beauty of Audi ownership lies in its potential, especially for boosting the brand’s turbocharged powerplants. Fifty horsepower is no major feat, and there are plenty of sources for buying go-fast bits from ECS Tuning, Deutsche Auto Parts, 034 Motorsport, APR, Modded Euros, FCP Euro, and more. It’s not uncommon to build the 1.8T into something that’ll easily put down 300-plus horsepower to all four wheels.

Sure, one could hold out and look for the A4’s V8-powered B6 S4 sibling with its 344 horsepower and 302 lb-ft of torque, but to me, there’s something special about a high-output four-cylinder. Turbos are fun, there’s less weight over and in front of the front axle to help improve handling, and easy cruising out of boost could return some decent MPGs. Then, there’s maintenance—doing timing chain guides and tensioners on the 4.2-liter V8 sounds like a nightmare (it’s on the back of the engine), as does basically every other under-hood task. Though, I’m still infatuated by the S4. Look forward to a future, separate blog on its very own highs and lows.

Boosting power isn’t the only way to go with the 1.8T-equipped A4. The companies mentioned above offer suspension, wheel, tire, and drivetrain mods to turn any healthy A4 into a well-handling beast that’ll make the most of all that turbocharged torque and all-wheel drive traction. I’ve always held the opinion that the B6 could be both a fun, performance-boosted daily or a stripped-down, loud, angry track beast because it’s so universally compelling.

To get the daydreams flowing, there are a bunch of solid channels to find a little inspiration, too, like old Eurotuner Magazine build rundowns, perusing Instagram, and seeing what folks are up to in Facebook groups.

Race cars engines, chassis, and almost everything else are immensely different from their street-going counterparts, but that doesn’t lessen their appeal or take away from one’s pride in the chassis. It’s sincerely rad that, despite not lasting very long, the B6 raced in professional motorsports and saw some solid success, including Audi Sport Team Abt Sportsline winning the DTM (Deutsche Tourenwagen Masters) championship in 2004.

The B6 wasn’t just raced in DTM, either, as it found its way into America’s top touring car series of the era, Speed World Challenge (later known as Pirelli World Challenge, now as SRO World Challenge). In addition to the B5 and B7, prominent North American Audi tuner STaSIS (RIP) campaigned the B6 to some light success in the Touring Car class. Though, they saw far more success a few years later with the B7.

If you’re in the market for four doors, turbocharged or naturally aspirated power, a manual gear change, and Quattro all-wheel drive, and a classic shape without any annoying modern technological annoyances, the B6 A4 is worth keeping an eye out for.

It’s frankly surprising how much of an aftermarket these things still have, and for those inclined to turn their own wrenches, they might not be too terrible to work on, either. Especially when it’s the 1.8T under the hood. Though, more drivetrain components means more stuff to break and need replacing.

While beat examples are a bit too common on Craigslist and Facebook Marketplace, there are also some clean, taken-care-of ones out there that seem to fetch between $5,000 and $8,000 depending on mileage and options. Considering the B6 Audi A4 seems to be a bit rare amongst tuning communities nowadays, it could also be a solid option for those looking for something that’s a tad different, yet still relatively easy to find parts for.

More Used Options Worth a Look

The post The B6 Audi A4 Is Now a Sub-$10K Sports Sedan appeared first on The Drive.