The Drive’s Best Car of 2022 Is the Ford Maverick 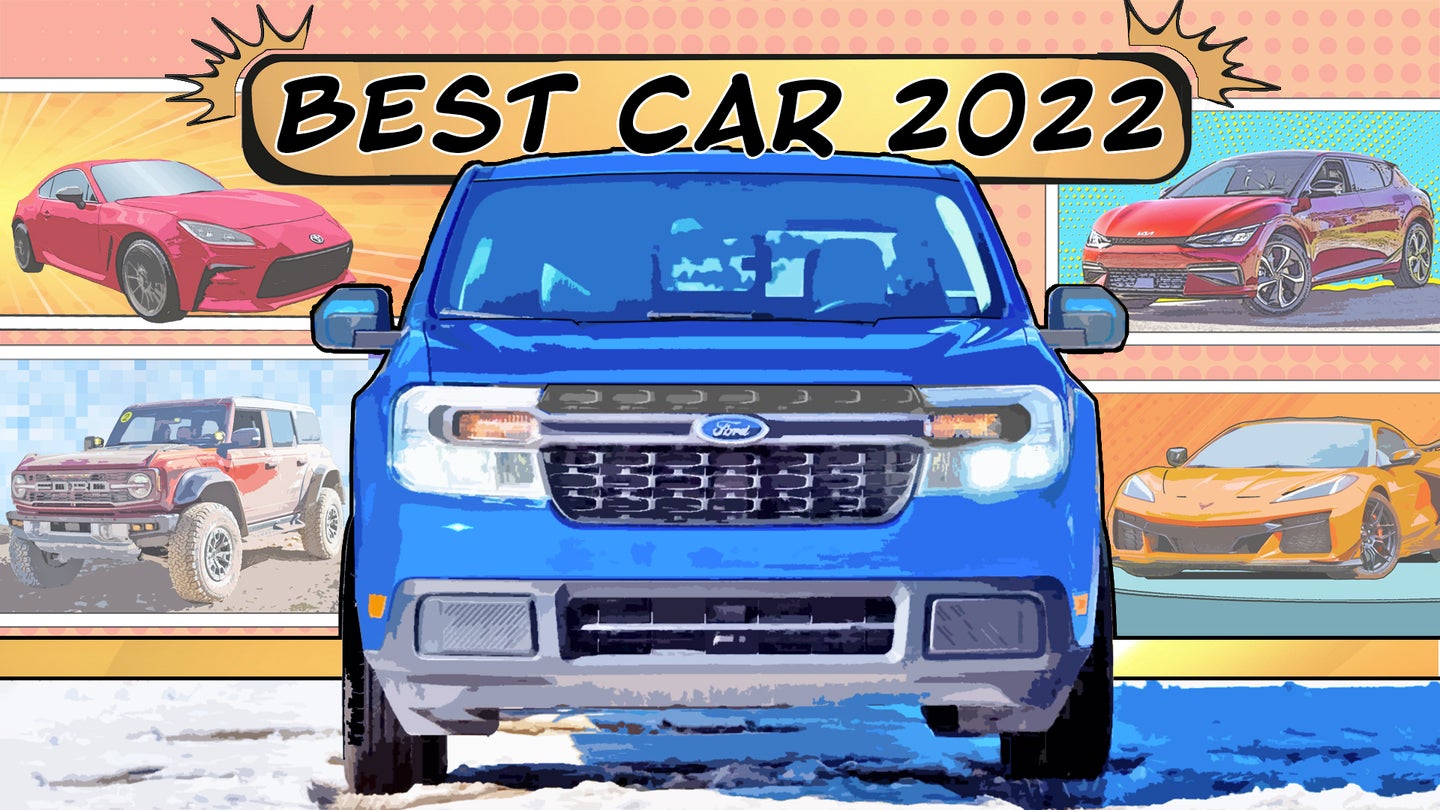 This is it. Almost a week of handing out awards has led to this: The Drive‘s Best Car of 2022. It’s been a stellar year filled with good cars, but only one can take home our biggest trophy.

Taking a look at what The Drive team collectively elected as this year’s crème de la crème, the path to snagging an award from us seems to be one of value. Build a properly amazing, flat-plane-crank, mid-engined supercar and command way less money than Maranello does. Build a swoopy electric crossover and dare to charge less than six figures for it.

Build a compact truck that starts at less than a Honda Civic. That sort of thing.

In these cash-strapped, high-inflation times, the value of a dollar is more important than ever. And while other publications may be happy with simply inundating Porsche with a bunch of awards every year for its admittedly stellar but financially crippling machinery, winning an award from The Drive—something we’re tentatively christening as a “Golden Slash” per Editor-in-Chief Kyle Cheromcha—takes a bit more guile.

To recap, the list of Best Car candidates below consists of the winners of the other five categories: Best Performance Car, Best EV, Best SUV, Best Car Under $40,000, and Best Truck. Winners were chosen from a staff-wide vote, as was the vehicle that ultimately won Best Car.

Here’s how it all shook out.

Despite it putting up a decent fight in terms of staff votes, no, the enthusiast’s-favorite Chevy Corvette Z06 did not take the title of The Drive‘s Best Car of 2022. It did, however, win Best Performance Car, and deservedly so. Rocking a mid-mounted, flat-plane-crank V8, and, according to Staff Writer Peter Holderith, capable of “unbelievable performance at an unbelievable price,” the track-focused C8 Corvette approaches fast-car nirvana.

“This is the Corvette’s defining moment,” wrote Holderith. “It hasn’t been compared head-to-head with anything yet on a track, but after driving it, it’s extremely safe to repeat my earlier statement: This is the real deal. After years as the butt of jokes, the Burger Car, it has completed its arc. This isn’t a ‘supercar killer,’ it’s a full-blown supercar. Its competition can’t touch it simply because of its price, and in terms of quality, there is no asterisk anymore.

“All of this is happening as the high-performance world changes to the way of hybridization and turbocharging. The Z06 rejects this reality. We don’t build those kinds of cars in Kentucky. Those vehicles may be technologically more advanced and definitely more efficient, but we all know they’re just not better. Not only is this an amazing Corvette, but it’s a rallying cry for the sorts of cars enthusiasts know, love, and sometime soon, will miss sorely.

I wish it could stay forever.”

In a marketplace mostly made up of six-figure, ultra-fast toys, building an attractive and practical EV with usable range and a price tag that won’t water many eyes remains an accomplishment. And that’s why the $42K-to-start Kia EV6 took the title of Best EV. Even discounting price, it’s a very solid car, with Staff Writer James Gilboy praising its “distinct styling, superb driving dynamics, and nicely competitive max range of 310 miles.

“[The Kia EV6] is easy to recommend on the basis of still being everything you want from a technologically advanced new car,” wrote Gilboy. “It looks spectacular, handles great, has competitive range, trustworthy ADAS, and in case you’re hesitant about being an early adopter, an exceptional warranty. It’s hard to ask for much more from a new car—lord knows many EV buyers don’t get nearly as much for their money.”

Coincidentally, the Kia EV6 also happened to be the star of The Drive‘s DC Down Under series which saw Gilboy and Night Editor Lewin Day cross the Australian Outback on nothing but electricity. And snacks.

Despite all this, the EV6 still did not garner enough votes to cinch our Best Car crown.

And neither did the Ford Bronco Raptor, the Blue Oval’s new off-road beast and The Drive‘s Best SUV of 2022. Rocking a 418-hp twin-turbo V6, more than 13 inches of ground clearance, the ready-for-anything Braptor, according to Truck Editor Caleb Jacobs, “drives as crazy as it looks.

“This Bronco manages to feel even more outlandish than its F-150 Raptor stablemate,” wrote Jacobs. “Being a Raptor, at least some of this truck’s hardware is devoted to leaping off of stuff, and it’s a sight to see the Bronco Raptor at full droop when launching off a jump.

“The truck is just as impressive at low speeds when climbing up obstacles and descending back down from them. Thanks to its 13.1 inches of ground clearance, I rarely felt the truck bottom out while traversing over big ol’ boulders; even at the dedicated rock crawl course, there wasn’t an excruciating amount of banging and clanging. That’s saying something, too, considering there wasn’t even a visible path for 4x4s to travel on in some places. Thank God for spotters.

“So long as I kept my eyes on them, I didn’t have an issue navigating through whatever the heck was ahead.”

Crawling over pathless rock and jumping off stuff. What else is an SUV for?

Branding ourselves as very much a car site run by car people for car people, the Toyota GR86 and Subaru BRZ twins were voted as the Best Car Under $40,000. Currently starting at $30,495 for the Toyota and $29,615 for the Subaru, the Toyobaru twins have spent the last decade being the go-to choice for those looking for a lightweight, low-slung, manual, rear-drive sports car that won’t break the bank. Yes, we are very aware that the Mazda MX-5 also exists but that car isn’t as practical—and it’s been a minute since it’s been significantly updated. In contrast, a new, more powerful generation of BRZ and 86 (now known as the GR86, no space) came on sale late last year and spent much of 2022 waggling their tails around the backroads of this country and worming their way into our hearts.

“The new BRZ is an admirably fun car to drive and a marked improvement over the original in pretty much every way that matters,” I wrote when I drove the Subaru. “Purely as a driving machine, however, Subaru’s rear-drive sports car is supremely well-balanced. Its approachable nature means it’s still a great starting point for anyone looking for their first serious sports car. The increased power means genuine thrill and rewards for seasoned drivers as well. As far as sequels go, the 2022 Subaru BRZ is one of the good ones.”

Despite all that, it did not end up winning Best Car either because…

This is America and as cool as affordable sports cars, off-road SUVs, quirky Korean EVs, and the greatest ‘Vette ever made are, what we really love are trucks. Even better if they’re affordable. Enter the Ford Maverick, The Drive‘s Best Car of 2022. Starting at just $21,490 (!), Staff Writer James Gilboy declared it as the “return of the great American economy car.” Truck Editor Caleb Jacobs called the hybrid model “an exceptionally usable truck that delivers on its promise of practicality and fuel economy.”

The Maverick isn’t really intended to compete with the Rams, Silverados, or Tundras of the world, but rather it’s more of a pickup-bed-equipped alternative to stuff like Civics and Corollas—all while undercutting the former, believe it or not, when it comes to base price. The frugal Ford handles well, eats up highway miles, is decently roomy up front (comfortably accommodating six-foot-five Jacobs), can tow up to 4,000 pounds, and has a 54-inch bed that’s longer than that of the heavier and slightly bigger overall Hyundai Santa Cruz. Plus, its interior is full of 3D-printed accessory possibilities, as we found out with our Great Ford Maverick 3D Print-Off competition.

(To me, the Maverick also scores bonus points for having a great freakin’ name. Ford Maverick. It’s hard to say that and not immediately think about Top Gun.)

At MSRP, the Ford Maverick is one of those things that’s getting rarer and rarer by the day: a genuine deal. It’s remarkable what Ford has accomplished for so little money and, for that, the Mav earns The Drive‘s first-ever Best Car Award.

The post The Drive’s Best Car of 2022 Is the Ford Maverick appeared first on The Drive.