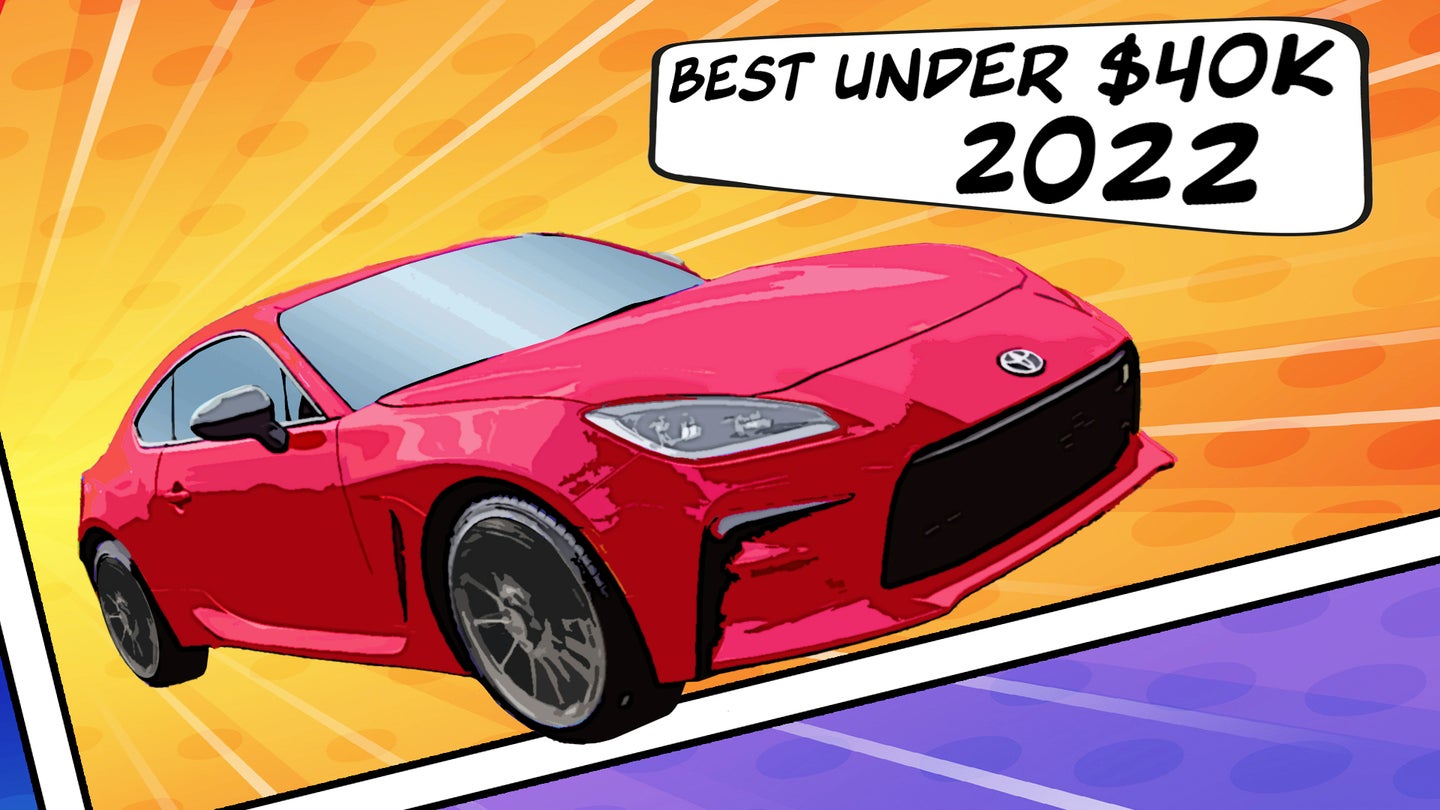 Poster cars are mythical beasts, complete with big wings, big wheels, and big performance, which more often than not translate into big price tags. While everyone loves to drool over a red Ferrari or an orange Lamborghini, the truth is those cars live in a world that few of us will ever belong to. But not all hope is lost, however, because there’s plenty to be happy about in the mortal realm—or as we at The Drive like to call it: the Under $40K category.

It’s 2022 and cars under $40,000 can be had with standard and optional equipment that would’ve made a Mercedes-Benz S-Class owner jealous just a few years ago. The same applies to drivetrains and performance specifications. From fuel-sipping hybrid engines to autocross-slaying suspensions, there is something for anyone looking to buy a new car without setting their wallets on fire.

Nominees were chosen based on review scores, but because the under-$40K segment is quite diverse, we decided to devote a slot to the best example of each “type” of vehicle under $40,000. There’s a crossover, sedan, coupe, truck, and an electrified contender. Only one out of those five could take home the crown, though, and that was decided by a vote amongst The Drive‘s entire car-testing staff.

“All of this silent excellence exists because Honda still understands who buys a CR-V. If you need to get groceries, drive to work, and perhaps pick up kids from school, you need a car that does all that without forcing you to actively think about your car. All of the aforementioned bright points I’ve mentioned are laudable, but even if I weren’t actively reviewing the CR-V, I would still step out and say ‘I really liked it,’ because every component in this Honda works seamlessly together, without ever calling attention to any single element.

“In this sixth generation, there is no rugged, all-terrain-bedecked offroader trim or shoehorned-in-luxury upsell. Honda understands that’s never been what made the CR-V the first choice for American buyers. Instead, you get two choices: Really Good, and Really Good (With Leather). That’s what the CR-V has always delivered, and it’s still got it.” —Victoria Scott, former Staff Writer

“If the Honda Civic is the king of compacts, then the 2022 Honda Civic Si still reigns supreme as its happy, agile sibling. For less than $30,000, you can get an infinitely tossable grin machine that comes only with a manual transmission. Sure, winning drag races is probably not in your future, but that’s not what the Si is about. Whether or not you live near excellent driving roads, the new Si makes everyday driving an event. Even in its most normal modes, it’s still compelling and engaging. That’s largely owed to the very excellent shift-action and a chassis and suspension setup that punch way above their weight. Here, the baseline for fun is already so, so high.

“You really don’t need much more than that.” —Kristen Lee, Deputy Editor

“The Ford Maverick Hybrid is everything an economy car buyer could want, and then some. It’s affordable, pleasant, highly modifiable, fashionable in some circles, and despite being light-duty, still offers more utility than most American families will ever use. It’s what people need, when they need it, and the fact that it’s all of these and one of the cheapest vehicles on sale in the United States just makes me want to kiss it. (And maybe I did, so what?)

“In an era where American automakers are going all-in on trucks that are getting endlessly bigger and more expensive, the Maverick is a surprising reversal of course in more ways than one. Not only does it challenge the body-on-frame pickup’s hegemony, but it also does so as an earnest economy car the likes of which we haven’t seen from an American company since the Model T. In being no more truck than most Americans need, the Maverick is never under-utilized, and therefore fulfills the American ideal of a pickup: A tool to be used. The Ford Maverick is a marvelous truck, and one that I hope to see produced by the millions as soon as the chip shortage abates.” —James Gilboy, Staff Writer

“I believe the newest iteration of the Kia Sportage is really two separate vehicles. One is a backward-looking nostalgic trip into an era where large SUVs had to handle poorly, with all the heft and power over the road that implies; the other recognizes that the world is better now and suffering for comfort is antiquated.

“Crossovers can drive well, they can offer excellent fuel economy, and they definitely can be attractive. The Sportage hybrid realizes all of this in spades with a lower price and comparable stats to most of its hybrid-CUV brethren. If you’re looking to off-road on gasoline alone, look elsewhere, but for the rest of us that live 90 percent of our lives on pavement, the Sportage hybrid is an extremely strong contender.” —Victoria Scott, former Staff Writer

Spending less than $40,000 on a relatively humdrum crossover like the CR-V or Sportage, or a hopped-up version of the Honda Civic isn’t all that mind-shattering. You know what is, though? Getting a rear-wheel-drive, manual, dedicated-chassis sports car for that money. That’s why the Toyota GR86 and Subaru BRZ twins were voted as The Drive‘s Best Car Under $40K.

“The GR86 may be lacking a turbo, but it’s snappy and sassy and it doesn’t give a damn if you like it or not, because it’s so engaging to drive,” wrote former Staff Writer Kristin Shaw. “This could easily be your daily driver that gets you to work and back home, and you can still shake it out on the weekends for some canyon carving or treks up the interstate to the next big town over. This is a solid sports car that’s priced fairly and is a joy to pilot. Heck yeah, it deserves its Gazoo Racing badge.​”

Meanwhile, Reviews Editor Chris Tsui wrote of the Subaru, “Taken as a whole, the 2022 Subaru BRZ is not all that different from the car it replaces. But it is better. It’s quicker, more enjoyable on track, more livable on the street, and better looking.

“Purely as a driving machine, however, Subaru’s rear-drive sports car is supremely well-balanced. Its approachable nature means it’s still a great starting point for anyone looking for their first serious sports car. The increased power means genuine thrill and rewards for seasoned drivers as well. As far as sequels go, the new BRZ is one of the good ones.”

It’s almost easy to make a great, exciting sports car with stratospheric budgets and price tags, but we tip our hats to both Toyota and Subaru for continuing to offer genuine driving joy well south of $40,000 and reward their efforts by awarding the GR86 and BRZ The Drive Award for Best Car Under $40K in 2022.

The post The Drive’s Best Car Under $40K of 2022 Is the Toyota GR86/Subaru BRZ appeared first on The Drive.