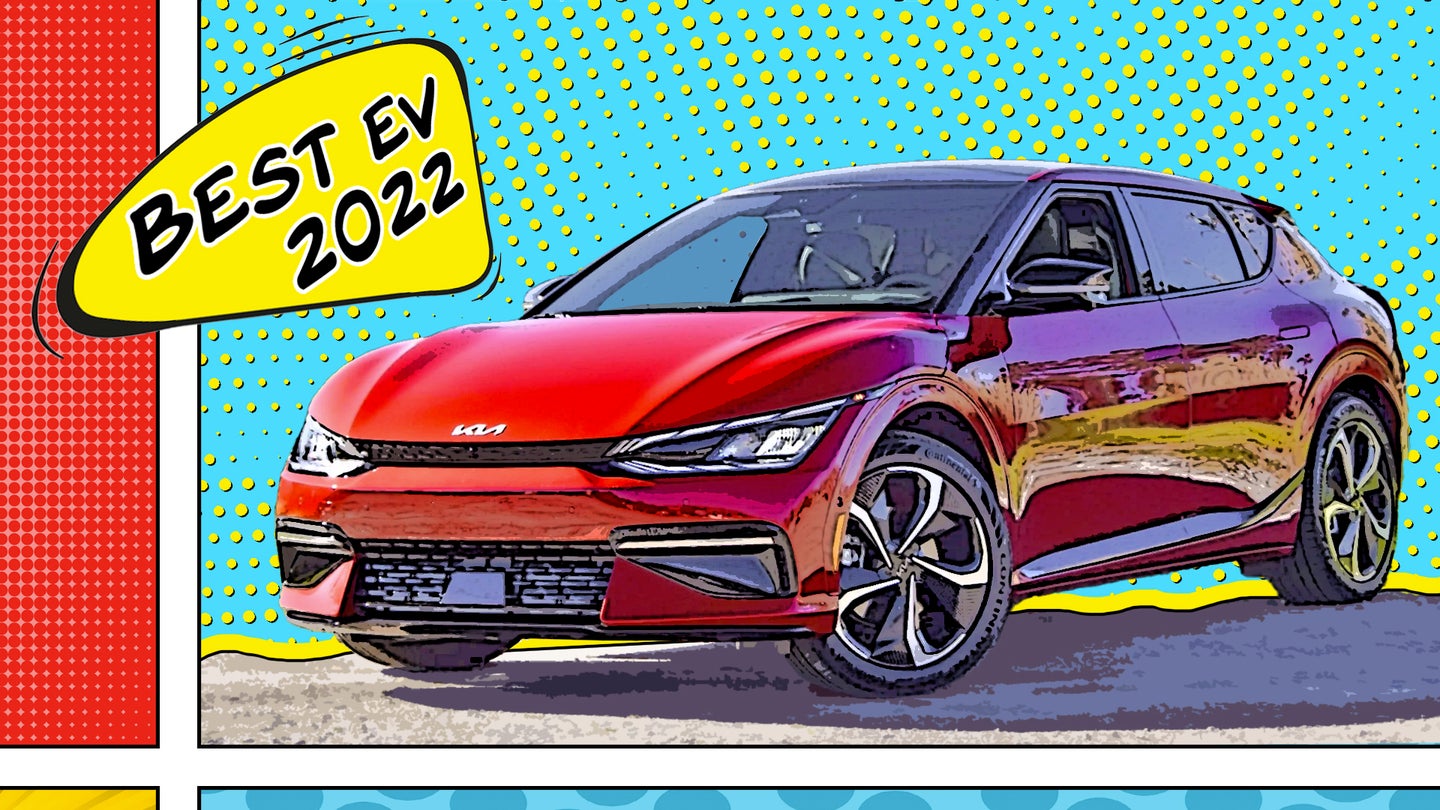 This year saw, frankly, an explosion of new and interesting EVs making it to market. Not all of them were six-figure playthings for the rich, either. There were plenty—especially from Kia and Hyundai—that are affordably priced and overwhelmingly stylish. It’s a trend that’s only going to strengthen as time goes on. EV production may bring up its own issues, but you cannot deny that the lack of tailpipe emissions and the severing of fossil fuel reliance are steps in the right direction.

Since EVs now come in all shapes and sizes (except for a small truck; when’s that going to happen?) we chose this list of runner-ups and the winner based solely on their review score. There’s an SUV, a small SUV, another SUV, a sedan, and a bus. And as a quick note: The reason why stuff like the Rivian R1T and the Ford F-150 Lightning don’t appear on this list is because we’ve categorized them as pickup trucks. So look for ’em in our Best Truck category.

“Once I finally shut my test rig’s door, nudged the R1S out of the parking lot, and sent it down a windy Hudson Valley road, my appreciation for this vehicle swelled immediately and immensely. For all the whiz-bang coolness, neat design features, and lovely microsuede-looking headliner I’d admired on the Rivian at rest, I kept thinking ‘yeah, but can this oversized slot car cruise with the lumbering swagger of my 1975 Scout or lifted Montero?’

“Man, it does. In the most important ways, it really does. Between the expansive hood you’re looking out over, general posture, and most importantly, just the vibe the R1S carries itself with, I had all the big-truck energy I enjoy in my old 4x4s plus an immeasurably more forgiving cornering experience and, of course, almost distressingly intense acceleration capabilities.

“As nice as the R1S’s near-silent operation would be on a cross-country highway cruise, it’s absolutely excellent at low speed and off-road. We spent hours plodding through muddy forest trails in upstate New York in driving rain to a soundscape dominated by animal sounds and splashes, and it ruled.”—Andrew P. Collins, Executive Editor

“The 2023 Cadillac Lyriq is exactly what Cadillac needed: Proof that GM’s luxury division can really make a car that feels special again. The Lyriq embodies the best of GM’s modern EV and ADAS technology, all in a package that’s practical, comfortable, and above all stylish.

“… the Lyriq is an astonishing step forward for GM’s luxury division after a half-century of languishing. It’s a testament to how seriously GM is taking Cadillac, one made all the more impressive by hitting a Tesla-beating $62,000 price point. If this is what Cadillac can do with its first mass-produced EV, then just imagine what the six-figure Celestiq has in store for us.” —James Gilboy, Staff Writer

“Extending the same parallel seen in the i4 and 4 Series Gran Coupe, the i7 is very much an electric version of the 7 Series. They look mostly the same inside and out, and—powertrain aside—drive fairly similarly, too. The muted V8 noises, however, are replaced by Hans Zimmer-produced sci-fi whooshing sounds that, in the context of a non-performance-oriented luxury car, sound almost as exciting and arguably more interesting than the V8.

“Even without a makeshift cinema in its rear row, both the new BMW 7 Series and i7 are splendidly luxurious cars. They’re huge, they drive well for what they are, feel well-built, and rival Bentleys when it comes to backseat comfort.” —Chris Tsui, Reviews Editor

“The ID Buzz is effortlessly cool thanks to its heritage. It helps that the van is nice to drive as well. For four hours, over 90 miles in highway and city driving, the van settled into the background and shuttled in and out of narrow Danish streets effortlessly, and returned 3.1 miles per kWh, which isn’t as efficient as other electric cars with a svelter shape. On the other hand, on the beaches in Malmo, Sweden, the ID Buzz was a head-turner and attracted attention wherever it went.

“What sets the Volkswagen ID Buzz apart is how impressive it is without trying hard at all. That’s cool.”—Aaron Cole, Senior News Editor

Are you surprised? Because I’m not.

The South Korean automakers have been knocking it out of the park recently in terms of well-designed cars that people actually want to buy. I see Kia EV6s everywhere I go, and I’m stoked that they’re really catching on in earnest. Sharing a platform with the Hyundai Ioniq 5 and Genesis GV60, the EV6 comes with either rear-wheel or all-wheel drive. Range estimates land somewhere between 232 to 310 miles.

“[The Kia EV6 is] easy to recommend on the basis of still being everything you want from a technologically advanced new car,” reported Staff Writer James Gilboy. “It looks spectacular, handles great, has competitive range, trustworthy ADAS, and in case you’re hesitant about being an early adopter, an exceptional warranty. It’s hard to ask for much more from a new car—lord knows many EV buyers don’t get nearly as much for their money.”

And if that recommendation wasn’t enough, the EV6 was also the hero of our DC Down Under series, in which James and our Night Editor, Lewin Day, drove one across 1,700 miles of Australian Outback over the course of five days. The car performed great throughout but ultimately did not finish the trip due to a brake issue.

Regardless, the two reported the EV6 as being perfectly livable. It doesn’t use tricks like neck-snapping acceleration or crab-walking to appeal to buyers. Instead, it gains favor by quietly being capable and comfortable. Isn’t that largely the point of owning a car?

Congratulations to the Kia EV6 for winning The Drive‘s Best EV of 2022.

Got a tip? Email me at [email protected]

The post The Drive’s Best EV of 2022 Is the Kia EV6 appeared first on The Drive.