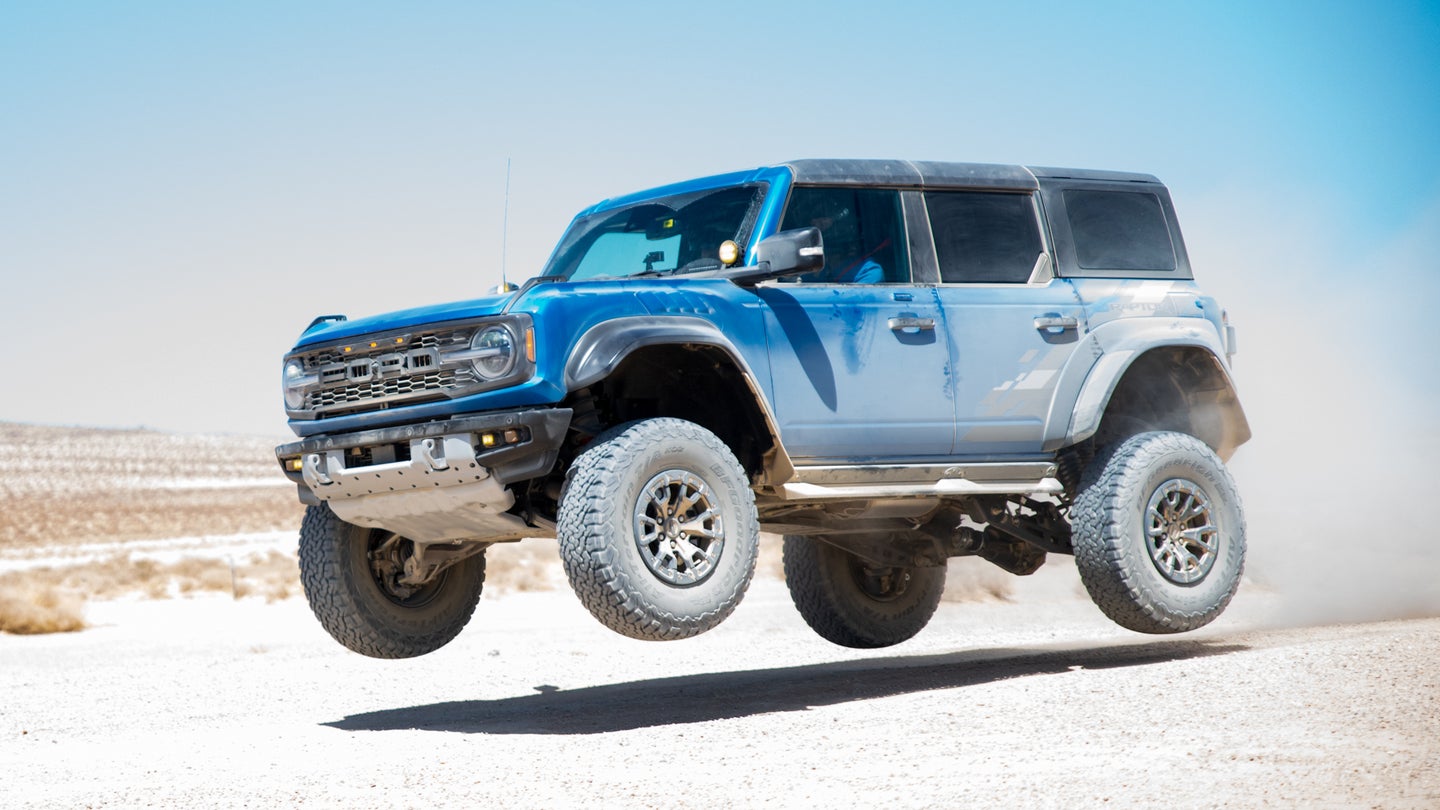 It’s hard to remember a vehicle launch that was more highly hyped than the new Ford Bronco’s. Everyone was stoked to see an off-road SUV that could finally fight the Jeep Wrangler, and we know now that’s exactly what we got. However, some people have fussed about the Bronco’s independent front suspension from the beginning, saying it should’ve been built with a solid axle. It’s still there on the new Bronco Raptor, though Ford has seriously strengthened it for bashing dunes, boulders, and the like.

While we were out testing the Bronco Raptor in Johnson Valley a couple of weeks ago, we broke for lunch at Driven Experiences’ nearby shop. There, they had a pre-production model up on the lift with the wheels off. I took advantage of this by snapping a few photos and asking Chris Paiva, the Bronco Raptor’s lead chassis development engineer, for a walkaround.

“The frame rails are very similar to the base Bronco, but we’ve extended the upper shock tower to get a longer shock and more travel,” Paiva explained. “We’ve also reinforced that area for more durability.”

Those shock towers are obscenely tall—I’m 6’5″ and they come up past my belly button. Keep in mind that this rig comes standard with 37-inch BF Goodrich K02s, which are even bigger than the 35s a normal Bronco with the Sasquatch package gets. This also gave Ford more reason to reinforce the front end.

“Then we extended the control arms out three inches—both upper and lower—which is how we get the increased wheel travel with 13 inches in the front,” Paiva continued. “We’ve also put these giant aluminum control arms on the bottom, the uppers are forged steel, and there’s an aluminum knuckle.”

When I asked why the lowers are aluminum rather than high-strength steel, Paiva said, “It’s weight, mostly. You have much more material in the lower control arm so the weight save is much bigger on the lower than the upper.”

As suspected, the Bronco Raptor applies many of the lessons learned from the F-150 Raptor. They’re built on different platforms, as the Bronco actually rides on the same T6 architecture as the Ranger pickup. But that didn’t prevent Ford from copying certain parts from the high-performance F-Series and pasting them over to the Bronco Raptor.

“Basically, this entire outer module—the knuckle, brake and wheel bearing assembly—that’s all shared with the F-150 Raptor,” Paiva noted. The same thing with the shock; this is actually the same Fox Live Valve that comes from the Gen 3 F-150 Raptor. We’ve obviously tuned it, but the actual guts inside the shock are all the same.”

Those shocks are impressive, for sure. Ford will go on and on about how they measure oncoming terrain data more than 500 times a second, but I’ll just put it this way: They work better the faster you go, up to a point. You shouldn’t test them out at top speed on an unfamiliar trail, but when I familiarized myself with Ford’s high-speed course at 40 miles per hour, I felt the bumps way more than I did at 60 mph a few laps later.

With all these improvements to the IFS, it was only right to make a few adjustments to the rear suspension as well. Ford performed a host of modest tweaks to ensure that Dana 50 axle can twist and contort the way it should, and there’s 14.1 inches of travel back there. It’s impressive to see how planted the Bronco Raptor remains when driving through a boulder field; as cool as it is to see a rig up on three wheels, you really want max articulation with all four tires on the ground.

“We changed the way the upper control arm mounts versus the base Bronco,” Paiva said. “The base Bronco has, like, a coil pocket that’s very similar to the front; we’ve gone to this crossbar design and reinforced that area for durability. We’ve also changed the rear geometry just a touch, and we’ve actually moved some of the rear control arm mounting points to get them out of the rocks.”

You can see, then, that the Bronco Raptor is more than big tires and absurdly wide fender flares. The engineering team behind it worked diligently to ensure it can hold up to exceptionally high speeds and triple-digit heat at the same time. I’m not saying the truck is invincible, but if it really does share that much with the F-150 Raptor, you’ll probably break before it does.

The post The Ford Bronco Raptor’s Front Suspension Is Tough Enough. Here’s How appeared first on The Drive.