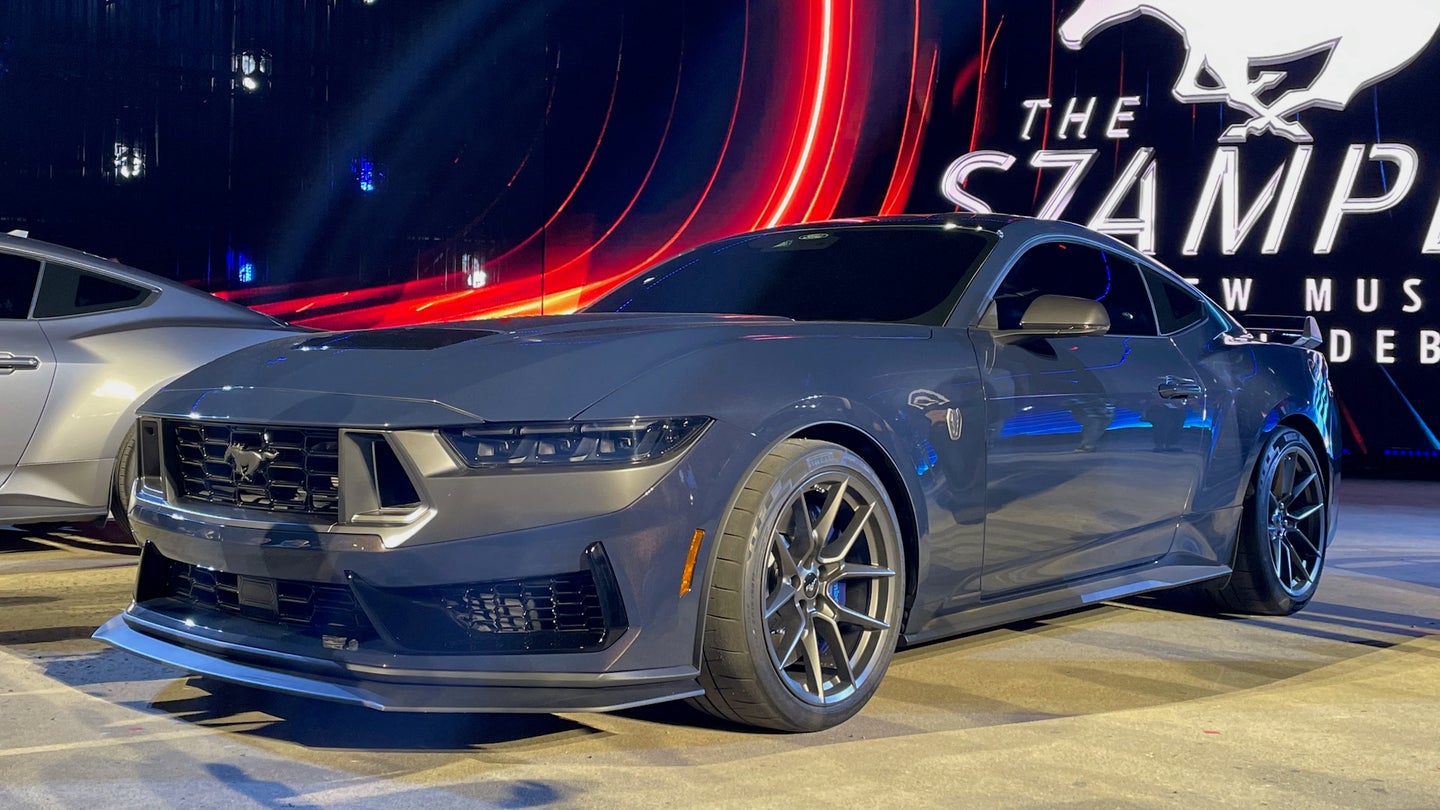 The Blue Oval threw a bit of a curveball at Wednesday night’s 2024 Ford Mustang reveal: the Dark Horse. A whole new high-performance nameplate and a ‘roided-up version of the sharp new ‘Stang. It appears to get inspiration from Mercedes-AMG’s Black Series and, y’know, Cadbury Royal Dark Chocolate.

Sporting a new, sinister horse-head badge, the Mustang Dark Horse is powered by “the most powerful Coyote” V8 ever, immediately taking that specific crown away from its Mustang GT brethren. Using connecting rods borrowed from the GT500, Ford says the Mustang Dark Horse is targeting 500 horsepower, which transitively tells us that the regular Mustang GT will have, well, less.

Good news for fans of great manual gearshifts! Dark Horse pairs the Coyote with a manual transmission from Tremec that has evolved from the previous-gen GT350 and Mach 1. This gearbox will get a special oil cooler and be topped off by a 3D-printed titanium shift knob. The 10-speed auto is also available if you must. Carbon fiber wheels will be available while standard MagneRide suspension is said to feature “next-generation controls.” Ford says the entire car was honed for the track.

An available Handling Pack adds a gurney flap-integrated rear wing, stiffer springs, even bigger sway bars front and rear, as well as Pirelli Trofeo tires on wider wheels. Inside, the steering wheel is thicker, the contrast stitching is blue, and trim that’s silver on regular Mustangs is switched out for black.

It’s very cool and more than a little unexpected for Ford to bring out a high-po version of this Mustang so early in the game. But given the Dark Horse “only” makes about 500 HP (the previous gen GT350 made 526 HP), we expect the inevitable Shelby versions to take this generation of Ford muscle car to even greater heights in the future.

Got a tip or question for the author about the new Mustang Dark Horse? You can reach him here: [email protected]

The post The Ford Mustang Dark Horse: A Brooding, 500-HP Track Star With a Tremec Manual appeared first on The Drive.