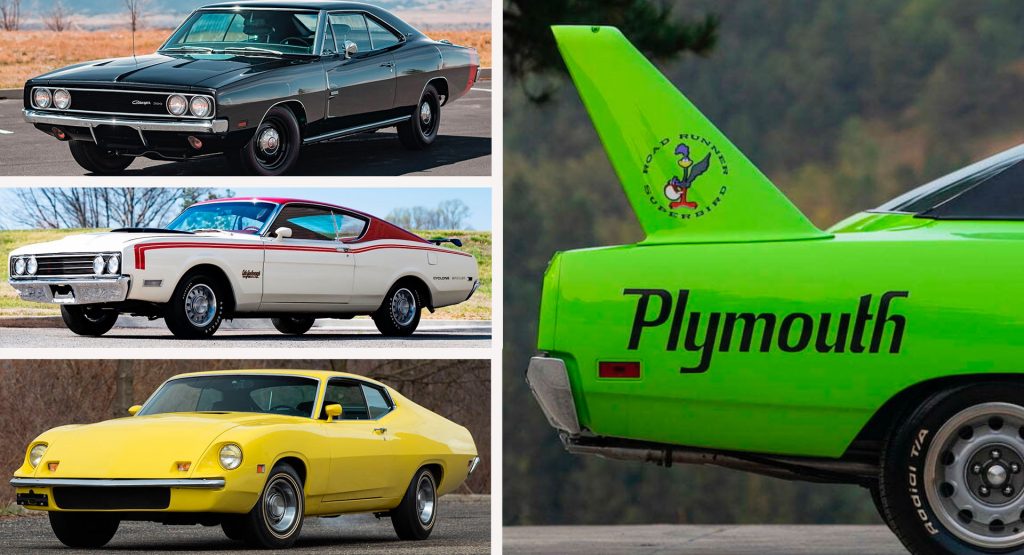 Thanks to the 1970 Plymouth Superbird and its fractionally less famous 1969 Dodge Charger Daytona sister, most car nuts know about Detroit’s early attempts to incorporate aerodynamic tricks to win in NASCAR.

Even the most casual car fan will recognize the Superbird’s droop-snoot front end and towering rear spoiler, a combination that helped it clinch the 1970 championship for Chrysler, but was so visually polarizing, the road cars built to homologate the racers struggled to find buyers.

Today, of course, the Superbird, and the Daytona, which actually predated it by half a season, are hugely collectable, and worth big money. So it’s no surprise that when Mecum Auctions published its list of lots for this month’s Indy 2022 sale, we posted a story about a stunning Hemi-engined Daytona being billed by the auction house as one of the event’s main attractions.

Related: Highly Optioned 1969 Dodge Charger Daytona With Manual ‘Box Is One Of 22 Ever Made 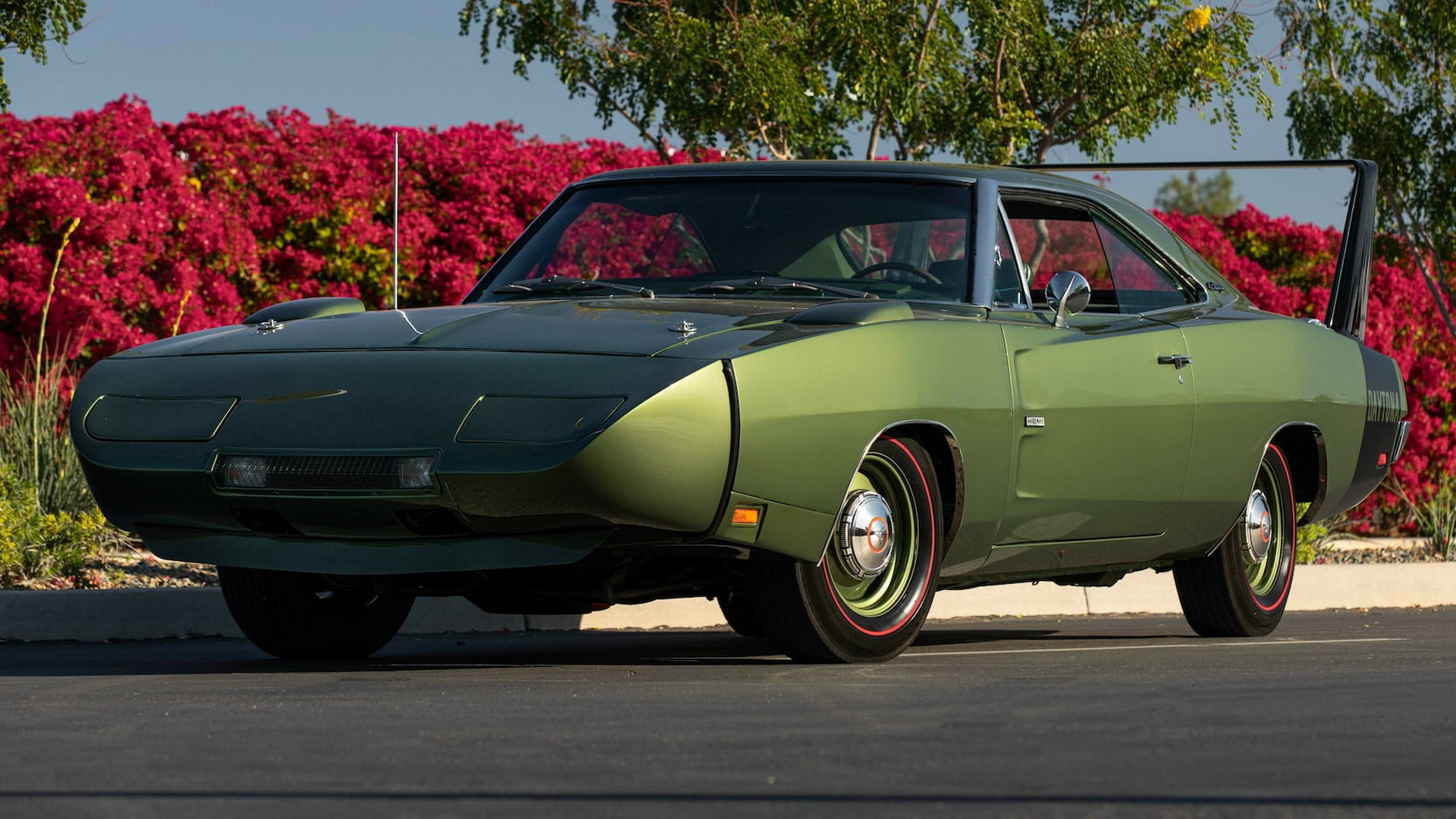 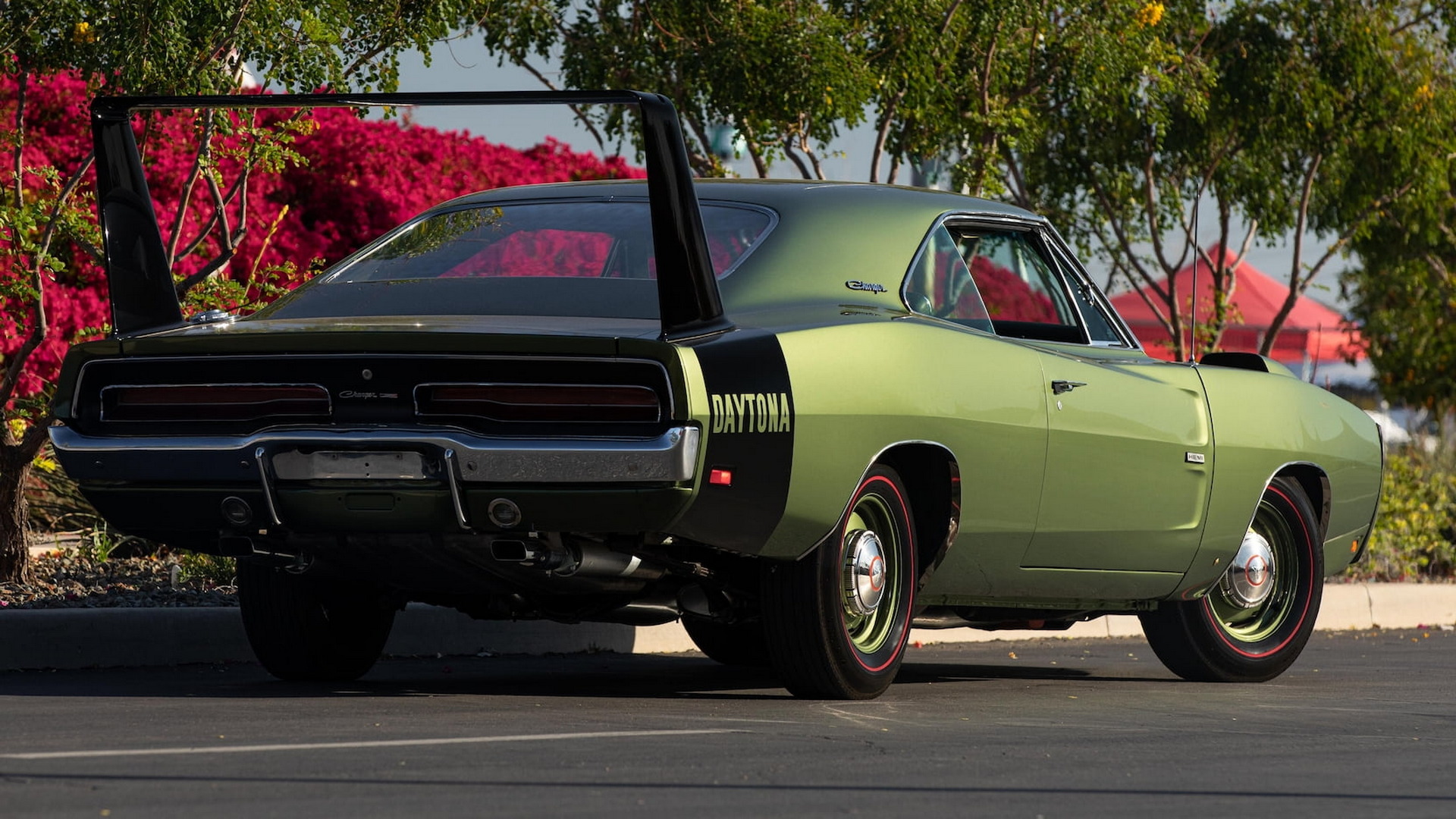 One of only 22 cars equipped with both the optional Hemi and a four-speed manual transmission, it’s also believed to be the most highly-optioned Hemi Daytona, and has an estimated sale price of $1.1-1.3 million.

But with so much focus on the winged Chrysler cars, and the kudos that comes with the Charger Daytona being the first car in NASCAR history to lap at over 200 mph (322 km/h), it’s easy to forget that they weren’t the only aero cars from the late 1960s. There were other key players in the battle to use airflow management to win in NASCARS’s Grand National series, and Mecum has at least one example of almost every one of them at the very same Indy 2022 sale. 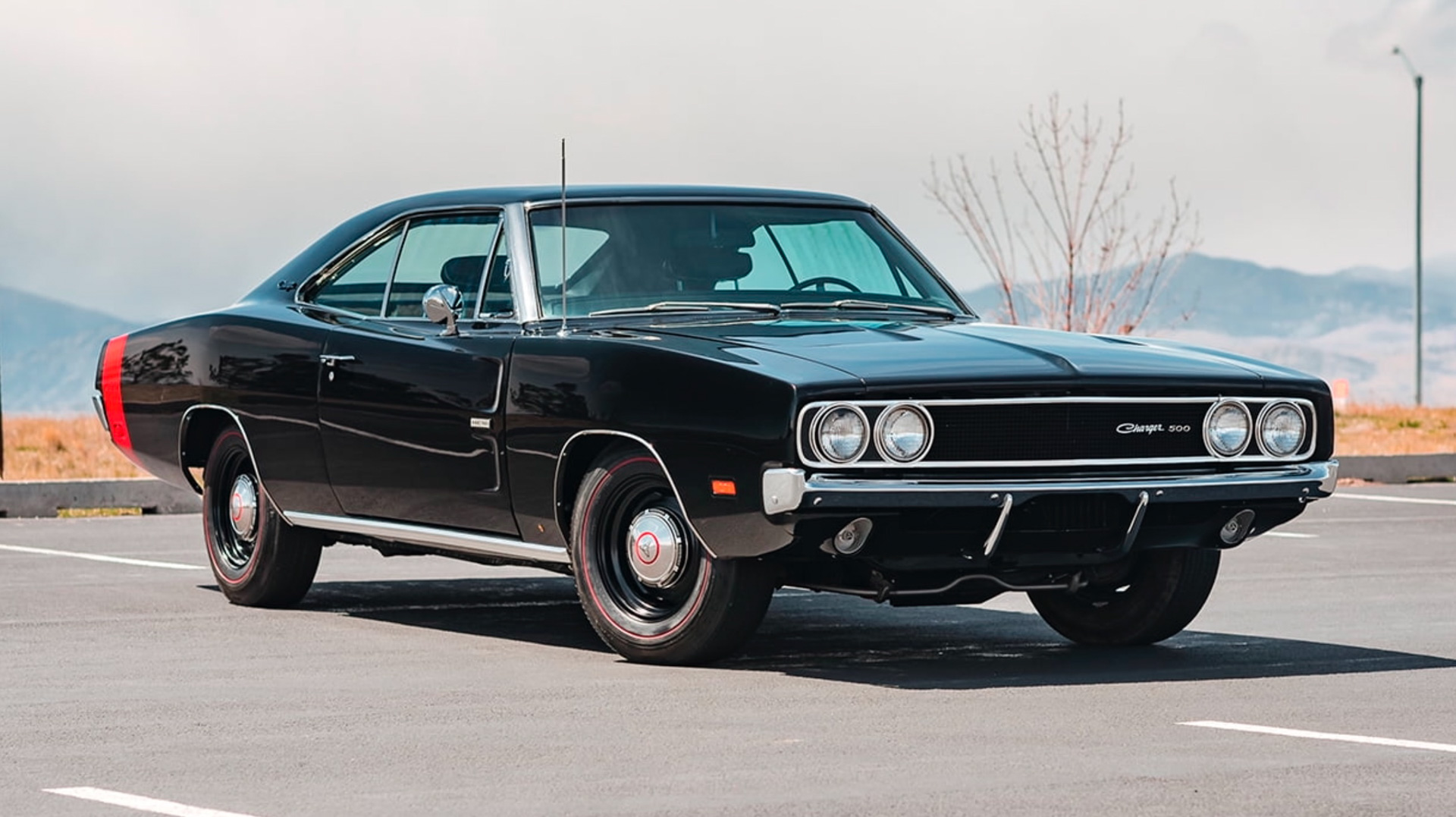 The Charger Daytona appeared midway through the 1969 season, but it wasn’t Chrysler’s first attempt to make the Charger more slippery. The road-going ’68 Charger had a sexy recessed grille and hidden headlights, plus an even sexier recessed rear window that nestled between sweeping C-pillar buttresses. It looked sensational on the street, but both those design features costs the Charger valuable speed on racing ovals. 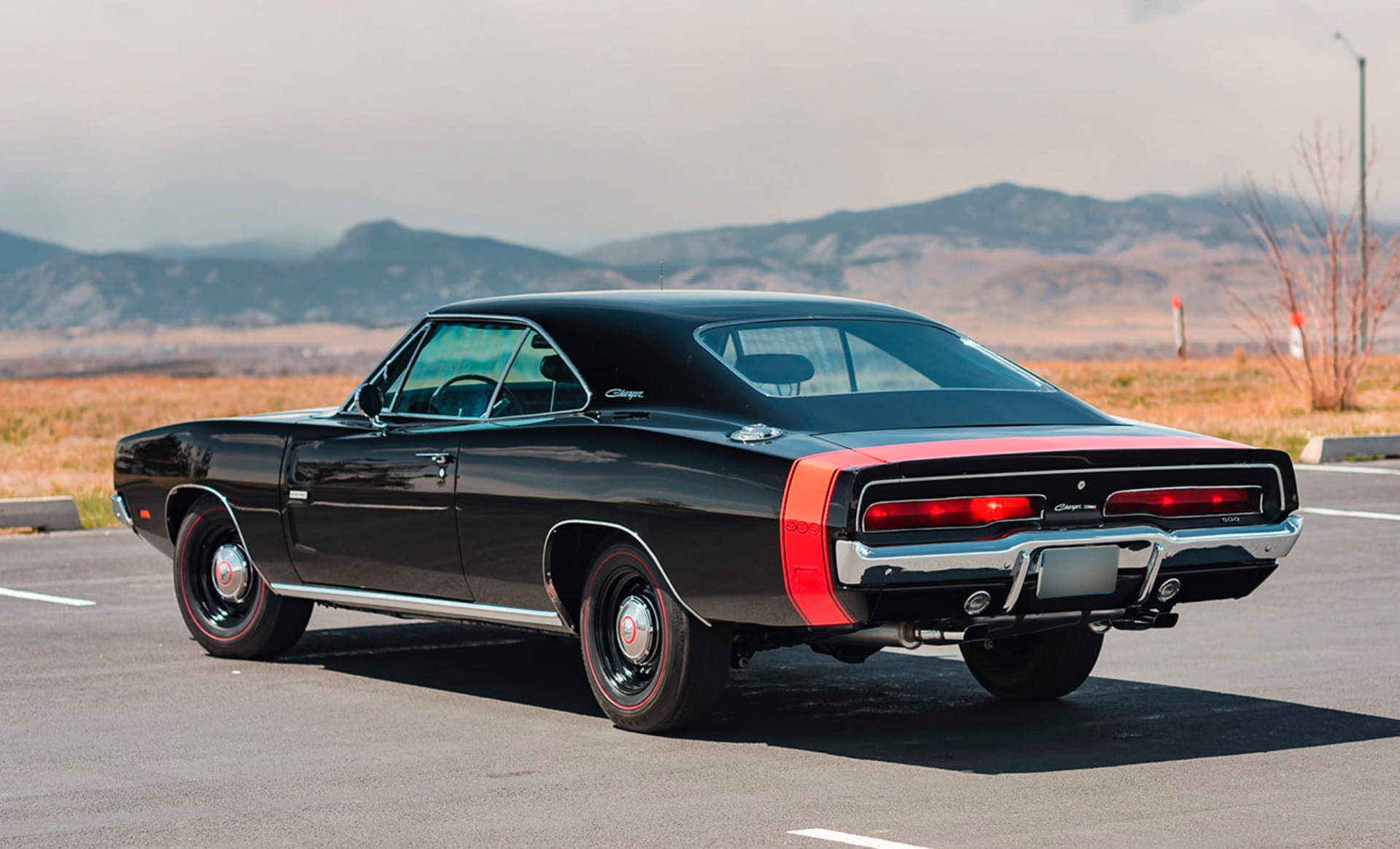 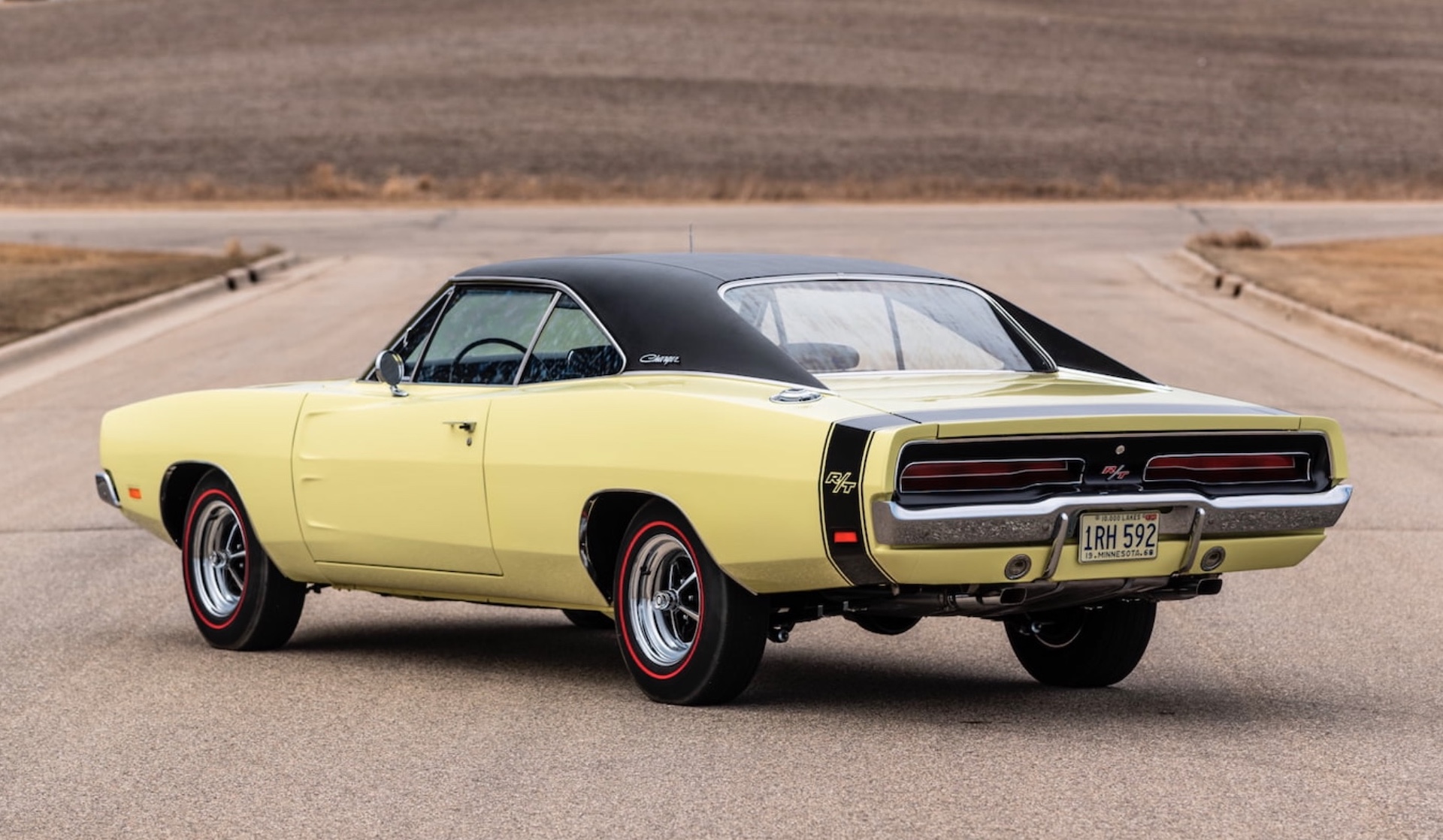 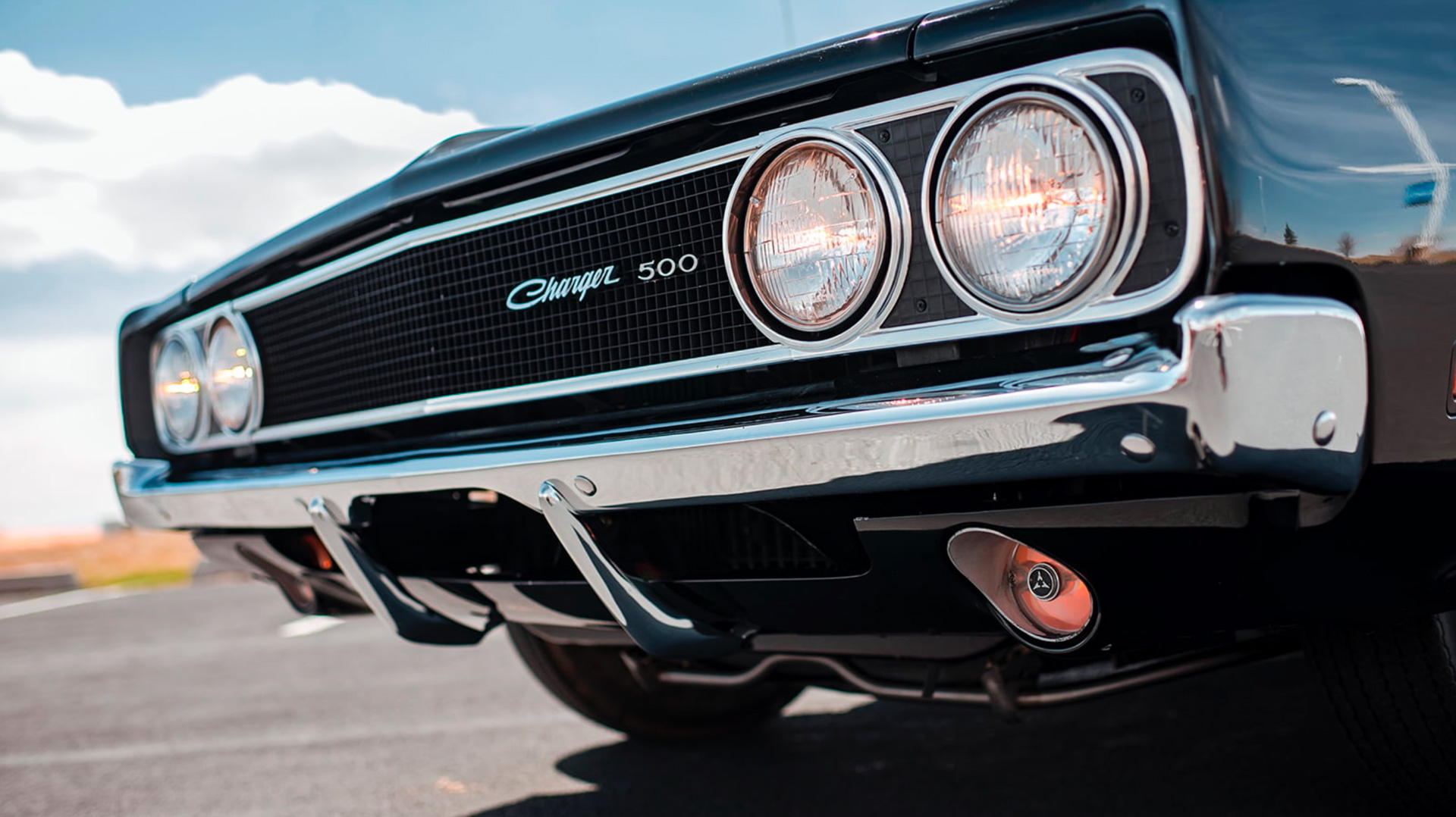 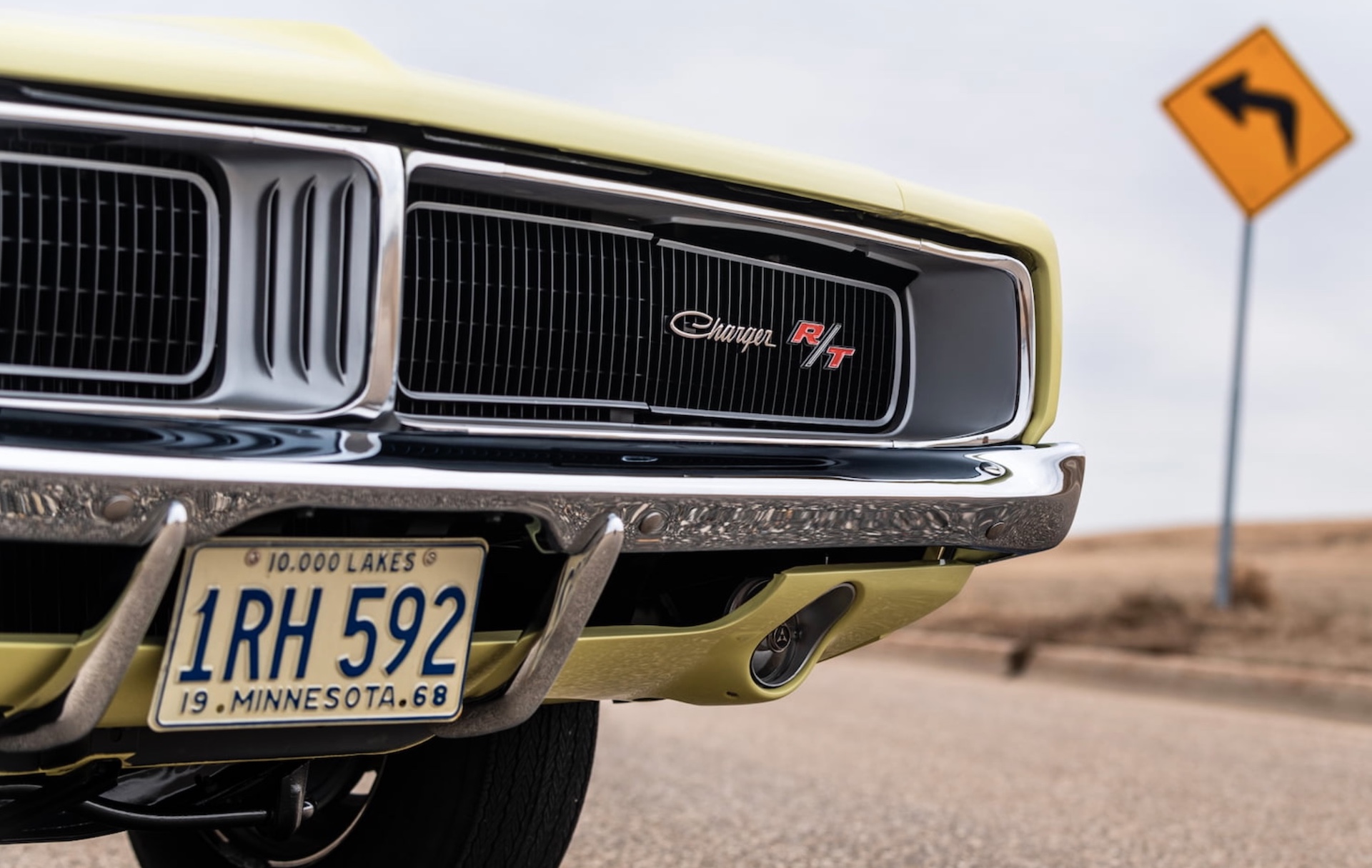 Engineers fitted a grille from the humble Coronet sedan that shared the Charger’s B-body chassis, mounting it flush with the leading edge of the hood, and smoothed off the rear end, pulling the rear window out till it lined up with the back of the C-pillars. 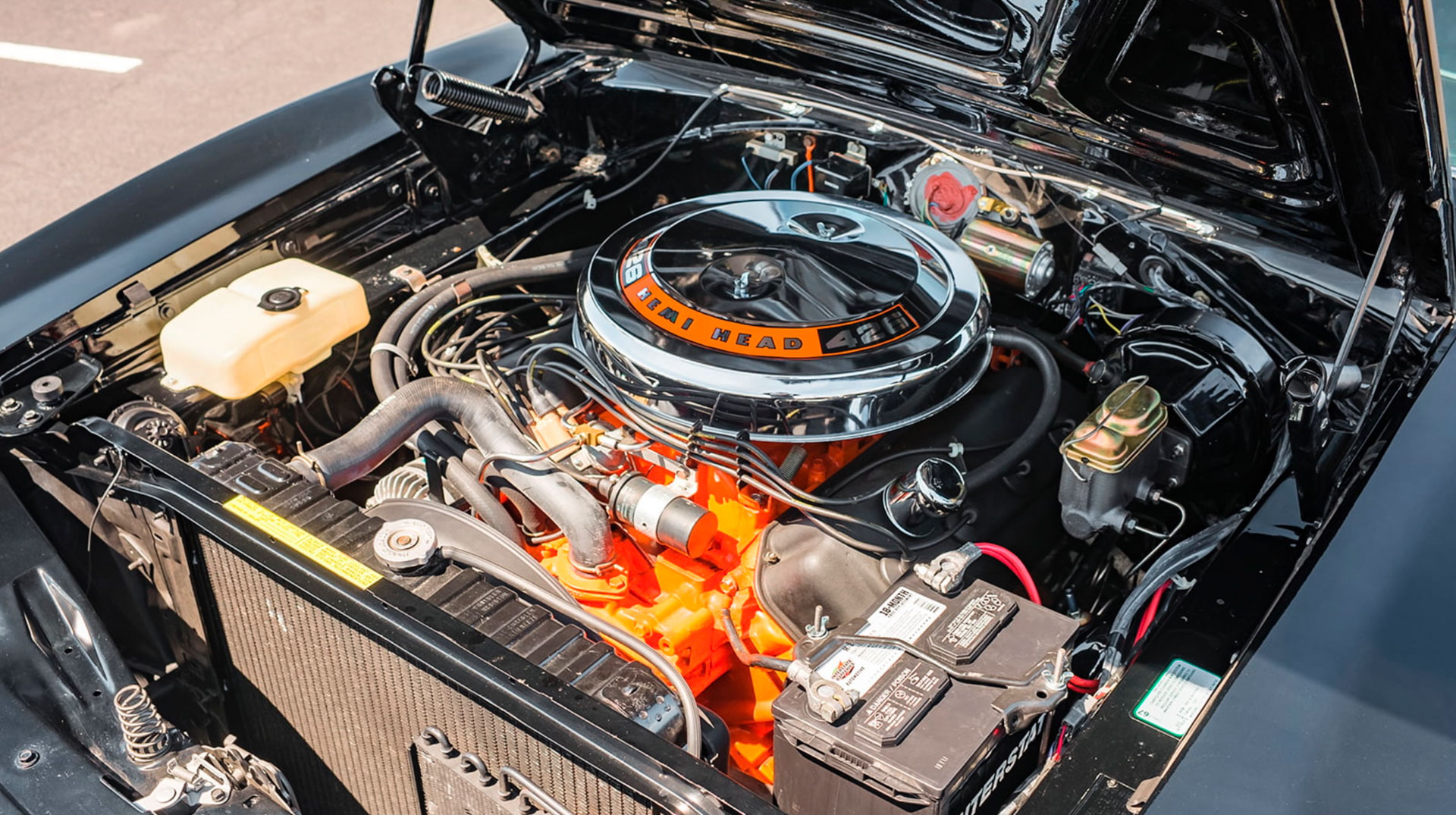 Sadly, those changes weren’t enough to help Dodge overcome its rivals at Ford, which had also been thinking about how to make their own cars slip through the air more easily. The 500 did win numerous races, but Ford’s aero cars were winning even more, forcing Chrysler to up its game and develop the radically different Charger Daytona. The Daytona made its debut during the 1969 season but came too late to stop Ford taking that year’s spoils. 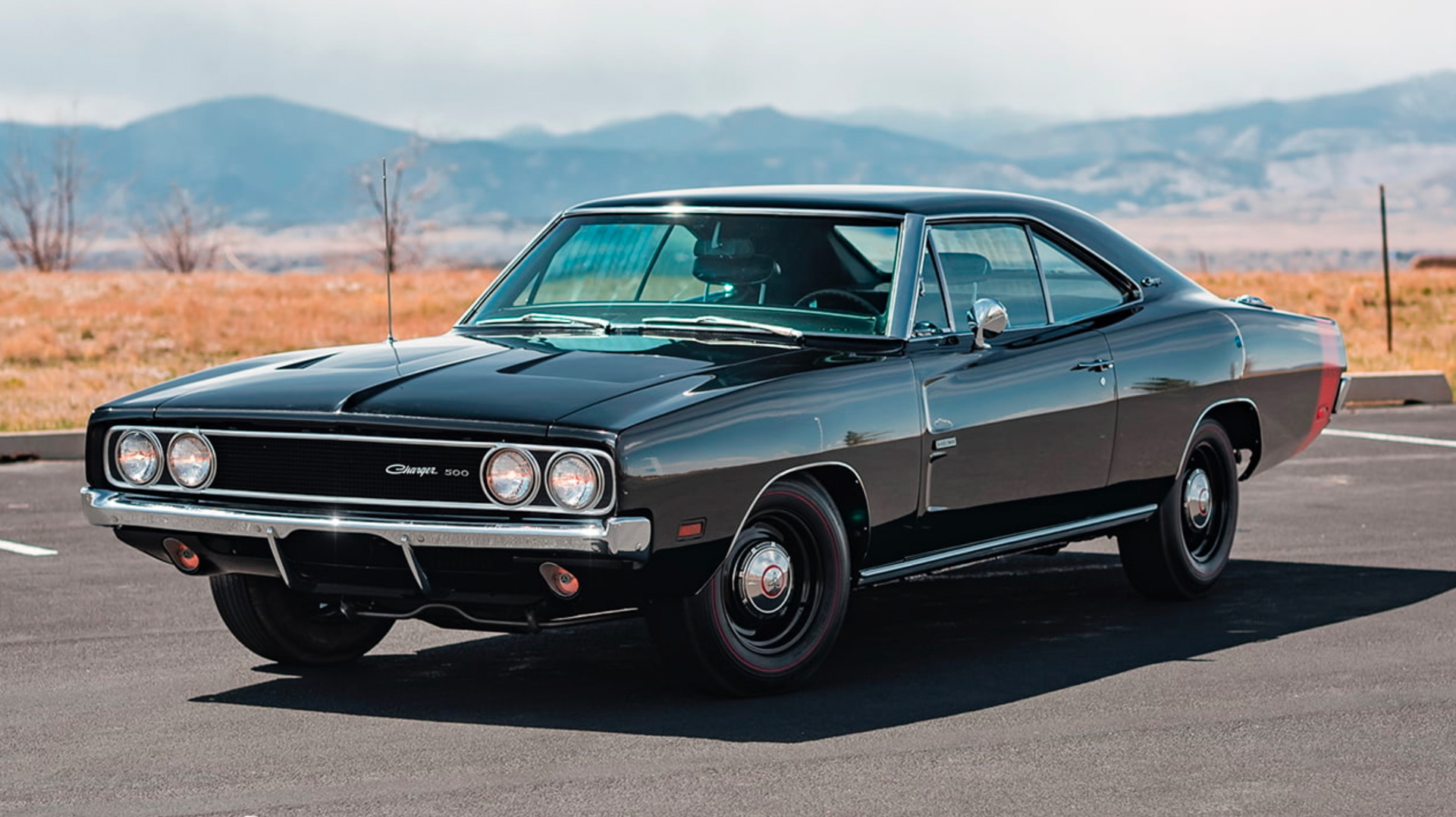 So you might say the 500 was a failure, or you might look at it more kindly as an important stepping stone to the more famous, and more successful, winged cars that followed. Either way, the 500 is an interesting machine, and the car pictured here is particularly fascinating because Mecum’s listing says it’s one of 52 Hemi-equipped 500s and has covered in incredible 200 miles (124 km) from new. It carries an estimate of $300-350,000. 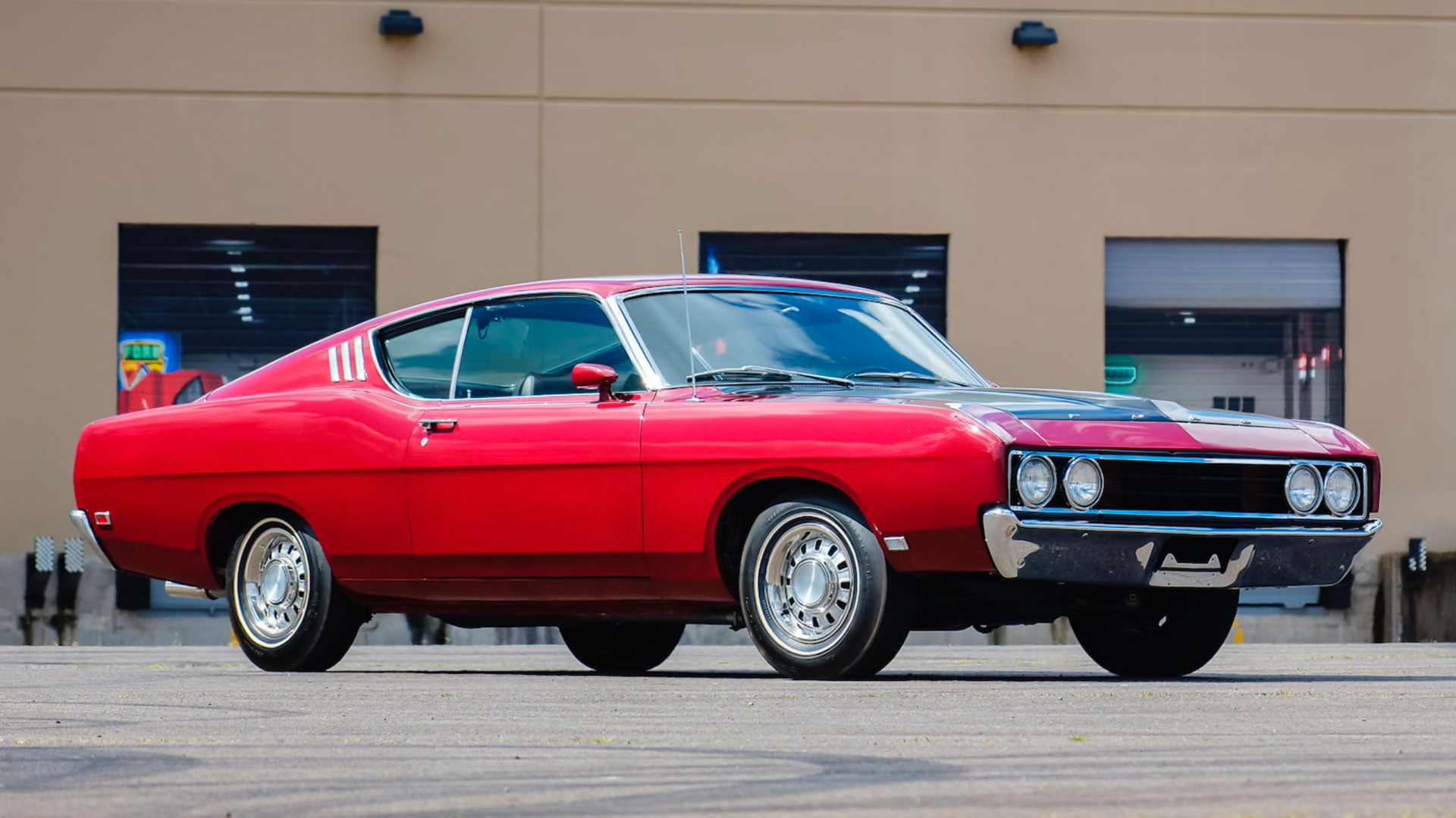 Ford had secured first place at the end of the 1968 NASCAR season, stealing Chrysler’s crown, and to add insult to injury, former Chrysler golden boy Richard Petty had switched sides and was driving for the Blue Oval in 1969 alongside ’68 champ, David Pearson.

And Ford had something else up its sleeve. Like Dodge, Ford had realized that making its cars cut through the air more cleanly could help it gain valuable speed on track, maybe even pushing is cars close to the mythical 200 mph (322 km/h) mark. So it took its 1968 season-wining Torino and set about making it even faster, calling the result the Torino Talladega after the brand new superspeedway in Alabama. 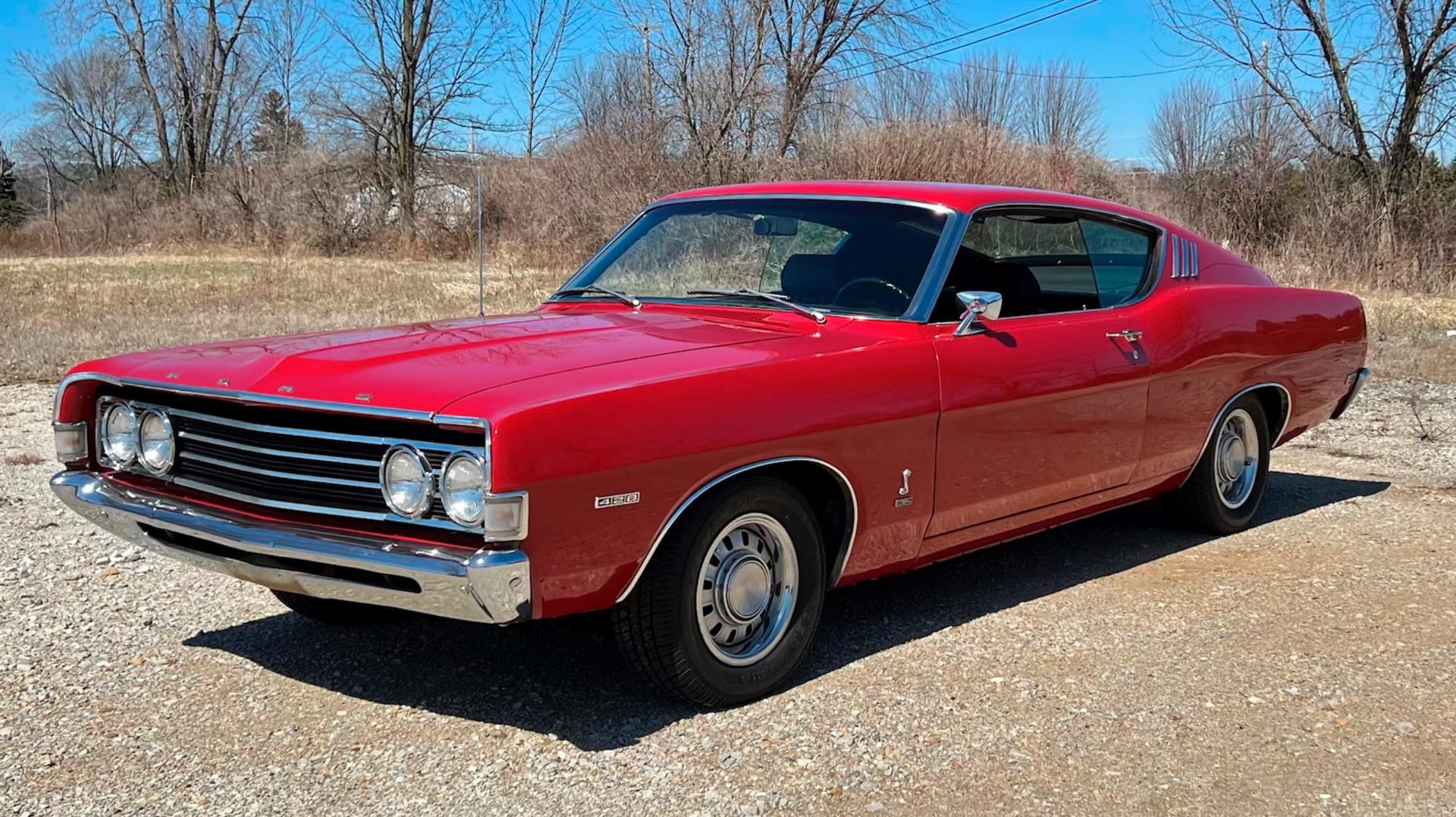 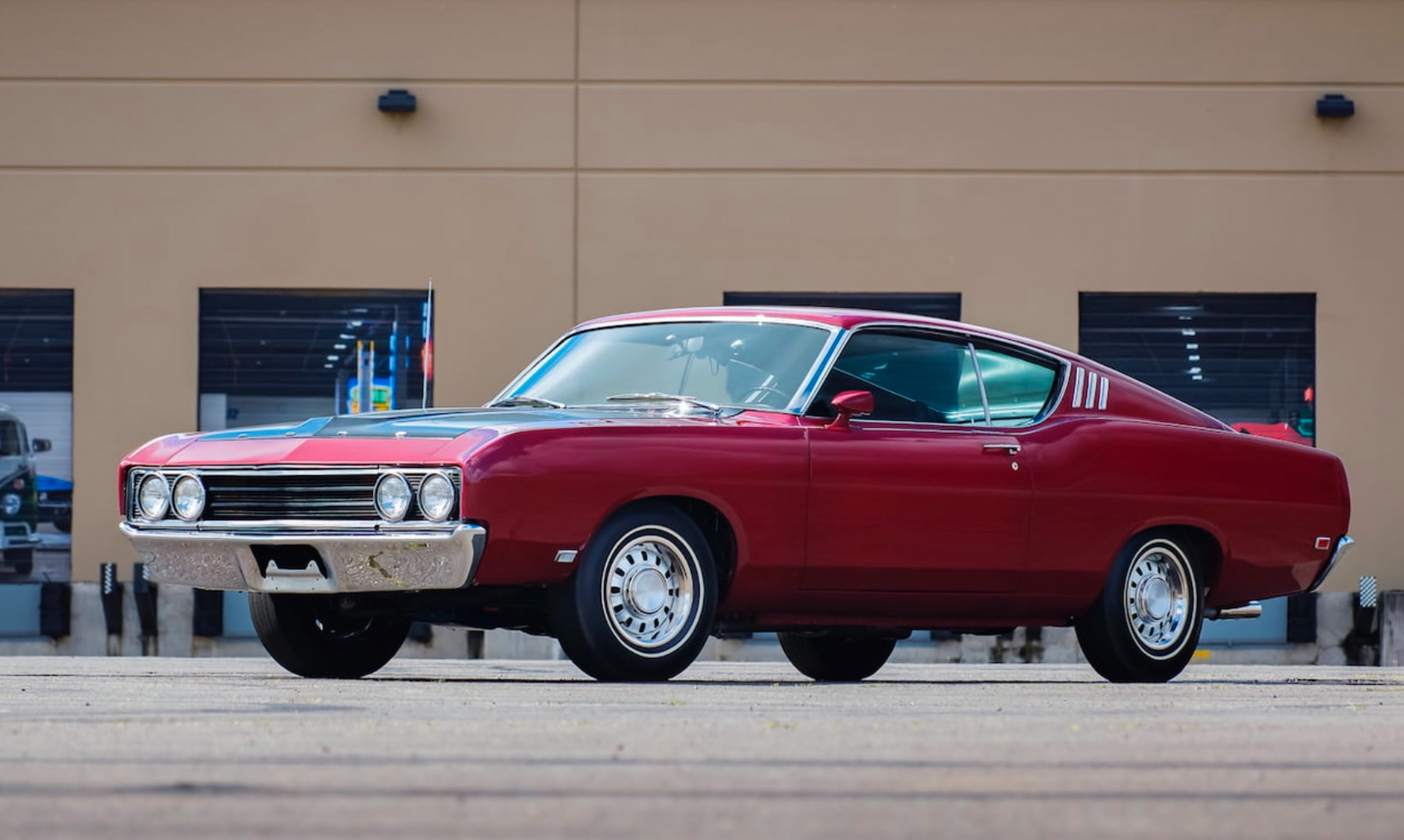 At first glance, the 1969 Talladega (bottom picture) doesn’t look radically different from a regular 1969 Torino SportRoof fastback (top picture), and certainly not as wild as the Charger Daytona that would make its debut later that season. But don’t be misled. Ford put plenty of effort into the Talladega project, even going so far as to shut down its Atlanta, Georgia plant where Torinos and their Fairlane brothers were built for two weeks to concentrate on building enough of the special machines to meet Nascar’s 500-unit homologation minimum. 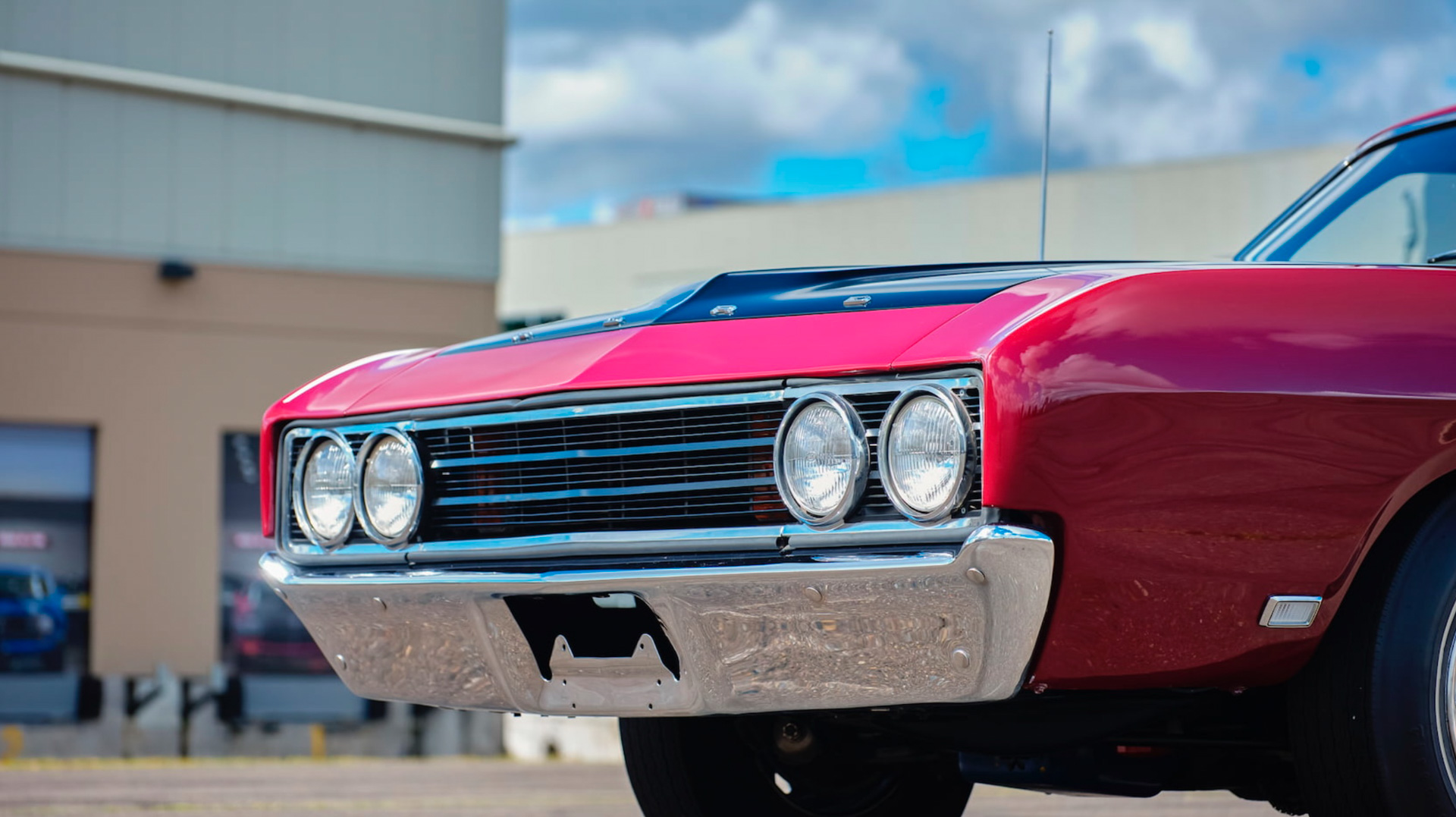 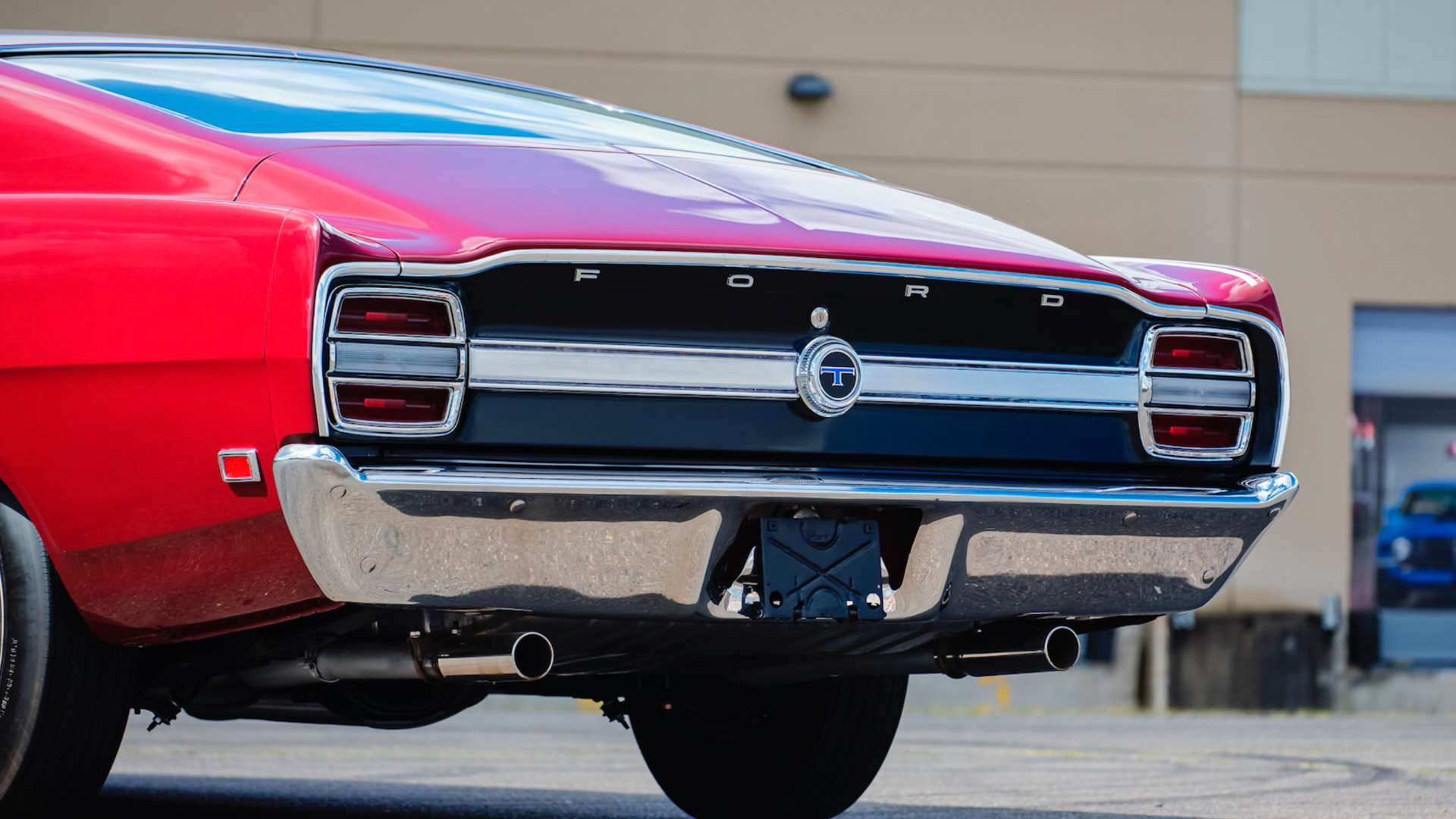 Still wondering what was so special about the Talladega? First there’s the matter of the extra 5.9 in (150 mm) of metal grafted to the nose, which tapered slightly towards the ground to give a smaller frontal area, and finished with a Fairlane grille that, like the Charger 500’s, was pulled flush to get rid of the standard car’s recessed area.

The extra snout length required Ford to weld in additional metal to the fenders and create a filler panel between the grille and the matte black hood, and the front bumper was actually a Fairlane rear bumper that had been chopped into three sections, welded back together and then re-chromed. The finishing touch is the one that’s hardest to spot: Ford rolled the sills so that it could lower the racing versions of the Talladega much further while still complying with NASCAR’s minimum ground clearance rules. 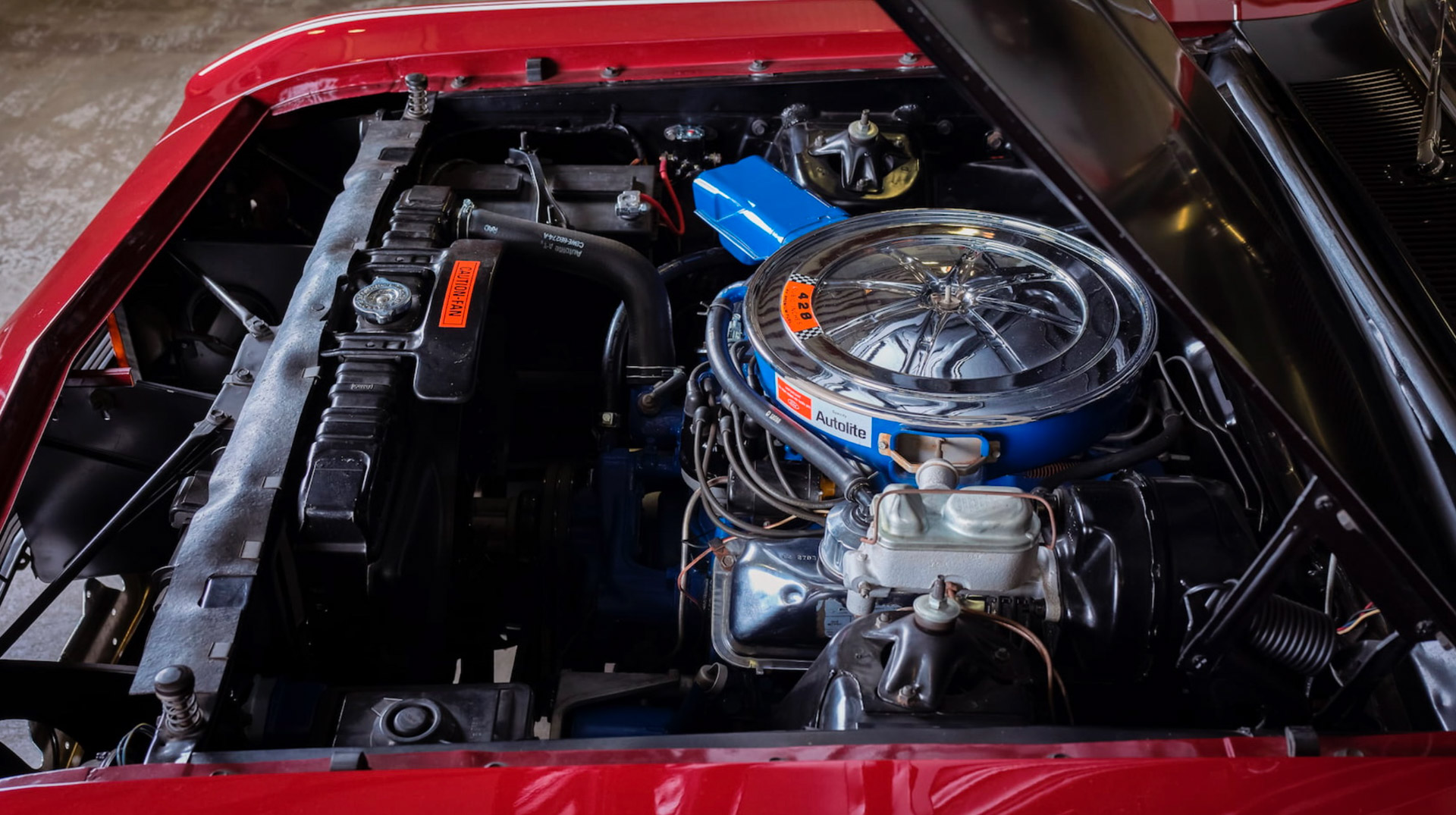 Under the hood, every one of the 750 street-legal Talladegas came equipped with a Ford 428 cu-in (7.0-liter) Cobra Jet V8 rated at 335 hp (340 PS) and driving a Traction-Look diff through a three-speed automatic box, though that’s not what you’d find between the race cars’ shock towers. Early versions ran Ford’s 427 Tunnel Port FE V8, which was strong, but getting on in years. But the 427 was just a stop-gap until the Talladega’s intended engine was finally ready: the Boss 429.

Wait, wasn’t the Boss 429 a Mustang? It was, and for reasons best known to itself, Ford chose to homologate its new hemi-head 7.0-liter 429 by fitting the required number of engines not to road going Torinos, but Mustangs. NASCAR had no problem with that kind of swap, but Ford’s engineers did. They subcontracted the complicated shoehorn job to Kar Kraft, which was forced to completely re-engineer the front end of the car to get the wide, 375 hp (380 PS) motor to fit. 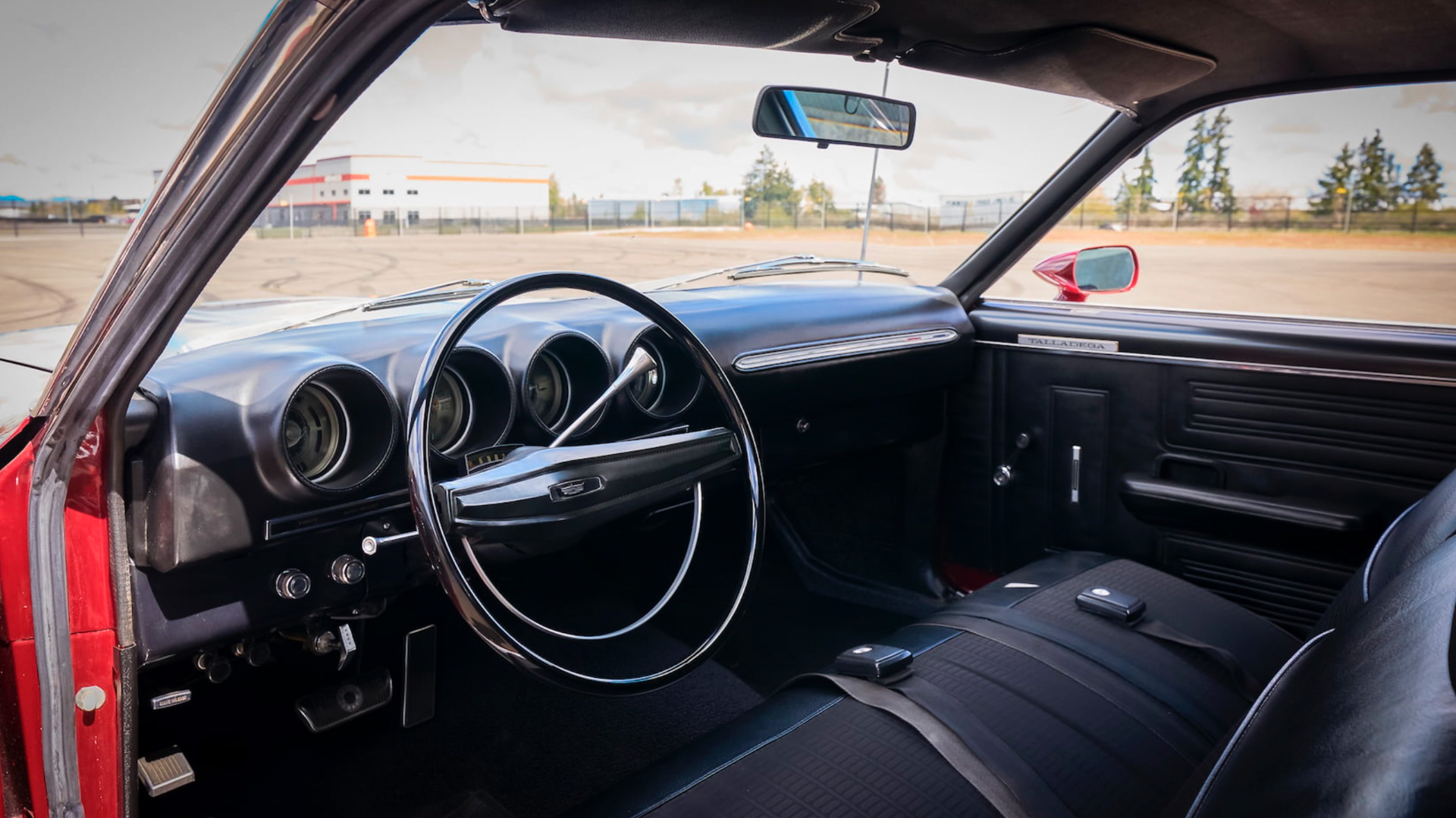 Unlike 1969 Boss Mustangs, Torino Talladegas were pretty basic inside, with simple bench seat cabins and column-change shifters, no rev counter, and they came in just three colors: white, red and blue. Those bench seats wouldn’t have offered much side support on a NASCAR oval, but fastened into a proper bucket seat, drivers like Pearson and Petty racked up win after win to secure overall victory in the Manufacturers’ Cup for Ford, with Pearson nosing ahead of Petty to take best driver’s honors.

Today, the Talladega ticks almost every collectable box: it’s relatively rare, and it doesn’t only have motorsport pedigree, but is a genuine homologation car. If this was a Porsche it would be worth hundreds of thousands of dollars. Yet the Torino is a bargain. Mecum has both red and white cars up for grabs in its May sale (blue was also available) and the red car’s $50-75,000 estimate makes it look like great value. 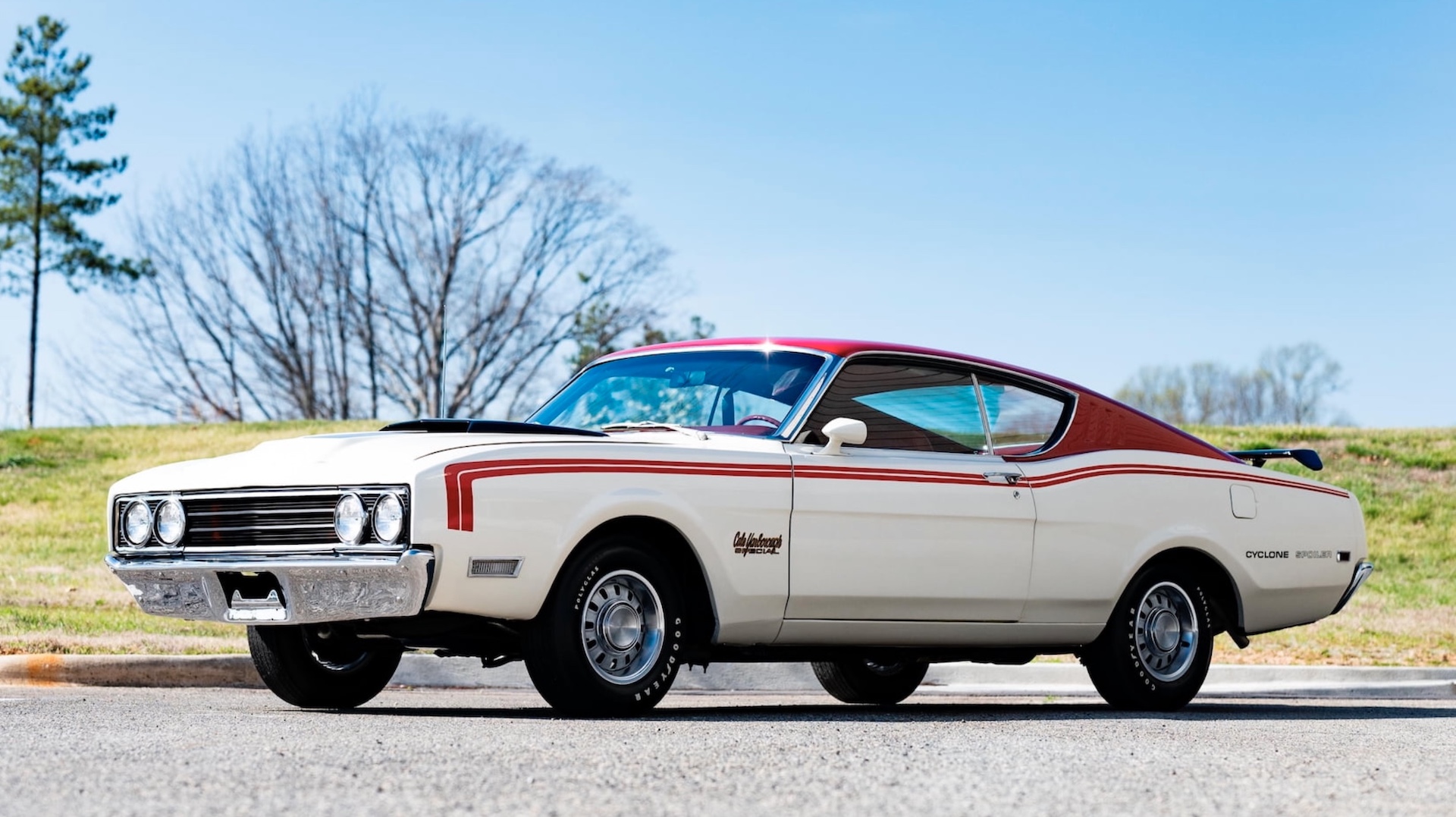 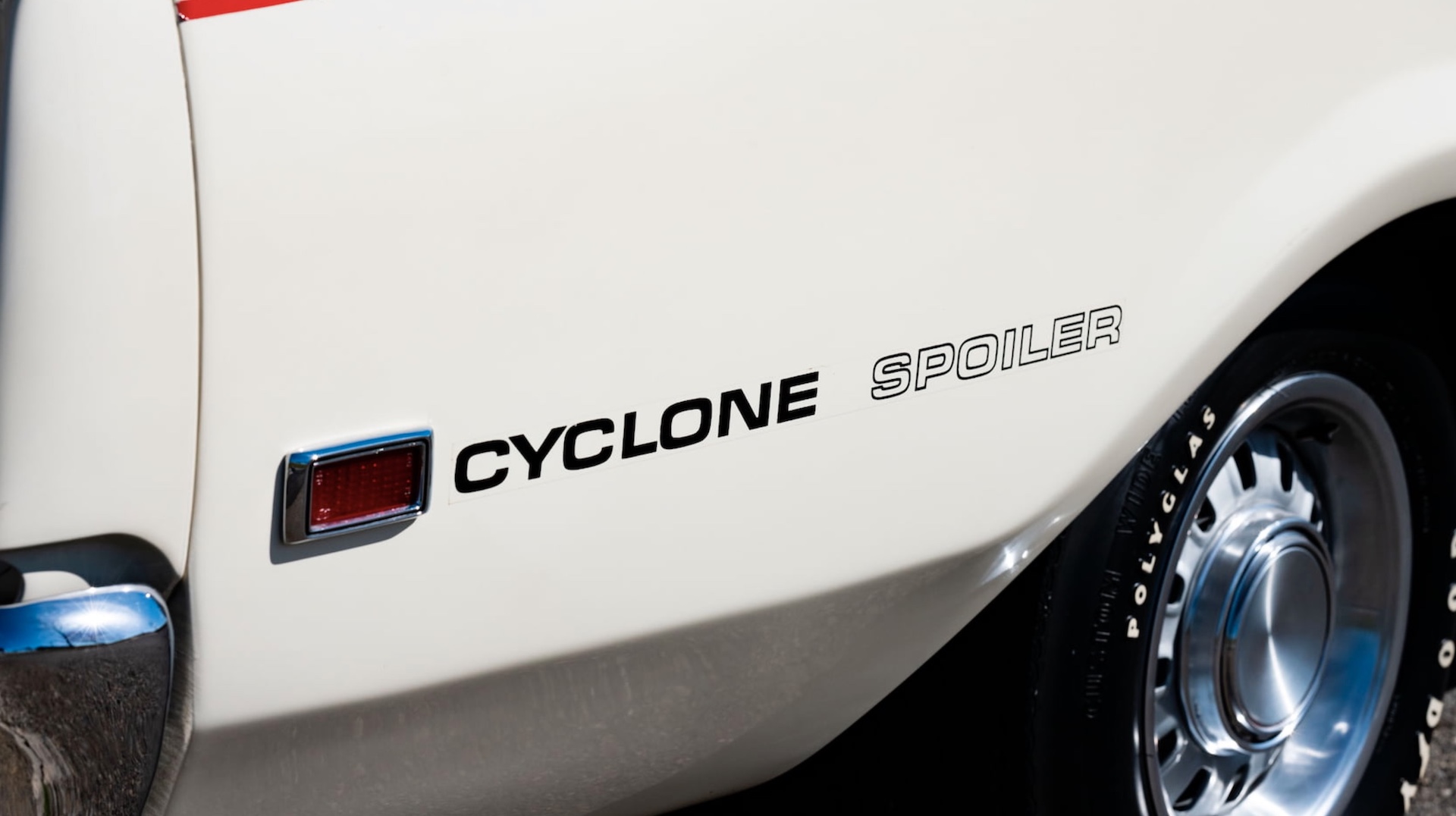 No celebration of the Torino Talladega is complete with a mention of its Mercury Cyclone Spoiler II twin. Except that they’re not really twins at all. Yes, the basic Cyclone was a badge-engineered Torino, and both got radically extended front-end sheetmetal, but crazy as it seems, that extra sheetmetal is completely different in each case. 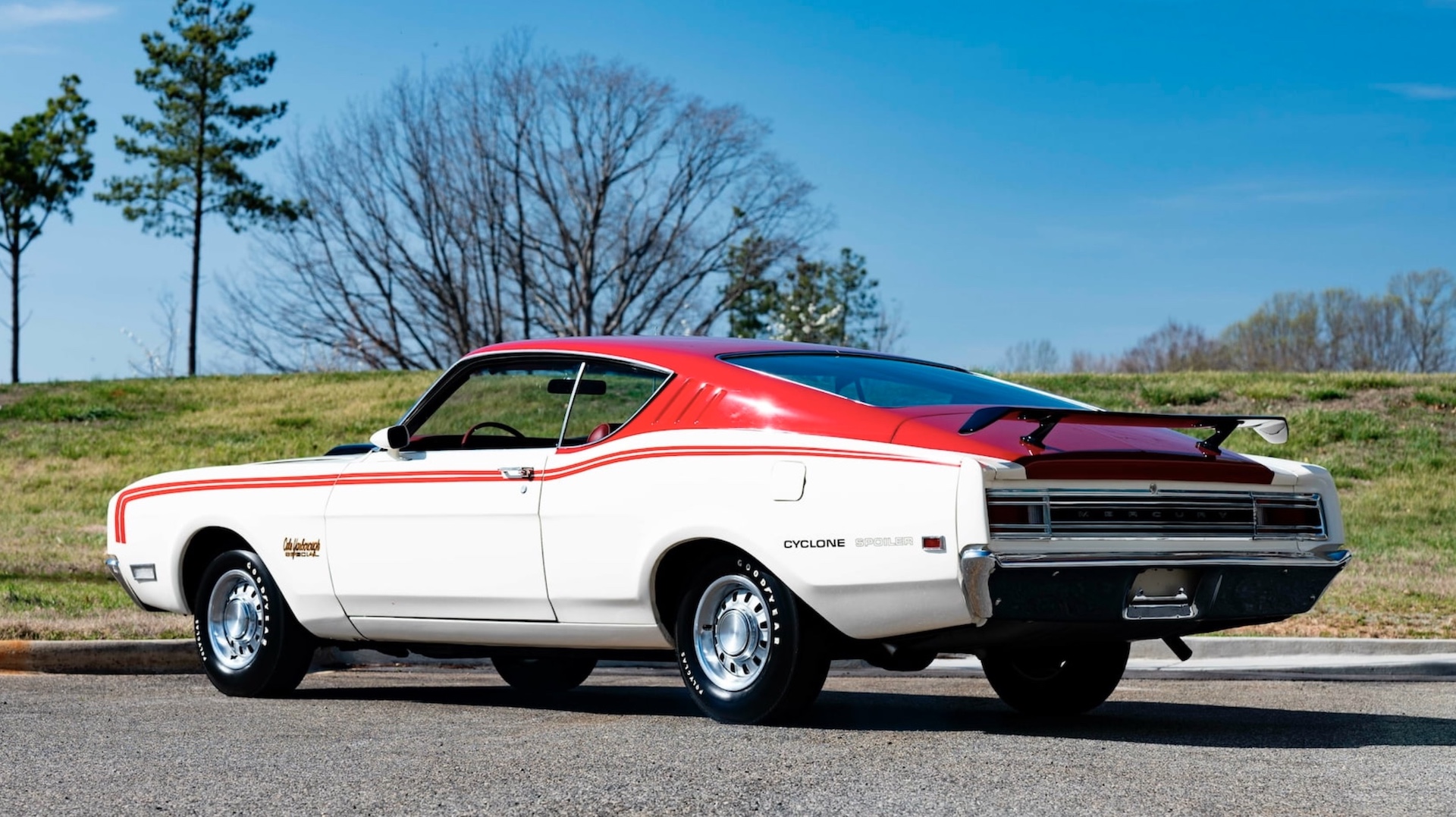 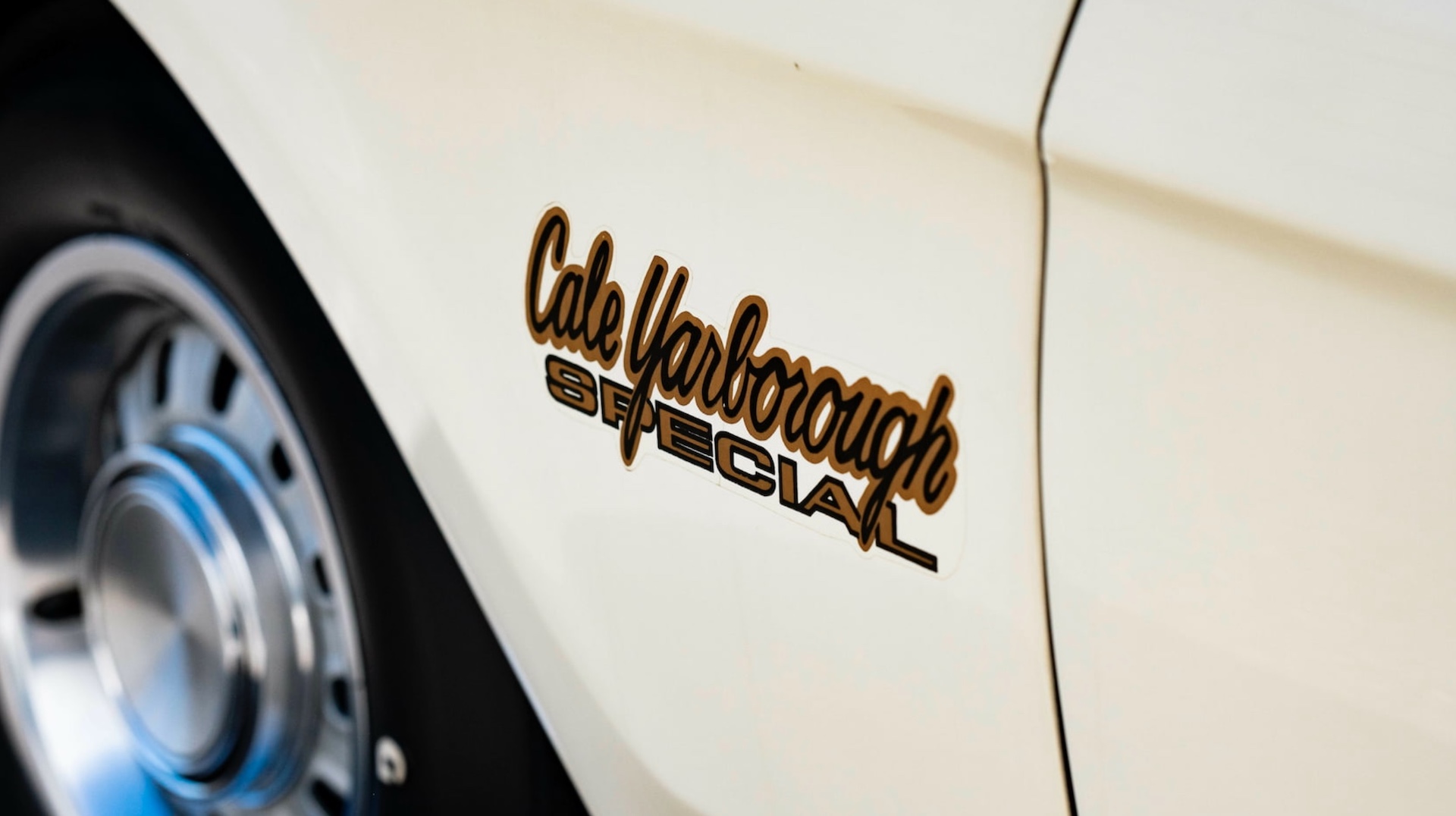 According to the Talladega Spoiler Registry, the Mercury gained an additional 4 in (102 mm) of fender on top of the already significant extra length Ford added to the Torino. The angle of the nose was also different, those two changes allegedly making the Mercury between 2-8 mph (3-13 km/h) faster on the track. Spoiler IIs also got a small real spoiler for the street, that neither the Talladega or the racing Mercurys used, and in case you were wondering about that II suffix, Mercury also offered a Spoiler (no “II”) with the regular Cyclone’s unextended snout. 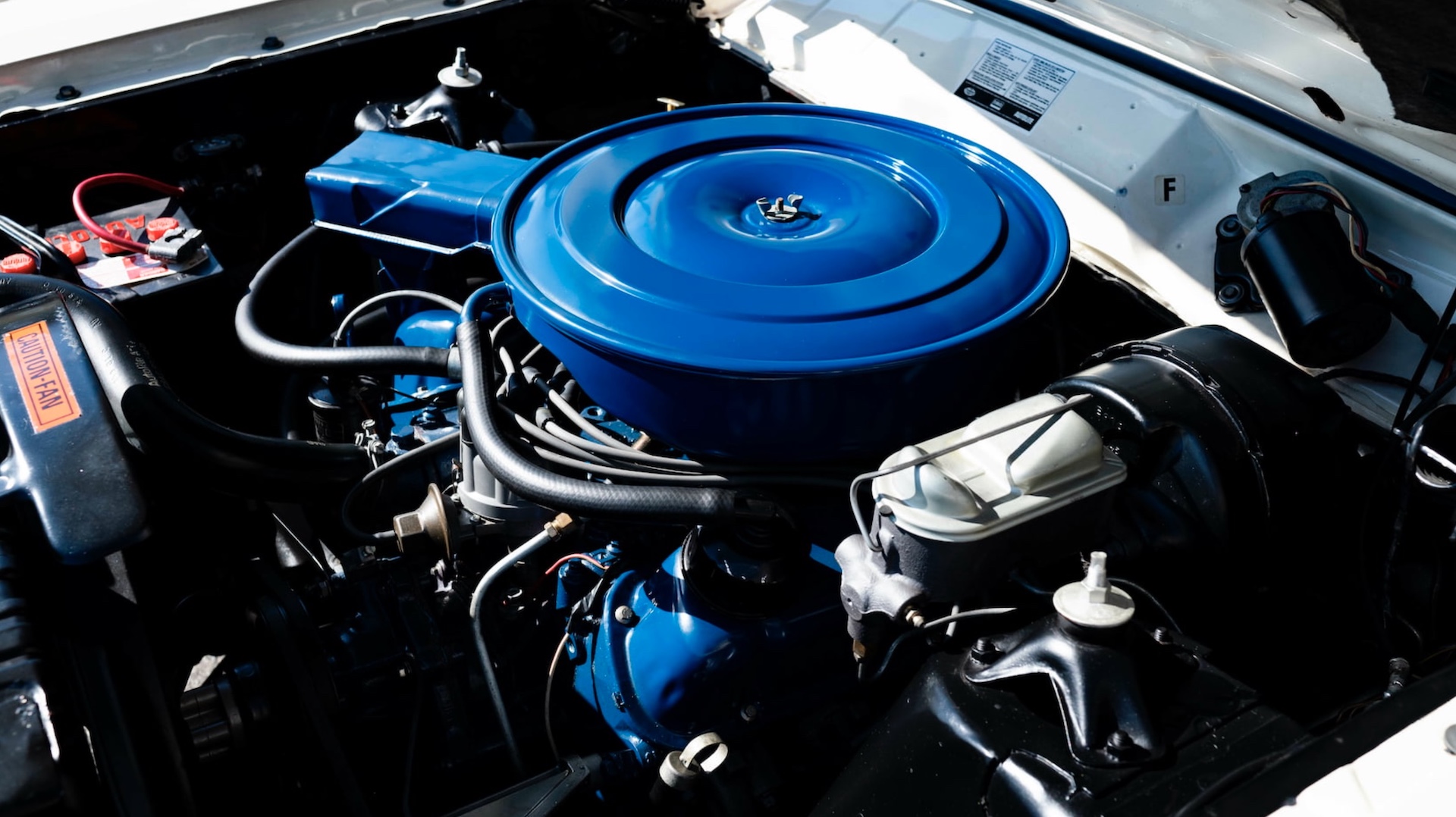 Both cars got the Boss 429 engine in competition guise, but while street Talladegas came only with the 428 V8, Mercury chose to make the milder 290 hp (294 PS), 351 cu-in (5.8-liter) small-block V8 290 hp also found in Mustangs the standard mill. Like Ford, Mercury was obligated to build 500 cars, but like Dodge it managed not to. Production figures suggest that only 351 of the 503 cars built were Spoiler II variants with the NASCAR nose.

Related: NASCAR Could Transition To Hybrid Powertrains In 2024 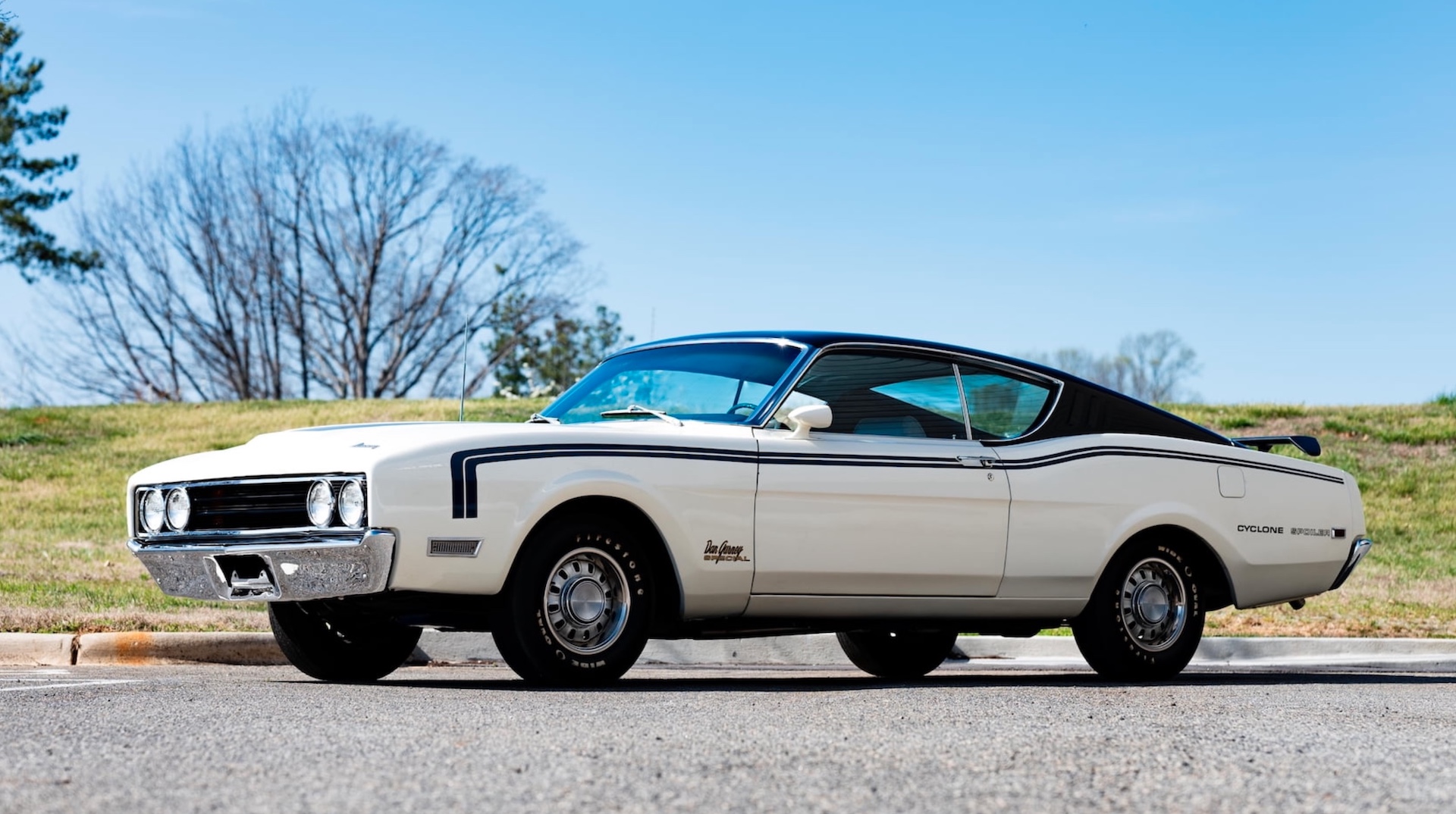 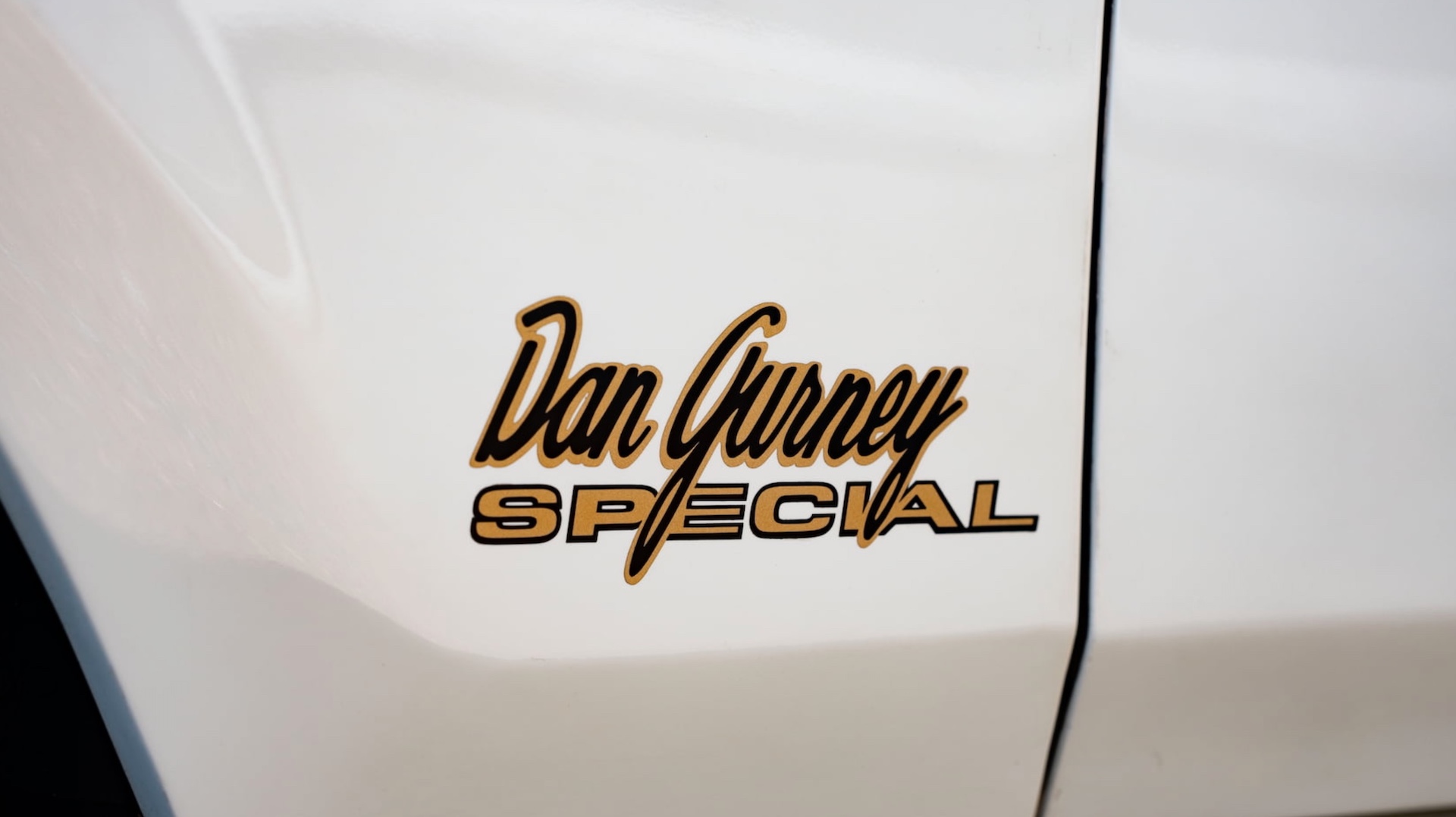 Of those, the Talladega Spoiler Registry says 199 were Cale Yarborough special editions with blue stripes, and 152 were red-striped Dan Gurney cars, yet you’ll find one of each at Mecum’s May sale, both carrying $65,000-85,000 estimates. 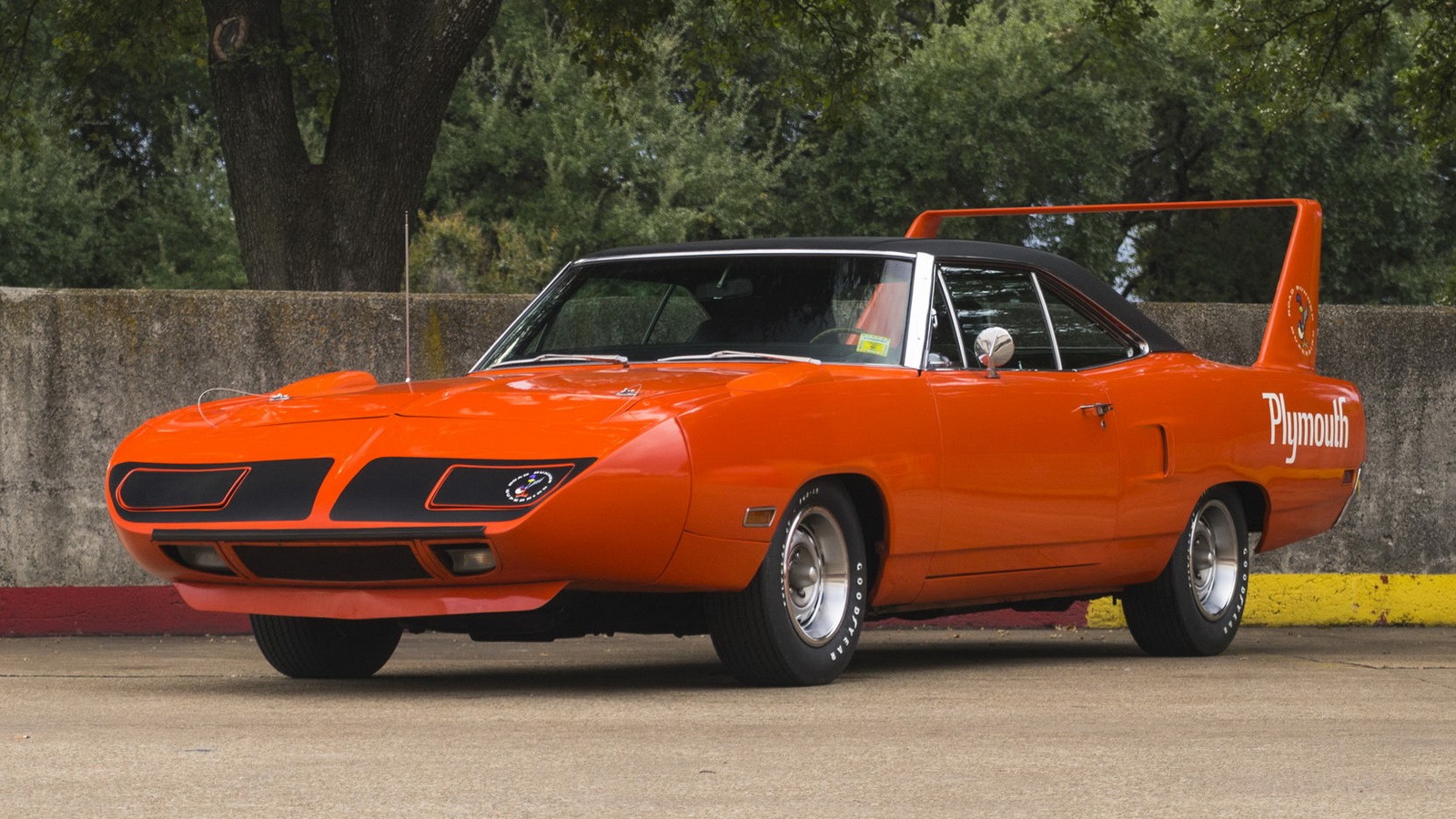 Ford’s Torino Talladega, with help from its Mercury Cyclone Spoiler II sibling, brought the ’69 Nascar crown to Uncle Henry, but Ford knew the 1970 season was going to be a whole lot tougher. The Dodge Charger Daytona had arrived too late in the 1969 season to prevent Ford from winning, but it had proved its worth with several wins and become the first stock car to lap at more than 200 mph (322 km/h). By coincidence, that very car is also for sale at Mecum’s Indy event. The Daytona would compete again in 1970, but this time it would be joined by the similar Plymouth Superbird (pictured above), one of which would be driven by Richard Petty, who’d been lured back to Chrysler. 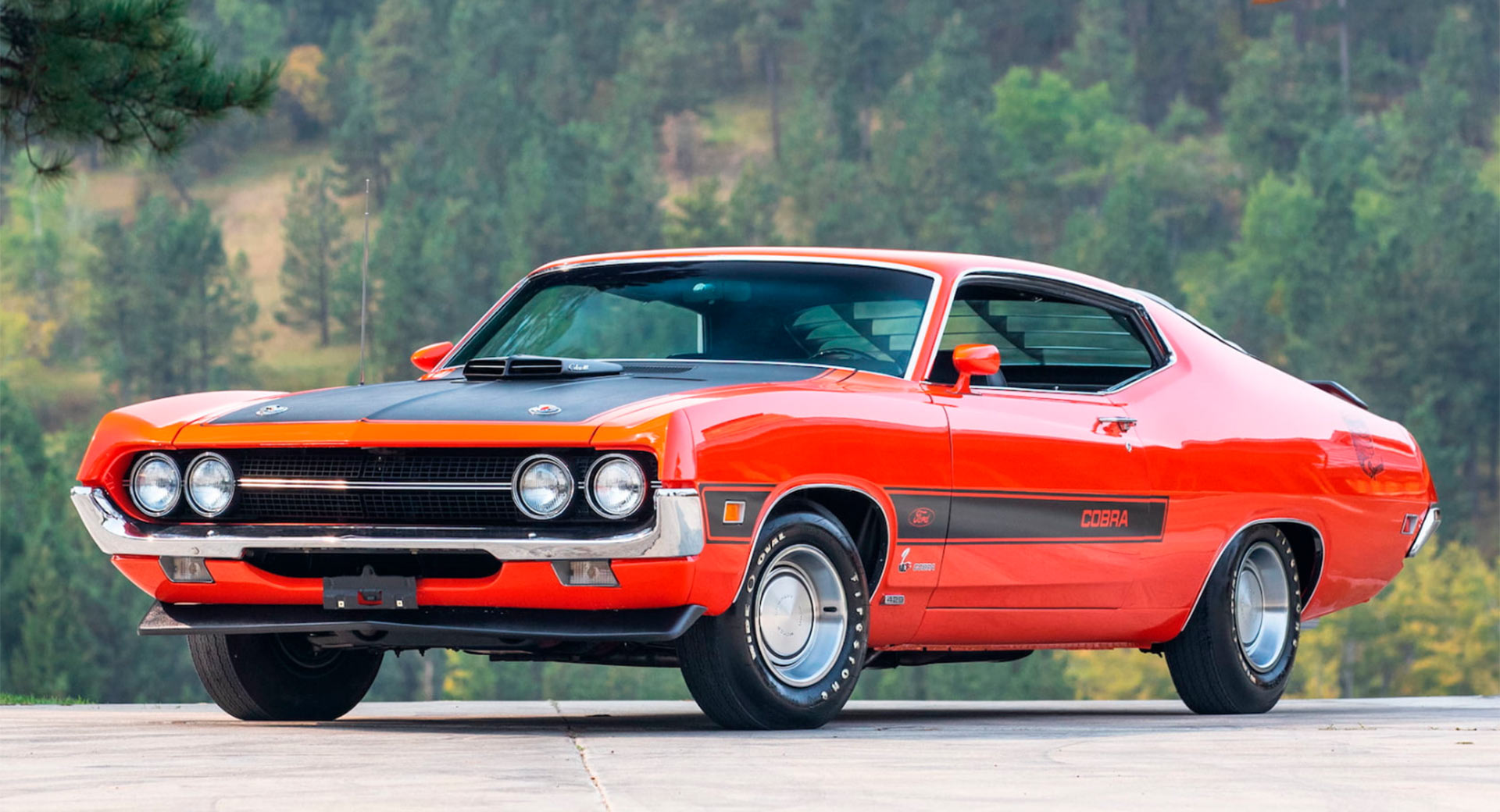 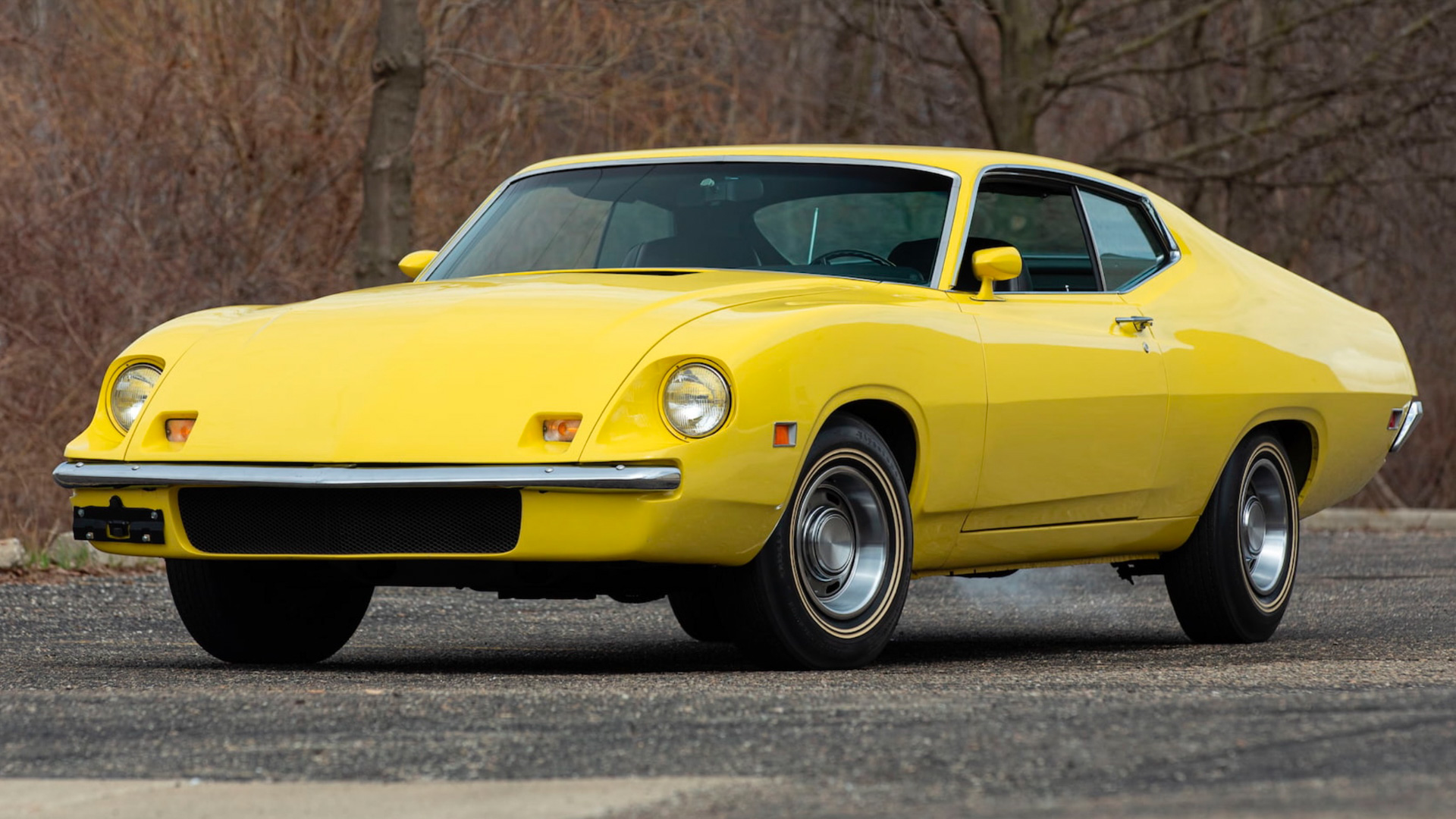 Ford needed to do something drastic. The street Torino was new for 1970 (upper picture), but rather than graft a simple aero nosecone onto the ends of the existing fenders, Ford created an entirely new front end that wouldn’t have looked out of place on a fancy Italian GT. The slippery snout allowed the prototype Torino King Cobras to pass 200 mph in testing, but without a rear wing to keep the tail planted, the car was unstable at high speed. Sadly, Ford scrapped the program, reverting to the older Talladegas and Spoiler IIs for the 1970 season, which it lost to Chrysler. 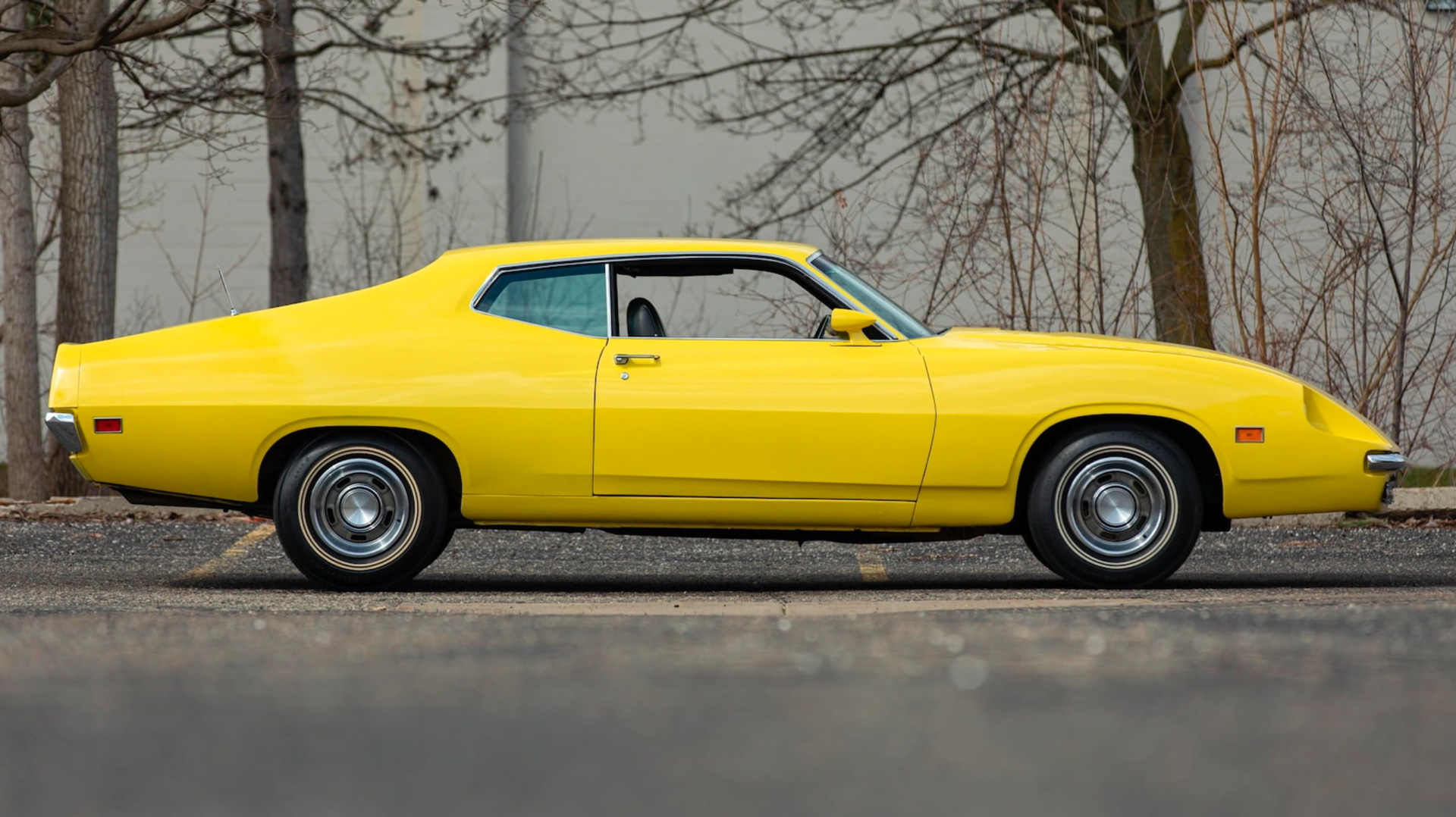 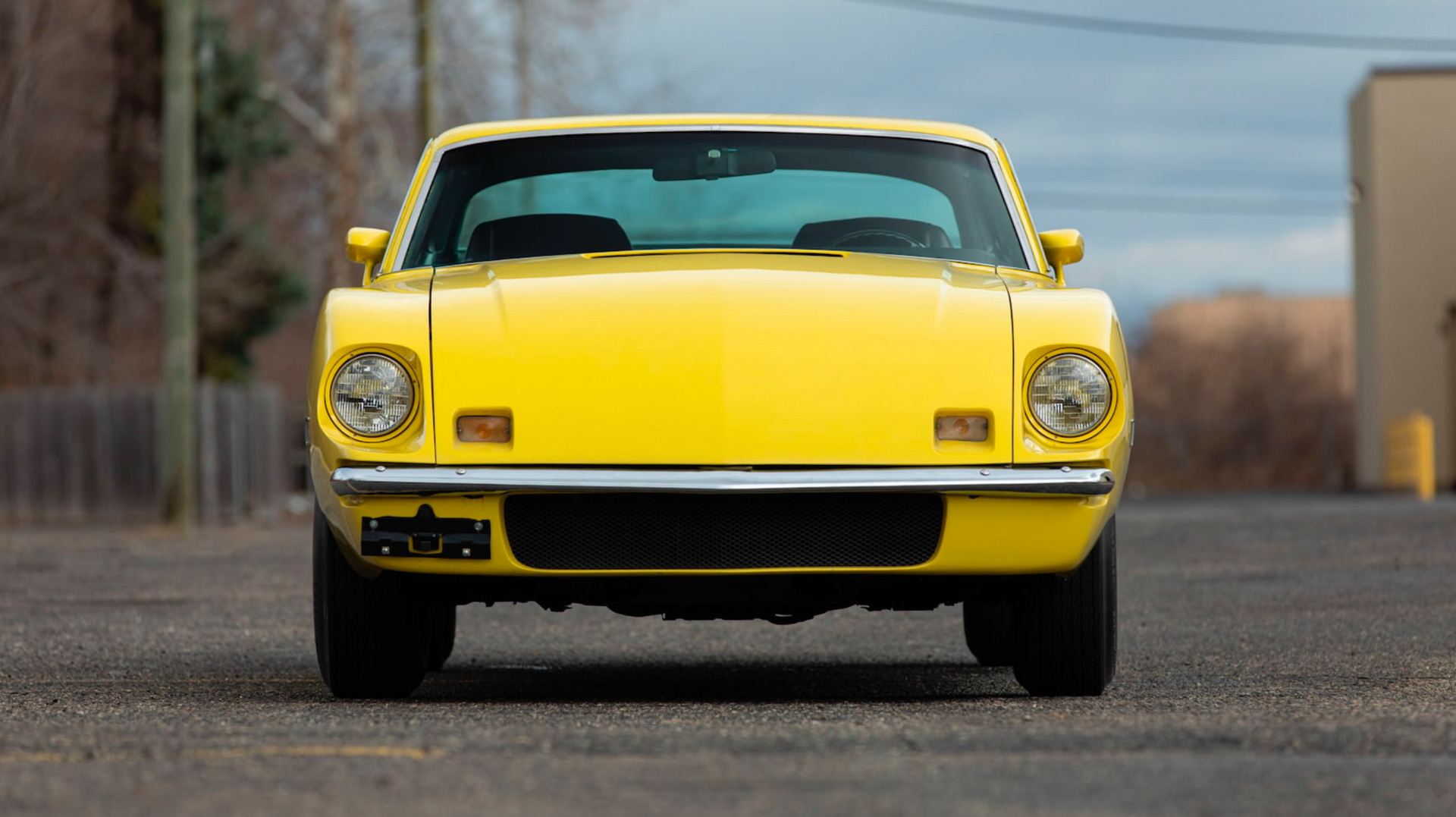 Three Torino King Cobra prototypes are known to exist today, plus a 1970 Mercury Cyclone Spoiler II which was given the same treatment. One of those Torinos is up for grabs at Mecum’s Indy 2022 sale, and it’s in incredible condition, having covered only 837 miles since new. Fitted with a non-Boss 429 Cobra Jet V8 rated at 370 hp (375 PS) and backed by a three-speed automatic, it was bought by NASCAR team owner Bud Moore in 1971 after he spotted it languishing unloved in a Ford facility and exists today as a reminder of what might have been. Mecum estimates it will fetch $400,000-500,000.

The end of the aero cars

NASCAR rule changes for 1971 effectively ended the reign of the aero cars. Series boss Bill France Sr. didn’t officially outlaw wings and nose cones that year, but a new rule limiting cars running them to 305 cu-in (5.0-liter) engines was as good as a ban. And by the mid 1970s all cars were obliged to run engines smaller than 358 cu-in (5.9-liters). But for a brief period between 1969 and 1970 when the big motors and even bigger wings were let loose on America’s speedways, the only things crazier than the cars were the guys brave enough to drive them.

If you want to create an instant aero collection and are as rich as a real NASCAR driver, check out Mecum‘s Indy sale where you’ll find all of the cars pictured, plus no less than four Plymouth Superbirds. Yeah, four. That Superbird always has to dominate the conversation, doesn’t it?