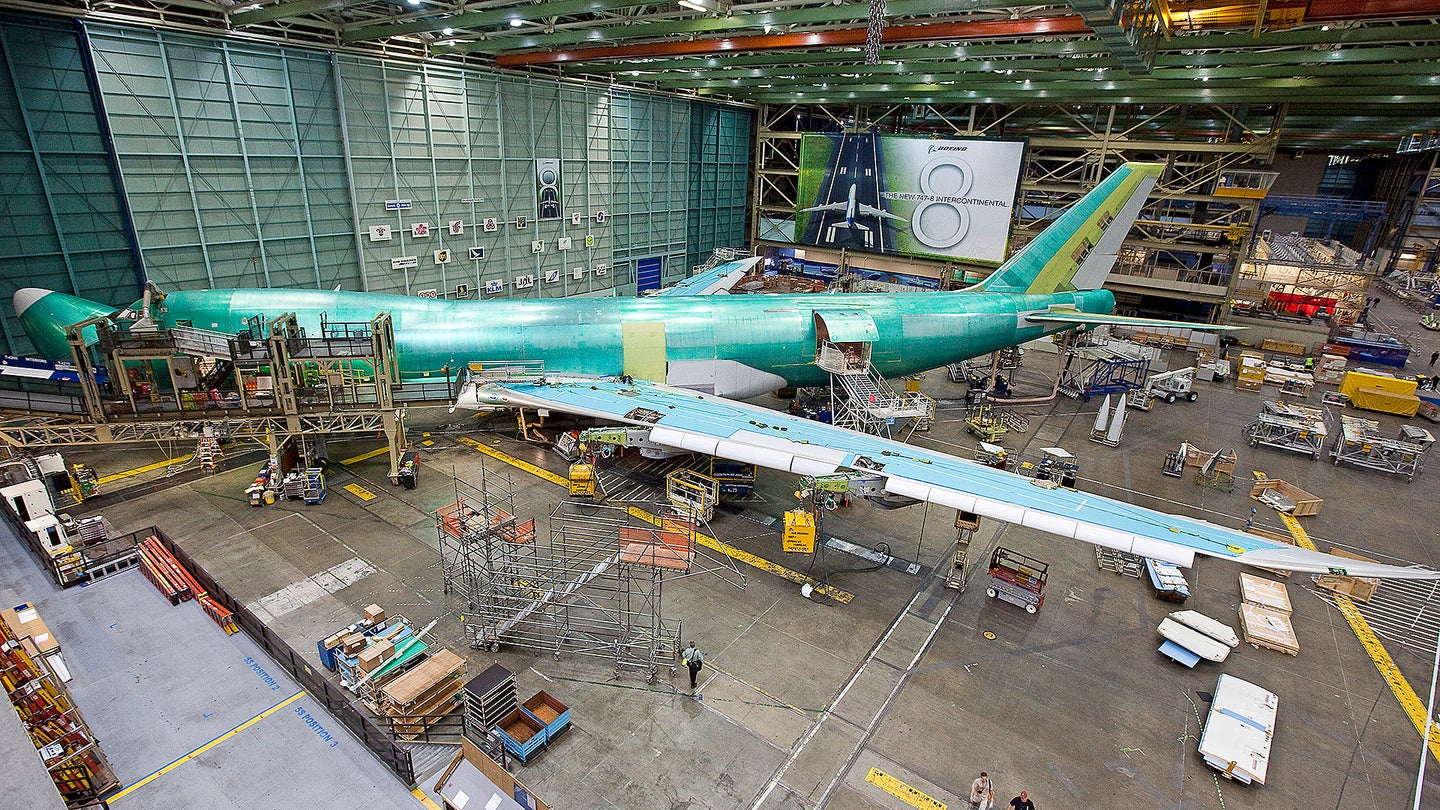 After more than half a century in production, the last example of Boeing’s 747 ‘Jumbo Jet,’ the iconic airliner that brought long-range wide-body air travel to the world, has rolled off the production line. With the closure of the production line for the ‘Queen of the Skies,’ the era of the four-engine airliner also ends, with Boeing and rival Airbus now having fully transitioned to twin-engine wide-body airliner families.

The last Model 747, the 1,574th to be completed, will emerge from Boeing’s Everett, Washington, facility today. The aircraft will be test flown by the manufacturer before being painted and delivered to its customer, the cargo and charter carrier Atlas Air, early next year.

“It’s a very surreal time, obviously,” Kim Smith, vice president and general manager of Boeing’s 747 and 767 programs told the CNBC news channel. “For the first time in well over 50 years, we will not have a 747 in this facility.”

The 747 program began life in the late 1960s when a Boeing team dubbed “the Incredibles” were responsible for developing what was then the largest civilian aircraft in the world in a space of only around 16 months.

Prompted by its failure to provide a new heavy-lift military transport for the U.S. Air Force (following the C-X competition won by the Lockheed C-5 Galaxy), Boeing switched its attention to the commercial market. With global trends that predicted increasing airline passenger numbers, falling airfare costs, and growing pressures on airport hubs, the Seattle-based plane-maker designed the 747 around the high-bypass turbofan engine technology developed for the C-X program.

While the 747 is today one of the most familiar sights in the skies, it’s hard to imagine the degree to which it broke new ground when it was first rolled out in September 1968.

Building the Jumbo Jet required the construction of a giant new assembly hall in Everett. Measuring 200 million cubic feet, and in use to this day, Boeing claims this is still the largest building in the world by volume.

As for the 747, this originally measured 225 feet in length, with the top of the tail fin as high as a six-story building, and total weight in the region of 735,000 pounds. Its wing area was larger than a basketball court and its capacious fuselage was pressurized with a ton of air. Depending on the configuration, a 747 could carry between 374 and 490 passengers, plus flight and cabin crew. At the same time, the aircraft made use of technologies that were, for their time, cutting edge, including advanced navigation systems.

Of course, the dramatic impact of the 747 was set off on style by its upper deck, a first for a mass-production jetliner, leading to its distinctive humped appearance. Entered via a flight of stairs and providing an exclusive space for a select few passengers, securing a seat on the upper deck soon became something of a holy grail for airline passengers.

The final major production variant was the 747-8 launched in 2005. The passenger-configured 747-8 Intercontinental and the 747-8 Freighter both introduced advanced technologies that were lifted from the 787 Dreamliner, including General Electric GEnx-2B engines and raked wingtips. The result was a Jumbo fit for the 21st century, offering reduced noise signature, lower carbon emissions, reduced weight, less fuel consumption, and easier maintenance.

Less successful was the 747SP, for Special Performance, a short-fuselage version first flown in 1975. Retaining the upper deck on a radically shortened fuselage, only 45 examples were built. However, the unique attributes of the SP mean it remains in exclusive use to this day as a luxurious VIP transport, as well as a testbed, and as the National Aeronautics and Space Administration’s (NASA) Stratospheric Observatory for Infrared Astronomy, or SOFIA, a kind of flying telescope.

As well as becoming the choice of airlines around the world for high-density long-haul routes, the 747 also carved a niche in specialized governmental and military roles.

The NASA modified a pair of 747-100s to become Shuttle Carrier Aircraft, hauling the orbiters around on the top of their fuselages.

Perhaps even more well-known are the two 747-200Bs that were modified in 1990 to serve as VC-25A Air Force One presidential transport aircraft, replacing the long-serving VC-137 in this role. These aircraft are also considered the most expensive aircraft on Earth to fly — with a per-hour flight cost that has, at times, exceeded $200,000.

Less successful was the YAL-1 Air Force’s Airborne Laser (ABL) program, which took a 747-400 Freighter and added a nose-mounted laser weapon intended to destroy ballistic missiles in their boost phase of flight. Despite destroying a ballistic missile off the coast of Southern California in a 2010 test, the program was canceled the following year.

Other bizarre variants of the Jumbo include the Dreamlifter, a highly modified 747-400 to ferry the larger composite structures used in the production of the 787. The already enormous fuselage cargo was further increased in size, with components loaded and unloaded via a hinged rear fuselage.

However, the introduction of the Dreamliner, and the 777 before it, would be accompanied by a step-change in airline operations.

For long, the 747 had capitalized on its ‘biggest is best’ mantra, but by the beginning of the 21st century, operators were looking for fuel efficiency and overall economy, rather than simply moving the largest number of passengers over the longest distances — and, at the same time, being restricted to larger airport hubs.

Such jumbo jets are intended to funnel passengers through hub airports, but travelers often seek shorter routes with nonstop flights.

In the process, airlines have fallen out of love with big four-engine jets like the 747 and the Airbus A380 and have instead many have begun to standardize on twin-engine aircraft.

The 747 will remain a familiar sight around the world for some time to come, though, in steadily diminishing numbers and in the liveries of less-familiar operators. While the more recent aircraft still have many thousands of potential flying hours left, the Jumbo is now no longer flown by national flag-carriers like Qantas and British Airways, and United and Delta gave up their last 747s even before the COVID pandemic slammed the airlines.

As for the U.S. Air Force, it still awaits its two 747s that will serve as the new VC-25B Air Force Ones, under the Presidential Airlift Recapitalization (PAR) program that has suffered from delays and cost overruns. The aircraft chosen for modification to VC-25B standard are not new-build airframes but are being converted from a pair of 747-8 Intercontinental jets originally built for a now-defunct Russian airline.

Beyond the new Air Force One, there remains a strong possibility that the Air Force will also select a 747-based solution for its Survivable Airborne Operations Center program, which will replace its aging fleet of four E-4B Nightwatch aircraft. Based on 747-200B airframes, these are also known as National Airborne Operations Centers, or NAOCs. While the overall requirements for SAOC are classified, we do know that the service is looking for an aircraft with a similar size and general layout, including four engines, which would seem to rule out anything other than another 747. You can read our previous report on this revelation here.

With the 747 now officially out of production, those aircraft would have to be converted from existing, second-hand examples.

With all this in mind, the future for the 747 in military service, at least, looks like it may well be secure for a very long time to come.

The post The Last 747 Ever Built Has Rolled Off Boeing’s Production Line appeared first on The Drive.