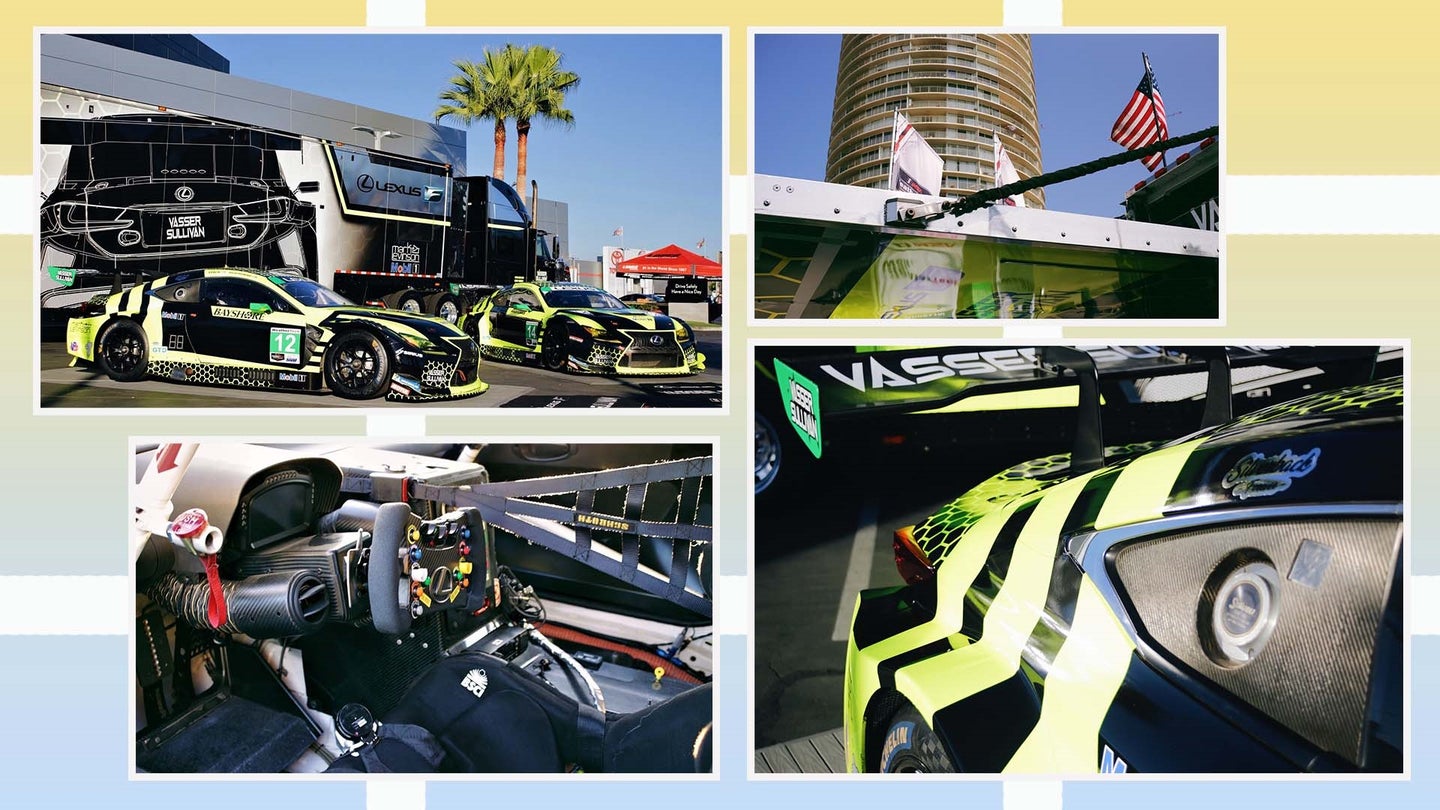 I’ve always loved grand touring and touring car racing. The cars look a lot like their everyday street-going variants, and my golden rule of All Cars Look Better As Race Cars applies extensively. What enthusiast wouldn’t dig lower, more aggressive-looking versions of the Aston Martin Vantage, Porsche 911, BMW M4, or Hyundai Veloster N? That line between purpose-built race car and civilian fare gets murkier in more modified and faster classes, but the Lexus RC F GT3 maintains an interesting blend of the two.

The Lexus RC F in GT Daytona (GTD) spec is essentially the International Motor Sports Association’s (IMSA) version of the internationally recognized GT3 class. In my opinion, the street car, with its wild bodywork, low stance, and wide proportions, looks more race-car-like than a lot of other cars in this big-power sports car class. On the flipside, the race car looks a lot like the street version, save for the gigantic slick tires, center-lock wheels, added venting and aerodynamic bits, and big wing.

These features make it a perfect candidate for a comparison. Follow along as we parse the differences between the normal RC F and the race car.

Full disclosure: Lexus invited me to the 2021 Long Beach Grand Prix as one of its media guests. The company paid for my entry and parking, and gave me access to its race paddock and VIP suite.

It should be said that GT Daytona (GTD) has pretty minimal requirements for mirroring the street car. The RC F must retain its engine up front and drive wheels out back, and the base chassis must not be modified, but everything else seems to be up in the air. Almost all of the GT3’s bodywork is carbon fiber, so that instantly changes the look and feel of the car. It’s also 4.7 inches shorter, weighs around 1,000 pounds less than its 3,958-pound street weight depending on balance of performance (more on that later), and it’s overall length is five inches shorter. Though, it does have the same 107.5-inch wheelbase as the street car. For safety and proper race tuning, it features an extensive roll cage, netting and harness, fire suppression system, and racing electronics.

The differences continue when you start to look underneath the GT3’s wheel arches, and I spoke to Vasser Sullivan’s team manager Greg Cates to better understand what all was going on. “It’s a double wishbone suspension, front and rear,” Cates said about its four-wheel independent suspension. The street car, in contrast, has double wishbone suspension up front and a multi-link design out back. He then noted that the race car possesses four-way adjustable coilovers by Öhlins, a Swedish company that’s world renowned for its quality racing and street suspension products.

The naturally aspirated V8 under the massive carbon fiber hood was also based on the consumer car, but the changes make a significant difference. “It’s based on the [factory] block, but the oil pan is removed and instead has a dry sump,” Cates said of the RC F’s 5.0-liter 2UR-GSE V8 engine. “That’s a big thing about it.”

A dry-sump system has a small oil reservoir, typically higher up in the engine, and a pressurized system that’s always moving oil throughout the engine. It’s more efficient and does a better job than a conventional oil-pan-based system at preventing oil starvation under high-G-force motorsports scenarios. The race-spec 2UR-GSE engine has also been punched out to 5.4 liters in race spec, with more than 500 horsepower as opposed to the street car’s 467.

The engine and drivetrain also hold some interesting differences in regards to how they are situated in the chassis to improve weight balance and handling. The engine is still up front, but that doesn’t mean that other stuff can’t be shifted aft.

“It’s an X-Trac 6-speed sequential gearbox, and it’s in the back with the clutch, bellhousing, and alternator, it’s all in the back,” Cates said, noting the transaxle with the transmission and rear differential combined. “It being a front-engine car, you obviously want to move as much weight to the back as you can to get better balance.” This is significantly different from the street car, which has its 8-speed conventional automatic gearbox up front directly behind the engine, followed by a normal driveshaft routing power to a differential out back.

Earlier I mentioned the term “balance of performance,” commonly referred to as BOP. To boil this down to a quick definition, BOP is when officials determine each car’s fairest power-to-weight ratio within respective classes. Ideally, it keeps the racing close, entertaining, and fair. How that BOP is handled is up to the teams.

“As a team, you’re always going to want a better balance of performance for your car,” Cates said. “I think they [IMSA] have done a pretty good job. I think right now we’re a little heavy. Every car fights their own battle, ours is tire degradation in the back. BOP hurts us in more ways than just acceleration and deceleration, it makes our tires work harder in the back. So it slows us down in two ways instead of just one.”

In addition to carrying a little more weight than he’d prefer — I think it’s fair to say that all teams are of this opinion — having that weight in the back wears down the rear tires faster, which has a massive effect on a team’s strategy during races. It’s especially interesting to see in the RC F GT3’s case, because it’s engineered from the beginning to move as much of its weight farther back as possible to achieve an overall better weight balance.

“At the manufacturer level, there are meetings about it all, and you do have opportunities to say how BOP affects you and fight for your position,” Cates said. “And IMSA really does a pretty good job at it. If you watch racing, especially when all the pros are in and they’re packed up under a yellow flag, when they then get to racing, it’s all pretty tight.”

After hangin’ around the paddock a little while longer, I made my way to a part of the circuit where I could get a glimpse of and photograph some very up-close action, which was in no short supply at the Long Beach Grand Prix. It was rather cool to hear all about what makes the RC F GT3 a potent beast in IMSA GTD while standing right next to it, and then later watch it rage through the technical corners of such a legendary street circuit.

Got a tip or question for the author? Contact him directly: [email protected]

The post The Lexus RC F GT3 Differs From the Road Car in Fascinating Ways appeared first on The Drive.