The Looming Worry Of Russia Using Nuclear Weapons In Ukraine 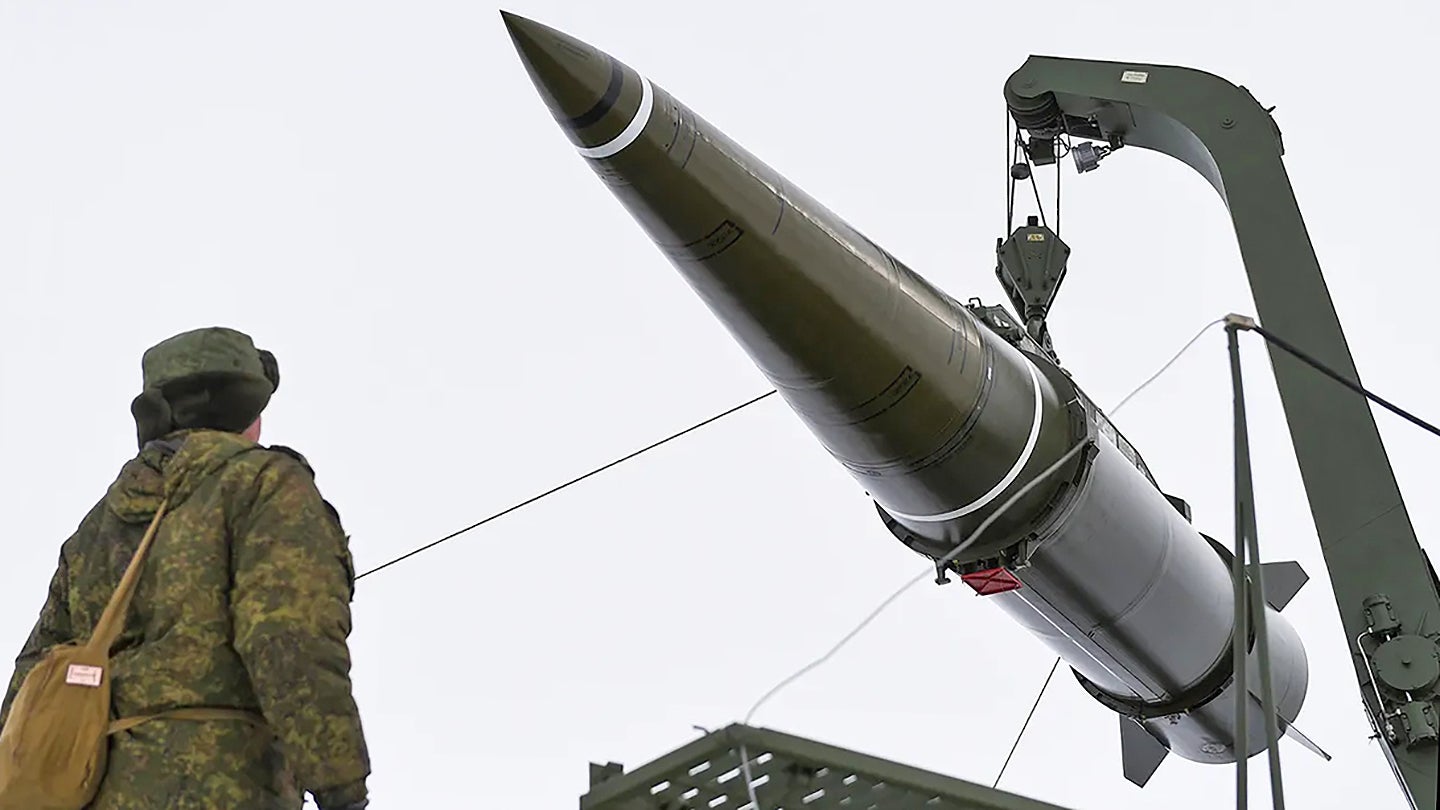 Russia’s possible use of nuclear weapons against Ukraine is something of a tortured topic. Even leading up to the now eight-month-old all-out invasion, there was no shortage of nuclear weapons talk. Some decried this as fantastical fear-mongering, while others posited that anything was possible. Now, amid fresh nuclear threats from Putin himself, and considering Russia is losing ground in its great war of choice and appears desperate for manpower in order to stave off further retreat, unfortunately, it’s time to talk about the possibility that the nuclear genie gets forced out of the bottle after 77 years.

The first question most have when it comes to nuclear weapons and the conflict in Ukraine is why would Russia nuke a country it is occupying and one that is so close to its own borders? The problem here is that most people’s perception of a nuclear strike is as some sort of massively invasive attack against multiple targets of great value, but that is not necessarily the case. This is especially true in regard to Russian combat doctrine and potential strategy in which just detonating a nuclear weapon in anger, regardless of its yield or target, can be used as a tactic to solidify gains, not land a major blow against the enemy. This concept is often referred to as ‘escalate to de-escalate.’ Although we have talked about it many times in the past, it’s time we look at it in terms of the current circumstances in Ukraine.

Escalate to de-escalate would be used to basically freeze the conflict. Here’s how it has been theorized as working in the past outside of the Ukraine context.

Basically, if Russia were to invade the Baltics, for instance, they could make rapid gains in the first days, as it would take time for NATO to respond in force with its overwhelmingly superior conventional military capabilities to a rapidly changing situation. Up to this point, a Russian blitz would remain conventional in nature. Then, after taking significant territory during its initial push, and as NATO’s response was coalescing, Russia would set off a tactical nuclear weapon. This could be a low-yield device resulting in very minimal radiological fallout, such as an above-ground detonation on say a largely vacated airbase or even in an uninhabited area beyond its lines. There could be little to no resulting loss of life, materiel, or critical infrastructure, as that is specifically not the objective. The hope would be that just the demonstration of such an unprecedented use of nuclear arms would immediately escalate the conflict to a point where the risk of further escalation is so severe, so dark in nature, that it would force the enemy to the negotiating table.

In doing so, it would freeze the conflict, even if temporarily. This would give Russia time to fortify its defenses and solidify its territorial gains while bargaining to legitimize those gains or risk further escalation. In retrospect, seeing how rickety Russia’s logistics have been in Ukraine, it is clear how critical freezing a conflict after an initial phase could be.

So, basically, by saying ‘look, we are willing to go there,’ Russia would be betting that NATO will not escalate the situation further as the cost would be far greater than allowing Russia to temporarily — at least when it comes to messaging — retain the gains it has made while urgent talks can occur in an attempt to de-escalate the situation. Of course, Russia would have no intentions of giving back what it has stolen, and, at least from Moscow’s point of view, they would have been able to make great gains without facing the brunt of NATO’s conventional forces, which could spell doom for Russia’s conventional fighting force. In essence, they would ‘live to fight another day,’ and with the advantage of doing so at a time of their choice and from new territory. Once again, this, theoretically, could all occur while also not getting into an apocalyptic nuclear exchange in which everyone loses horrifically.

It’s a very risky and guileful strategy that says more about Russia’s wanting conventional fighting capabilities than it does about its nuclear capabilities.

This is not just some academic exercise, either, Russia trains to employ similar tactics with so-called ‘battlefield’ nuclear weapons during drills and wargaming. And while it seemed quite fantastical eight months ago when Russian forces streamed into Ukraine and quickly advanced on wide swathes of territory, what has come after is turning out to potentially be a miserable military failure of historic proportions.

Even months after Russia significantly truncated its goals for its ‘special military operation’ months ago, pivoting concentration on the south and east of Ukraine, Moscow is losing ground, its forces are battered, depleted, and humiliated, and Ukraine is on the offensive and becoming better armed with each passing day. Kyiv’s arsenal now includes many of those conventional NATO weapons, along with superior training, that Russia feared badly enough to even make escalate to de-escalate a potential card to play in the first place. These factors make it more likely that Russia could attempt to introduce nuclear arms into the conflict, even just in an attempt to keep from being totally routed.

There also appears to be strategic maneuvering going on that could be used in a flimsy attempt to ‘justify’ such an act by the Kremlin. Russia’s sham referendums in the occupied or otherwise seized regions of Donetsk, Lugansk, Kherson, and Zaporizhzhia will make these areas ‘Russian territory,’ although pretty much only the Russian government will recognize it as such. What that does though is it gives authorities in Russia a pretext, albeit an outright phony one, to ‘defend’ these areas as if they were its own soil.

Kyiv’s repeatedly stated goal is to regain these territories, along with Crimea — Russia’s top prize. Those goals are more realistic now that Ukraine’s forces are on the offensive and advanced arms are pouring in. Losing these areas, and especially long-held Lugansk and Donetsk, and above all else Crimea, would be a massive blow to Moscow — basically acting as a complete repudiation of Putin’s designs since the invasion of Crimea in 2014. Even if it kept Crimea, Russia’s vaunted ‘land bridge’ between its borders and that peninsula, which came as a result of the February 24th invasion, would be lost.

Once the referendums ‘pass,’ Putin can declare he had no choice but defend Russian lands at all cost, especially if his conventional forces crumble.

And of course, winter is also coming. Fighting on foreign soil under those conditions will be worse than what Russian forces previously experienced. Logistics will also be more challenging. Add in low morale, thousands of resentful and untrained conscripts incoming, and worn-out or destroyed equipment with adequate replacements in short supply, and further disaster is likely on the horizon.

So, if Ukrainian forces continue to make substantial gains, it is not hard to see how the use of a nuclear weapon to freeze the conflict is within the realm of possibility. This is especially so now, in a post-mobilization reality, when Russia could become desperate just to try and keep what it has left in terms of occupied territory.

This does not preclude Russia from using nuclear weapons in greater numbers on major military and even civilian targets in Ukraine, either. A launch of multiple devastating strikes by Russia in an attempt to force capitulation isn’t an impossibility, especially after what we have seen Russian forces do to major population centers using conventional artillery. But that would be much riskier than executing a signaling strike aimed at freezing the conflict. Striking outside of Ukraine, as has been suggested by Russian hawks, would be another level of risk entirely.

Still, we are in uncharted territory, and exactly how far Putin could double down on an already terrible string of decisions is unknown and the recent history of this conflict is not encouraging in that regard, either.

All that being said, what would happen if we woke up tomorrow morning and hear a nuclear weapon was detonated in a Ukrainian farmer’s field?

While Russia’s hopes for a quick freeze to the fighting for de-escalation talks, NATO could respond to nuclear weapons use conventionally. Basically, this would be calling the Kremlin’s bluff without escalating with retaliatory nuclear strikes. This is a very high-risk proposition, too, but one that is certainly being eyed, even if it is paired with de-escalation talks, or at least the offer of them.

Such a kinetic response could be focused only on Russian targets within Ukraine. At the least, this could include hitting critical targets with standoff weapons without risking NATO troops’ lives in the operation. But, it could also go farther, such as establishing a no-fly-zone over the country and then striking Russian military targets deployed there using manned and unmanned airpower. This would immediately broaden the conflict — which NATO has tried to avoid at all costs — with the alliance’s forces now fighting actively on behalf of Ukraine in the skies over the country. But, once again, this would fall far short of a nuclear response and Russia’s army would not last long in the face of NATO airpower driven by levels of battlefield intelligence never seen in an active conflict of this nature. Basically, such a move could castrate Russia’s conventional fighting force in Ukraine in relatively quick order. Non-kinetic weaponry would also likely come into play, including breaking out the heavy cyber weaponry, with attacks on Russia’s critical warfighting infrastructure and capabilities, and possibly more.

Once again, even a conventional response is laden with extreme risk of escalation though, and can quickly spin out into a much wider conflict on multiple fronts, including one that morphs into a nuclear exchange. Also, some would say doing so only leaves Russia with a greater incentive to further travel down the road to nuclear war, as its conventional forces would be devastated. This thinking goes along with ominous talk of backing ‘the bear’ into a corner. But some could say that not responding military and moving directly to negotiations could give Russia exactly what it was hoping to receive by detonating a nuclear weapon.

There are nuclear response options as well, of course, including the use of similar ‘tactical’ nuclear weapons, but this would have to occur within Russia’s actual borders and it is a very quick climb up the escalation ladder from there.

So, you see how complicated such a situation becomes and how risky every subsequent decision is in terms of escalation. There are simply no higher stakes as a major nuclear exchange will end life on earth as we know it for all mankind.

None of this is to say that the use of a nuclear weapon is inevitable in any way, of course. Russia has other WMD options, as well. But any use of these highly destructive capabilities would likely backfire horrifically on Russia and Putin’s regime, and not just militarily, but economically and diplomatically, as well. This is especially damning considering Russia lost the war in Ukraine long ago — one could argue it did so the second its invasion was launched.

Hopefully (a massive understatement), threats will remain just that and the nuclear genie will remain in its bottle forever, but it’s hard to deny that the seal on that bottle appears to be loosening.

We will be exploring this topic further with various experts in the near future, stay tuned.

The post The Looming Worry Of Russia Using Nuclear Weapons In Ukraine appeared first on The Drive.