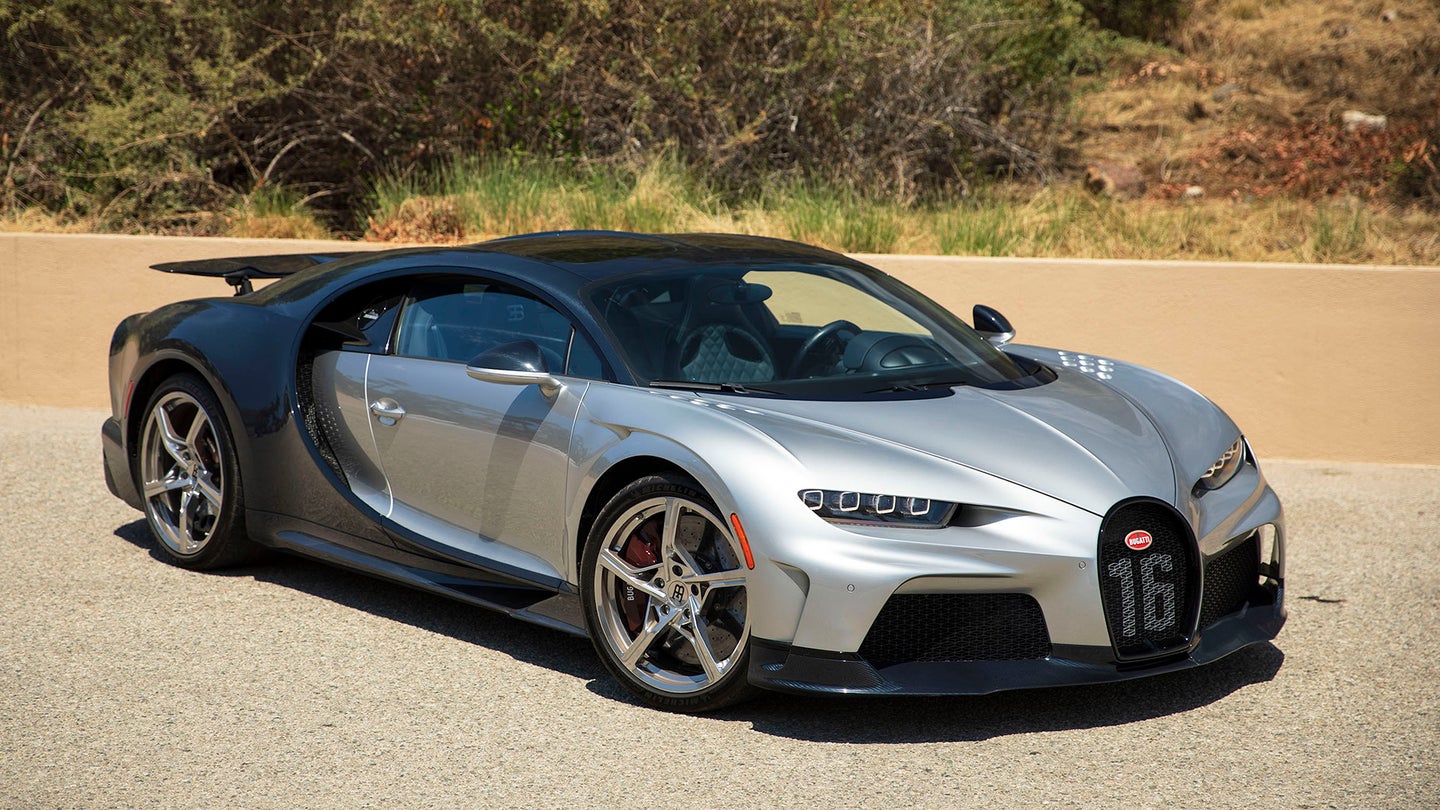 When Ferdinand Piëch assumed control of the Volkswagen Group in 1993, the company was on the brink of insolvency. Determined to right the ship, he led initiatives that drove a number of key products upmarket and was an instrumental figure in VW’s dramatic turnaround in the following years. The crown jewel of this strategy—at least from an optics standpoint—was the resurrection of the Bugatti name under Bugatti Automobiles S.A.S. in 1998, and the subsequent debut of the Veyron in 2005.

Bugatti already had a storied history in motorsport and a bonafide supercar on its resume by way of the EB 110, but the Veyron was an entirely different animal. Motivated by an 8.0-liter, quad-turbocharged W16 engine that sent nearly 1,000 horsepower to all four corners through a seven-speed dual-clutch transmission, it was capable of exceeding 250 mph and is considered by many to be the world’s first hypercar; an automotive engineering feat so significant that calling it a mere supercar wouldn’t have done it justice.

Seventeen years later, the Chiron Super Sport carries the spiritual torch that was originally ignited by the Veyron, but the automotive landscape has changed significantly over that time. Four-digit horsepower is somehow becoming relatively commonplace, and in terms of outright performance, the Chiron now has some very serious competition moving in on several different fronts—most notably from the Rimac Nevera, an EV hypercar that I also recently spent some time with. In an odd twist of fate, the Croatian automaker now also has a controlling interest in Bugatti.

But while the Chiron no longer stands above all else as the quintessential hypercar, it still makes good on the promises that the Veyron originally made. And beyond its stunning capability, it’s actually the old-school approach, and the imperfections that come with it, which continue to make this a driving experience that is without parallel.

The Chiron has always been more about hypersonic grand touring than hard-edged corner carving, but whereas the Chiron Pur Sport tipped the scales toward the latter, the Super Sport’s tuning leans in the opposite direction. Although it’s not quite as fast as the stripped-out, ultra-limited-production Chiron Super Sport 300+, the Super Sport’s performance is focused on attaining maximum velocity above all else, and that means a more streamlined, longtail-style aerodynamic package when compared to the Pur Sport.

Gone is the Pur Sport’s big rear wing, which added a significant amount of downforce for more mechanical grip at circuit speeds, but also the substantial aerodynamic drag that played a key role in the Pur Sport’s top speed of “just” 217 mph. Along with the nine air holes on each front fender, which serve as an aesthetic nod to the EB 110 Super Sport while also reducing high-speed lift, the Chiron Super Sport features a reworked rear diffuser design that’s aimed at providing enough downforce at high speeds to keep the car stable without creating unnecessary drag that would hold the car back on the top end.

The new diffuser design also necessitated a new exhaust layout. Previous Chiron models have employed a center-mounted design, but the Super Sport gets a pair of dual pipes that are spread out and vertically aligned, along with another pair of downfacing pipes that are hidden further back, which exit through cutouts in the diffuser. The changes that give the rear end of the Super Sport a distinctive look also create a deeper and richer exhaust note.

In keeping with the luxury cruise missile theme, the Super Sport also scores cushier sport seats and softer suspension tuning than the Pur Sport, and the negative camber has been dialed back from the Pur Sport’s racecar-like 2.5 degrees in order to promote high-speed stability and better road manners rather than outright handling response. The Super Sport also gets less aggressive gearing to optimize the powertrain for top-speed runs, but new turbochargers and a few engine tweaks give the Super Sport a 100-hp advantage over the Pur Sport, so the difference in acceleration below triple-digit speeds is ultimately negligible.

About a week before I drove the Super Sport, I was given the opportunity to drive the aforementioned Rimac Nevera. Outfitted with four 450-kW motors and a 120-kWh battery that together offer 1,914 hp, along with a sophisticated torque management system that ensures that all of the power gets put to good use, it’s capable of running through the quarter mile in less than 8.6 seconds. That makes the Nevera the fastest-accelerating production car ever built, and let me tell you folks, it feels like it. It is unquestionably quicker than any Chiron I’ve driven which, up until that day, was unquestionably quicker than anything else I’d ever driven.

It’s a legitimately stunning achievement, and it convinced me that EV technology inarguably has a place in the future of high-performance motoring. But while the Nevera is obscenely quick, the experience can feel like you’re asking a supercomputer to run Pong. It’s almost anticlimactic because of what a non-event it all is.

Dropping the hammer in the Chiron Super Sport, meanwhile, feels like you’ve asked it to realign the solar system. The car bucks as the gearbox downshifts, the turbos hiss and whoosh behind your head as they come to life, and the W16 lets out a baritone bellow that you can feel in your bones as you’re pressed into the seat. You can tell that it takes a symphony of mechanical processes in order to generate this kind of thrust with an internal combustion engine, and you get to be the conductor.

It feels alive, and that’s due in part because it’s inherently imperfect. The world around you starts to vibrate and blur as you lay into the throttle, and each time you do it, everything happens in a slightly different way. The Chiron Super Sport is unflappably stable regardless of pace, of course, but you’re always very much aware of just how fast you’re going because there’s so much involved in making that speed happen. Even when there’s an occasional hiccup, there’s this sense of mechanical sympathy; you understand what you did to annoy the car. It’s that imperfection that gives automobiles a human-like charm, in turn creating an emotional connection that convinces us to do things like give them pet names—something we’d never consider doing with, say, a laptop or a smartphone.

I spent a solid portion of my seat time trudging along in mid-day Malibu traffic on the Pacific Coast Highway, which the Bugatti dutifully tolerated without protest. When not driven in anger, the Chiron Super Sport can be a surprisingly comfortable place to lay down the miles, offering more relaxed road manners and better ride quality than the Pur Sport without feeling lazy or detached. Still, a brief jaunt into the hills provided a stark reminder of just how capable the Chiron is.

Beyond all the aural and visual drama is a car with a stiff carbon chassis, tons of grip, and a 16-cylinder atom bomb waiting to go off—a combination that allows it to effectively hide its 4,600-pound curb weight regardless of whether you’re pointed in a straight line or weaving through the canyons. Even if the Chiron is no longer the king of the mountain when it comes to power and acceleration, it will definitely still reset your perception of automotive performance at a moment’s notice.

As the industry collectively marches toward electrification, the Chiron as we know it is not long for this world. And like Piëch before him, Mate Rimac—another engineer turned auto exec—will lead an initiative that will modernize the Bugatti brand. It’s safe to assume that the Chiron’s successor will be even faster and more capable than this. In a vacuum, that seems impossible, given just how high the Super Sport sets the bar, but Rimac has already proven that it can be done.

Rumors suggest the new car will feature a powertrain that combines a hybrid system with a totally new, naturally aspirated internal combustion engine—a solution that could potentially provide a cocktail of what the Chiron and the Nevera have to offer today. But it also spells the end of the masterpiece that is the W16, a powerplant that was developed to showcase what was possible when the world’s greatest engineers were unencumbered by the constraints of cost and complexity. That development resulted in something that gave Bugatti’s hypercars not only world-beating performance, but also a wholly unique character.

While technology has moved into new territory in the time since, the numbers are becoming less and less meaningful as automotive performance continues its climb into the stratosphere. If Rimac hopes to create another automotive icon, it would be wise to prioritize the intangibles over the statistics.

Bradley Iger is a Los Angeles-based journalist. His work has appeared in Autoblog, Motor1, Popular Science, and Robb Report.

The post The Magic of the 2022 Bugatti Chiron Super Sport Goes Beyond Numbers appeared first on The Drive.