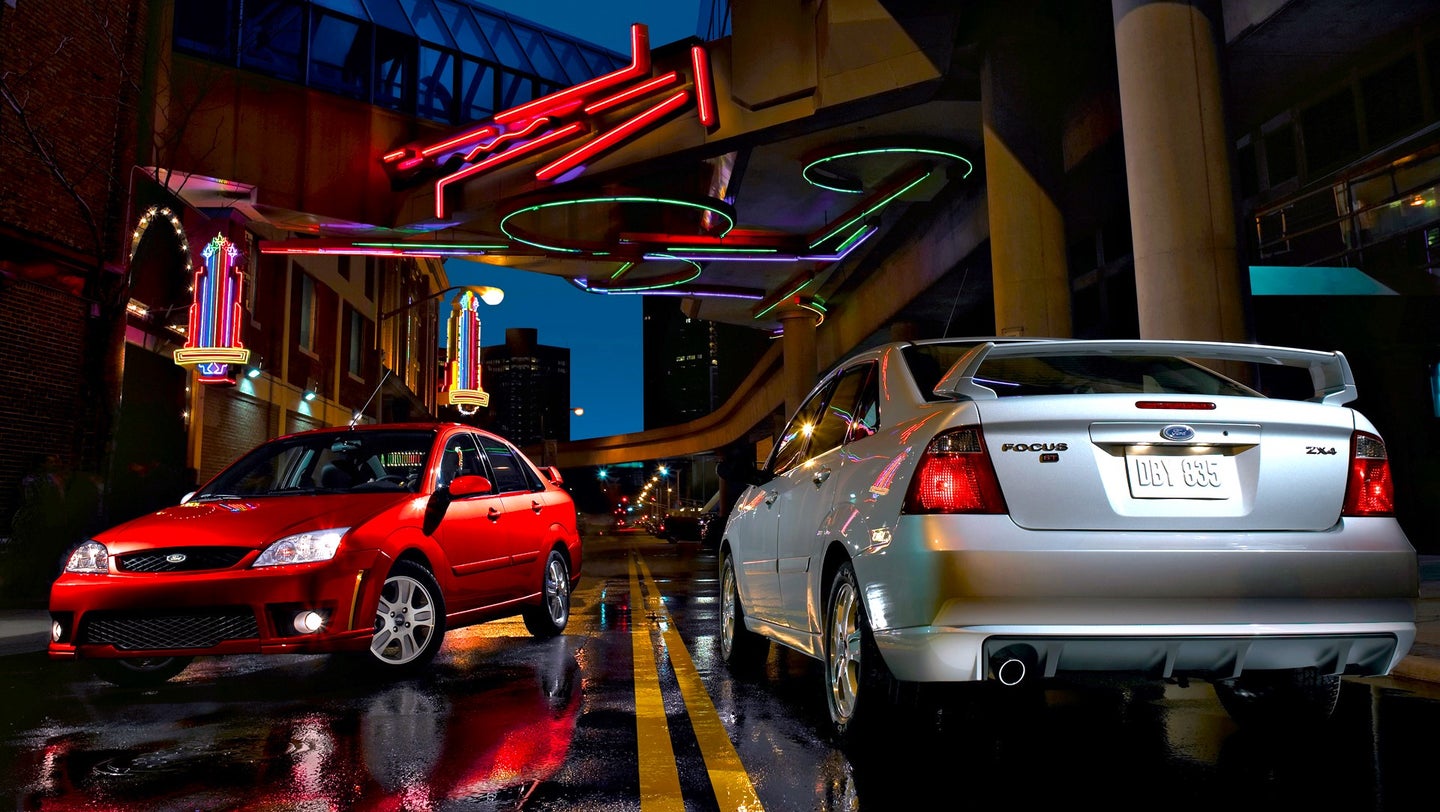 There has been some impressive factory-tuned, enthusiast-centric, front-wheel drive machinery peppered throughout Ford’s American vehicle lineups between the early ’90s and 2019. The 2019 model year was the last year the Fiesta ST was sold here in the U.S., so all we can do is wistfully gaze back at the past and peruse the usual used-car listings for decent examples of the Escort GT, Probe GT, SVT Contour, ZX2 S/R, SVT Focus, Focus ST, Fiesta ST, and all of their lesser, softer trims.

Though, there’s another hot sport compact trim that seems to be all but forgotten in the eyes of North American consumers: the Ford Focus ZX4 ST, also known as the O.G. ST because it was the first ST badge in North America. Everywhere else was well familiar with the badge before us.

Thanks to the Focus ST’s hotter-than-average engine in the lineup at the time, more enthusiastic suspension tuning, period-correct sport compact looks, and still-healthy aftermarket, this small sedan shouldn’t be overlooked the next time you’re perusing the classifieds and happen upon one in decent shape—it could make for a genuinely fun daily or project.

It’s Got the Minerals

The naturally aspirated ST only existed during a three-year run beginning in 2005 when Ford facelifted it and the rest of the Focus lineup. The ST had some big shoes to fill after the lively Focus SVT’s Cosworth-tuned engine wowed enthusiasts from coast to coast.

The SVT’s tuned 2.0-liter made 170 horsepower and 145 pound-ft of torque, whereas the new Mazda-sourced 2.3-liter in the ST made just 151 horsepower and 154 pound-feet of torque. This doesn’t automatically sound like it’s a worthy replacement, but according to Car and Driver, the 2.3 was only 0.2 seconds slower from zero to 60 mph, so really, it’s not that big of a deal. Especially considering the 2.3 was a stouter and less expensive lump over the tuned 2.0.

In general, the ZX4 ST was regarded as fun and sprightly, too, even if the sum of its parts weren’t as exotic as those found in the SVT. It featured performance-tuned dampers, a nicely geared 5-speed manual transmission, as well as quick and engaging steering.

Car and Driver wrote back in ’05 that all Focuses (or, Foci) responded enthusiastically to inputs, and that while the ST had softer coil springs than its predecessor, it had stiffer dampers than lower trims—it was noticeably softer and not as responsive as the previous SVT. One could say it was near-SVT, but not exactly a replacement.

Still, thanks to some cool styling accents, including a different front bumper, rear spoiler, and rear lower bumper fascia, it was a blank canvas for enthusiasts. The ST’s base specs are a classic sport compact tuning recipe, even if it didn’t come as enthusiastically tuned from the factory as the SVT did. Front suspension is a MacPherson strut-type of design, which limits suspension and alignment tuning, but it’s all independent multi-link fare in the back. With some aftermarket alignment parts, as well as stiffer springs and sway bars, it’d be easy to dial an ST in to be sharper, with better body roll control, and optimize the contact patches.

Factory Power and An Aftermarket That Still Exists

The engine itself is torquey, and as Car and Driver reported, it hit zero to 60 mph in 7.9 seconds when new. That’s not bad, especially from a naturally aspirated, economy car engine. But there is room for improvement, and power mods can drop that figure a tad.

Fun stuff in this department still exists thanks to the glorious, ever-giving gift of the Fozda era. Because the Blue Oval and Zoom Zoom did so much platform sharing for so long, this means there have been a lot of tuners messing with the Ford Duratec/Mazda MZR 2.3 for a long time. Parts like intakes, exhaust systems, camshafts, and even turbo kits are still around. Frankly, that’s kind of astounding for anything that isn’t a Honda. I’ve only really scratched the surface when perusing parts for a 2.3 Duratec, too. Change that to “2.3 MZR” and surely more Mazda-centric aftermarket parts companies have more for sale. Though, be sure to do your research to confirm fitment.

Unfortunately, the one downside to Ford tuning is wheel availability. Well, at least in the eyes of someone who isn’t a part of the Bowtie Brigade. Ford used its confounding 4×108 bolt pattern for so long, which never saw as many aftermarket options as cars with more common patterns, like 4×100, 5×100, 5×120, etc. Unfortunately, TEing all the things doesn’t seem like it applies here, but at least one of the best-looking wheels ever produced, the Team Dynamics 1.2, is available in this odd size and would make any blue oval build look top-notch. Any wheels in the 15-17-inch range that are available for the later Fiesta ST can mount up to the first-gen Focus ST, but it looks like later, turbocharged Focus STs use 5×108.

Keep An Eye Out

Despite the Mark 1 Focus seeing strong sales during its run, the first-gen Focus ST was a rare bird. A quick search of the usual sources, like Craigslist or AutoTempest, doesn’t yield much for results, even among other rare 2000s tuner cars.

It’s no secret that most first-gen Focuses aren’t survivors. Many examples’ metal has returned to the Earth, but their interiors haven’t withstood the test of time, and it seems like most were considered too disposable to save and take good care of. This doesn’t help the limited number of first-gen, US-market STs out there.

But still, if you happen upon an ST with a manual transmission in decent shape, it could turn out to be a very inexpensive and rewarding project. Replacement parts and aftermarket parts are cheap and plentiful, the chassis is a great baseline for tuning, and I bet registration and insurance would be cheap in any part of the country because it’s an old, econobox four-door.

The post The Mid-2000s Ford Focus ST Is Worth Revisiting as a Reasonable Tuning Platform appeared first on The Drive.