The Only New Lincoln Sedan on Sale Is Built for China. Here’s Why It’s Significant 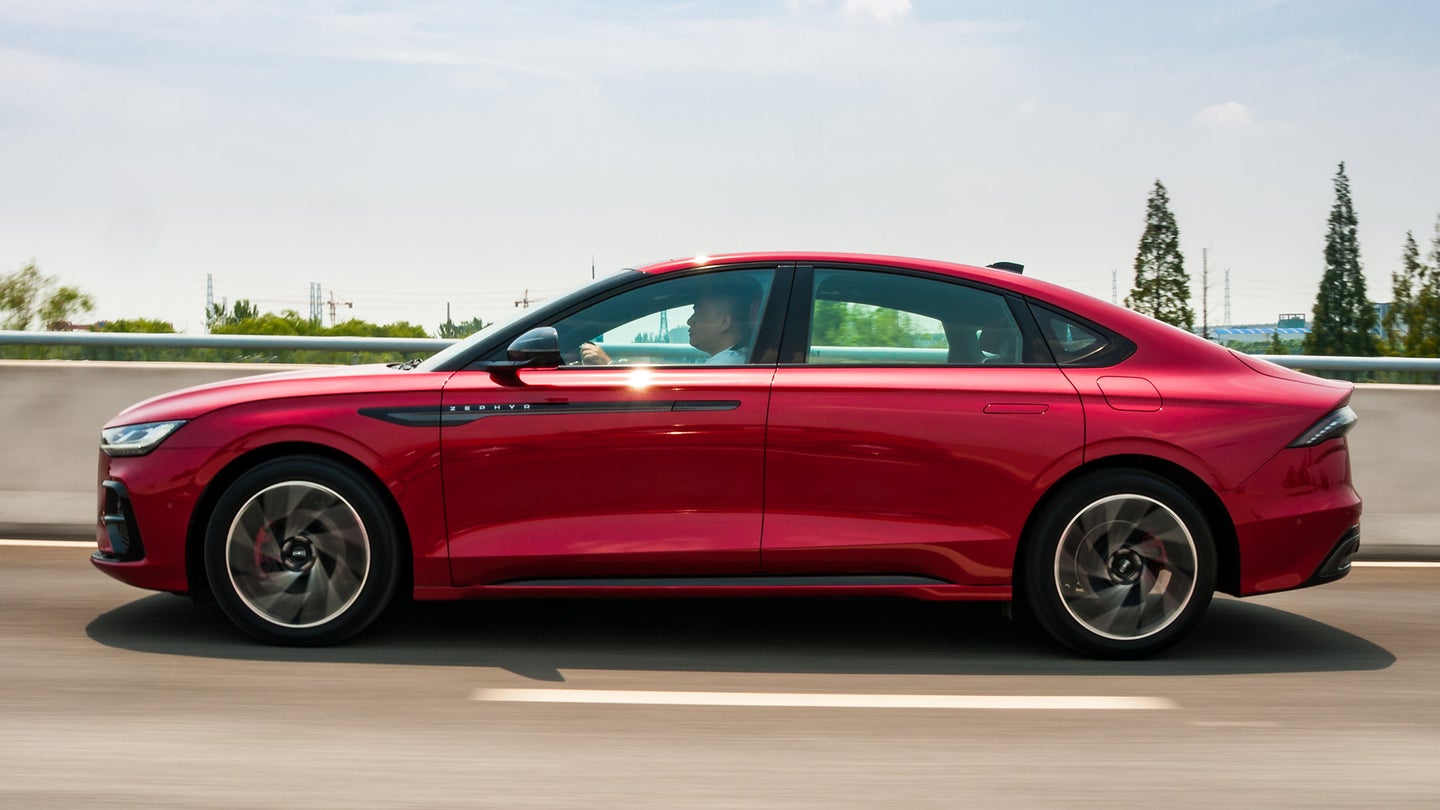 Think Lincoln sedans died when production of the Lincoln Continental ended? Think again. There is a new four-door Lincoln alive and kicking—the 2022 Lincoln Zephyr—and the only catch is you have to travel to China to experience it. It might seem strange that such a storied American luxury brand continues on its sedan legacy for buyers on the other side of the planet, but after taking a look at Lincoln’s extensive history in China, it makes a lot more sense.

Lincoln might only have had an official presence there since 2014, but the brand actually has far more of a link with China than you would first imagine. Lincoln’s cultural footprint builds upon decades of stretch limos for both weddings and the political elite, and that may very well be fueling the demand for a new sedan.

March saw deliveries of the new Zephyr commence. As the discontinued MKZ’s successor, it is currently the only sedan offered by the brand anywhere in the world, is the third model to be locally produced, and will likely extend Chinese sales even further.

As U.S. buying habits have repeatedly shown, SUVs are what rake in profits, not sedans. That’s clearly not the case in China if the launch of a brand-new sedan is anything to go by. For the first time ever, 2021 saw Lincoln sales in China exceed those in the U.S. The arrival of the Zephyr, then, ought to keep tapping into the Chinese market’s love of grandiose American luxury sedans.

To better understand that, it’s worth examining exactly how and why Lincoln gained such prominence there.

Ask a Chinese person aged over 45 or so about Lincoln and you’ll likely be surprised to hear them talk about wedding cars.

“For many Chinese households, especially for my parents’ generation, the logo of Lincoln conjures up fond memories,” Shanghai car enthusiast Ni Tao said. “It reminds them of the time they had spent in a Lincoln stretched limousine on their wedding day in the ‘80s and early ‘90s.”

China has a gray market for car imports and Lincoln Town Cars, particularly limo versions, found their way to China and its wedding service. China may be the world’s largest car market since 2008, but in the ‘80s and ‘90s, cars were few and far between. Even today, a cavalcade of luxury cars is an important part of most Chinese weddings, but back then, it was really a way of making a statement and gaining attention on your big day.

“Like all very luxurious cars, the Town Cars were popular as wedding cars, all the versions, when available,” Erik van Ingen Schenau of the China Motor Vehicle Documentation Centre and author of Hongqi, The History of a Chinese Limousine explained.

But it wasn’t just wedding cars. More surprising still is Lincoln’s connection to Chinese state limousines. In 1959, the Chinese automaker Hongqi (Red Flag) produced a state limousine for China’s communist rulers based on the 1955 Chrysler Imperial. By the ‘90s, however, and in need of new donor cars with more presence than the Audi 100 (C3) that was then in use as a base, Hongqi turned to Lincoln.

The first attempt was the sexy-sounding Hongqi CA7465 based on the second-generation Lincoln Town Car. The main differences were the 1-meter (approximately 3-foot) stretch and a new front based on the classic CA770 limousine from the ‘60s. Hongqi had built the CA770 into the ‘80s, by which time the essentially hand-built cars were hopelessly obsolete. The aim of the retro looks, though, was to create a continuity from the classic Hongqi aesthetic for the top government leaders, and on the back, it gained “Hongqi” written in Chinese calligraphy, allegedly originally written by Mao Zedong. It’s unlikely more than a handful were produced.

Hongqi had another go when Lincoln launched the third-generation Town Car in 1997. The Hongqi CA7460 followed in 1998 and kept the basic looks far more than with the previous attempt. Powered by the Ford V8, the front end gained a new grille, hood, and lights while all other changes inside and out were largely confined to badging. The basic CA7460 spawned no less than three stretched versions, the longest (L2) gaining 1.35 meters (approximately 4 feet 5 inches), and came with a fridge, wine bar, telephone, and TV-computer combo. These were still largely aimed at government use, but individuals with the right connections could get hold of them.

“Hongqi, or rather FAW (the parent company), has flirted and cooperated with several foreign companies,” van Ingen Schenau said of the connection. “I think the Lincoln Town Car, a luxury limousine, fitted best for a replacement of the original big Hongqi (CA770).” Unlike some of FAW’s other projects, this was strictly a business arrangement based on knock-down kits rather than a joint venture.

Finally, in 2004, Hongqi had one last go with Town Cars. This time, the aim was to create a classic Hongqi similar to the CA770 for use as a parade car. While based on the third-generation Town Car, it’s largely unrecognizable, with retro lines and a dropped roofline. Only one prototype CA7400 was built but rejected in favor of a new design for the 2009 military parade commemorating the 60th anniversary of the founding of the People’s Republic of China. A car based on an American icon would have probably been a strange choice for such an event!

But, needless to say, Lincoln’s proximity to decorum, grandeur, and importance did wonders for its image.

Given this history, it’s a wonder that it took Ford until 2014 to officially introduce the brand in China with the MKZ and the MKC. And through a joint venture with Chang’an since 2019, Lincoln has produced models locally.

Design-wise, the Zephyr is much sharper and more aggressive-looking than previous Lincolns. Running lights protrude into the grille and lead your eyes to the Lincoln shield. The iCool-trimmed test car came with an exclusive Hollywood Red paint job.

Inside you immediately notice the sheer frontage of LCDs: a 12.3-inch instrument panel, which blends into a 27-inch infotainment screen that can split in two. Just below the screen are the dashboard-mounted transmission selector and Stop/Start button which flow into the carbon fiber-like trim detail and also mirror the shape of the air vents below.

Materials are of a good standard with leather and microfiber seats, while all touchpoints are either covered or use soft-touch plastics. In the back, there is space sufficient for six-footers and passengers get headrests with adjustable sides that really cocoon you.

While the trunk is capacious, it is problematic. Unlike the Evos which gets an electric tailgate, the significantly pricier Zephyr uses a weighted system that only opens the lid for you. Then there is the unlined underside of the lid where the metal in 100-degree temperatures could fry an egg, creating a space where you wouldn’t want to place your groceries unless you were hoping to cook them by the time you got back from the store.

The electric driver’s seat is also a problem. Firstly, the controls for the lumbar support are mounted directly above the lateral and longitudinal controls, meaning that any adjustment usually had me altering the lumbar support by mistake and, furthermore, I struggled to find a comfortable driving position.

On paper, the straight-four turbocharged 2.0-liter produces 243 horsepower and 277 pound-feet of torque. While it can get the Zephyr up to 62 mph in 6.8 seconds, it’s slower than both the Evos and Mondeo with the de-rated 235-hp version of the same engine!

Where the car has a noticeable improvement over the Evos is with the mapping of the automatic’s eight gear ratios. In the Zephyr, the gear changes are near indiscernible, whereas, in the Evos, it holds gears too long in every drive mode (Eco, Normal, Sport). While the steering is well weighted and the car has a reasonable turn of speed, this is not a performance sedan. The key word is comfort, the ride is generally soft and the car is a comfortable cruiser. There is even an active noise cancellation system and the car embodies Journey of Silence DNA.

Lincoln is trying to deliver equipment levels and space to out-compete the Germans—but can it really compete with the German trio, generally referred to in China as BBA (BMW, Benz, Audi)?

Certainly, the Zephyr packs in the equipment. It comes with a head-up display and the Lincoln Co-pilot 360 driving aid system. The whole system interface and switch ergonomics, though, seem less intuitive than the Ford setup, not what you want in a car that is trying to be premium.

Where Lincoln has really excelled in China is with its service model. It created the Lincoln Way which emphasized customer experience. When it first opened dealers in China it engaged Eight Inc., who designed the original Apple stores, to create stores that were more about the experience than sales.

“Currently, Lincoln has, no doubt, established itself as a second-tier luxury brand, but it still has some catching up to do if it were to be compared in the same breath as BBA,” Ni, the Shanghai-based enthusiast, said. Sales have not yet matched the levels of the German trio, but considering Lincoln’s late start, it has grown quickly, outperforming European competitors such as Jaguar and Alfa Romeo in the Chinese market.

In the Tradition of the Limousines

The Zephyr might not have the length of the old Town Cars that first brought attention to the brand in China, but it certainly has a presence.

While not quite a match in terms of quality to the Germans, it delivers American-style luxury and comfort in a package that most Chinese consumers will find agreeable. However, the biggest problem for the Zephyr is that it might not differentiate itself enough from the Ford Evos and Mondeo, both of which are significantly cheaper and offer most of the same features, barring the luxury veneer.

But as the latest—and currently only—descendant of China’s longtime love affair with four-door Lincolns, its significance is more than just skin-deep.

Mark Andrews is a freelance writer based in Shanghai, China.

The post The Only New Lincoln Sedan on Sale Is Built for China. Here’s Why It’s Significant appeared first on The Drive.