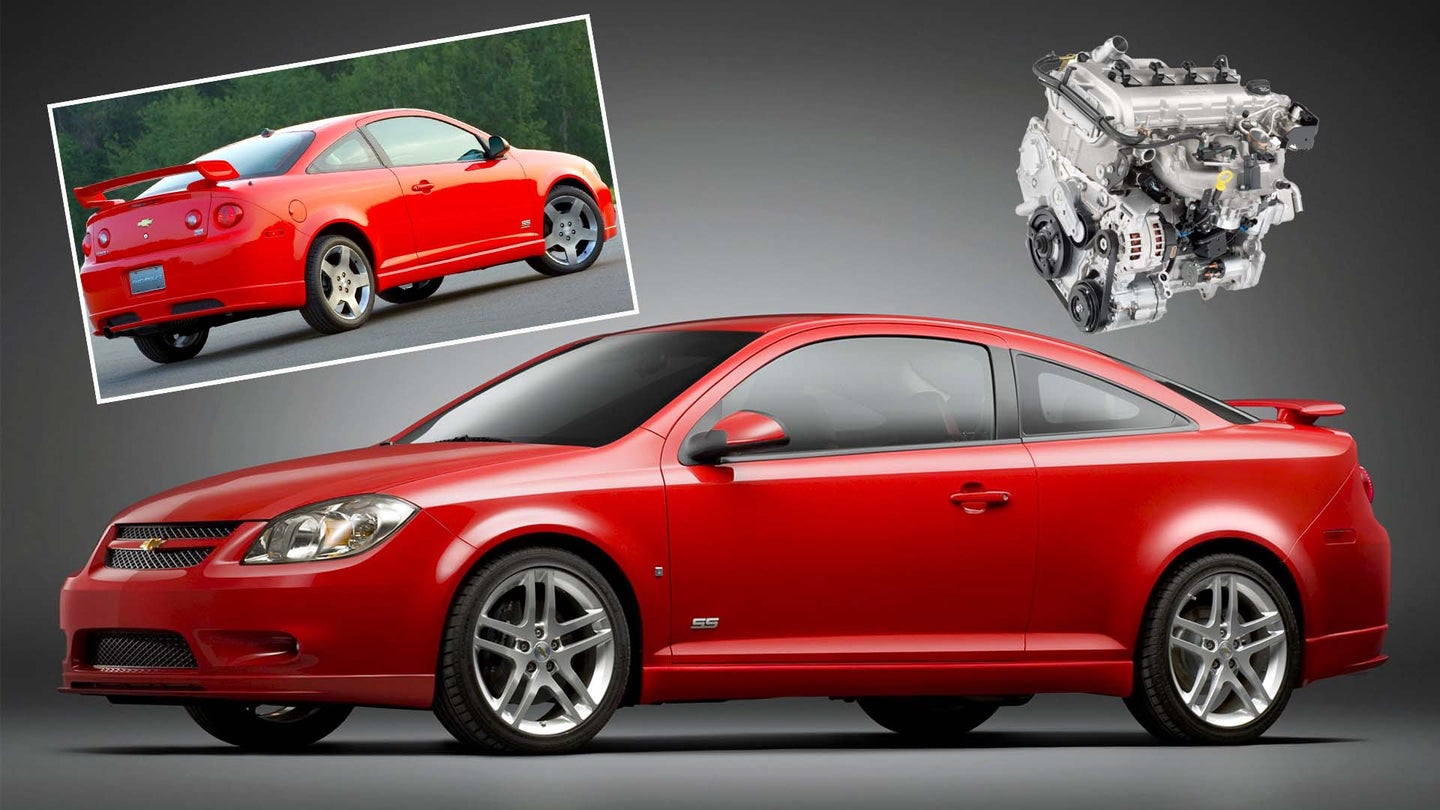 Writing about the Mark Two Ford Focus back in April inspired me to exhaust all options for fun sport compact diamonds in the rough. Amidst my research, it dawned on me that I had completely forgotten about what Ford’s arch-nemesis, General Motors (GM), was up to around the same time. It made an immensely cooler and far more capable car with the Chevrolet Cobalt SS.

Engineered with good ol’ American ingenuity to give the likes of the Volkswagen (VW) GTI and Honda Civic Si a solid run for their money, the Chevy Cobalt SS lasted from 2005 to 2010 and featured a lot of neat factory performance tech in its engine and chassis. It might not be the looker of the bunch but made up for it by possessing some seriously cool tech and specs for a sport compact that we’d still consider respectable today.

The Cobalt SS is also by and large fairly inexpensive in today’s wild used market. I found one listed for as little as less than $8,000. They don’t seem to have any particularly odd maintenance or reliability concerns, either. Here’s why a clean, well taken care of example could be your ticket to thunderous front-wheel-drive fun.

The Chevy Cobalt debuted in 2007 and was based on GM’s Delta platform, shared by the Saturn Ion, Chevy HHR, ultra-similar-looking Pontiac G5, and Europe’s beloved Opel/Vauxhall Opel Astra. It featured MacPherson front strut suspension and basic twist-beam suspension in the rear. At the base level, it possessed a very meh-spec 2.2-liter Ecotec L61 inline-four that made 145 horsepower, and although it was inexpensive and got the job done as an econobox, it was nothing to write home about.

The cool Cobalt SS, on the other hand, was a far cry from the dull regular model and had all the minerals to prove it. Starting in 2005, the SS featured a supercharged 2.0-liter inline-four Ecotec LSJ that produced 205 horsepower and 200 lb-ft of torque. As the generation steamed forth, in 2008 the LSJ was dropped in favor of a turbocharged 2.0-liter LNF (also found in the Pontiac Solstice) that gave it a 55 horsepower 60 lb-ft boost. Chevy also offered the non-supercharged 2.4-liter Ecotec LE5 that made 171-173 horsepower and 164 lb-ft of torque for good measure. Finally, to expand its appeal, GM threw a sedan body style into the mix that I and the other Peter at The Drive think looks pretty cool.

On paper, the Cobalt’s chassis was penalized by its twist-beam rear suspension when competitors’ cars had fully independent fare, but it still won the hearts of journalists when it was new. Especially in 2008 when Chevy made a bunch of revisions. Erik Johnson wrote of the SS for Car & Driver back in 2008 when he penned “Not only does it remain face-peelingly quick, but it’s also now a maniacal piece of machinery that laughs at nearly any corner you toss in front of it.”

Thanks to stiffer control arm bushings, new lower control arms overall, 30% stiffer springs, and bigger 24mm front and rear solid sway bars, the 2008 model cornered quite well. In fact, the only bit of underside metal it shared with the regular Cobalt was the front subframe and featured an SS-specific steering rack to boot. Then, its inputs were refined by redesigning the pedal box to allow for easier heel-toe downshifts.

Some of the especially cool features of the 2008 refresh were front Brembo fixed brake calipers, a Competition mode with launch control, short-throw shifter, and no-lift-shift (meaning, you never take your foot off the gas while shifting gears) programmed into the ECU. These details allowed for a 5.7-second 0-60 time and a 14.1-second quarter-mile time, which is still impressive by today’s standards.

If these aren’t the makings of a great sport compact, I don’t know what is. Chevy didn’t just throw some go-fast and chassis-stiffening parts at the 2008 SS and call it a day, either. It threw it in the ‘Ring (pun intended) against everyone else and managed a lap time of 8:22.85, a new front-wheel-drive sport compact car record at the time. For context, that’s faster than a 987 Porsche Cayman S, E92 BMW 335i, and 993 Porsche 911 Carrera, all tested by German publication Sport Auto during their respective eras.

In addition to being put to the test in Europe, the Cobalt SS was also successfully campaigned in the Grand-Am Koni Challenge (essentially the mid-00s’ IMSA Michelin Pilot Challenge), trading paint with fellow Street Tuner class competitors the Acura TSX and RSX, Honda Civic Si, Subaru Legacy, VW GTI, BMW Z4 and 330i, Mini Cooper S, Mazda RX-8 and MX-5, Hyundai Tiburon, and even the Dodge Neon SRT-4. Quick note: you can still find some comprehensive race reports from back in the day from the series, and some YouTube videos with sick face-melter accompaniments highlight the Cobalt SS in action:

In non-wheel-to-wheel competition, GM took a Cobalt SS fresh off the Lordstown, Ohio, assembly, gave it the track-prepped hot rod treatment, and earned the overall win with a 1:51 lap time at Super Street Magazine’s Toyo Tires Time Attack at Buttonwillow Raceway Park. For anyone familiar with the history of time attack at Buttonwillow in November, including Super Lap Battle and now Global Time Attack Finals, this time is blisteringly fast even by today’s standards, and it was done on a track surface that wasn’t as grippy as it is today.

Additionally, Chevy won Speed Channel’s Street Tuner Challenge that year on the same track with the SS by besting a Nissan Skyline and VW GTI with a lap time of 1:58.

Although the Cobalt is more than 12 years old, its aftermarket is alive and well, as there are a lot of people still singing its praises as a potent little beast.

For factory-backed adornments of fun, Chevy offered optional Recaros, a Quaife limited-slip differential, various warranty-backed power bumps, and various other enthusiast-centric parts from the factory. And still do. Aftermarket-wise, when it comes to bumping the car’s power and tightening up its already excellent suspension, it seems like ZZ Performance is one of the top retailers for everything one would need, from long blocks to tuning software, upgraded turbos, coilovers, clutches, limited-slip differentials, and more. Naturally, there’s a wide variety of beefed-up parts to deal with increased horsepower numbers, too, like upgraded throwout bearings. Despite the Cobalt’s somewhat rare 5×110 bolt pattern, there’s still a solid variety of wheel choices out there, as explained by Fitment Industries.

A quick scan of YouTube reveals some impressive performance figures, some as high as 500 to even 600 horsepower. This might be some of the reasoning why it’s pretty hard to find mostly stock, clean, lower mileage examples on Craigslist and AutoTempest, as many have been beaten and boosted to kingdom come. There’s also a treasure trove of forum threads to comb through for insight about tuning strategy, general reliability impressions, and more.

Still, if only modest power upgrades are on the docket, the Cobalt SS appears to be generally easy to wrench on. It’s generally regarded as reliable, and thanks to being based on a high-production GM platform, parts availability won’t be an issue for a long time. Owners report that even with regular track use and enthusiastic driving, they can provide 200,000+ miles of mostly trouble-free ownership. Sure, more expensive wear items like clutches, timing chains, and turbochargers are a thing, but even those aren’t that expensive, all things considered.

It seems like they suffer a lot of the same issues as other GM vehicles of the era: interior equipment wears out over time solely because the materials are cheap, and there are some minor electrical gremlins here and there. Also, rubber suspension bushings and engine mounts wear out slightly faster than other vehicles… and that’s about it. Reading through Reddit and forum threads was actually pretty refreshing after blogging about a lot of European fare lately.

If You Can Find One, Investigate Further

For a car that came with so much potential packed under its slick coupe and sedan skin from the factory, you’d think it’d be a bit more prominent across all areas of aftermarket tuning, but that isn’t the case. Again, this could be due to many examples having been severely beat on. But if you can find a clean example for a good price, such as less than $8,000 in our current wild used car market, it could be your ticket to front-wheel drive American muscle that can embarrass a lot of high-performance European and Japanese competition in the corners.

The post The Underrated 2005-2010 Chevy Cobalt SS Is a Good Buy Today appeared first on The Drive.