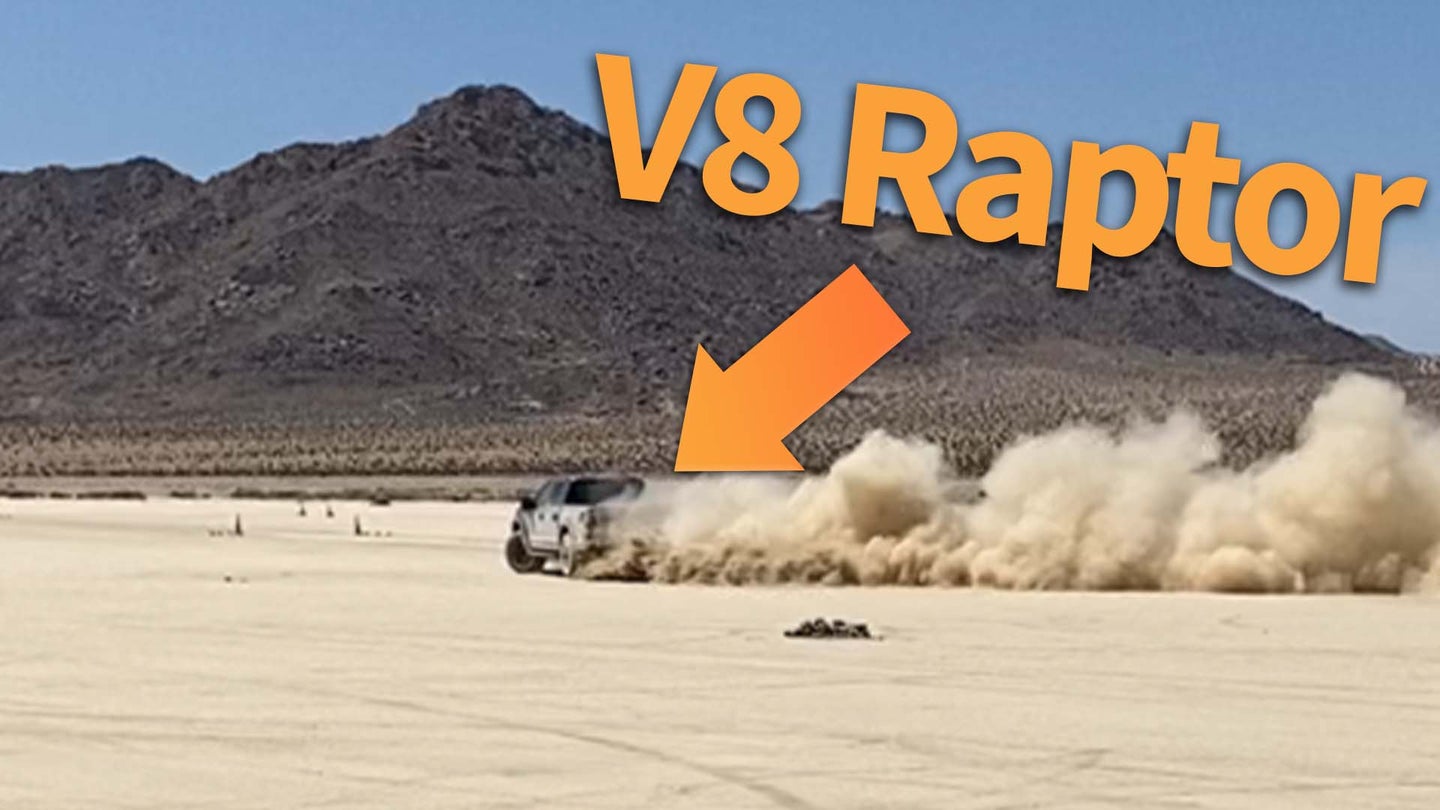 If you’ve been paying attention, you know that a V8-powered Ford F-150 Raptor R is coming later this year. The Blue Oval automaker confirmed this when it launched the third-gen Raptor in 2021, though it’s remained quiet about any other details. Thanks to some leaked images, we know it’s likely to have the Mustang Shelby GT500’s supercharged 5.2-liter—and after seeing and hearing the truck for myself last week, I can’t help but think that’s exactly what’s on the way.

I was out testing the new Bronco Raptor in Johnson Valley, California when the super truck made a surprise cameo. With just a few seconds’ notice, I turned around and nabbed this admittedly bad cell phone video. Nevertheless, you can see that this is indeed an F-150 Raptor, and if you’ve got your volume cranked all the way up, you too will hear a V8 soundtrack.

Considering I was about 75 yards away and the truck kicked up more dust than a Tasmanian devil, I couldn’t pick out too many details. That said, it looked largely similar to the EcoBoost F-150 Raptor, which backs up what we saw in these spy photos from a few weeks ago. I don’t think that’s a bad thing; you can only depend so much on fender flares and big tires to differentiate one model from the next.

Speaking of big tires, it’s all but certain the F-150 Raptor R with sport 37-inch BF Goodrich K02s as standard. That’s the tire of choice for so many desert runners, and that’s exactly who this truck is marketed toward. Fox Live Valve shocks are also expected, though I’m interested to see if Ford does anything else to capitalize on the F-150 Raptor’s new five-link, coil spring rear suspension.

When it comes to exact power figures, it’s hard to say what they’ll be until Ford announces them or an internal document finds its way into our hands. The Mustang Shelby GT500’s Predator 5.2-liter makes 760 horsepower; it’s possible that the F-150 Raptor R could have that much, but I expect it to be slightly detuned. The 702-hp Ram TRX, for example, makes less than other Hellcat-powered models, though I imagine Ford is out to beat that pickup regardless.

There’s a lot of playful back-and-forth between Ford and Ram, including the latter’s depiction of a T-Rex hunting down a Raptor. That may not be the case once this new F-150 Raptor R drops, though—we’ll just have to see.

Got a tip about the F-150 Raptor R? Contact the author directly: [email protected]

The post The V8 Ford F-150 Raptor R Looks and Sounds Like a Return to Form appeared first on The Drive.