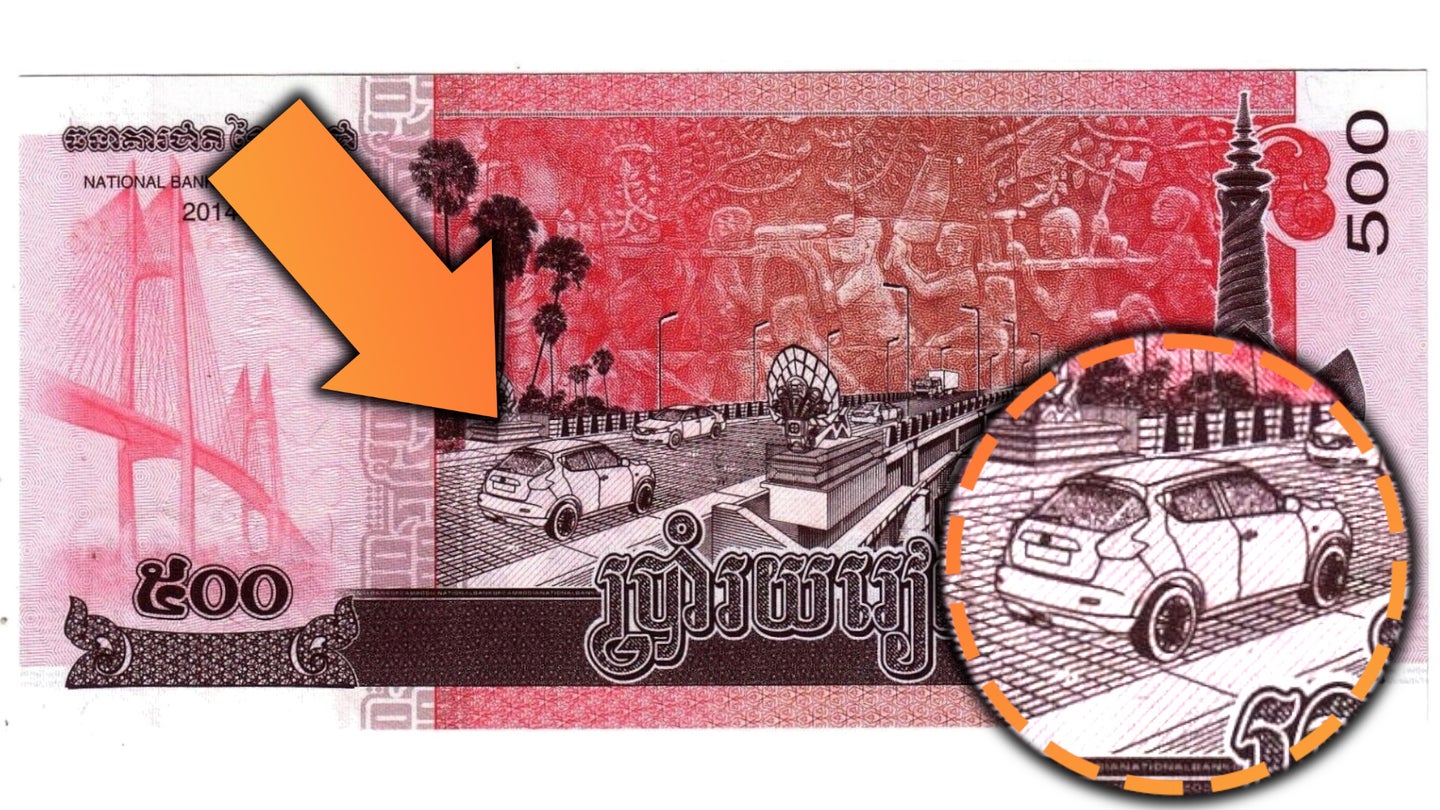 Each country’s currency is always fascinating to look at. For example, people get freaked out by the eye on the back of the United States dollar bill. But Cambodia has something far more interesting. Its 500-riel banknote—which equals roughly 12 U.S. cents—features an image of a vehicle that appears to be a first-generation Nissan Juke.

The car appears prominently on the current version of the 500 riel banknote, reports Tire Meets Road. This version of the note was released in 2014, four years after the Nissan Juke first hit the market. The supposed Juke can be seen in the foreground of a scene depicting the Kizuna bridge over the Mekong River. Traveling in the opposite direction is a sedan that appears to be a Toyota Camry. Further in the distance, a hatchback and a box truck are also driving across the bridge.

On the obverse side, the 500 riel banknote depicts the King of Cambodia, Norodom Sihamoni. Also shown are the five-headed mythical Naga snake and the Royal arms of Cambodia.

It’s unclear how the Juke came to be on the 500 riel banknote. Perhaps the person who designed the note was just a huge fan. Regardless, the vehicle shown is unmistakably a Nissan Juke. It’s clearly identifiable by the swooping L-shape taillight, as well as the location of the handle on the rear doors.

One can also spot the badge and wiper in the center of the rear hatch, though it’s too small to make out any specific Nissan branding. Notably, the rear bumper is the simpler version with horizontal lights rather than the fancier round-light design. For a simple line drawing on a banknote, it’s pretty solidly detailed.

It’s not the first Cambodian banknote to prominently feature a vehicle. The previous 500 riel note from 2004 featured a less-distinct vehicle driving over the same Kizuna bridge. Past Reddit discussions have suggested the Mitsubishi 3000GT, Porsche 911, and the Mitsubishi Eclipse as inspirations, though none are an exact match. Even older 500 riel notes have featured tractors and pastoral scenes.

If you want this unique piece of Cambodian government car art, you needn’t spend a lot of money. The 500-riel banknotes can be sourced for just a few dollars on eBay. If you know an avid numismatist that’s also big into the first-generation Nissan Juke, you’ve just found their ideal gift for the upcoming holiday season. You’re welcome!

The post There’s Apparently a Nissan Juke on Cambodia’s 500-Riel Note appeared first on The Drive.