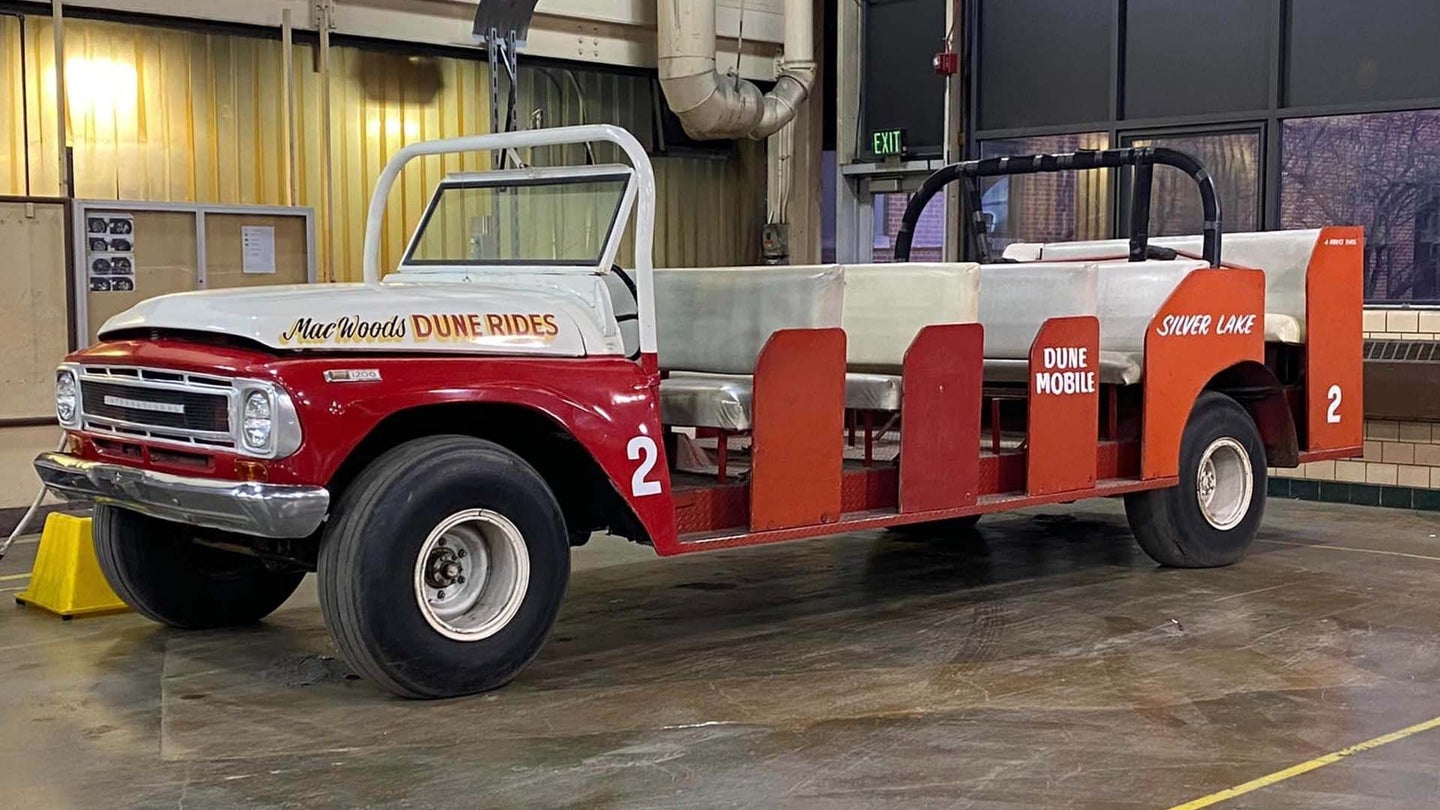 The International Harvester truck community is tight-knit, even though the company stopped building pickups and Scout 4x4s more than four decades ago. Some of the most iconic representations of the brand still live today, and oftentimes, they end up at IH’s former factory in Fort Wayne, Indiana. That’s where the annual Harvester Homecoming meet takes place under the direction of Ryan DuVall, who just retrieved a pair of classic IH dune scooters from Mac Wood’s Dune Rides in Mears, Michigan.

They’ll live at DuVall’s Harvester Homecoming museum that’s growing by the month. The opportunity to snag them first came up in August, and as DuVall tells me, it was a matter of being in the right place at the right time. He’s seen that a lot lately.

“They were looking to add some new trucks to the fleet,” DuVall says. “Basically, they needed to make room in the barns for newer rides. [A Harvester Homecoming volunteer] had told them about our efforts and gave me the information, so I reached out to the family that runs Mac Wood’s Dune Rides. They were very receptive to the idea, we sort of tabled for a month, and then got back together.”

Once they reconvened, they struck a package deal that landed both of the rigs you see here in Indiana.

“We went shortly after and picked up the ’68 Travelall conversion that was actually in the Mac Dunes museum. They had to lower the tires to get it out of the museum because of the clearance. It had all of the fluids drained out of it but we hauled it home, did a little work on it, and it runs like a dream. Just getting some brake work done on it and it should be good to go.”

“The other one, which is a ’75 200 pickup style, they fired it up and ran it around the day we were there first,” DuVall continues. “We just went back out to get it [on Monday].”

Both trucks are fitted with 392-cubic-inch V8s. DuVall tells me that some of the period dune scooters featured smaller lumps measuring 345 cubic inches instead, though they’re all in the same engine family. Truthfully, the fact that they run and drive is cool enough; it’s just a bonus that they feature original IH power.

DuVall says these Internationals were picked for the dune tours out of necessity more than anything else. Back then, not every truck could scale the huge mounds of sand at Silver Lake. That’s why Mac Wood’s outfit nabbed up so many of them and started hacking away to make the ultimate tourist toters.

While dragging the ’75 back home to Indiana, DuVall actually ran into Carl Weigand, a Mac Wood employee of 71 years. He still works there today at 85 years old, and he actually stretched the truck’s frame all those years ago. As Weigand recalls, he drove the Internationals hundreds of miles with just the front hood, fenders, and windshield while sitting on a crate because the rigs didn’t even have seats. Then, he’d truss the axles, build the benches, and make sure they were ready for duty.

It’s altogether a great story of how these iconic International trucks will live to see many more days, and yes, even tours around the old IH plant.

“It’s a testament to Fort Wayne and everything that happened here—everything our people at Harvester Homecoming are doing,” DuVall concludes. “A lot of people are gravitating to that and that’s why we’ve been so fortunate.”

Maybe this dedication to everything IH will be enough for Scout Motors to consider the town for a manufacturing comeback. After all, it’s leaning pretty hard into history these days.

The post These Vintage IH Dune Scooters Are Being Saved From Retirement and Put Back to Work appeared first on The Drive.