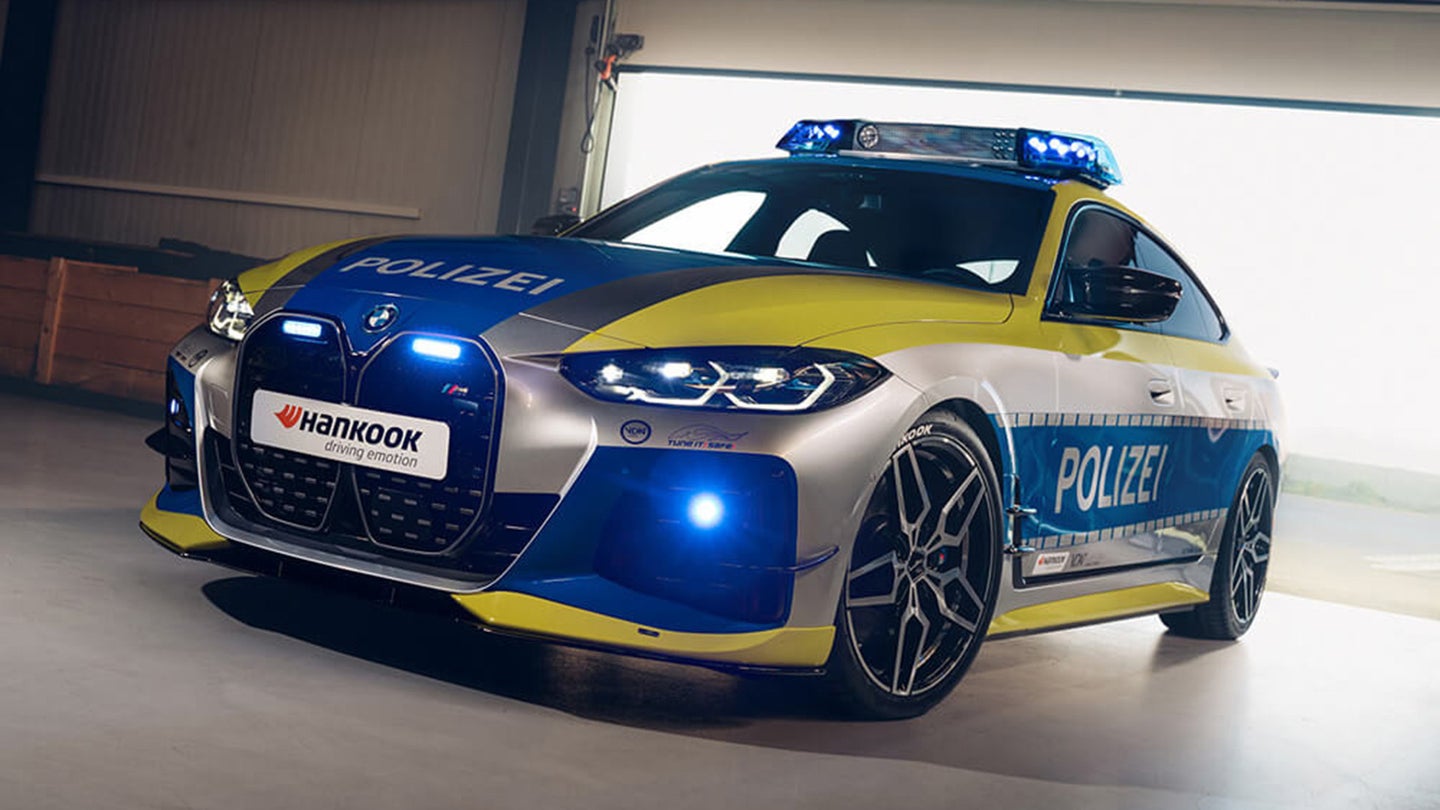 A new BMW i4 police car aims to promote tuning methods that are legal on the streets of Germany.

The vehicle is the work of tuning house AC Schnitzer, as reported by Motor1. Based in the city of Aachen, AC Schnitzer has a history of producing cars for German law enforcement. The new all-electric BMW i4 build marks the eighth police car the company has built. Like so many other German tuning brands, the company prides itself on maintaining street-legal, TUV-approved status for the modification parts that it sells. (TUV is the German authority that deals with safety inspections for roadgoing vehicles.)

The car features a full aerodynamics package. It gets a nice front spoiler added, with aero elements also added to the vents on either side of the classic BMW kidney grilles. There’s also a rear roof and trunk lid spoiler, too, along with various aero trim pieces on the sides of the vehicle. Notably, though, the i4 doesn’t feature any performance drivetrain modifications. Based on the i4 M50 Gran Coupe, it features 536 horsepower from a dual-motor system that drives all four wheels. It’s good for a zero-to-60-mph sprint in just 3.9 seconds.

The i4 has been lowered, too. A spring kit drops the ride height by approximately an inch compared to the showroom model. This aids handling, in particular by lowering the vehicle’s center of gravity. In true German style, the handling upgrades were tested and validated on the Nürburgring. The suspension upgrades are paired with a set of AC Schnitzer flow-formed 20-inch wheels with a split five-spoke design.

Beyond the mild performance upgrades, the car features Hella police lighting on top and special security film window treatments. The interior isn’t left out, gaining a set of aluminum pedals and associated trim. The i4 displayed on the infotainment system has also been updated with a police livery to match the vehicle’s actual exterior.

The car was built for the Tune It! Safe! campaign, which is run by the Federal Ministry of Transport and Digital Infrastructure in Germany. The campaign has been running for the past 17 years and involves companies producing tuned vehicles that are fully compliant with Germany’s strict on-road regulations. For police, it serves as a way to encourage enthusiasts to play by the rules. For sponsors, which finance the program, it serves as a way to showcase their range of street-legal tuning products.

It’s an interesting look at the way the German automotive culture works. We often see tuners and government organizations at loggerheads in the United States. In Germany, the tight regulatory environment and regular vehicular inspections have spurred an ethos of collaboration rather than confrontation. Whether you support the freedom to pursue wild modifications, or you believe in tightly regulating tuning for road safety reasons, there are arguments to be made in favor of either approach.

The post This BMW i4 Aftermarket Police Car Promotes Street-Legal Tuning in Germany appeared first on The Drive.