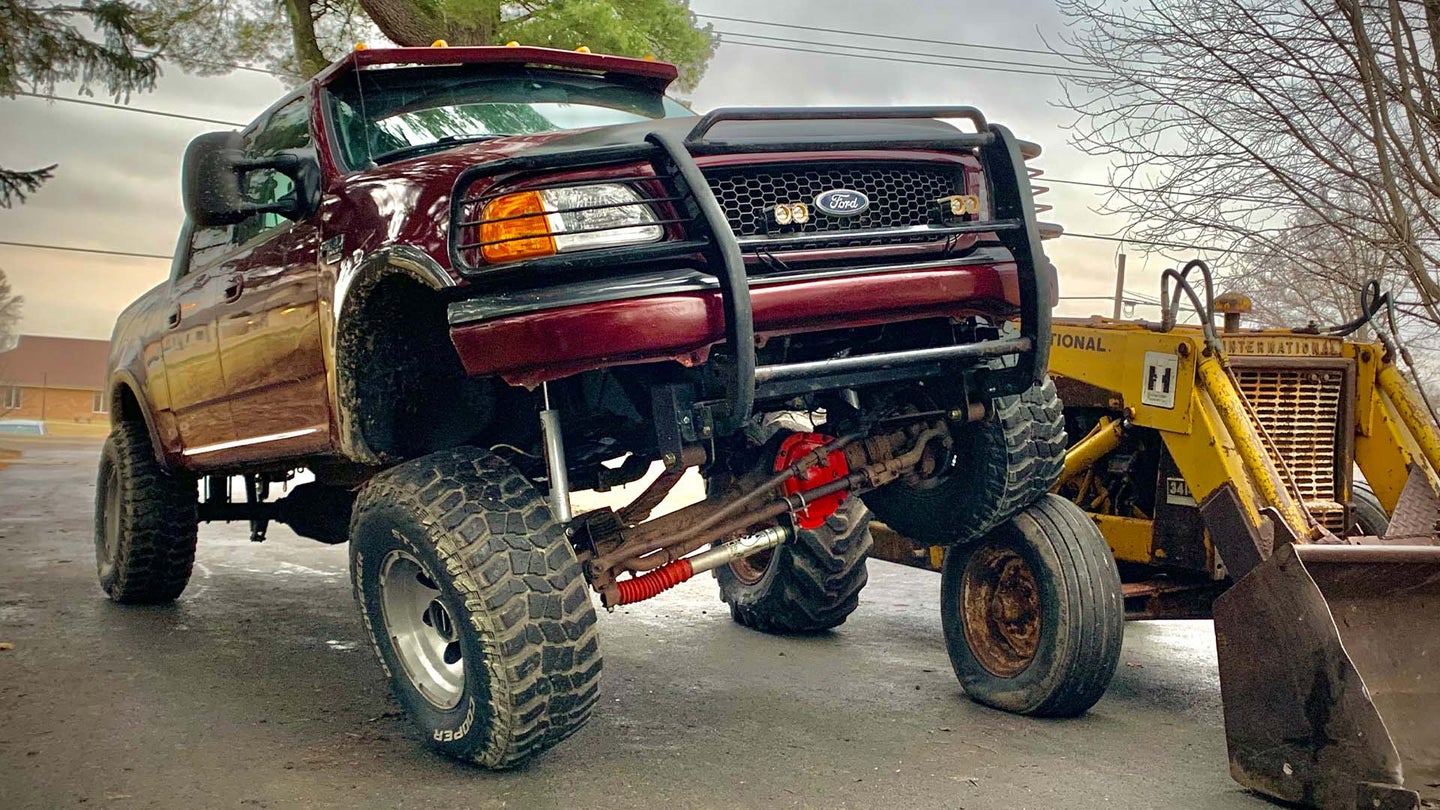 It’s just one of Boerema’s sweet Fords, though it’s arguably the most intriguing. It looks tough with tow mirrors, cab lights, and a visor over the windshield, but if you pay attention, you’ll notice the Dana 60 up front and Sterling 10.5 out back. That’s how you know it’s more than an F-150 with big tires and a lift kit.

“My first truck was a 2003 F-150 right in high school, and that’s what kinda got me connected to these trucks,” Boerema explained. “Technically I found this truck in the supervisor parking lot where I work, and I just so happened to know another supervisor who knew he was selling it, so I got my hands on it. I actually only paid $850 for it.”

He drove it for about 20,000 miles in mostly stock form, occasionally attaching a snow plow throughout the winter months in Illinois.

“Everything I replaced in the front end between plowing and off-roading with oversized tires ended up destroyed again, so I found a set of one-ton axles. I picked them for $500,” Boerema said.

This seemed like the next logical step, seeing as Boerema is used to tinkering with his trucks rather than simply buying something else. He’s got a Bullnose-era Bronco with a turbocharged 6.9-liter IDI swapped in, as well as a Bricknose-era F-350 with a 7.3-liter IDI. It’s part of the hobby to him.

On a long trip to Colorado and back, some more severe problems popped up. The truck’s stock automatic transmission went out and he spent the drive home going 65 miles per hour in second gear. Third and fourth were both gone, so he visited a junkyard near Chicago looking for a replacement.

Boerema wanted a manual and, as luck would have it, he found a 2008 Super Duty with such a gearbox. It had the 5.4-liter V8, just like his truck, and he reckoned everything would bolt up just fine. Not thinking any more of it, he hauled the transmission home, only to find it was a lot longer than the ZF5s in his other trucks.

The stick-shift he plucked from the junkyard truck ended up being a ZF6, which was almost an added bonus. As you’d expect, it required some finagling to fit in the F-150.

“I wasn’t planning on putting the one-ton axles under it right away, but I could not get the transfer case to clear with how big it was on the crossmember for the torsion bars on the independent suspension. So it kinda just turned into one big snowball effect,” Boerema said. “I had to cut all of it out and start the one-ton swap on top of it.”

Rather than using the stock Super Duty springs up front, it’s actually riding on factory Bronco rear leafs. Y’know, for comfort. It’s a pretty cushy ride, according to Boerema, and it looks better than most 4×4 10th-gens I’ve seen.

The swap was done roughly 3,000 miles ago. He drives it 60 miles to and from work every day, along with the occasional gooseneck pull. You don’t have to worry about this one sitting around and collecting dust—he’s going to keep tacking on the miles until it quits for good.

The post This Garage-Built ‘F-12350’ Ford Truck Has One-Ton Axles and a ZF6 Stick Shift appeared first on The Drive.