This Is Russia’s Electronic Warfare Helicopter Jamming In Ukraine 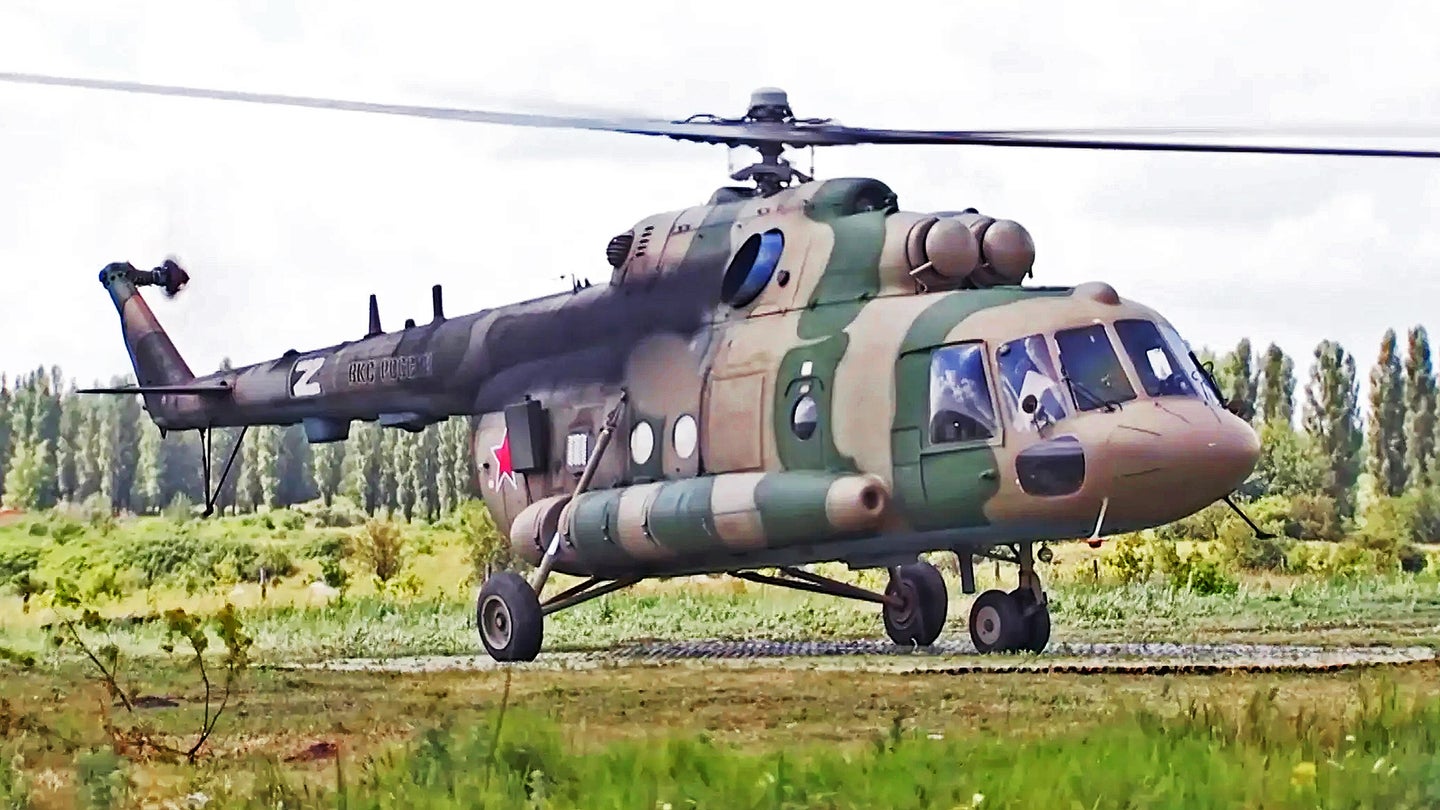 A rarely-seen Russian military helicopter is playing a discreet and potentially extremely valuable role in the Kremlin’s war in Ukraine. Loitering deep inside Russian-controlled territory to avoid being shot down and flying at an altitude of more than 10,000 feet, for optimum effect, Mi-8MTPR-1 Rychag helicopters are waging electronic warfare against Ukrainian air defense systems.

The use of the Mi-8MTPR-1 electronic warfare (EW) helicopter in the war in Ukraine is confirmed by imagery released by the Russian Ministry of Defense. In one video, shown below, a soldier (perhaps a pilot) standing next to the helicopter explains that the Rychag system is used “to suppress the air defense capabilities, of all variants, that are in the neighboring territory, both analog Western systems, and former Soviet systems” in order to enable Russian strike aircraft to penetrate deeper into Ukraine.

The Mi-8MTPR-1 EW helicopter is a modification of the standard Mi-8MTV-5-1 combat transport helicopter manufactured by the Kazan Helicopters plant. For the manufacturer, the aircraft has the internal designation Mi-8MTV-5PR, in which PR stands for Pomekhovyi, Rychag, i.e., jamming helicopter with the Rychag system.

The Rychag-AV (Aviatsyonnyi Vertolotnyi, airborne for helicopter; Rychag-AVE is a derivative for export) EW system suppresses enemy surface-to-air missile (SAM) system fire-control radars by jamming them. In this way, it provides protection for a group of friendly strike aircraft, helicopters, or drones. The system can also jam the radars of enemy aircraft, thereby offering protection not only for friendly air assets but also helping to defend friendly ground troops that might otherwise come under air attack under some scenarios.

The Rychag-AV system with its L187A jammer was designed and developed by the Kaluga Research Institute of Radio Engineering, or KNIRTI, and is manufactured and installed on the helicopters by the Kazan Optical and Mechanical Plant (KOMZ), part of the Radio-Electronic Technologies Concern (KRET).

In the Mi-8MTPR-1, the existing cargo/passenger hold is divided into two parts. The hardware associated with the Rychag-AV system is installed in the much larger rear part, with the system operator’s station in the smaller front part. The system’s four antennas are located on either side of the fuselage. The two front antennas are receivers/direction-finders that detect enemy radars that are operating and determine their type and location. The two rear antennas are transmitters, which emit radiation to interfere with these detected radars.

Flare launchers are mounted in one of the rear windows on each side of the fuselage to protect the helicopter against infrared-guided anti-aircraft missiles.

According to KNIRTI, the L187A jamming station operates in a frequency range from 5.1GHz to 11GHz (2.7-5.9cm wavelength, or C- and X-band). Eight radars in a sector with an angle of 45 degrees in azimuth and 15 degrees in elevation can be suppressed simultaneously. At a distance of up to 93 miles, the effective radiated power is 105kW for each target. The entire system weighs 2,646 pounds (or 3,086 pounds according to alternative data), and the fully equipped helicopter can loiter in the air for 2.4 hours.

The Rychag-AV system can work fully automatically, without the need for operator participation, according to a pre-set program. This uses a memorized library of enemy radars and automatically selects suitable jamming methods. In the semi-automatic mode, the operator selects the methods of jamming, while in the manual mode the operator also assesses the overall electromagnetic situation and selects the targets to be jammed.

Otherwise, the helicopter’s flight crew consists of two pilots and a flight technician, which is typical for a Mi-8 helicopter.

In 2013 at least one Rychag helicopter (in this case, officially designated “Mi-8MT with L187AE system”) was delivered to a foreign customer, probably Vietnam. In 2018, one Mi-8MTPR-1 was seen in Syria, with Syrian markings, although that doesn’t necessarily mean it was operated by the local military since other Russian-operated helicopters have also appeared with Syrian markings or a combination of Russian/Syrian markings.

The Russian Aerospace Forces, or VKS, currently have around 20 Mi-8MTPR-1 helicopters. These are distributed among several Brigades of Army Aviation (BrAA): the 15th BrAA at Ostrov in the Western Military District (MD), the 16th BrAA at Zernograd in the Southern MD, and the 18th BrAA at Khabarovsk in the Eastern MD. A few helicopters are also assigned to the 440th Independent Helicopter Regiment in Vyazma in the Western MD and at Russia’s airbase at Erebuni in Armenia.

Based on the available imagery, in which the helicopters’ individual numbers are blurred to censor them, Mi-8MTPR-1s from Ostrov and Khabarovsk — and perhaps also other units — have been involved in the war in Ukraine. Judging by the ‘Z’ letter, the Mi-8MTPR-1 shown at the top of this story belongs to the Western MD, so is either from the 15th BrAA or the 440th Regiment.

The Mi-8MTPR-1 is the newest Russian EW helicopter and is currently the only one in production. It’s probably also the only model in active service with the Russian military. However, the Soviet Union developed numerous different EW helicopters, most of which were based on the Mi-8 airframe.

Beginning in the early 1970s, the Soviet air forces used multiple versions — at least 16 have been identified — of the Mi-8 equipped for electronic countermeasures (ECM) and electronic intelligence (ELINT). In more recent times, the Mi-8PPA and Mi-8SMV-PG helicopters were used by Russia in its war with Georgia in 2008. Russia claims that the use of the Azaliya EW system on Mi-8PPA helicopters reduced the maximum search range of Georgian ground radars from 186 miles to 19-31 miles. Meanwhile, the use of the Smalta-PG (on the Mi-8SMV-PG) is claimed to have reduced the range of Buk-M1 (SA-11 Gadfly) and S-125 (SA-3 Goa) SAM system guidance radars from 16-19 miles to 6-9 miles.

While the Russian EW helicopter fleet is much smaller and less varied than in its heyday, it’s worth noting that, at least prior to the latest Russian invasion, Ukraine was making efforts to return to service Cold War-era EW rotorcraft. These included the Mi-8MTPB with the Bizon communications jamming suite and the Mi-8MTPI with the Ikebana jamming system, intended to disrupt an opponent’s battlefield radars, including those associated with air defense systems. The status of these helicopters, which you can read more about here, is uncertain and there is no evidence of them being used in the current conflict, although it’s certainly a possibility.

In January 2016, the KRET concern announced it had handed over for evaluation a test example of the modernized Rychag-AVM electronic warfare system. The deputy CEO of KOMZ, Aleksey Panin, said the modernized system emits at a higher power than the Rychag-AV, offers more functions, and that its “tactical and technical characteristics surpass all similar systems existing in the world,” a major and totally unconfirmed claim. KRET’s deputy CEO Igor Nasenkov added that the new Rychag-AVM systems were to be fitted to Mi-8AMTSh transport helicopters made by the Ulan-Ude plant. This is in contrast to the current Rychag-AV systems, which are installed on Kazan-made Mi-8MTV5-1 versions. In practical terms, however, there is no difference between these helicopters, other than the manufacturing facility.

Aleksey Panin also announced that series production of the modernized Rychag-AVM would start in 2017; however, there’s no confirmation of whether this ever happened. As it stands, Mi-8MTPR-1s delivered to the military in early 2021 were in the standard Rychag-AV version, suggesting that the Rychag-AVM is at least delayed, if not abandoned.

In addition to the modernization of the Rychag system, it’s known that Russia is working on a new helicopter EW system codenamed Bosfor-2 (Bosporus). A scale model of this helicopter was presented, without any additional explanations, at the ARMY International Military-Technical Forum in August 2018. The model showed the Bosfor-2 system installed in a Mi-8AMTSh from the Ulan-Ude plant.

At around the same time, a similar-looking helicopter began test flights at the Russian Helicopters corporation test facility at Tomilino, near Moscow. The helicopter in question has numerous unusual-looking antennas under the front of the fuselage, on the fuselage sides, as well as mounted above its stores stations.

Made by the Moscow Scientific and Research Institute of Radio Engineering, or MNIRTI, the Bosfor-2 system has a different mission than the Rychag: it is intended to disrupt enemy communication and navigation signals. The current status of this program is unclear.

As for the success of the Mi-8MTPR-1 Rychag in the ongoing war in Ukraine, that’s also uncertain. Very few, if any, accounts are available beyond the videos from the defense ministry’s official channels. In one of these, the interviewee remarks: “It is difficult to judge the quality of our work. All we know is that if aircraft come back, that means we did our job right, it was effective.”

However, judging by the continuing heavy losses that are being inflicted on Russian tactical and army aviation, the Mi-8MTPR-1 can be considered generally ineffective, at least in terms of the bigger air war picture. Overall, Russia’s extensive EW capabilities appear to have had very mixed results in the war so far, as you can read about in our in-depth feature on the topic.

If the Rychag system is providing a useful degree of protection for other aircraft and perhaps also troops on the ground, this is likely being achieved over only limited sectors of the battlefield. On the other hand, we have seen plenty of evidence of Russian (and Ukrainian) tactical aircraft and helicopters operating at very low levels, to avoid destruction by medium- and long-range air defense systems. This, in turn, brings them into the engagement zones of short-range air defense systems, including shoulder-launched missiles and self-propelled anti-aircraft artillery. Against threats like these, which typically rely on infrared or even man-in-the-loop guidance, the Mi-8MTPR-1 is of no direct value. The problem will only become greater as Ukraine receives a wider variety of more modern Western air defense systems. Rychag has, so far, at least in most cases, only really faced Soviet-era systems that are intimately familiar to its designers. So, the idea that it would perform better or even similarly against advanced western systems is extremely unlikely.

As the ground war becomes more difficult for the Russians, with Ukraine making gains in different areas, the need to provide means of suppressing Ukrainian air defenses will likely only become greater for the aggressor.

The post This Is Russia’s Electronic Warfare Helicopter Jamming In Ukraine appeared first on The Drive.