This Is The B-21 Raider Stealth Bomber 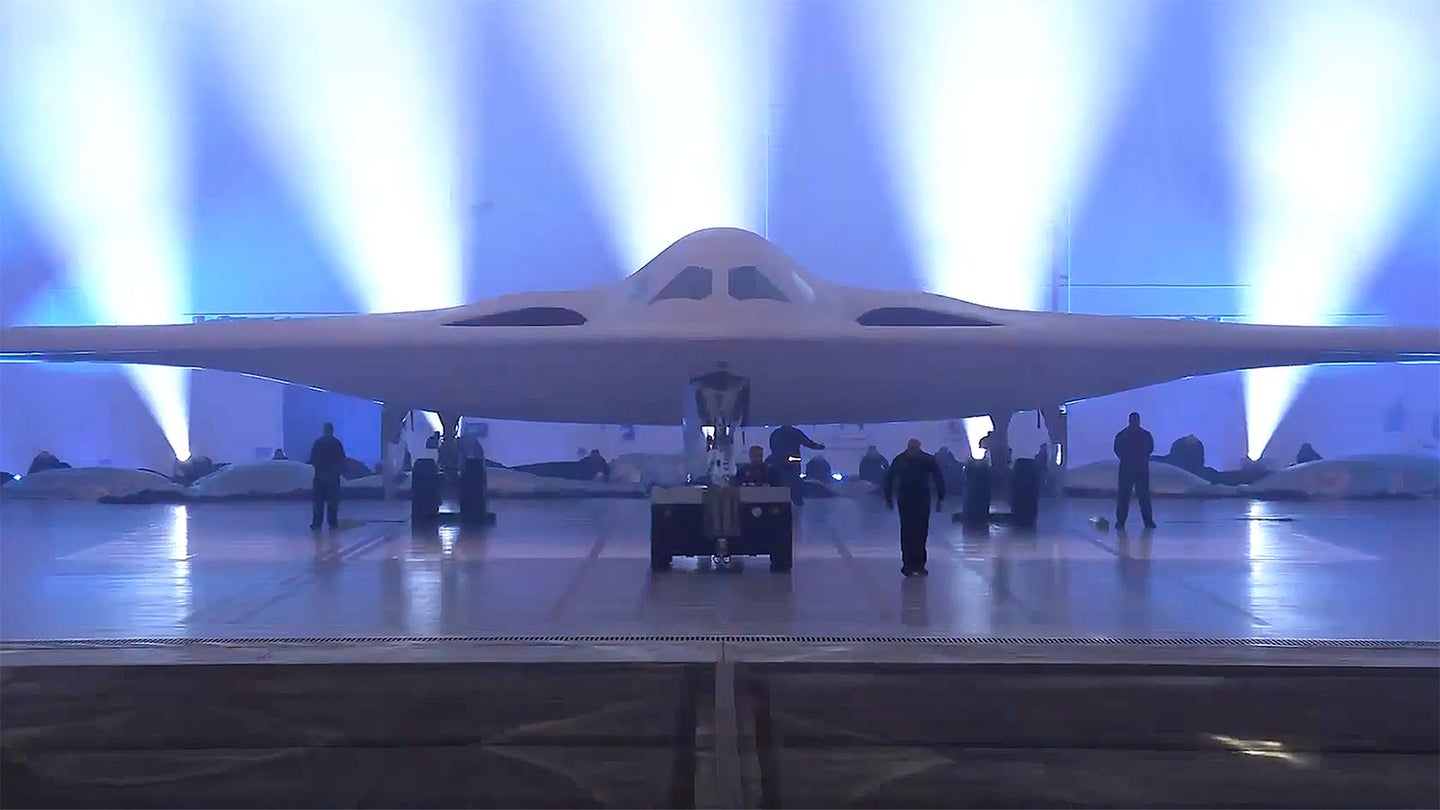 In one of the most hotly anticipated military aviation reveals in history, Northrop Grumman, together with the U.S. Air Force, has finally lifted the veil from the B-21 Raider stealth bomber.

Journalists from The War Zone and other outlets were invited to actually attend today’s rollout in person, but it is being live-streamed for the general public after weeks of almost Super Bowl-esque buildup. Northrop Grumman actually teased the bomber in an ad broadcast during Super Bowl XLIX in 2015. The aircraft seen today, also referred to as T1 or aircraft number 001, is currently undergoing ground testing and is set to make its first flight sometime next year. There are five other B-21s known to be in various stages of production.

We will be updating this post very quickly with an analysis of what we are seeing and firsthand reporting from on the ground in Palmdale. We’ve also provided a section to help readers catch up on the state of the program before today’s event and to better understand what we know about the B-21 and what we don’t.

Prior to today’s rollout at Northrop Grumman’s facility at the Air Force’s Plant 42 in Palmdale, California is the first public look at any aspect of what has been a secret aircraft. Only a small number of digital renderings have been previously released since the first development contract for this bomber was awarded in 2015.

Those renderings have supported the long-established understanding that the B-21 would be smaller overall compared to its direct predecessor, Northrop Grumman’s B-2 Spirit stealth bomber, and The War Zone‘s analysis that it will be optimized for higher-altitude flight more in line with pre-B-2 Advanced Technology Bomber concepts. The most recent concept art had pointed to a curious cockpit windscreen configuration.

The B-21’s basic range and stealth capabilities are “significantly greater” than “the requirements that the Air Force had,” Northrop Grumman’s CEO Kathy Warden told Breaking Defense in an interview ahead of the rollout, but couldn’t provide any specifics. “The open systems architecture of the B-21… will make it easier to upgrade over time and [the] ways that we’ve manufactured the B-21 compared to the B-2 that will also make it far more sustainable in terms of the exterior and the hardware of the platform.”

Overall, Northrop Grumman has touted the B-21 as the world’s first true sixth-generation stealth aircraft, and, when it comes to its radar and other signatures, this will have a lot to do with the advanced nature of what lies below its radar absorbent skin as its external shaping. Maintainability and sustainability requirements were also top design drivers for the B-21. The skins and structures on stealthy aircraft like the B-2 have historically been extremely costly and complex to maintain, often contributing to low availability rates, the B-21 aims to break that paradigm.

When it comes to the aircraft’s full range of operational capabilities, there have been many questions, including whether it might have new, somewhat novel low-observable capabilities and the degree to which it will be pilot-optional at the time of delivery. The ability to operate in an uncrewed mode was among the key requirements the Air Force laid out for the Long Range Strike Bomber (LRS-B) program under which the Raider has been developed.

It has long appeared extremely likely that the B-21 is more of a multi-purpose platform than a pure bomber, and that it will feature significant electronic warfare, intelligence, surveillance, and reconnaissance (ISR), communications relay, and other capabilities. There have been discussions even about the possibility of the Raider having an air-to-air combat role, even in just a defensive manner. That it will play the role of a ‘quarterback’ for groups of networked drones with high degrees of autonomy has also been posited.

The aircraft’s many components, some of which are said the be mature are also a mystery. Porting various well-developed avionics over from other aircraft, like the F-35, has been speculated on in the past. Laser-based or other types of active anti-missile protection systems may be in the bomber’s future, at least somewhere down the line, regardless of its initial capability set. We know the airframe and its subsystems were designed to accommodate significant growth over what will likely be many decades of service. What we do know is that the B-21 will be a direct successor to the now 35-year-old B-2 Spirit, incorporating all the lessons learned and advances in technology since that aircraft was unveiled decades ago. In a way, Northrop Grumman has gotten the opportunity to build the B-2 ‘2.0’ of sorts, making the concept all that it could be.

Northrop Grumman said that the Raider was “developed with the next generation of stealth technology, advanced networking capabilities, and an open systems architecture” and “will deliver a new era of capability and flexibility through advanced integration of data, sensors, and weapons,” in a press release earlier this week. In separate interviews, Tom Jones, president of Northrop Grumman’s Aeronautics Systems unit, touted the bomber’s ability to support the U.S. military’s broader Joint All-Domain Command and Control (JADC2) vision, which is focused on the integration of advanced networking and associated capabilities into future operations.

The Air Force has also made clear that the B-21 is part of a family of Long Range Strike systems, the full extent of which has been shrouded in secrecy. It certainly included new weapons, such as the future nuclear-armed stealthy Long Range Stand Off (LRSO) cruise missile that the B-21 and B-52 will be able to carry, as well as sensors and other mission systems, and may even directly include work on other stealthy crewed and uncrewed aircraft. It isn’t clear how much these plans have changed in the years since its direct development began.

Regardless, the B-21 Raider is set to become a key component of America’s strategic bomber force, alongside re-engined and otherwise upgraded B-52 bombers, for decades to come, providing both nuclear deterrent and conventional strike capabilities. Air Force officials have made clear in the past that they see the Raider as being particularly essential to ensuring America’s deterrent capabilities in the face of China’s growing strategic arsenal. It is also a centerpiece of America’s conventional weapons strategy in countering China militarily over great distances in an anti-access/area-denial combat environment like what could be experienced in a future war in the Pacific.

The Air Force expects to ultimately replace all of its existing B-2 Spirit stealth bombers, as well as its swing-wing B-1s, with B-21s in the coming years. The service hopes to begin receiving operational Raiders in the mid-2020s, with the first squadron of these bombers to be based at Ellsworth Air Force Base in South Dakota. Additional units will follow at Whiteman Air Force Base in Missouri and Dyess Air Force Base in Texas.

The total expected size of the B-21 fleet is unclear, as is how much each one, as well as the total program, may cost. The Air Force has said that the estimated average unit pricing, not factoring in research and development costs, currently remains under the $550 million target, which is in Fiscal Year 2010 dollars, that was set as part of the requirements for the LRS-B program, according to a report from Bloomberg earlier today. This means the current average expected unit cost for the B-21 should be no more than $692 million in Fiscal Year 2022 dollars.

However, the Air Force has talked about the possibility of acquiring as many as 145 B-21s in the past, which would have significant impacts on both the total program cost and the average unit cost. Members of Congress, as well as Air Force officials, have repeatedly described the B-21 as a model acquisition program, despite technical hiccups and other apparent delays.

With all that being said, this is truly a historic day for the Air Force, Northrop Grumman, and aviation and military technology aficionados all over the globe. As noted earlier, we will be updating this post live with additional information and analysis.

The post This Is The B-21 Raider Stealth Bomber appeared first on The Drive.