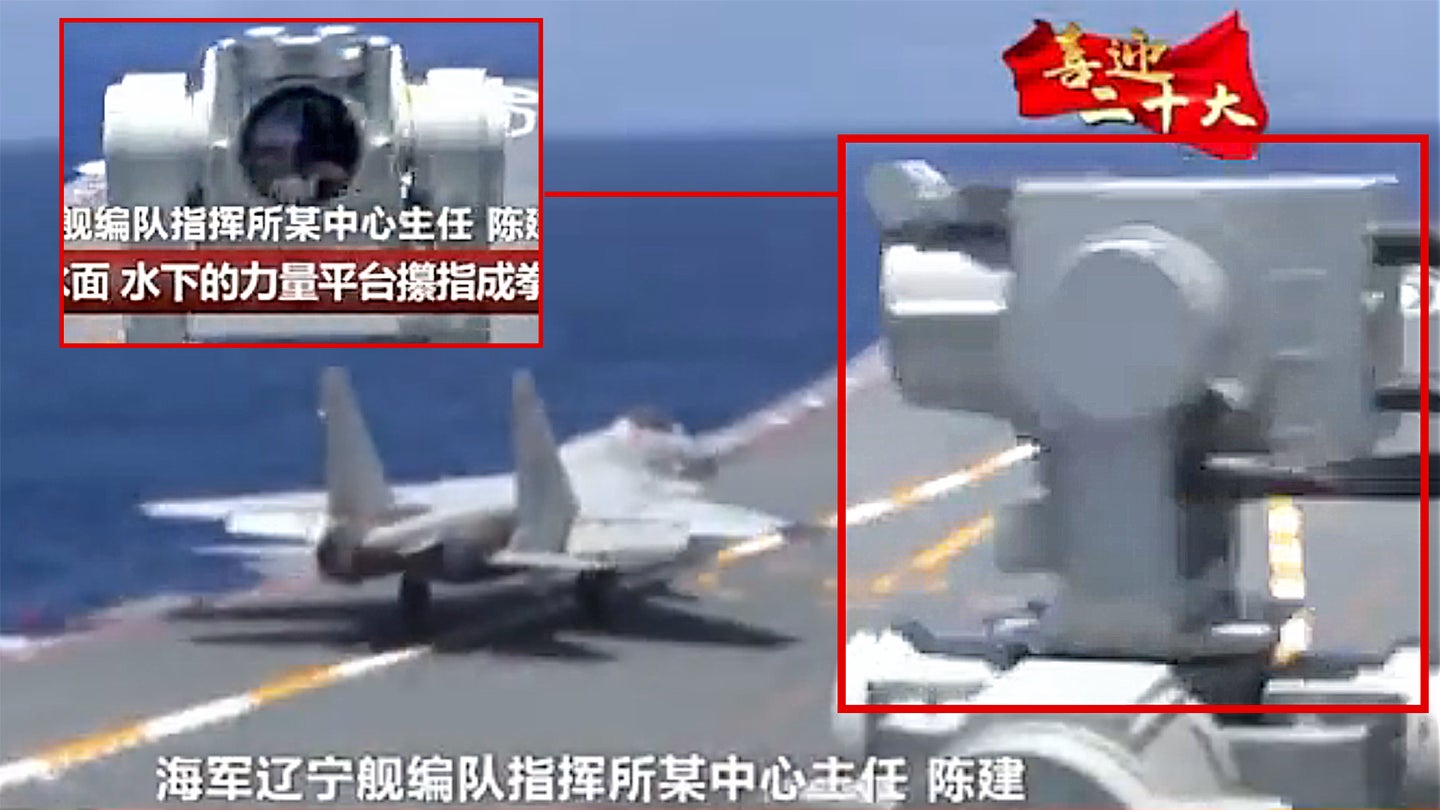 A video taken from a Chinese state TV broadcast shows Chinese People’s Liberation Army Navy J-15s launching from the country’s Type 001 Liaoning aircraft carrier and an interesting spinning optical device can be seen in the foreground mounted on the ship’s island. While the device’s exact designation is unclear, it appears to be a relatively obscure, but increasingly important capability that gives the carrier certain advantages when it comes to spotting and tracking potential threats.

The system’s general appearance and characteristic continuous rotating points to it being a panoramic infrared search and track-type system (IRST). IRST systems, in general, would be an advantageous addition to an aircraft carrier, such as Liaoning, as they are passive in nature, meaning they are immune to electronic warfare systems aimed at disrupting radars and other radio frequency emissions. IRST systems are focused on detecting and tracking objects via the infrared radiation they emit, which would thereby create another defensive sensing layer beyond radar and passive electronic surveillance measures around the vessel to aid Liaoning in spotting threats and providing enhanced general situational awareness.

What makes this type of unit different than say IRSTs found on aircraft is that it mechanically spins 360 degrees in a constant motion to build a ‘panoramic’ or 360-degree ‘picture’ of what is happening around it at any given time. The computing and software backends of these systems are increasingly capable and use machine learning and artificial intelligence to automatically detect, classify, and alert operators to the appearance of objects of interest and feed their data into larger combat management or defensive systems ecosystem aboard a ship.

This would allow close-in defensive systems, telescopic electro-optical and infrared sensors — which many warships have in abundance — and radars to immediately investigate any targets of interest the system detects. As noted earlier, IRST systems are completely passive and don’t emit radio-frequency emissions themselves, meaning targets that have been detected and then tracked by them are not alerted to this fact, potentially giving users of the system an upper hand.

Of course, 360-degree IRSTs are optical devices, so they do not provide ranging/distance data as a radar would, nor are they active sensors that rely on emitting radio-frequency energy. But it’s possible that networking multiple devices together mounted on different ships, or even spread far apart on a very large one, could provide triangulated positioning range data on targets, although other systems could be better suited for this once a threat is detected by the IRST and they are cued onto it.

Such a system is especially relevant for China’s aircraft carriers. It would be very useful in spotting hard-to-detect objects like swarms of small drones and boats in the vicinity of the ship, but above all else, it has special relevance when it comes to the anti-ship missile threats that these carriers would face in a time of war.

While some anti-ship missiles rely on speed, others rely on stealth. The U.S. AGM-158C Long Range Anti-Ship Missile (LRASM) and the Naval Strike Missile, as well as the Block V Tactical Tomahawk to some extent, along with other cruise missiles in service with the United States and its allies, are stealthy. The LRASM is especially so. They also rely on imaging infrared seekers for their terminal attack runs on their targets, meaning an active radar seeker does not give their presence away to the ship they are attacking.

Combined with their sea-skimming flight profiles, they greatly diminish the effectiveness of traditional radar systems for detection and engagement. When flying low over the horizon at a ship, the time to react is minimal in the first place. As such, a 360-degree IRST like this becomes something of a critical defensive sensor. The limitation of China’s radar technology could also place further weight on the employment of these systems.

Twitter user @HenriKenhmann, a defense analyst with the independent French news outlet East Pendulum, was quick to share a Chinese product card for a system dubbed IR-17 when we inquired about the system in the video after it had started making its rounds on social media. The card reveals IR-17’s basic functions, but it’s still relatively difficult to come across any additional publicly available information as to its abilities. While it does not match the device on the Liaoning perfectly, the IR-17 appears similar and we could be seeing a slightly different or production version of it on the carrier. Regardless, this is a known albeit still somewhat obscure capability that China clearly has had an interest in, just as a number of other manufacturers around the globe have.

A China Shipbuilding Industry Corporation (CSIC) watermark can be seen printed across the background of the product card, which isn’t particularly noteworthy as CSIC is a giant conglomerate with multiple subsidiaries and subdivisions throughout China. Both Chinese- and English-language portions of the card are also depicted, split up into categories designated as ‘Missions,’ ‘System Composition’, and ‘Main Technical and Tactical Specifications.’

In terms of the IR-17’s missions, a camera flash or a lens flare of some kind has unfortunately obscured pieces of the information provided. What is legible divulges that the system can search at “low and super-low” altitudes, provide the command and control system with target information, and provide close-in defense weapons with target information in real-time. The last bullet point is particularly notable as even with the missing details it indicates that cueing data acquired by the IR-17 could transmit directly to a ship’s combat systems in near-real-time, which is certainly in line with what we explained before.

As far as IR-17’s performance specifications are concerned, the card states that its operational range in absolutely ideal conditions is no less than about five miles against sea-skimming anti-ship missiles, 12 miles against other cruise missiles, and 18 miles against fighter planes. It can reportedly track and memorize at least 30 targets. This could present the potential for it or a device like it to be useful in helping to counter drone swarms, which are a major tactical problem for surface combatants and could be a decisive factor in a fight over Taiwan.

Aside from IR-17, a separate but similar example of this capability is the Spynel system from the company HGH, which is headquartered in France. Spynel provides 360-degree warning, target discrimination, and tracking through high-definition thermal imaging. HGH’s offering also provides enhanced situational awareness overall, and its automatic target identification and classification data feed directly into the ship’s combat management system. Similar systems are deployed on land, too.

Another French defense technology company, Safran, produces the VAMPIR NG, among others, which boasts many of the same features as both IR-17 and Spynel that are ideal for detecting a similar breadth of threats. The company explicitly states that VAMPIR NG is designed to be complementary to the ship’s radar by offering its own situational awareness contribution, and notes that rigid inflatable boats and small drones are part of its tracking portfolio.

Distributed aperture systems, very loosely similar to what’s found on the F-35 and will soon be aboard many other aircraft, that use staring optical arrays located around a ship instead of single spinning ones, are becoming an even more capable alternative, at least in some respects, to panoramic IRSTs. The video feeds provided by the array of cameras are stitched together to provide a seamless and constant video feed in every direction around the ship.

This can be leveraged in many ways, providing tactical and navigational warning, sensor cueing, and situational awareness data. The visuals these systems gather can even be displayed in a 360-degree fashion or in augmented reality-like interfaces, beyond a more traditional console. Northrop Grumman’s Silent Watch is one such system, but there are others, and the latest classes of warships are starting to leverage this capability.

A staring DAS-like system replaces the old island camera room enclosures on U.S. supercarriers for recording flight deck operations. This is in addition to the supercarrier’s many narrow field-of-view FLIR systems. You can read all about this in a past War Zone feature, here. China’s system could provide some secondary flight-deck recording, too, but it would not be as capable as the staring arrays on the purpose-built U.S. Navy system for this application.

The existence of this type of system on China’s carriers should come as no surprise, but it does underline how seriously they take the threat of stealthy anti-ship missiles and potentially swarming attacks by small boats and drones. And the U.S. and its allies do not have a monopoly on stealthy cruise missile design and especially not on small drones and swarming boats, so panoramic infrared systems will only become a more familiar feature on warships as time goes on.

The post This Spinning Camera On China’s Aircraft Carrier Is A Key Defense System appeared first on The Drive.