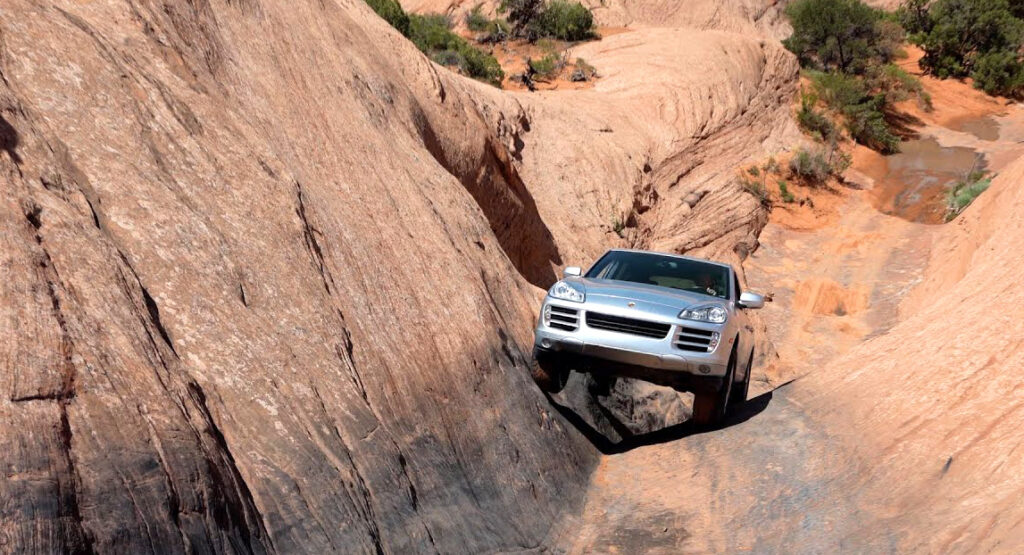 The Porsche Cayenne has typically been marketed primarily as a utility vehicle with the road manners of a sports car, but those in the know are aware of it off-road potential, especially the first-gen model. With a V8, a center-locking differential, adjustable air suspension, and low-range gearing, the SUV had a surprising amount of off-road chops, and one YouTuber was able to truly put them to the test.

To do that, Harrison Schoenman took his 2008 Cayenne S to Moab, essentially the Nurburgring of off-roading, equipped with nothing more than a set of 32-inch all-terrain tires. Other than that new rubber, the SUV was completely stock.

At the beginning of the outing, the Cayenne did have some wheels in the air at times, but that didn’t stop it. It showed impressive descent control on smooth, slippery surfaces, and held its own quite nicely on the looser surfaces where those all-terrain tires were really able to dig in. It also managed to tackle some fairly technical obstacles in addition to the general rough terrain, putting its surprisingly impressive approach angle to work.

Next up was the infamous Hell’s Gate. At this section of the trail, which was much more technical and complex, a bit more thoughtful vehicle placement was necessary, but the Cayenne did it with little to no fuss. The whole thing goes to show what you can accomplish with solid machinery and a little bit of skilled driving.