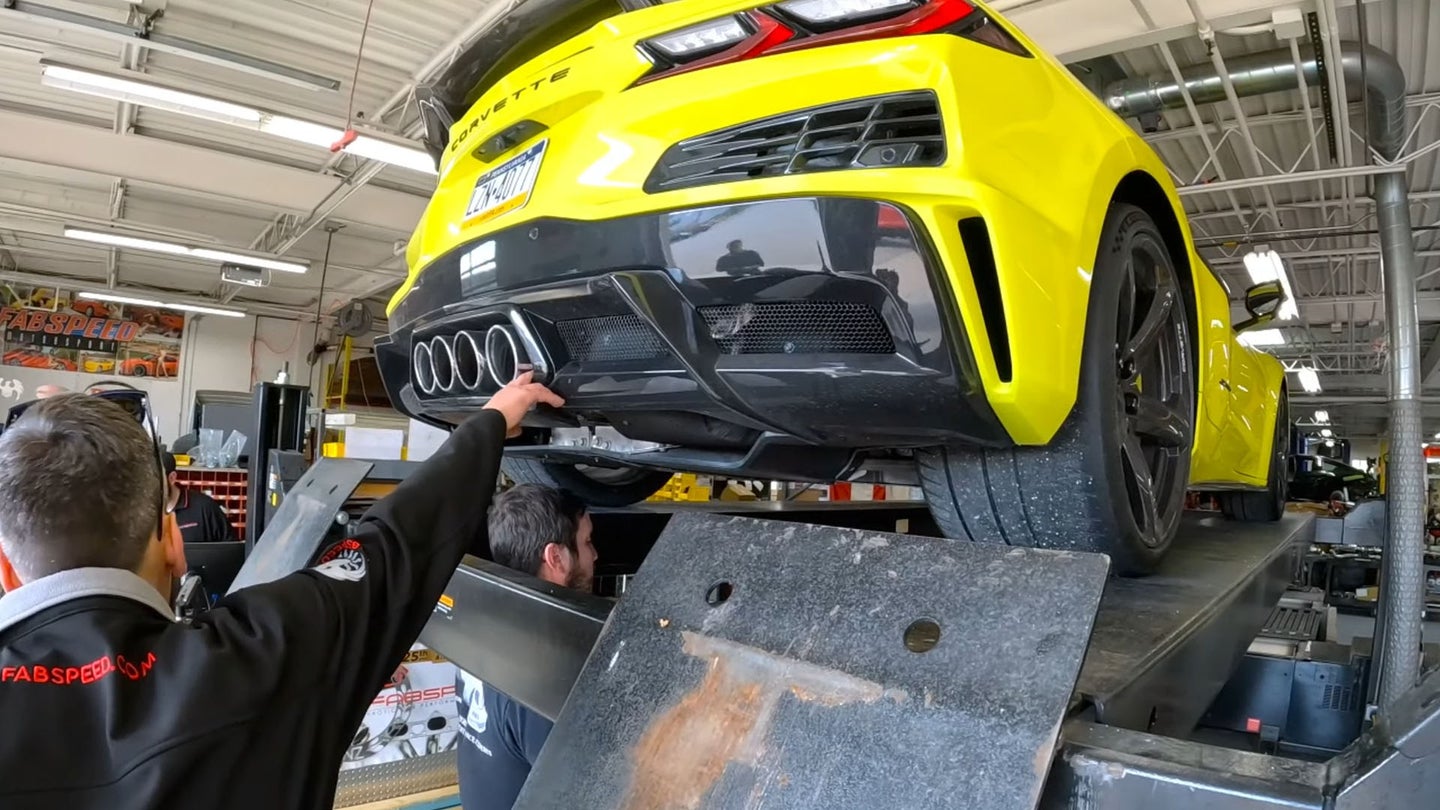 Cutting the mufflers off a Corvette is nothing new. It probably happens multiple times per second. Straight-piping a new, flat-plane, 5.5-liter 2023 Corvette Z06 has yet to happen as far as we know, though. That has just changed.

Remember that YouTuber who jumped a creek in his Ram TRX and then got fined by the state of Pennsylvania for the stunt? Would you believe me if I told you he is the one who straight-piped his Chevy Corvette? Yes, he managed to sneak out of his packed schedule of Mensa meetings to get a hold of a new Z06 and saw the mufflers off. Well…not exactly. He’s actually having a shop, Fabspeed out of Fort Washington, Pennsylvania, install a set of high-flow catalytic converters and remove the offending exhaust silencers.

The long video’s title contains the words “WORLD’S FIRST STRAIGHT PIPED C8 Z06.” We actually only get a few seconds of the car revving without its factory exhaust system, though. These precious seconds are at the very end, of course. Here’s that part, timestamped for your convenience.

It’s admittedly worth watching the whole video to see that little clip. The noise is unbelievable. General Motors likely couldn’t release this F1 V8-sounding engine in this state for a good reason. It’s definitely too loud to be legal, and with the high-flow cats, the emissions might get sketchy. Not all aftermarket cats are made equal.

The Z06 still sounds good stock, but sawing off the mufflers gives it that high-pitched scream that it’s missing from the factory. It revs to 8,600 RPM, sure, but it doesn’t really sound like it.

The car also gets dynoed with its factory exhaust still attached, and it makes 640 wheel horsepower. That would seem to indicate that the Z06’s powerplant, the LT6, could really be making more than the 670 crank horsepower the automaker claims. That’s not really here nor there, though.

Will we see more straight-piped Z06s? God, I hope so. And if the rumors about a potential twin-turbo version of the LT6 are true, I want to get the mufflers off of that thing as well.

The post This Straight-Piped 2023 Chevy Corvette Z06 Screams Like an F1 Car appeared first on The Drive.