This Was The Biggest Planned Explosion In Warfare Before Hiroshima 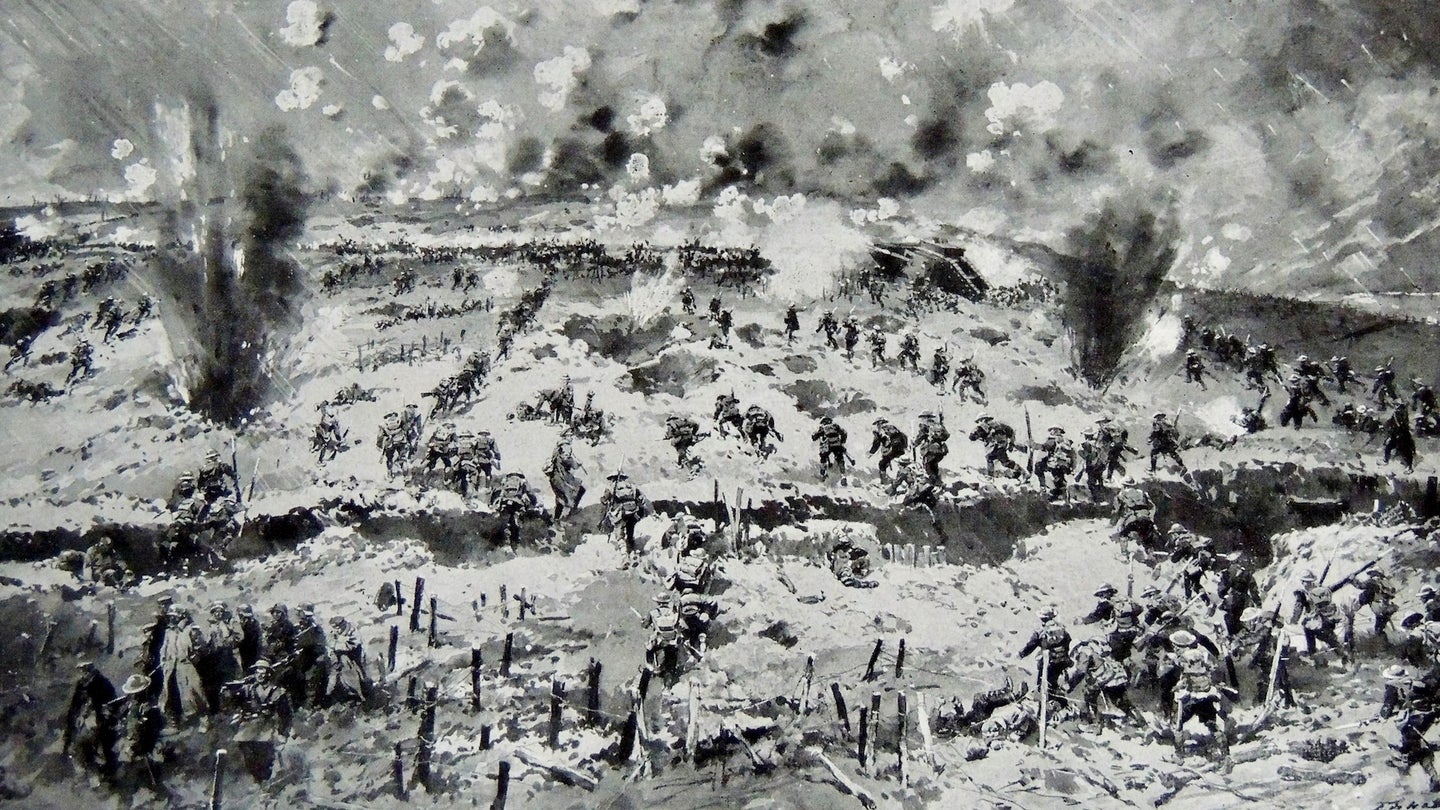 June 7, 1917, marked the beginning of the ​​Battle of Messines during World War I, today one of the lesser-known battles of that conflict. A relatively short campaign lasting just one week (June 7-14), the ​​Battle of Messines was part of a wider effort by Allied forces to splinter German forces in West Flanders. It was launched by detonating multiple large explosives – a total of 19 mines were set off from 26 that were prepared – along a ridge outside the Belgian village of Messines, targeting the German 4th Army. The resulting blasts have often been described as the biggest explosions in the history of warfare until the first atomic bomb was dropped on Hiroshima in 1945. But was this really the case?

In 1914, German forces captured Messines Ridge, located to the south of Ypres. This afforded them a strong position overlooking the Ypres Salient, resulting in high casualty rates for the Allies.

After several years of attrition trench warfare on the Western Front, little progress had been made by Allied forces against the German Army (or visa-versa), with Ypres in Belgium becoming an area of stalemate. As such, the British High Command orchestrated plans to seize control of the area for good — starting with a bid to capture Messines Ridge.

The offensive action was the product of lengthy planning. In January 1916, British Gen. Sir Herbert Plumer (commander of Britain’s Second Army since May 1915) recommended to Field Marshal Sir Douglas Haig that capturing the ridge should come as part of a wider strategy in targeting various German-held positions in the area.

Plumer decided that mine warfare should be used to quickly gain an immediate advantage as the battle began. Tunneling work beneath the ridge in anticipation of the offensive began in 1916 — wider Allied tunneling in the Salient had actually already begun by this point, having started in early 1915. As historian Edward Ross notes, British mining companies excavated four and a half miles of tunnels, some as deep as 300 feet and over a mile long, in anticipation of the offensive. Working in the tunnels was extremely dangerous; fatalities were often caused by shafts collapsing due to excavation or explosives equipment malfunctioning.

While initial plans for the offensive were discussed in early 1916, it was not until early 1917 that they were revisited by the British, as the offensive was delayed due to the impact of the Battle of the Somme, which lasted from July to November, 1916. Moreover, it was not until May 1917 that Field Marshal Haig authorized the plans for Messines Ridge, with the battle beginning in the early hours of June 7.

The largest of the 19 mines detonated on June 7, 1917, was located just over three miles south of Ypres at St. Eloi. The detonation of the St. Eloi mine occurred at 3:10 AM, with the others following just a few seconds apart from each other. Taking 30 soldiers three weeks to transport and ready, the St. Eloi mine alone comprised 95,600 lbs of explosives and was, according to available information, the single largest mine to be detonated during the operation. Of course, mine warfare was an important component of the war before Messines Ridge, having been used during the Somme offensive and the Battle of Vimy Ridge in April 1917 – but these operations were dwarfed in terms of the explosive force unleashed.

Other mines detonated by the British weren’t far behind in terms of estimated size. The blast at Spanbroekmolen, located at one of the highest points on the Messines Ridge, had an explosive charge of 91,000 lbs, forming the “lone tree crater” which measured 250 ft in diameter with a depth of 40 ft. Moreover, the explosion at Maedelstede Farm measured 94,000 lbs. As Gen. Sir Charles Harrington, Chief of Staff of the Second Army, wryly indicated the evening before the offensive began: “I don’t know whether we are going to make history tomorrow, but at any rate we shall change the geography.”

In total, over 455 tons of explosives were detonated under German positions on June 7 — resulting in the destruction of large sections of the German front line and support lines. The roughly 7,200 German soldiers that survived were the fortunate ones. Later estimates suggest that the 19 successful mine detonations killed as many as 10,000 German soldiers that day. According to Mining Magazine, the detonation of the mines holds the dubious record of killing more people than any other non-nuclear man-made explosion in history.

Accounts of the explosion at St. Eloi from the front line underscore the intensity of the blast. Patrick Carroll, who served with the Royal Dublin Fusiliers (RDF), recalled after the war that the explosion was the “most terrible I ever heard of or seen.”

“The earth, where we were, trembled. Everyone was knocked up against everyone else. It was worse than an earthquake. My own reaction that morning was that the German Army had sprung the mine on us and we were all going to be swallowed up in the bowels of the earth, buried alive.”

Indeed, the collective impact of the blasts was so great that they were reportedly heard as far away as London and Dublin. It was also said that the then British Prime Minister, David Lloyd George, also heard them from London, around 160 miles away.

The British plan to use land mines in retaking Messines Ridge was, without question, successful. Some 80,000 Allied soldiers were maneuvered into position before the blasts. Although much of the British Second Army (which was made up of Australian, New Zealand, Canadian, and British troops) struggled to see through the resulting debris, two hours after the explosion at St. Eloi, Ulster regiments from the 36th Division had completed their second objective. By 7:00 AM, soldiers from New Zealand successfully captured Messines, with a ‘creeping barrage’ of artillery support. But did the combined explosive force constitute the biggest recorded blast prior to 1945?

While it’s possible the blasts were the biggest deliberate or planned explosions to date as of June 1917, other, accidental explosions during the war seem to have been larger. On December 6, 1917, the French vessel Mont Blanc accidentally collided with the Belgian relief ship Imo, in Halifax Habor, Nova Scotia, Canada, and exploded with the equivalent force of 2.9 kilotons. In another wartime accident, on this occasion during World War II, an underground munitions storage depot at RAF Fauld, England, saw 3,700 tons, or 3.7 kilotons, of bombs explode en masse — leaving a crater that was 130 feet deep and 0.019 square miles.

Part of the problem also relates to the way explosions themselves are measured. As explosions are gauged by how many tons of TNT (or trinitrotoluene) it would take to produce a projection of energy (1,000 tons equals one kiloton), as Chris Smith at Gizmodo indicates, their measurement is fairly arbitrary. Depending on the quality of the TNT, the energy released from a TNT explosion might range from 2,000 to 6,000 Joules (scientists use a constant 4,184 Joules per-gram to represent that range).

Explosions also don’t generate an easily recordable and consistent type of wave, with TNT behaving differently to the kinds of explosives that ignited in Halifax Harbor or at RAF Fauld, for example. Comparisons between explosions are also tricky because various factors can influence the levels of energy they produce, including proximity, quantity, containment, preheating, and external oxygenation.

None of the explosions mentioned above came anywhere close to the blast force of the atomic bombs dropped on Hiroshima and ​​Nagasaki in early August 1945. Here, it’s been estimated that the blasts were equivalent to the explosive force of 13 kilotons of TNT and 21 kilotons of TNT respectively. Much larger, non-nuclear blasts have also been recorded post-1945. A test on June 27, 1985, called Minor Scale, at the U.S. Army’s White Sands Missile Range in New Mexico involved the detonation of 4,744 tons of ammonium nitrate/fuel oil (ANFO) explosive. Yet while the prize for the largest, non-nuclear explosion in wartime remains up for grabs, it certainly seems that the 19 mines detonated at Messines Ridge was the largest planned explosion in combat prior to 1945 – or at the very least, is the top contender for that title.

The post This Was The Biggest Planned Explosion In Warfare Before Hiroshima appeared first on The Drive.