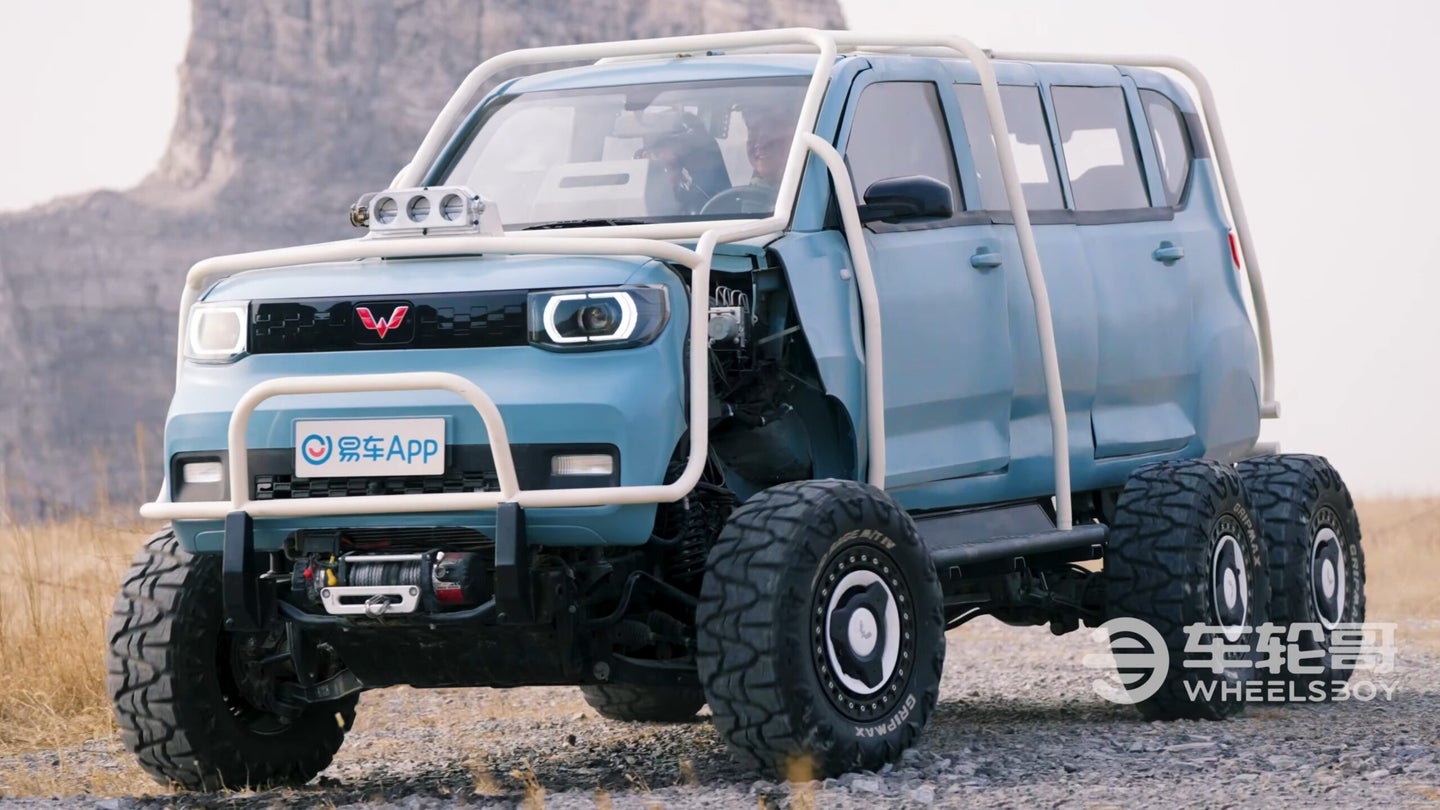 One Chinese garage decided to turn the country’s best-selling EV into a jacked-up six-wheeled off-roader. The resulting build is janky, hilarious, and fun, as shared by Wheelsboy on YouTube.

The build is the work of YiChe Garage, which found itself with a Wuling Mini EV microcar kicking around without a purpose. Regulations had changed in Shanghai, with only longer vehicles being eligible for certain government subsidies. That led to many Photoshopped images of lengthened Mini EVs, and YiChe decided to build one for real.

Thus, the microcar’s body was cut up and dropped on to a Great Wall Cannon pickup truck chassis. The front clip and rear end are most intact, but much of the rest of the body is all-new. The lengthened body now features two sets of gullwing doors and three rows of seating, though cargo storage in the back is as per the original car.

Notably, there’s no hood or front fenders. They were left out to allow the Cannon’s longitudinal front engine to fit. The original electric drivetrain of under 50 horsepower is gone, with the pickup’s 2-liter turbocharged gasoline engine good for 197 hp.

The truck isn’t a true 6×6 by any means. It’s essentially a regular Cannon pickup with an extra axle stuck on the rear for looks only. There’s a driveshaft hooked up that appears to turn, but nothing’s actually connected. While the original Mini EV rode on 12″ wheels, this build rolls on 17″ rims with mud tires. The original Wuling wheel covers are in place, though, to maintain the right aesthetic.

Other touches include a winch and a fake supercharger-style intake hood. There’s also an exoskeleton rollcage which helps hold the body together.

Impressively, many of the Cannon’s features are still present and functional. The infotainment system and air conditioning both work as intended. The automatic gearbox doesn’t shift properly, though, with the driver required to command changes via the steering wheel paddles. However, the shifter is mounted on the roof, which is basically the coolest thing ever.

The vehicle is in rough condition, having been left to sit for some time. It’s a janky build, too, with plenty of body flex, dodgy checkerplate panels, and rusty water dripping from the roof lining. There’s plenty of shakes and rattles in the cabin, and the body roll and chassis flex around corners is significant. Regardless, it’s clearly a lot of fun to look at, even if it’s not a lot of fun to drive.

We’d love to see a more premium version of the same build. It would be even better with electric motors driving all six wheels instead of the hacked-up pickup truck drivetrain. We suspect demand in China for six-wheeled off-roaders is low, so don’t expect Great Wall nor Wuling to rush such a vehicle to market. With that said, it never hurts to dream.

The post Tiny Chinese EV Turned Into a Big Fake 6×6 Truck appeared first on The Drive.