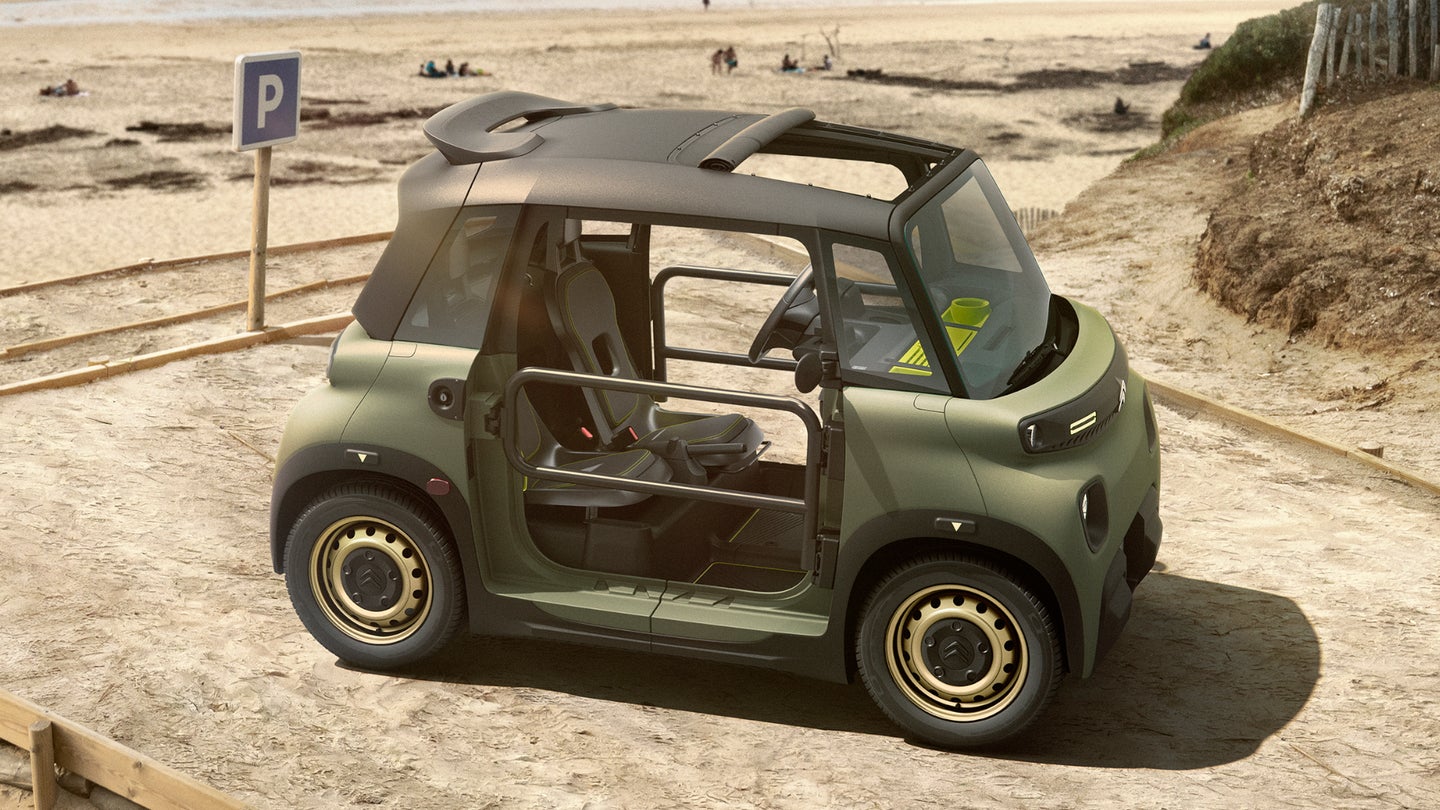 After Citroen received a rousing response to its My Ami Buggy concept in December last year, the company has decided to put a limited-edition version into production.

It’s based on the Citroen Ami, which is classified as a light quadricycle in the EU. It’s a special vehicle category for lightweight microcars, and in France, they can be driven by those 14 years of age or older. To comply with these regulations, the Ami is limited to a top speed of 45 km/h. Drive is thanks to a 6 kW electric motor, the maximum permissible amount, and unladen weight of the vehicle is 425 kg, sans battery.

The My Ami Buggy concept took the humble microcar and jazzed it up with a safari-themed build. As seen in December, the Buggy had its doors removed, and got a eye-catching fluro yellow interior treatment to boot. Chunky off-road tires were fitted, along with a light bar, and the front and rear lights were given protective wire covers.

The limited-edition production version sticks to the same vibe. To maintain the glorious open-air experience, it features metal tubes in place of normal doors, akin to those you might see on a Ford Bronco. The roof gets a removable top, too, in a nod to the 2CV and Mehari, which can be stashed behind the seats when not in use. There’s also a fetching wing on top, and the front and rear bumpers have been remodelled from the base Ami for a more rugged look.

Other features have been mellowed slightly from the original concept. The chunky offroad wheels are replaced with a regular set of road tires, though it still rolls on fetching gold wheels. The lairy fluoro interior is also gone, with just a few searing Citric Yellow highlights on the dash, front fascia, and above the wheel wells. The rooftop lightbar has also been deleted, along with the bar work and headlight grilles previously seen front and back.

Overall, though, it looks like one of the hippest quadricycles out there, and a range of 47 miles gives it plenty of legs to roam. It’s hard to imagine a cooler electric vehicle for cruising around a small French coastal town. Even moreso if you’re 14! After all, it sure beats getting dropped off at the beach in your parent’s minivan.

Citroen will sell just 50 examples of the My Ami Buggy, to be sold via a dedicated online site. Purchasers will be treated to VIP home delivery starting from August 8. If you’ve got a French teenager desperate for some automotive freedom, or you’re just a really cool grown-up that digs the buggy vibe, you’ll want to get your order in quick.

The post Tiny Citroen Buggy Delivers Beach Vibes With No Doors, No Roof appeared first on The Drive.