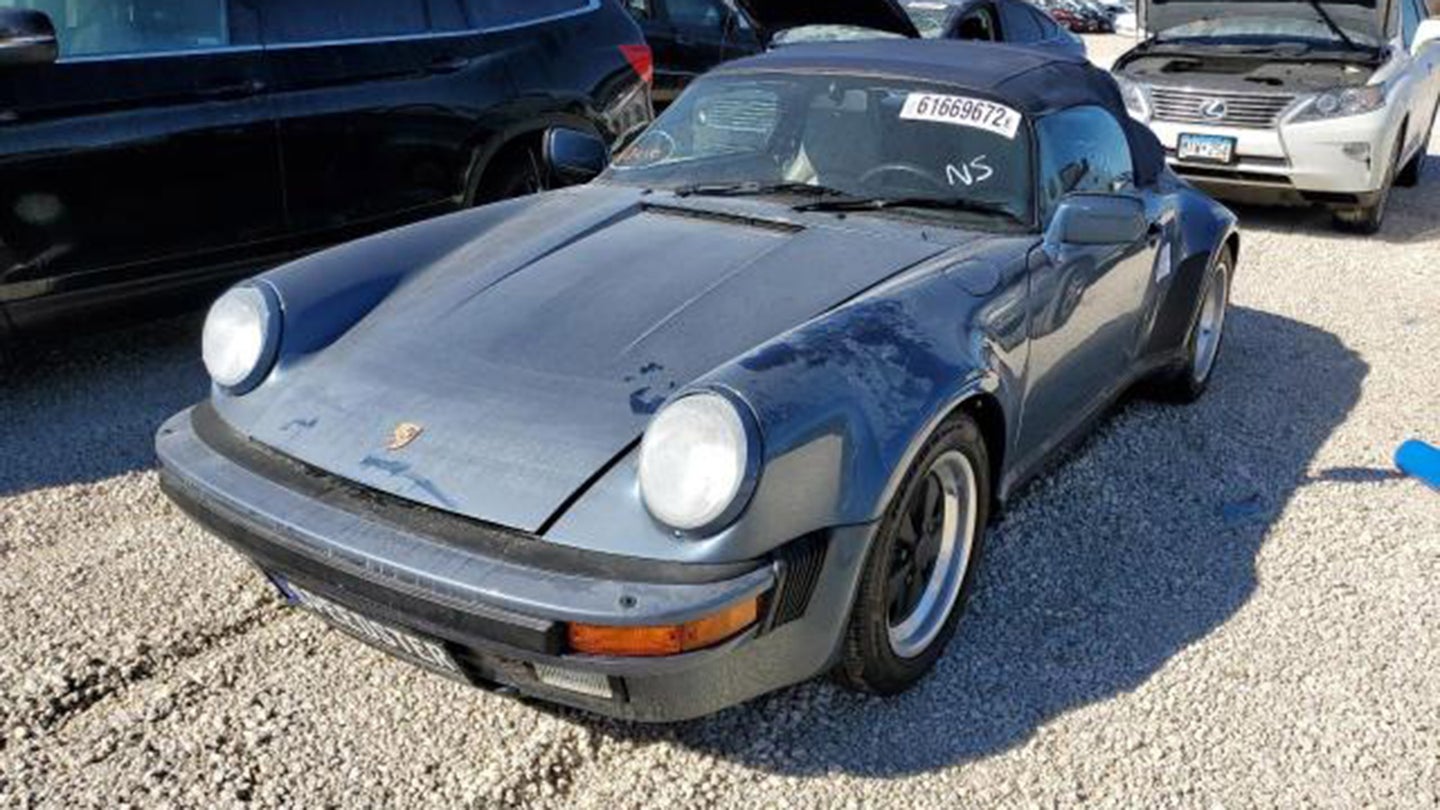 If one washed-out Porsche 911 Carrera is sad, then two must be heartbreak. Three? That’s just a shame. A damn shame, at that.

That’s exactly how we felt about these three Porsche 911s listed on Copart in Florida. Granted, we’re not entirely sure if they’re flood damaged for a reason that starts with “I” and ends with “an.” (Note to readers: Broken Porsches are sad. Fatal hurricanes are tragic, we know.)

Nonetheless, we have three examples of Stuttgart’s finest, brought to heel by Mother Nature. First is a Miami Blue-appearing, recently flooded 2019 Porsche 911 Speedster. The listing shows 0 miles on the clock and an automatic, but neither is true. When it was released, all Speedsters were 502-horsepower 4.0-liter howling flat-sixes mated to a six-speed manual, and for the mileage? Every one of the 1,948 Speedsters better have break-in miles or more, otherwise what are we doing here?

The news doesn’t get much better. A 1989 Speedster with 17,786 miles on the clock in what looks like Marine Blue is in rougher shape. The visible water line is higher, and the white leather hides inside look like they’ve seen much better days. Likely one of only 832 examples imported to North America, and the last blast for the 1980s Porsches that are so highly coveted now. This example may be one of the more popular versions of the 1989 Speedster that used more panels from the 930 Turbo, but it’s still powered by a 231-hp 3.2-liter flat-six mated to a manual transmission. The mats and toolbox look to be intact, albeit flood damaged. Dang.

The third Speedster is of the 2011 varital and one of the toughest to see. The 408-hp flat-six married to an automated PDK falls into the middle between the prior two, but its 3.8-liter soundtrack is among the best. One of only 356 examples, it’s the most rare among the other two, but it’s also one of the toughest to see. Despite its $205,000 price tag when new, it’s the one that looks the most ready for prime time, although its flood tag will tarnish its luster going forward.

All three have two things in common: They were all homages to Porsche’s original 356 but done in different ways from different eras. The second? All three water-ruined sports cars are shames. Damn shames.

The post Trio of Flooded Porsche Speedsters on Copart Are Just Waiting to Be Saved appeared first on The Drive.