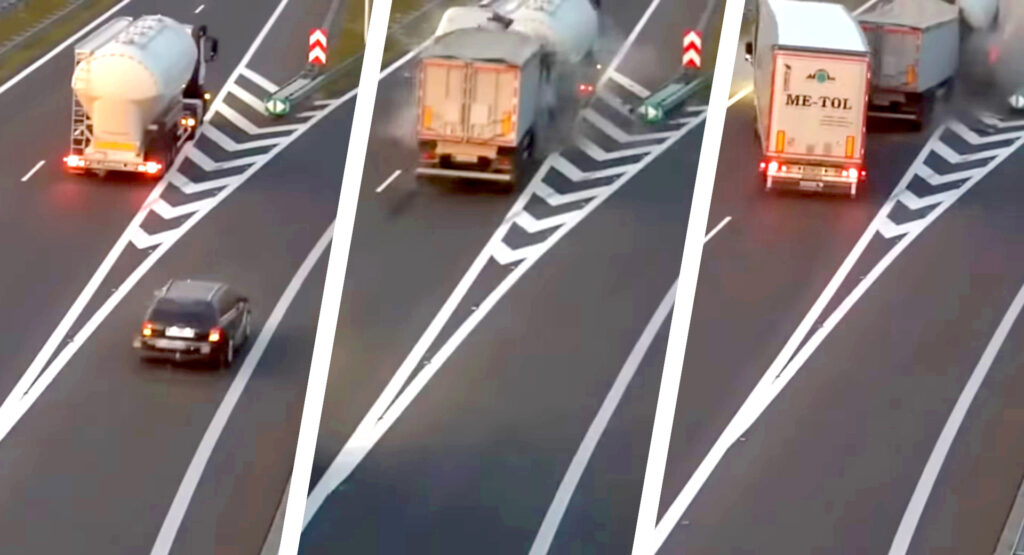 The highway is usually a stress-free environment for truck drivers, but things can go really wrong as proven by new video footage coming from Poland. It all started when a truck driver came to a full stop in the right lane just after missing an exit, causing a terrifying accident that involved two other trucks.

The video shows the first truck coming to a full stop on the highway. A few seconds later, another truck approaches at high speed, and without enough time to brake, it rear-ends the stationary vehicle.

As this wasn’t enough, a third truck approaches from a small distance, but thankfully this driver managed to avoid the collision by successfully practicing an emergency maneuver. The vehicle scrapes its trailer but avoids any serious damage. The traffic wasn’t that heavy at the moment of the incident, which helped avoid a pile-up.

We don’t know the reasoning behind the first trucker’s decision to stop, but it seems that they missed the exit and somehow thought it would be possible to save it at the last minute. Stopping – let alone reversing – on a high-speed road is among the worst things a driver can do, as it creates a high-risk situation for many unsuspecting people. Professional drivers should be the first to know that, having seen many dangerous acts from other road users while sitting behind the wheel.

The camera footage reveals that the accident occurred on September 3rd. According to local news agency lublin112, it took place near the village of Dąbrowica in Poland, on the road towards the city of Lublin. Despite the severity of the crash, there was only one injury reported. Watching the deformation of the truck’s cabin and considering the inertia of the truck’s trailer, it is a miracle that the driver escaped death. Thankfully, sophisticated ADAS in future trucks might help reduce this kind of accident by detecting and avoiding obstacles on time.