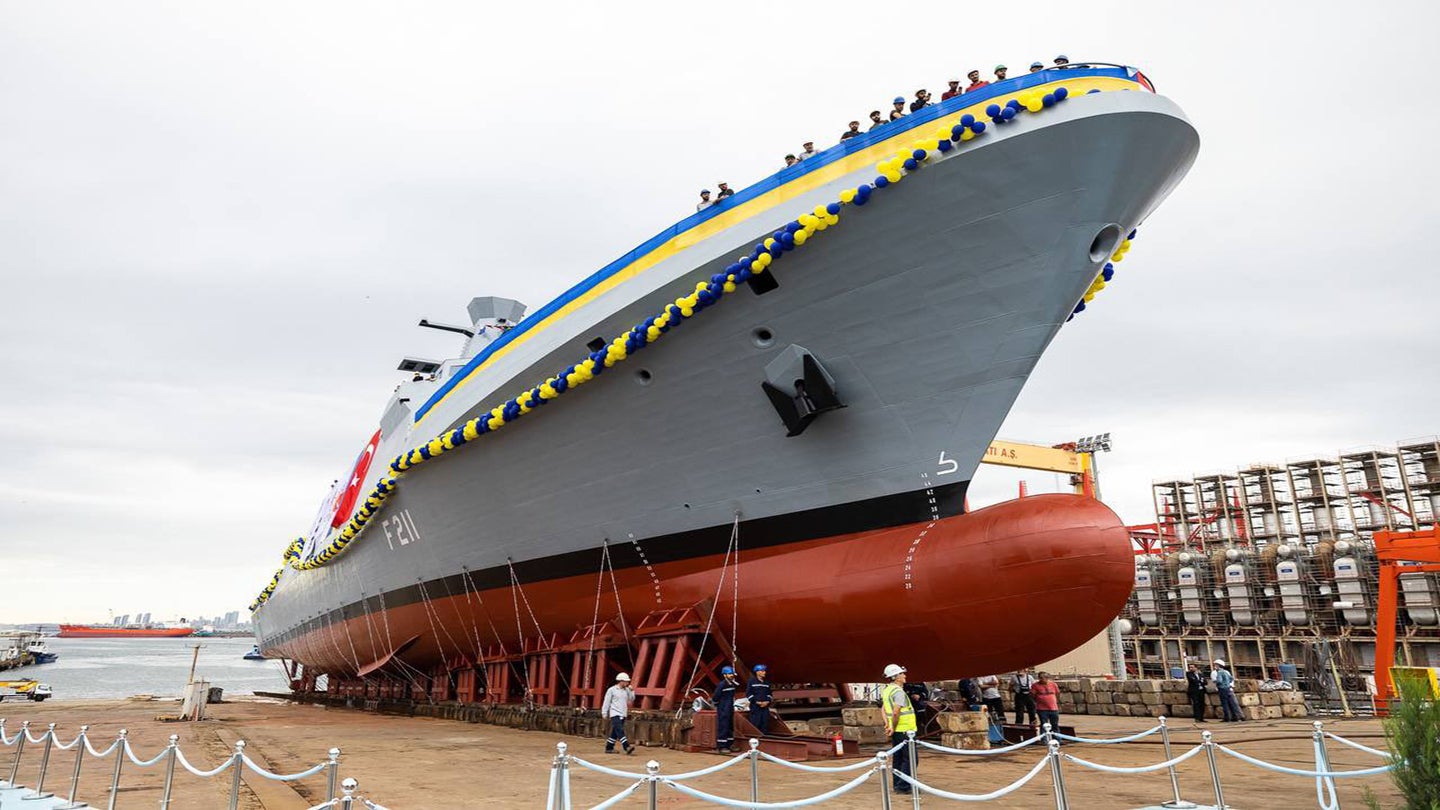 A Turkish Ada class corvette eventually bound for Ukraine was launched Sunday at the RMK Marine shipyard in Istanbul Turkey during a ceremony attended by Olena Zelenksa, wife of Ukrainian President Volodymyr Zelensky.

While Ukrainian officials are lauding the launch, the corvette – which Zelensky last year named Hetman Ivan Mazepa in honor of Ivan Stepanovych Mazepa, a Ukrainian Cossack military leader – will not be delivered until at least 2024, according to Zelensky’s official website. There are also questions as to the relevancy of such a large ship not just under the current circumstances — Ukraine’s Navy is basically decimated — but even when they do finally arrive.

When finished, the Hetman Ivan Mazepa is expected to be a 2,400-ton displacement, 326-foot-long vessel capable of a top speed of 29 knots with a range of about 3,500 nautical miles at 15 knots. It has a hangar and deck for a helicopter and UAVs.

Categorized as anti-submarine corvettes, Ada class vessels “are designed to conduct operations in the coastal zone. They are capable of conducting anti-submarine warfare and patrolling in the open sea,” according to Zelensky’s official website.

Ukraine’s First Lady “became the godmother of the ship,” Ukrainian Defense Minister Oleksii Reznikov said in a Tweet. “With a ship like this, our Black and Azov seas will be safe. P.S. The future base port is Ukrainian Sevastopol.”

A two-ship deal was signed in 2020 for $256 million, well before Russia launched its all-out invasion on Feb. 24 of this year, but after Russia captured three Ukrainian warships in the Sea of Azov in November 2018.

At the time the deal was signed, there was a plan for outfitting the ships with armaments, air defense systems, radars and other sensors, according to Naval News, citing Radio Svaboda, a U.S. government-funded Ukrainian language outlet operating under the umbrella of Radio Free Europe/Radio Liberty.

The plan, released by the Ukraine Defense Ministry, called for the ships to be equipped with RGM-84 Harpoon anti-ship missile systems “as their primary strike system.” Ukraine was also considering the “indigenous Neptune anti-ship missile, as well as the Harpoon, Atmaca, and Naval Strike Missile.”

Naval News also noted that the mockup presented by the company to Zelenska “is fitted with Aselsan-made Gokdeniz close-in weapons systems (CIWS), while previous statements were suggesting Rheinmetall Oerlikon’s Millennium 35 mm CIWS for the corvette.”

Andrii Ryzhenko, a retired Ukrainian Navy captain and an expert with the Centre for Defense Strategies, a Ukrainian think tank, told The War Zone Monday morning that no final decisions have yet been made about how the Hetman Ivan Mazepa will be outfitted.

And, given the Russian Navy’s still-capable Black Sea Fleet, Ryzhenko downplayed the delivery of just two Ada class corvettes even if they arrive in time to assist Ukraine’s defense.

“If it’s one it means almost nothing,” he said. “Even if it is two it means nothing.”

Another concern is the ability of Ukraine’s defense industry to help outfit the ships.

“It was promised that Ukrainian industry will be involved and I’m not sure how we’ll be able to contribute to the building of the corvette because our companies are in Nikolayev now. They’re not in a position to do anything because every day Russians are firing missiles on our Nikolayev facility. Every day, including today. They are using S-300s and they are using Iranian-made drones – Kamikazee drones like the Shahed-136.”

We covered the Iranian drones Russia is using in Ukraine in an in-depth report you can read here.

Ryzhenko also questioned the resources expended on the vessels, given how much else Ukraine needs in its fight against Russia.

“It’s not the priority capability which we need now,” he said. “Unfortunately, we used a lot of resources for this capability.”

Ukraine has lost most of what little naval power it possessed. In March, it scuttled the flagship of its fleet, the Krivak III/Menzhinskiy class frigate Hetman Sahaidachny (U130), which was equipped with a 100mm deck gun, smaller guns, anti-submarine grenade launchers, torpedo tubes, and a helicopter.

Around the same time, Russia sunk the Ukrainian Navy patrol boat Sloviansk, which was a former US Coast Guard Island-class patrol vessel transferred to Ukraine in 2019.

The launching of the Hetman Ivan Mazepa is just the latest manifestation of a growing relationship Ukraine has with Turkish arms makers, especially the manufacturers of the Bayraktar TB2 drones, something Zelenska noted in her speech during the launch ceremony.

“I brought you greetings from Ukraine,” Zelenska said. “The country where every adult and every child knows the Turkish word ‘Bayraktar’ and has been pronouncing it with gratitude during the months of Russian aggression. This is not an exaggeration. We feel you next to us, we feel your help. We know that we have common values ​​– we are now defending from the invader what is most important for every person – our home, family, right to language and country.”

Zelensky also lauded the company and Turkey’s military assistance and noted that the company that makes the Bayraktar drones are working to set up a facility in Ukraine.

“We are preparing to create a training center and a plant of the Baykar company in Ukraine, as well as joint manufacturing of aircraft engines. We will definitely implement these projects,” he said.

But while the TB2 drones continue to play a key role in the fight against Russia, it remains to be seen what, if any role, the Hetman Ivan Mazepa will. While the Ada class corvettes can potentially offer Ukraine, which essentially has no navy, greatly increased littoral capabilities, just how much of a difference they will make – especially since the first won’t even be on station for another two years – remains an open question. And even if they do get pressed into service in time to face off against Russia, the likelihood they will survive for long is very questionable. They would rise to the top of Moscow’s target list.

What is not in question, however, is Ukraine’s need to rebuild its defense capabilities in the future no matter how this current conflict plays out. This takes time as things like ships take years to build, outfit and put into operation.

“Ukraine has always been and will be one of the European centers of the military and aviation industry,” Zelensky said Monday. “And I am proud that I can say these words with absolute confidence and justification based on the results of the 221st day of Russia’s full-scale war against our state.”

The post Turkey Launches 326-Foot Warship For Ukraine, Won’t Arrive Until 2024 appeared first on The Drive.