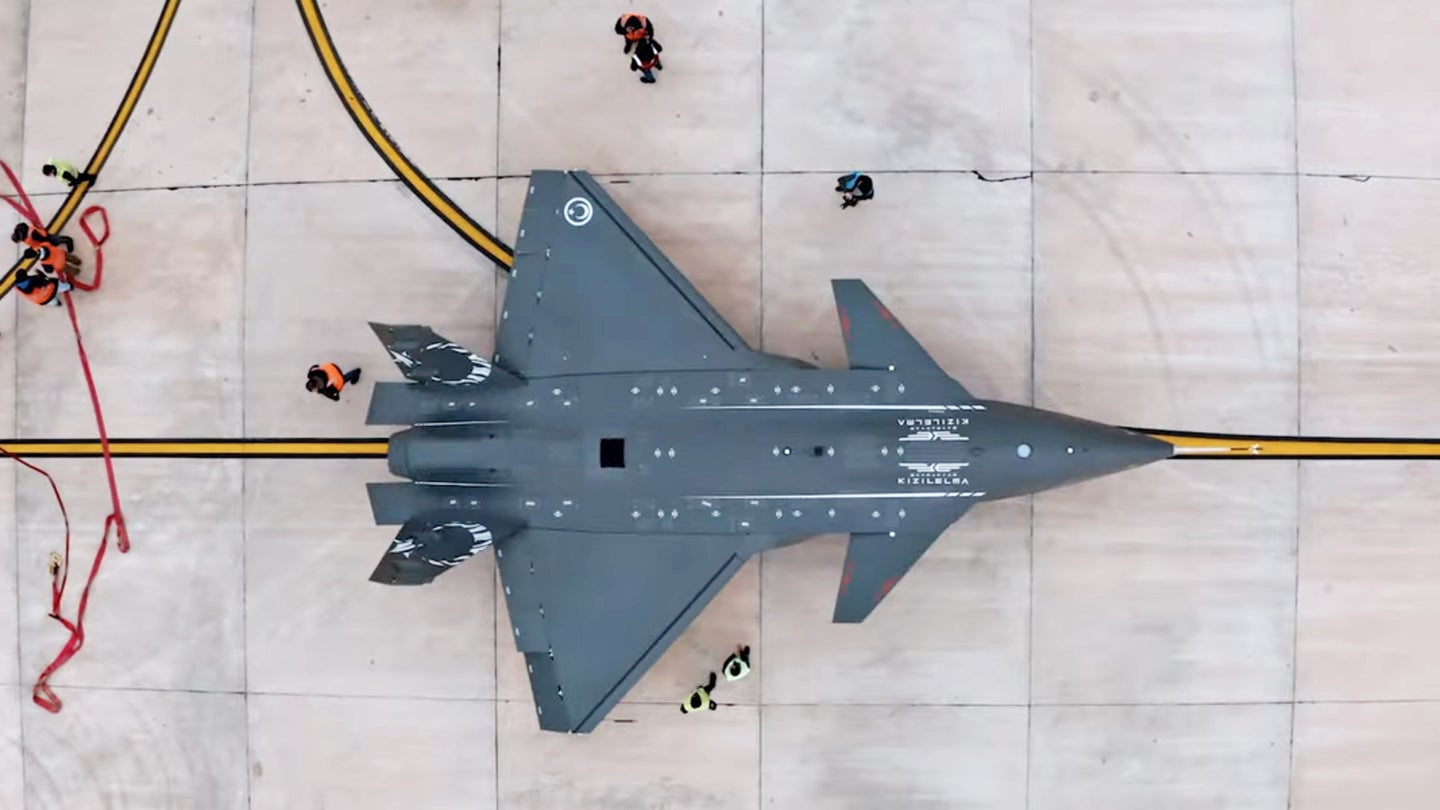 Turkey’s Baykar company has begun ground tests of its Bayraktar Kizilelma drone, described as the country’s first unmanned fighter aircraft. Accompanying imagery of the tests, at the Akinci Flight Training and Test Center in the northwestern province of Tekirdag, which included taxi runs ahead of its first flight, provide us with our best look so far at this unique uncrewed air vehicle. This would appear to be aimed at a range of combat roles and which is also supposedly being developed for operations from aircraft carriers.

The Kizilelma — meaning Red Apple in Turkish — has been developed by Baykar, which is responsible for the Bayraktar TB2 that has seen notable combat success in the hands of Azerbaijan and Ukraine, as well as the larger Bayraktar Akinci. The Kizilelma is a very different proposition, however, claimed to be supersonic (at least in later versions), having a degree of reduced-observable characteristics, and tailored for the kinds of air combat missions typically undertaken by manned fighter jets.

Powered by a single Ukrainian-designed Ivchenko-Progress turbofan engine, the Kizilelma has a canard-delta configuration, of the kind seen on some other reduced-observable combat aircraft designs, including China’s J-20 manned fighter and mysterious Dark Sword drone. The use of canards is a tradeoff between low observability and maneuverability, although some measures can be taken to limit their impact on radar signature. The tail surfaces consist of canted vertical stabilizers.

According to the technical requirements, the Kizilelma should have an endurance of five to six hours, a combat radius of 500 nautical miles, and a service ceiling of 35,000 feet. Maximum takeoff weight is 13,228 pounds, including a payload of 3,306 pounds. That payload will include disposable stores carried in an internal weapons bay, further preserving its stealth characteristics. Weapons are likely to include examples of the wide range of air-to-ground precision munitions and air-to-air missiles developed by Turkish industry.

Even with the non-afterburning engine, the Kizilelma should offer impressive performance for a drone, with a maximum speed close to Mach 1. Ultimately, there is a plan for a twin-engined version, with a pair of AI-322Fs, for further improved performance. In its initial form, the engine exhaust is decidedly non-stealthy, although it’s feasible that low-observable characteristics could be improved by refining this area, something that Russia is doing with its Okhotnik drone. But really, this aircraft has features to reduce its radar cross-section from certain angles, such as the fuselage chine lines, but clearly, high performance has been weighted more heavily than low observability. This is not something that we see typically in UCAVs, with the possible exception of the MQ-28 Ghost Bat, at least to some degree.

In contrast to the TB2 and Akinci, the fast and high-flying Kizilelma is planned to have an air-to-air combat capability, as well as conduct intelligence, surveillance, and reconnaissance (ISR) and strike operations. Few details, however, are available of the avionics and overall mission architecture that will be required to conduct counter-air missions, let alone more straightforward functions. Reportedly, the drone will be fitted with some kind of active electronically scanned array (AESA) radar.

More broadly, it’s unclear if the overall concept of the Kizilelma is based on a ‘loyal wingman’-type drone companion to manned fighters, or if the drone will be controlled from a ground station, or even if it will be expected to shoot down hostile aircraft with some degree of autonomy. The latter point is one that the U.S. Air Force, in particular, is now grappling with, as you can read about here.

The development of the Kizilelma began as long ago as 2013, although the project was only revealed to the public in July 2021, when conceptual studies were presented. The first flight is scheduled to take place next year. That goal would seem achievable, based on the fact that a prototype is now undergoing ground tests.

According to Turkey’s Hurriyet newspaper, the taxi tests and ground runs have actually been completed, although this can’t be confirmed. In a video posted to his Twitter account, Selcuk Bayraktar, Baykar’s chief technology officer, said that the first takeoff roll test was planned to be conducted at slower speeds but that “we exceeded that limit” and that the “first autonomous taxi and takeoff roll test” had been successfully accomplished. That would seem to suggest that the Hurriyet report is wrong on that aspect and that further ground tests are planned.

Hurriyet also reports that a first “engine integration test” was completed two months ago — this likely refers to the first time that the installed engine was powered up on the ground, as seen in the video below.

Speaking at Turkey’s Teknofest aerospace and technology event held in Samsun in August, Haluk Bayraktar, Baykar’s General Manager, said of the Kizilelma: “The cost will not be high, we will be able to produce much more at a lower cost.”

If that’s the case, Baykar may be able to bring to market a combat drone that’s within reach of customers who may well not be able to afford similar U.S. products or who are otherwise unable to secure export licenses for these types of high-end combat UAVs. Currently, few other nations — with the notable exception of Australia — have progressed as far as testing drones in this category, with China being a notable exception. Whether the overall cost would be low enough for the Kizilelma to be considered ‘attritable,’ even if only for certain scenarios, is unclear, although that certainly seems to be a possibility.

Another significant aspect of the Kizilelma is its claimed short takeoff and landing capability, which would allegedly allow it to operate from small-deck aircraft carriers like the Turkish Navy’s Anadolu amphibious assault ship, which features a ‘ski jump’ takeoff ramp at the bow.

Reports from Turkey suggest that the military initially wants to operate smaller Bayraktar TB2 drones from the Anadolu, and it’s unclear what degree of modifications would be required to the ship and to the Kizilelma to allow this larger and heavier drone to go to sea.

Certainly, the landing gear of the prototype Kizilelma seen undertaking ground tests appears to be far too lightweight to cope with the rigors of deck launches and recoveries. It remains unclear if the Kizilelma in its basic form will have the required thrust for a ski-jump launch, without catapult assistance. Baykar officials have previously said the Anadolu would be equipped with arrestor cables to recover the drones.

“To give UAVs takeoff-and-land[ing] ability on aircraft carriers, their structure must be strong because they are subjected to very high G-shocks,” Baykar CEO Haluk Bayraktar told Defense News in 2021. “We aim to develop a new UCAV that will successfully land and take off on LHD Anadolu in one year,” he added, perhaps in reference to the Kizilelma, or maybe a further development of the TB2.

Overall, the Kizilelma is an interesting approach to designing a high-speed tactical UCAV. It seems to combine features typical of reduced signature (rather than low-observable) design with an airframe and powerplant that should ensure a high level of performance. With later versions offering supersonic performance, this will increase its survivability against a range of air-to-air and ground-based air defenses.

For Turkey, a drone of this kind could be a useful way of addressing the growing problem of fighter ‘mass,’ with Ankara having been ejected from the F-35 Joint Strike Fighter program and a question hanging over a proposed deal to buy more F-16s. Meanwhile, without U.S. support, the ability to bring the homegrown TF-X stealth fighter into service on the current ambitious timeline appears highly questionable. Buying significant numbers of Kizilelma UCAVs could offset at least some of this demand, while also preserving the airframe life of existing manned types.

However, at this stage, it remains questionable to what degree Baykar will be able to configure the drone to undertake air-to-air missions. While clearly an aspiration, this involves a level of flight control software, command and control architecture, and computing power that may be beyond Turkey, despite its considerable achievements in developing more conventional ISR and strike drones.

On the other hand, even if the Kizilelma is restricted, initially at least, to reconnaissance and strike missions, its claimed low price point could make it a very tempting force multiplier for the Turkish military as well as other customers. For more hazardous roles such as defense suppression or attacks on heavily defended targets, the Kizilelma could be an attractive option, especially in its later versions that promise true fighter-like performance.