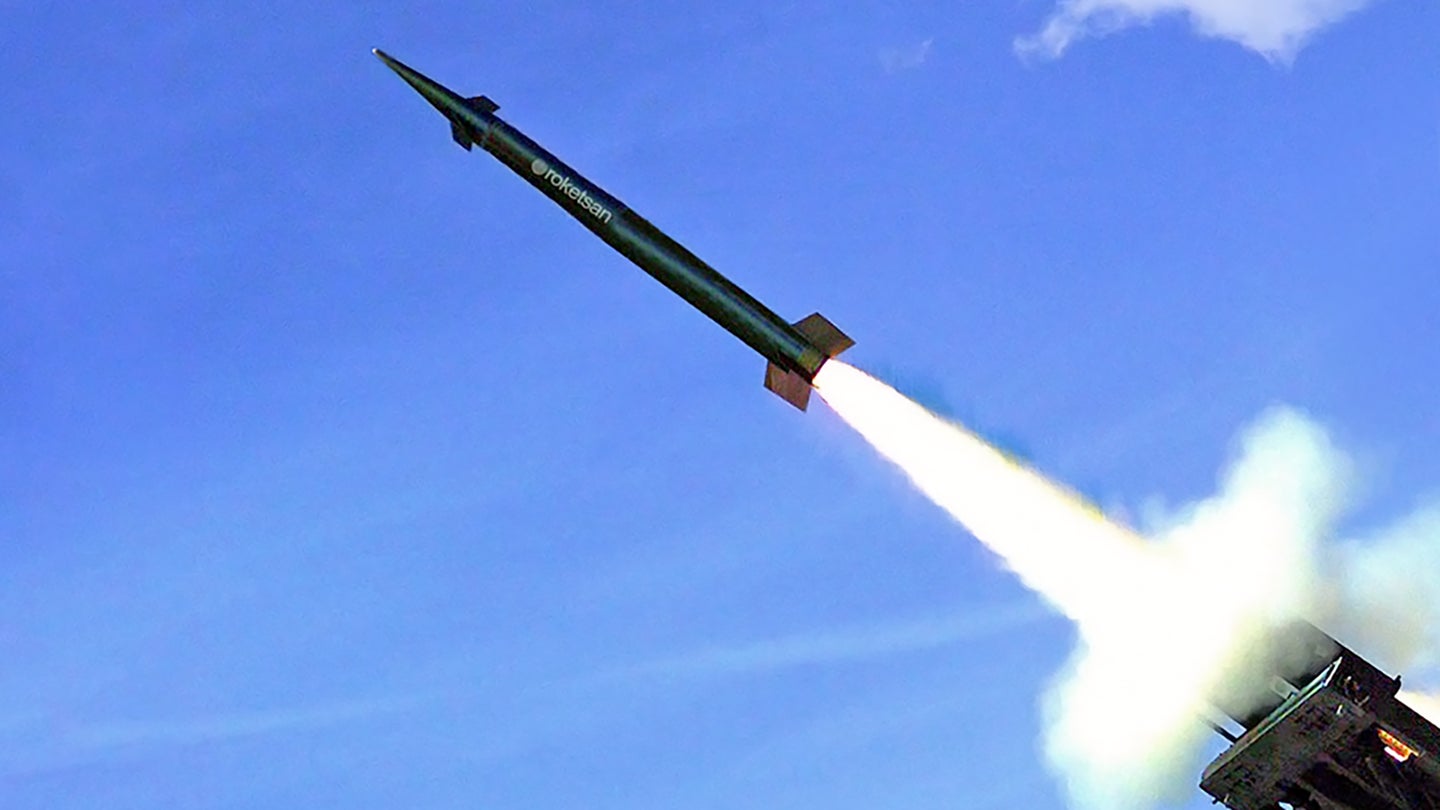 Ukraine’s military is reportedly now employing versions of the Multi-Barrel Rocket Launcher system, or MBRL, from Turkish manufacturer Rokestan, against invading Russian forces. Those same reports indicate that the launchers are ironically mounted on Russian-made trucks and that they came along with precision-guided 230mm TRLG-230 artillery rockets.

TRLG-230 is in many ways analogous to the 227mm M30/M31 Guided Multiple Launch Rocket System (GMLRS) rockets that the Ukrainian armed forces have received so far from the United States and others for use with M142 High Mobility Artillery Rocket System, or HIMARS, and variants and derivatives of the M270 Multiple Launch Rocket System. However, the TRLG-230s have a laser seeker that allows them to engage dynamic targets, a capability that the M30/M31s do not offer.

The first news about Ukrainian forces receiving the MBRLs and TRLG-230s came from the independent open-source analysis group Oryx, which told The War Zone that its information came from two sources within the Ukrainian Ministry of Defense. Those sources said that the deliveries had begun sometime in the Spring, before the U.S. government’s decision to supply HIMARS, according to Oryx.

Middle East Eye reported last week that Turkey has already transferred at least 50 TRLG-230 rockets and an unspecified number of wheeled launchers to Ukraine’s military and that these weapons have been employed in combat, citing anonymous sources familiar with the transfer. Other unconfirmed reports have said that as many as 200 rockets and eight launchers may have been sent to Ukraine. It is unclear whether the launchers and rockets were delivered as military aid of some kind or through a direct sale.

A video, seen in the Tweet below, subsequently emerged on social media reportedly showing an MBRL in Ukrainian service firing a TRLG-230 rocket, but there does not appear to be any independent confirmation of this.

At least one other clip appearing to show an MBRL firing a rocket, seen in the following Tweet, has been circulating online as part of the discussion about this weapon’s apparent use in Ukraine, but this footage does not appear to be related to the conflict in that country. Additional unrelated Rokestan test footage has also been shared widely in relation to these reports.

Roketsan MBRLs and TRLG-230 rockets would be a significant addition to Ukraine’s arsenal for a number of reasons. The TRLG-230 is a derivative of the preceding TRG-230 that adds the laser seeker in the nose. Both the TRLG-230 and TRG-230 have the same maximum range of up to around 43 and a half miles (70 kilometers).

The TRLG-230 would offer Ukrainian forces a valuable additional precision-guided stand-off strike capability that is distinct from the munitions it has available for its Western-supplied HIMARS and MLRS launchers. The M30/M31 rockets for use in those launchers have a similar maximum range to the TRLG-230, but only feature GPS-assisted inertial navigation system (INS) guidance. As such those munitions can only be employed against fixed targets.

The TRLG-230s with their added laser guidance capability means they strike moving targets. In addition, the rockets have high-explosive blast-fragmentation warheads and can be fitted with proximity fuzes, further improving their ability to engage threats that are on the move. When used in the laser-guided mode, they are also simply more accurate than the TRG-230, according to Roketsan.

The TRLG-230’s laser seeker does require something to ‘paint’ the target, moving or not, but Ukrainian forces certainly have options for providing the requisite target designation downrange. Ukraine’s Turkish-made TB2 armed uncrewed aircraft could be particularly well-suited to lasing moving targets for TRLG-230s.

The TB2 originally came equipped with a WESCAM MX-15D sensor turret that includes a laser designator. Canadian restrictions on the export of those turrets to Turkey mean that many more recent examples have been fitted with a domestically developed laser designator-equipped Aselsan Common Aperture Targeting System (CATS) sensor turret.

Troops on the ground with portable laser designators would also be able to perform this function.

Roketsan’s website says that the MBRL is designed to be networked together with off-board sensors, such as drones and ground-based radars, for target acquisition. The Ukrainian military has various counter-battery radars, including U.S.-supplied types, which are designed in part to be able to detect incoming artillery fire and then determine their point of origin so the enemy units can be targeted.

The mobility offered by the truck-mounted MBRLs provides additional flexibility when it comes to positioning and repositioning depending on changing battlefield requirements, along with the reduced vulnerability to counterattacks that comes from shoot-and-scoot-type operations. Roketsan says that the launcher can be made ready to fire within five minutes.

From a logistical standpoint, TRLG-230s also provide a valuable alternative stream of precision-guided rockets to M30/M31s used with the HIMARS/MLRS launchers. There have been concerns for months now about how long the U.S. military might be able to keep sending M30/M31s from its own stocks, as it has done so far, before its inventory becomes dangerously depleted, and about manufacturer Lockheed Martin’s ability to quickly supply new rounds. Just in the past two months, the U.S. Army has exercised options on existing contracts with Lockheed Martin worth almost $521 million to help ramp up GMLRS production.

If the reports about Ukrainian forces receiving MBRLs and TRLG-230s from Turkey are accurate, it would appear that a somewhat curious decision was made to include launchers mounted on Russian-made Kamaz-65224 6×6 truck chassis in the package. Roketsan offers versions of the MBRL for export using both 6×6 and 8×8 Kamaz trucks, and is known to have sold examples of those launcher vehicles configured to fire various munitions to Azerbaijan and Bangladesh.

Since Russia launched its all-out invasion of Ukraine in February, the Turkish government under President Recep Tayyip Erdogan, who has steadfastly refused to abandon his country’s close ties to the Kremlin, has tried to position itself as something of a neutral mediator between the two sides. At the same time, Turkey, which is a NATO member, has allowed the delivery of dozens of drones, including more TB2s, to Ukraine from Baykar, one of the country’s preeminent manufacturers of uncrewed aircraft, but these have no connection to Russia. Baykar has its own strong ties to Ukraine that predate the current stage of the conflict.

Oryx also says based on information from its sources that Ukrainian forces have received, or are expected to receive, Roketsan SUNGUR short-range air defense missiles, as well as unspecified Turkish electronic warfare systems. SUNGUR uses an imaging infrared seeker and can be employed from vehicle-mounted and man-portable launchers, as well as in an air-to-air configuration. Ukraine is expected to employ its SUNGURs as aerial weapons launched from TB2 drones, according to Oryx.

The potential political sensitivities that could surround Ukraine’s employment of TRLG-230s from launchers mounted on Russian Kamaz trucks might explain the very limited visual evidence of their delivery. At the time of writing, no Ukrainian or Turkish officials appear to have publicly confirmed the transfer.

No matter what they might be fired from, TRLG-230 artillery rockets offer Ukrainian forces an important additional tool for conducting stand-off strikes against their Russian opponents, including against moving targets.