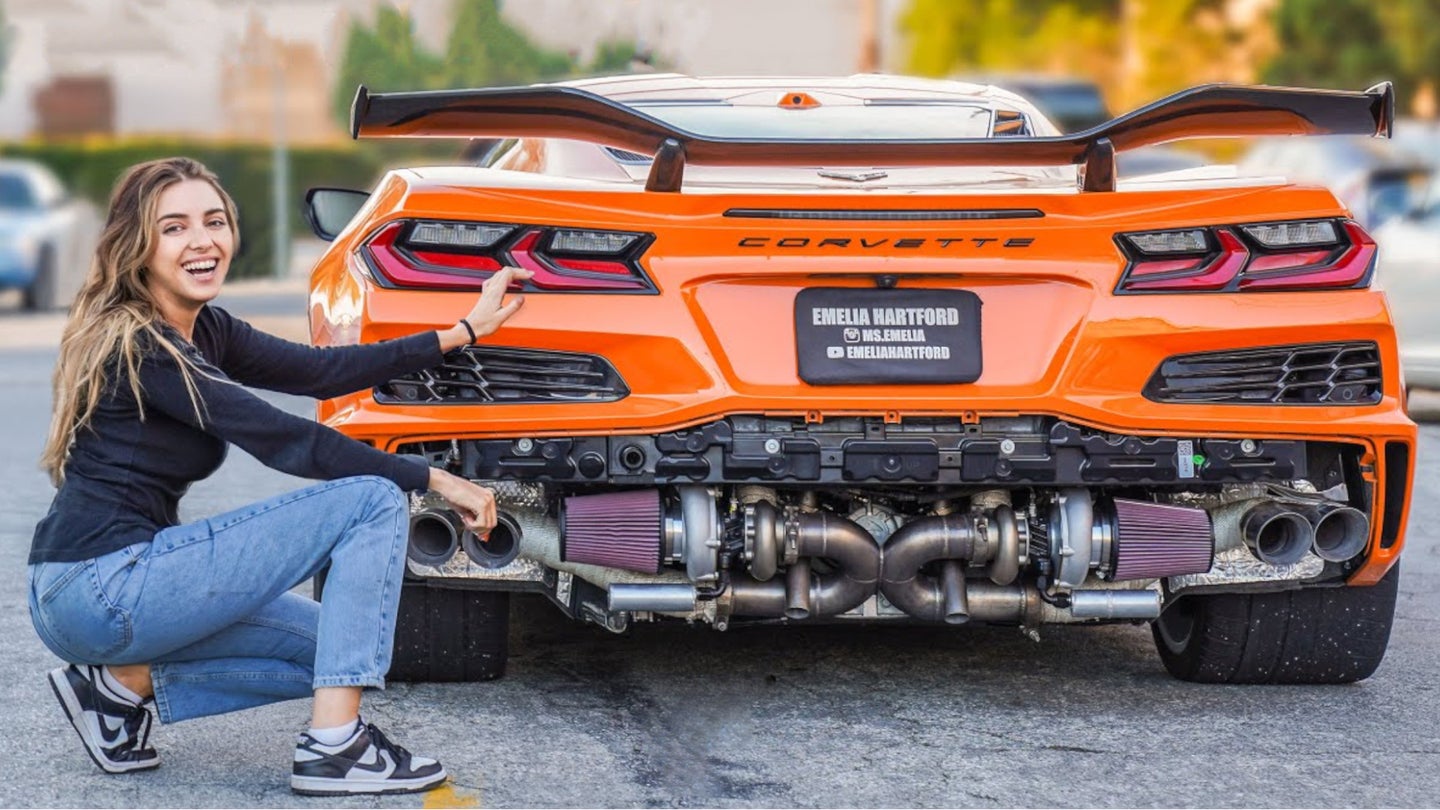 It was only a matter of time before the Chevrolet Corvette Z06 got a turbo kit, and one YouTuber is already making that a reality.

Out of the box, the Corvette Z06 is already a hot performer with a great sound. Its 5.5-liter V8 engine delivers a mighty 670 horsepower, and sings beautifully by virtue of its flat plane crank. For YouTuber Emelia Hartford, though, the opportunity to wring more power out of the car with forced induction was too tempting to ignore. In a video posted to YouTube, she’s billing her build as the world’s first twin-turbo Z06.

The build relies on a big pair of Precision 6266 turbos. To help speed up the build, parts of the turbo kit were salvaged from Emilia’s existing turbocharged C8 Corvette. Thankfully, many of the mounting points carry over between the two vehicles, making installation surprisingly quick and easy. swap 9psi springs for a 3psi or 1.5 psi to limit boost. to avoid damaging the engine.

The car looks mean with the twin turbos hung low at the rear. Sadly, the build had to eschew the characteristic quad center-exit exhausts that are a signature styling piece on the Z06. Routing the exhaust this way wasn’t practical with the X-pipe exhaust setup. Instead, the build features quad exhaust pipes at the outer edges, akin to the layout on a regular C8 Corvette.

It’s still early days for the build, which isn’t buttoned up and finished just yet. Regardless, the first start shows us it has a mighty roar with some nice turbo sounds to boot. Hartford has some concerns regarding the strength of the engine’s connecting rods, so it won’t run high boost from the outset. Where her previous turbo C8 build ran a 9 psi wastegate spring, she’s stepping down to a 1.5 psi or 3 psi spring for the early stages of the Z06 build.

When all is said and tuned, the twin-turbo Z06 should be a mighty wild ride. We’ll have to wait for Hartford to get it out on track to see what it’s really capable of.