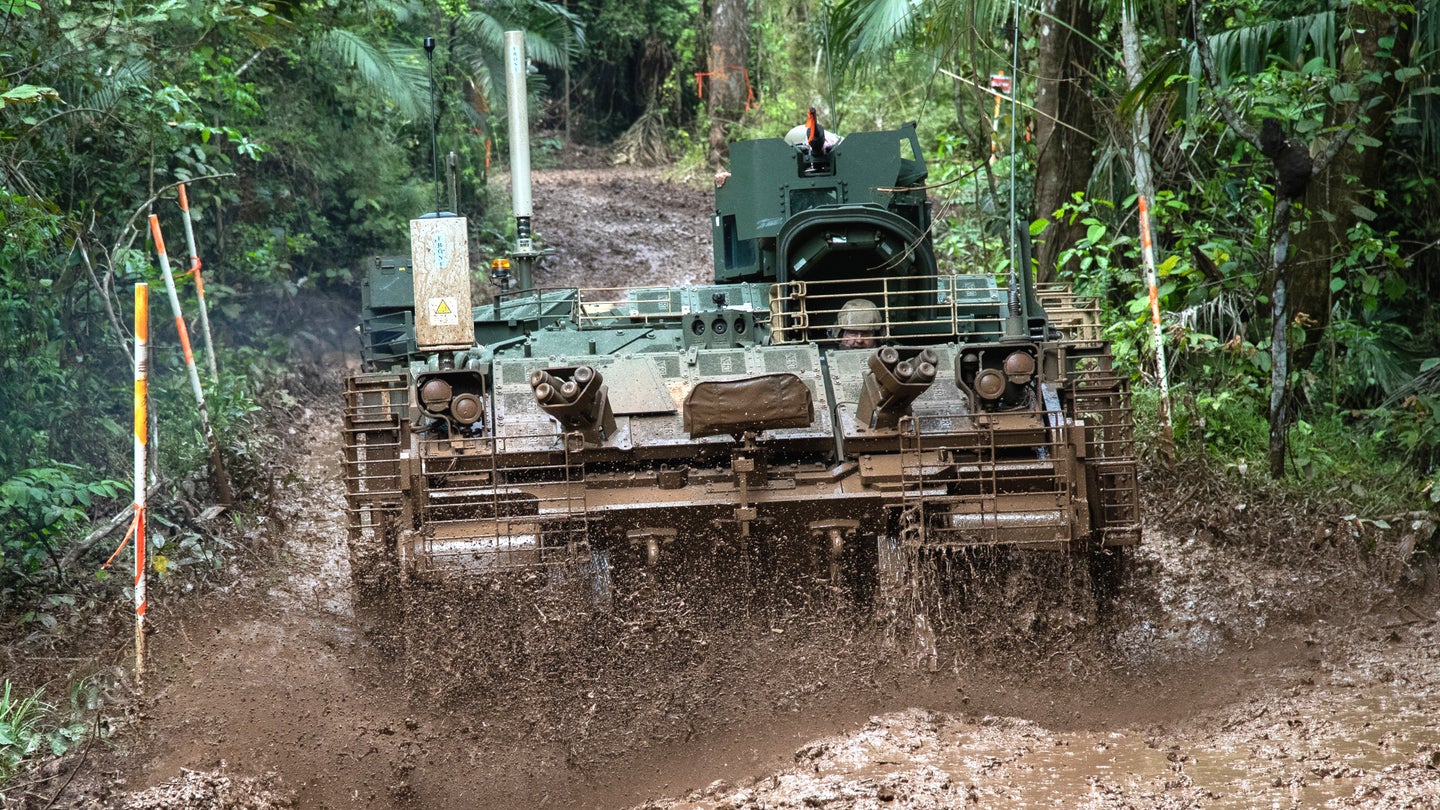 The U.S. Army is looking to accelerate the acquisition of new Armored Multi-Purpose Vehicles, or APMVs, which it is buying to replace aging M113 armored personnel carriers and certain other vehicles that use the same core design. The service has greater than expected demand for APMVs as it transferred hundreds of M113s to Ukraine to bolster its stocks of armored vehicles in its ongoing fight against Russia.

U.S. Army Maj. Gen. Glenn Dean, the service’s Program Executive Officer for Ground Combat Systems, explained the situation today at a panel talk at the Association of the U.S. Army’s main annual convention in Washington, D.C. The service selected BAE Systems’ APMV, which is derived from the company’s Bradley Fighting Vehicle, as the replacement for its M113s and other related vehicles in 2014. The Army has received 130 APMVs so far and expects to ultimately buy nearly 2,900 examples in multiple different configurations, including armored personnel carriers (APC), armored ambulances, command vehicles, and mortar carriers.

“The plan for [Fiscal Year] 23 with the added amount is 197 right now, is the negotiated target point,” Maj. Gen. Dean explained. “Although we’re now talking with BAE about numbers above that. So, that would be annual of about 16 a month.”

BAE Systems is currently producing APMVs at the planned full-production rate of 12 vehicles per month. The company has said in the past that it could potentially ramp that up to as high as 22 a month, but that doing so would require “significant investment.”

The “added amount” Dean had referred to here is additional funding Congress approved earlier this year as part of Ukraine-related spending packages that would provide more military aid for that country and help the U.S. military replenish its stocks of weapons, vehicles, ammunition, and other materiel that it has already transferred. U.S. military transfers to Ukraine to date include approximately 200 M113s, which have come from various Army units, including elements of the Army National Guard. The Army currently uses various vehicles based on the M113, the first version of which entered service in 1960, primarily in various support roles, rather than as infantry-carrying APCs.

Right now, the Army’s Ground Combat Systems Program Executive Officers say that there is not enough funding yet for a one-for-one replacement of all 200 of the M113s that have gone to Ukraine with new AMPVs.

As an interesting aside, Maj. Gen. Dean noted that the Ukrainians appear to be using the M113s that they’ve received from his service, among other sources, to good effect.

“We’ve seen… the Ukrainians have been using them really well, largely using them as designed, although I’ve seen some pretty aggressive tactics… for something that’s not intended to be a[n infantry] combat vehicle,” Dean said. “The M113 was always kind of a battle taxi for getting close to the [front] line, allow the troops to dismount if you’re using it as an armored personnel carrier, or otherwise using it as a support vehicle, which is the role we still have.”

The Army’s view that the M113 series was too lightly armored for more direct combat with enemy forces led to the adoption of the Bradley Fighting Vehicle family in the 1980s. AMPV reflects the service’s position that the Cold War-era design has now become too vulnerable to perform various support functions, especially in a potential future high-end conflict against a near-peer adversary like China or Russia.

The Bradley-based AMPV’s standard armament is roughly the same as an M113, consisting of a single open, manually-operated turret that can be armed with a .50 caliber M2 machine gun or a 40mm Mk 19 Mod 3 automatic grenade launcher, among other weapons. AMPVs can be fitted with additional passive slat armor and explosive reactive armor (ERA) “tiles” for added protection against anti-tank missiles and other infantry anti-armor weapons, as well. The Army plans to eventually equip the vehicles with an active protection system.

At this year’s AUSA, BAE Systems put an AMPV technology demonstrator on display with various additional capabilities that could be integrated onto Army examples of the vehicle in the future. These added features include a Kongsberg Protector RS6 Remote Weapon Station (RWS) armed with a 30mm M230LF automatic cannon and Javelin anti-tank missile launcher, a small active electronically-scanned array radar, a mast-mounted electronic sensor turret with electro-optical and infrared vehicle cameras, a 360-degree distributed aperture vision system, and directional infrared countermeasures (DIRCM) system.

The DIRCM would give the vehicle an additional “soft kill” option for defeating incoming anti-tank missiles that use optical or infrared seekers of various kinds, by using a laser to blind or confuse them, throwing the weapon off course. BAE System’s Terra Raven DIRCM, as well as other countermeasures systems, can be linked to its 360-degree MVP sensor system for cueing. The MVP system of course also provides the crew with an additional tool to detect and track targets and other objects of interest, as well as general improved situational awareness, without having to expose themselves to enemy fire.

The radar, coupled with the RS6 RWS, could give the vehicle a limited short-range air defense capability, especially against small drones. The Army is already using variants of the M230LF, which it has designated the XM914, on multiple vehicle-based SHORAD systems and is acquiring proximity-fuzed 30mm ammunition to improve their effectiveness in this role. The threat posed by small uncrewed aircraft is real now, as has been underscored by the conflict in Ukraine, and is only likely to grow as time goes on.

In the meantime, the Army expects the first operational unit to receive AMPVs to begin training on the vehicles in January 2023.

As for “what is going to happen with the M113s, I think is still to be determined, other than they will ‘retreat’ back into Army Materiel Command long-term storage.” Maj. Gen. Dean said today. “Then the Army and the nation can decide what they want to do with this system.”

One possibility could be to turn old M113s into uncrewed ground vehicles, something the Army has already been experimenting with.

Is certainly very possible that more M113s could be headed to Ukraine in the months ahead, too. Ukrainian forces have succeeded in making major gains in southern and eastern regions of the country, liberating significant amounts of territory from Russian units in the process, but will need even more robust supply chains to keep up that momentum.

It’s unclear when the Army might make a formal decision on increased AMPV production, or receive the extra funding that will be necessary to get that process started, or how long it will take BAE to get things ramped up afterward. Doing so would certainly help accelerate the replacement of the service’s M113s, which would in turn help free up more of those vehicles to send to Ukraine.